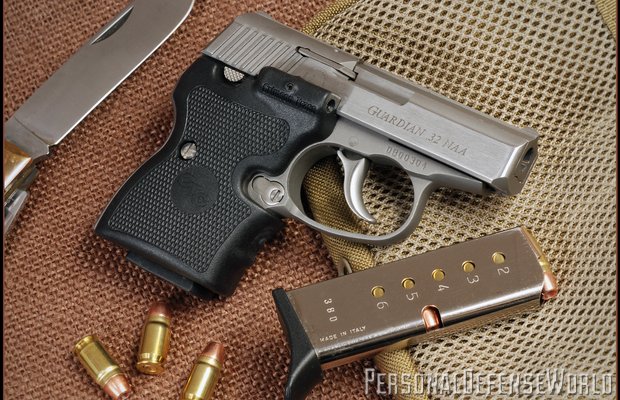 1 of 5
LeadShot2_phatchfinal
The NAA Guardian .32 NAA is an all stainless, double-action-only, pocket auto that is both robust and easy to shoot. 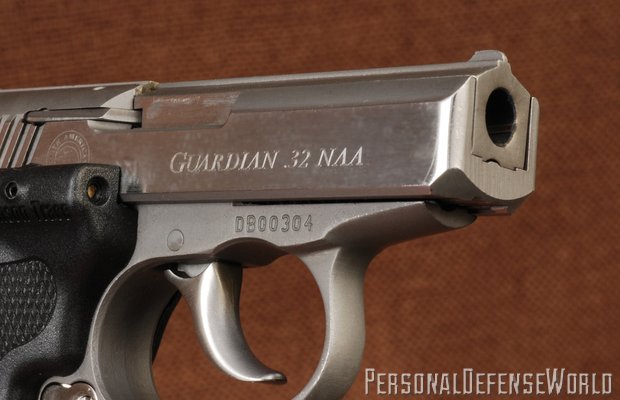 2 of 5
Photo 1 Barrel_phatchfinal
The little pistol is void of any offending edges and corners. The external hammer rests flush with the rear of the slide. Note the minimalistic rear sight and Crimson Trace Lasergrips. 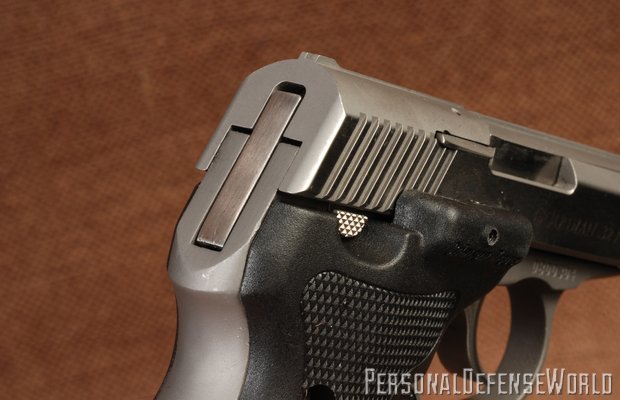 3 of 5
Photo 2 Hammer Rear Sight_phatchfinal
The Guardian has an enlarged triggerguard and a 1911-style magazine release. 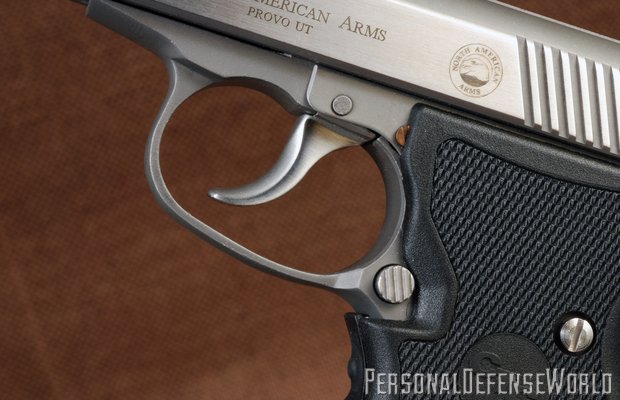 4 of 5
Photo 3 Left Side Mag Release_phatchfinal 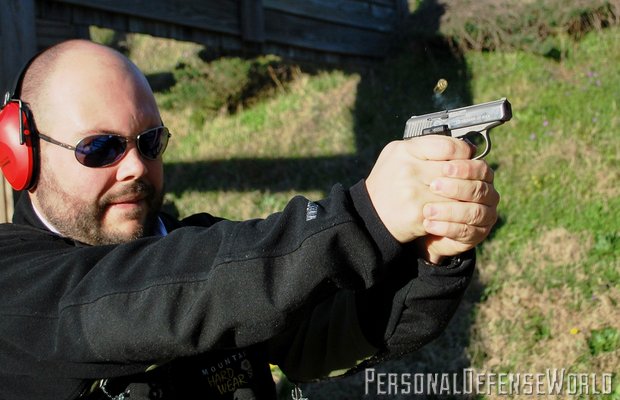 5 of 5
Photo 7 Range Ejection_phatchfinal
n the range, the Guardian was extremely controllable given the ballistics of the .32NAA round. 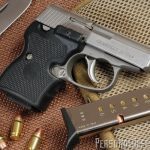 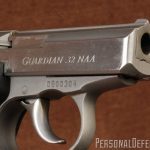 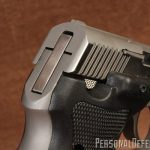 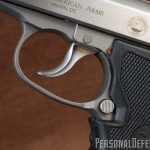 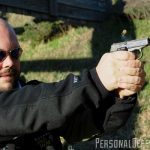 A wise gun guru once opined that, “the best gun for a gunfight is the one you have with you!” Granted, you would not want to go up against five goblins armed with AKs as you carry a .25 ACP. Still, a .25 ACP is better than a sharp stick! Historically, pocket autos have been limited to .22 LR, .25 ACP, .32 ACP, and .380 ACP. While not powerhouses, they are carried by many serious people and have settled many a fight. The old adage, “friends don’t let friends carry mouse guns,” does not always apply.

North American Arms is a company that knows about “mouse guns.” The company was founded in the mid-seventies and has become famous for their little .22 mini-revolvers. The shooting public fell in love with the little single-action pistols and the company now offers over 20 models. In 1997, the company expanded their products to include a .32 ACP mini-auto called the Guardian. Then in 2001, NAA introduced a slightly upscaled version of the Guardian in .380 ACP. The little autos quickly became popular with both law enforcement officers as a back-up or off-duty weapon and with civilians looking for a concealable self defense pistol.

While the .32 ACP and .380 ACP have always been considered marginal for serious self-defense, the size of the pistols chambered in these calibers made them ideal for every day carry. When NAA went looking for a better cartridge, they partnered with CorBon Ammunition. In 2002, the company introduced a supercharged .32 ACP cartridge called the .32 NAA. The .32 NAA is essentially a necked down .380 case that drives a .32 caliber, 60-grain Hornady jacketed hollow point bullet, at 1,222 feet per second (fps) out of the 2.5-inch Guardian barrel. By comparison, the standard .32 ACP, 71-grain FMJ has a velocity of 795 fps and the preferred Winchester Silver Tip runs out at 831 fps.

The .32 NAA Guardian is an all stainless steel, double-action-only, semi-auto that weighs in at almost 13.5 ounces and can best be described as stout. Being under 4.75 inches in length, and just over 3.5 inches in height, it is a tough little pistol. While not completely melted, the Guardian is devoid of any sharp edges that would be offensive during daily carry. The edges of the trigger are polished and the trigger pull measures 11.5 pounds with a total travel length of approximately 1-inch. The Guardian has an exposed hammer that fits flush to the rear of the slide until the trigger is pulled. Unlike some micro pistols, the Guardian’s triggerguard is large enough to accommodate with large fingers. The standard magazine holds 6 rounds and the magazine release is a push style that is located at the rear of the triggerguard in the appropriate location. As an added bonus, NAA also offers a 10-round magazine for the Guardian. Sights on the basic pistol are rudimentary with a very small front and rear sight that is integral to the slide.

The Guardian frames are cast by Pine Tree, a division of Ruger, and are a mono-frame design with the 2.49-inch barrel being machined as part of the frame. The slides are machined in house from a block of 27-4 pH stainless steel. A close examination found that the Guardian does not have traditional frame rails for the slide to ride on. Instead the front of the slide rides under the barrel during recoil while the rear of the slide rides on a small rail located on the takedown lever. The Guardian uses a dual recoil-spring system that is not a captured design like other small autos. Disassembly is accomplished by depressing the takedown button located on the right rear of the frame. The slide is then retracted to the rear and lifted off the frame. The .32 NAA has no ejector and the empty case ejected by the next round that is feeding from the magazine.

The Guardian’s standard grips are a black polymer with a pebble finish and add very little width to the pistol. However, NAA gives the customer a variety of options to include smooth or checkered wood stocks in Cocobolo, Kingwood, Goncalo, and Pau Ferro. Simulated Mother of Pearl is offered in both white and black.

NAA offers the excellent Crimson Trace Lasergrips for the Guardian. I have used Crimson Trace Lasergrips on my S&W J-frames and other pistols for many years. I am a real believer of the product having not only used it on the range, but observed first hand the impact of the red dot on an armed suspect. The CTC Lasergrip for the Guardian mounts the laser, circuitry, and batteries in the right grip while the left grip is kept as thin as possible to assist in concealability. The activation switch is located on the frontstrap just below the base of the triggerguard and is depressed with a proper grip of the pistol. This intuitive activation is what sets CTC apart for the competition. There are no buttons to push, levers to depress, or switches to turn. Simply obtain a proper firing grip and the red dot is projected on the target.

1 of 5
LeadShot2_phatchfinal
The NAA Guardian .32 NAA is an all stainless, double-action-only, pocket auto that is both robust and easy to shoot.

2 of 5
Photo 1 Barrel_phatchfinal
The little pistol is void of any offending edges and corners. The external hammer rests flush with the rear of the slide. Note the minimalistic rear sight and Crimson Trace Lasergrips.

3 of 5
Photo 2 Hammer Rear Sight_phatchfinal
The Guardian has an enlarged triggerguard and a 1911-style magazine release.

4 of 5
Photo 3 Left Side Mag Release_phatchfinal

5 of 5
Photo 7 Range Ejection_phatchfinal
n the range, the Guardian was extremely controllable given the ballistics of the .32NAA round.

On the range, the test pistol was completely reliable with both the FMJ and the JHP personal defense load. Recoil was sharp but contained by the weight of the pistol. For old eyes, the CTC Lasergrips are essential and enabled us to produce fast and accurate shots out past 7 yards. Trigger control is the key to running this little pistol and, while not difficult, practice is needed to get the most out of the platform.

One indication of how successful the Guardian has been is NAA’s own custom shop. The most popular modification to the Guardian is to improve the sights. NAA offers three custom shop sight options. The first is traditional Novak low-profile sights with either white dots or tritium inserts. The second option is XS sights with either a standard or large white bead front sight (with or without tritium) and a shallow express type rear sight. The final option is called a Gutter Snipe and takes its name from the sighting system designed by Paris Theodore for his ASP 9mm combat pistol. The NAA version consists of a narrow channel machined in the top of the slide between the hammer and ejection port. Two tritium inserts are installed on the rear of the slide and index on the third insert located at the front of the channel. No part of the sight channel extends above the lines of the slide making it completely snag free.

Other custom shop options include a meltdown of all edges and stippling of the backstrap, frontstrap, and the front of the triggerguard. The shop will add cocking serrations on the front of the slide or replace the vertical cocking serrations with a scalloped design that is both attractive and functional. For those who want a little more bling, the shop will use a graduated series of buffing wheels and compounds to carefully buff selected parts of the pistol to a highly polished finish. One final option for new guns is the ability for the customer to order a Guardian with a customized serial number.

The weight of the Guardian makes carrying the little pistol a matter of thought. I can tell you that 13.5 ounces of stainless steel will not ride well in a pocket without the proper foundation. On their website, NAA provides a complete line of holsters from well-known makers such as Aker, DeSantis, and Mitch Rosen. These offerings include a DeSantis Belt holster, two IWB rigs, and two pocket holsters. Rosen’s pocket rig is a rough out design made from cowhide while Aker offers a pocket rig is black shark. The prices are very reasonable and it is very convenient having specialty holsters in stock with the manufacturer.

My overall assessment of the Guardian is that it is a well-designed and executed pistol. While thicker and heavier than similar polymer pistols, the Guardian’s stainless steel construction makes it easier to shoot and arguably stronger. My experience with the Guardians left me impressed with NAA’s level of quality and commitment to their customers. The company’s website is one of the most comprehensive website in the industry. Along with operation manuals for their pistols and revolvers, the company provides a complete ballistic table for each caliber. The .32 NAA page provides data on the factory loads as they performed out of a Guardian and even lists the serial numbers of the pistols used in the test. Another page provides eight separate reports from independent tests conducted by H. P. Laboratories. In addition, the accessories, holsters, and custom features provided by the company set them apart from many manufacturers.

The Guardian is a solid, well made, pocket rocket that offers a lot of options for a pocket pistol. With the advances in ammo, and the potential of the .32 NAA caliber, the Guardian is a serious pistol within its class. Those looking for a small self-defense pistol should seriously consider NAA’s many offerings and don’t overlook the options from the Custom Shop. 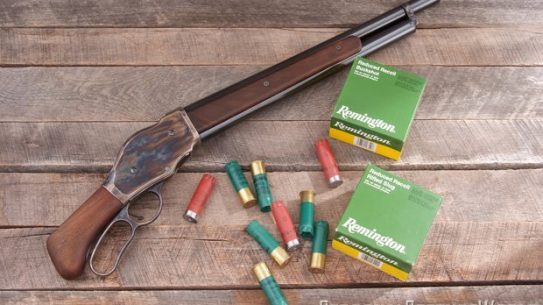 A wise gun guru once opined that, “the best gun for a gunfight is…