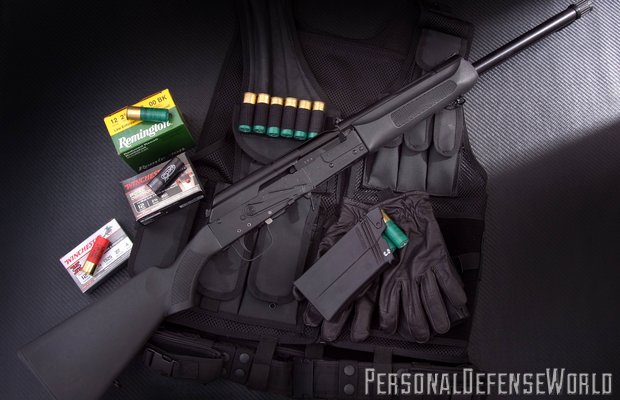 1 of 4
1. LEAD opt. 1_phatchfinal
The Saiga 12 comes with a standard 5-round box mag. This model from Century Arms, built in Russia by Izmash, has a 19-inch chrome-lined, hammer-forged cylinder bore barrel with threaded muzzle. 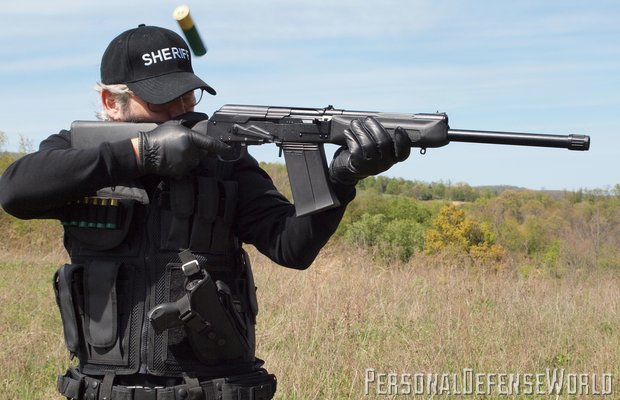 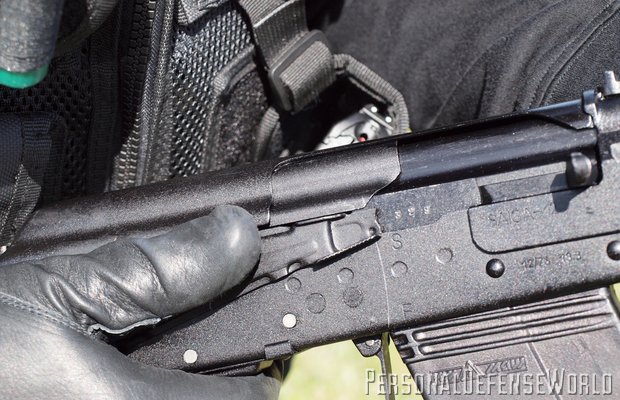 3 of 4
OLYMPUS DIGITAL CAMERA
Close up of the AK-Style Safety Lever; this is large and easily handled even with gloves 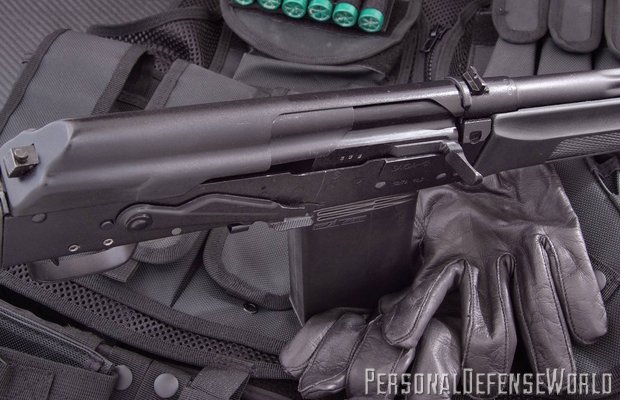 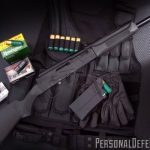 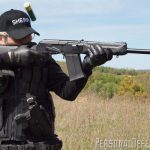 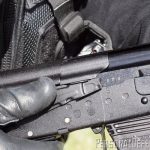 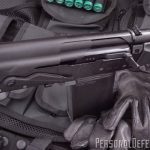 The Kalashnikov or more popularly AK (Avtomat Kalashnikova) has been around for more than half a century and is regarded as one of the most successful semi-automatic and selective-fire combat rifles in history. First adopted by the Soviet military in 1949 as the 7.62mm Kalashnikov assault rifle (AK), it was designed by Mikhail Kalashnikov and put into production in 1947. Over the last 65 years the AK has evolved numerous times from its original blued steel (later stamped steel AKM) receiver and wood shoulder stock, pistol grip and forend to modern versions with black synthetic stocks and matte finished receivers that elevate this vintage Soviet legend into the black gun category—as do the variety of options for stocks, grips, the addition of accessory rails, and distinctive variations like the Century Arms Bullpup.

While semi-automatic civilian AK derivatives are still manufactured in Russia by Izmash, one of the world’s oldest armsmakers, as well as in other countries including the United States, the guns continue to take on a life of their own in seemingly divergent models ranging from .22 LR semi-autos versions to the Izmash Saiga shotgun offered in 12 gauge, 20 gauge and .410 gauge.

The fundamentals of the semi-automatic shotgun predate the Kalashnikov by half a century having been established in 1899 by John M. Browning. The Browning shotgun required neither a lever nor slide-action device to load the next shell, but fired as quickly as one could pull the trigger. It was truly innovative. The Browning Brothers presented two prototype designs for a self-loading shotgun to Winchester president T.G. Bennett just before the turn of the century, but he took until 1902 to reach a decision—and what might have been the beginning of a new era at Winchester turned into an irreconcilable difference between John Browning and T. G. Bennett. Browning had a new stipulation, rather than selling the design outright to Winchester, as Browning Brothers had done since 1885, they wanted a payment against royalties for the use of the design. Bennett turned them down. It was to be one of the worst decisions in Winchester’s history.

John Browning took the design for what would become the A5 semi-automatic shotgun to Fabrique Nationale (F.N.) in Belgium. The Browning semi-auto shotgun, introduced in September 1903, made Winchester’s slide-action shotguns (also designed by Browning) almost obsolete by comparison, although that really wasn’t the case; the two designs appealed to different buyers. Winchester was, nevertheless, conspicuously absent from this new segment of the firearms market. The notoriety of the Browning Auto 5, compounded by the licensing of the design to Remington (Winchester’s largest competitor), forced W.R.A. Co. into developing a competitive self-loading shotgun. With the Browning patent covering every possible design, it took Winchester eight years to come up with its own concept, and it was not overly successful. The short-lived Winchester Model 1911 semiautomatic shotgun was dubbed “the widow maker.” Browning and Remington models eventually led to the design of semiautomatic shotguns by many of the world’s leading manufacturers (including Winchester) and by the end of the 20th century the Kalashnikov 12 gauge would add another chapter to the AK’s history.

It is unrealistic to compare the Saiga 12 with other 12 gauge semi-automatic shotguns (with the exception of new AR-15 based shotguns), like Remingtons, Winchesters, Berettas, or even conventional magazine fed tactical shotguns like the Benelli M4 and Remington 870 A-TACS. The Saiga is, at its heart, an AK-47 and that sets it apart from the rest. Out of the box it is a solidly built shotgun that will perform well both in the field and in the home environment as a self-defense weapon.

The semi-automatic shotgun application for the AK is very modern yet uses the same Kalashnikov gas piston operating system as the 1947 rifle. In terms of design the AK is best described as a hybrid of previous rifle technology; the trigger, double locking lugs and unlocking raceway of the AK are based on the M1 Garand/M1 carbine; the safety mechanism is adapted from the John Browning designed Remington Model 8 rifle; and the gas system and layout are similar to the World War II German Sturmgewehr 44, regarded by military arms historians as the first assault rifle. Kalashnikov and his design engineers in Russia had all of these weapons at their disposal during WWII to deconstruct and analyze while developing the AK-47. As Kalashnikov once put it, there was no need to “reinvent the wheel,” noting that “…Each designer seems to have his own paths, his own successes and failures. But one thing is clear: before attempting to create something new, it is vital to have a good appreciation of everything that already exists in this field. I myself have had many experiences confirming this to be so.” Was the Sturmgewehr 44 the basis for the AK-47 as some historians suggest? There are certain similarities, but more than half a century later only the AK has withstood the test of time to remain a modern-day weapon still in use by more than 100 countries the world over. The Izmash Saiga shotgun is just another logical progression of the Kalashnikov design.

1 of 4
1. LEAD opt. 1_phatchfinal
The Saiga 12 comes with a standard 5-round box mag. This model from Century Arms, built in Russia by Izmash, has a 19-inch chrome-lined, hammer-forged cylinder bore barrel with threaded muzzle.

3 of 4
OLYMPUS DIGITAL CAMERA
Close up of the AK-Style Safety Lever; this is large and easily handled even with gloves

The Saiga 12 is almost identical to an AK rifle except for the barrel size, chamber, box magazine, and enlarged ejection port, while incorporating all of the advantages of the Kalashnikov design; simple construction, fairly compact size and adaptation to mass production, ease of cleaning and maintenance with a large gas piston and generous clearances between moving parts. This actually makes the AK a more accurate shotgun than it does a rifle!

Operating features are the same as the rifle, and there are several variations beginning with the standard sporting model shown with pistol grip shoulder stock. Versions are also available with a receiver mounted pistol grip and folding stock, a removable stock and pistol grip, and specially equipped tactical models with collapsible shoulder stocks and quad rail handguards.

The standard model tested, has a chrome-lined, hammer-forged 19-inch cylinder bore 12 gauge barrel, and is chambered to accept 2¾- and 3-inch Mag (70mm and 76mm) shotshells or slugs. All Saiga models use a matte black finish stamped steel receiver with the recognizable Kalashnikov large lever safety on the right side, black impact resistant polymer shoulder stock and handguard (rather than wood). With full stock they measure 41 inches and weigh 7.9 pounds empty. The Saiga 12 is comparatively light for a semi-automatic shotgun and fundamentally being a military rifle is very well balanced. The threaded 19-inch barrel (will accept various choke tubes and flash suppressor Poly Choke) is ideally suited for home protection use even with the full stock. The Saiga 12 employs the same gas operation as the AK and comes with one standard 5-round box magazine (extra magazines sell for $19.87); 2- 10- and 12-round magazines, larger capacity rotary magazines, and choke tubes, are all available.

Bear in mind that even though this is a full stock shotgun, the 19-inch barrel is only 0.5 inches longer than the average tactical shotgun or a legal sawed off shotgun. To put the Saiga through a thorough defensive test, full size Speedwell B27 silhouette targets were set up at distances of 7 yards and 25 yards. Ammunition was Remington Law Enforcement Reduced recoil 2¾-inch 00 buckshot, Remington Law Enforcement Reduced recoil 2¾-inch, 1-ounce Rifled Slugs, Winchester 2¾-inch No. 4 buckshot, and new 2¾-inch inch PDX1 12 Defender (one 1-ounce rifled slug and three plated 00 buckshot).

Recoil with all loads except Winchester PDX1 12 Defender was modest with the PDX 1 delivering recoil equivalent to a 3-inch magnum. The Saiga was loaded with specifically mixed shells based on law enforcement and military defensive and offensive tactics. With a maximum five round capacity (as tested) the loading order (reverse of firing order) for the first test at 7 yards was two Remington Law Enforcement Reduced recoil 2¾-inch 00 buckshot, two Remington Law Enforcement Reduced Recoil 2-3/4-inch 1-ounce Rifled Slugs, and one Winchester 2¾-inch No. 4 buckshot. Therefore, the first round discharged was No. 4 Buckshot (27 pellets and greater dispersal), followed by two slugs, and two 00 buckshot. Trigger pull on the test gun averaged 7.8 ounces. The best total grouping from five assorted rounds (as listed) all struck in center body mass in the 8, 9, 10 and X with slugs striking in the 9 and 10 rings.

The second test at 7-yards was a defensive load comprised of five Winchester PDX1 12 Defender shells. This is a far more demanding round that delivers significant recoil but also decisive accuracy shot for shot, with all major hits (slugs) within the 10 and X and pellets closely grouping in the 8 and 9 rings chest high. In discussions with ammunition experts like Michael Bussard, (whose name is attached to a number of historic rifle, pistol, and shotgun cartridge developments over the last quarter century, and as author of the Ammo Encyclopedia), the order in which shot shells are selected and loaded in a repeating shotgun, be it pump or semi-auto, is dependent upon specific needs, i.e., what law enforcement officers or the military use in close quarter situations, vs. what an individual can effectively handle during a home invasion. There is, however, something for civilian users to learn from law enforcement and military tactics, says Bussard, who favors using two rifled slugs as the first two rounds discharged followed by 00 Buckshot. This was the combination used for the third range test at 25 yards which was fired at 1 second intervals. Both slugs struck in the 9 ring at the 5 o’clock and 6 o’clock positions, with the three 00 buckshot rounds covering central body mass across the 8, 9, and 10 rings and abdomen across the width of the 8 ring. Two 00 pellets struck shoulder high in the 7 ring. Overall, for close quarter combat the Winchester PDX1 12 Defender showed a decided advantage combining the best aspects of a slug and 00 buckshot in one round. A rapid fire test was conducted to examine the Saiga 12’s cycle rate. Three rounds of 00 were discharged as quickly as possible (under 2 seconds) and I was unable to out race the cycle time. There were no jams or any mechanical issues with the Saiga throughout the 100-round range test.

The idea in any loading scenario is to end the confrontation as quickly as possible. No theory, however, can fully take into account all possible situations (such as family members within close proximity to the threat, which may make a shotgun impractical) or any one individual’s emotional reaction to an armed home invasion—but the use of a shotgun is one of the most effective means of resolving the situation in most cases. The Saiga 12, with multiple capacity magazines, offers one of the most varied and effective semiautomatic alternatives on the market. Find out more by calling 800-527-1252 or by visiting centuryarms.com. 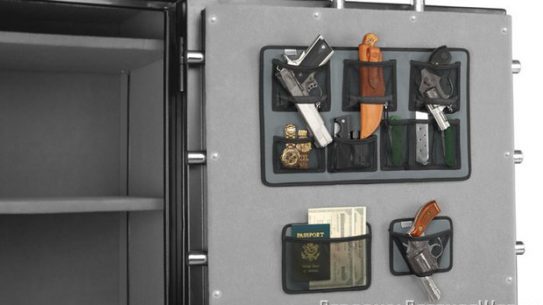