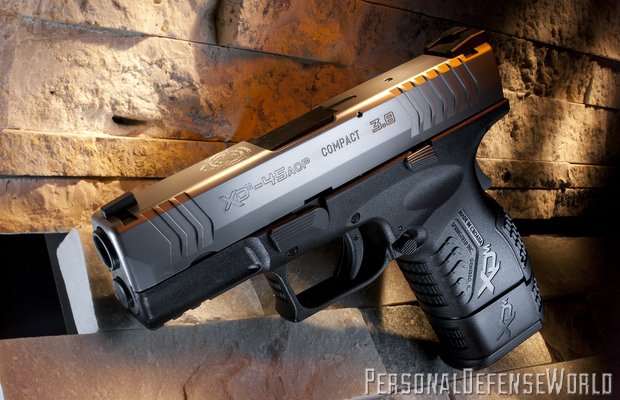 1 of 5
_DSC6332_phatchfinal
Quickly becoming a favorite among shooters, the Springfield XDm 3.8 compact in .45 ACP performs on par with a full-size weapon and sports a myriad of user-friendly features. 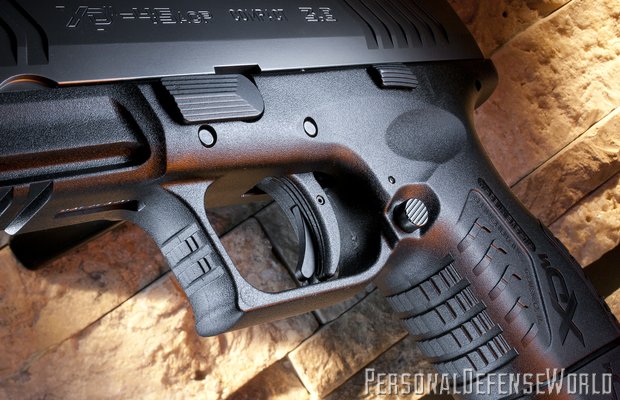 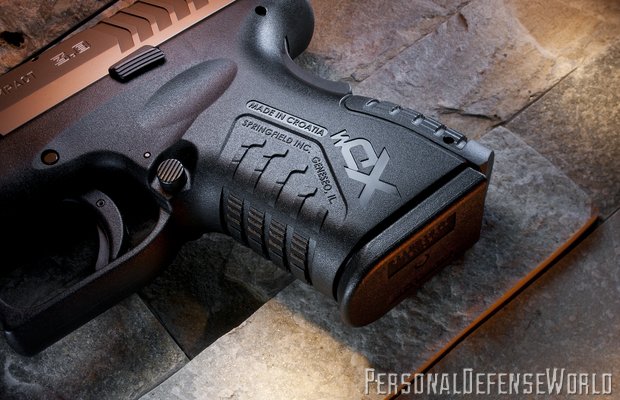 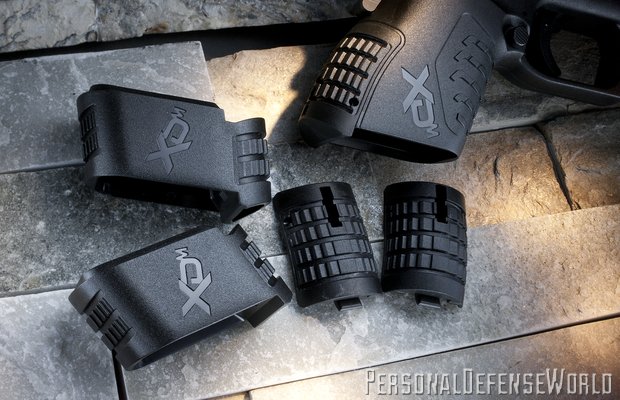 4 of 5
_DSC6344_phatchfinal
Interchangeable backstraps and mag extensions allow for a comfortable, customized grip. 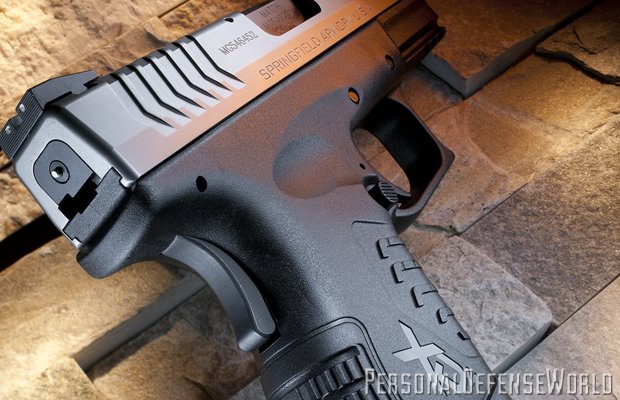 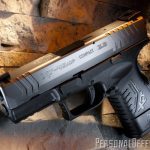 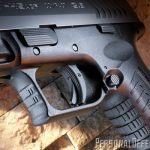 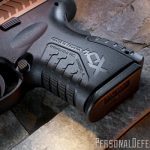 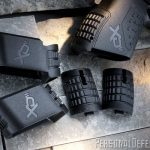 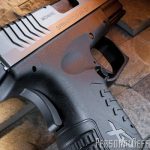 The opportunity to travel throughout the country attending training provides tremendous insight into the trends of the pistol world. An ever-increasing trend is the use of the Springfield Armory compact XDM pistols—and most who use them really like them. Every pistol has its detractors, but in the case of the XDM it seldom comes from those who actually use them.

A perfect example is the CorBon pistol school my wife and I attended a few months ago. Most in this class were very new to combat pistols, with some having never used one before. The pace of the class was perfectly suited to beginners trying out the pistols they may have purchased for concealed carry. One such shooter had an XDM compact chambered in .40 caliber. Short pistols can be a handful and are often discouraged—especially at this level—but this young lady had been given this pistol by her husband for self-protection and wanted to see if she could handle it. To my surprise she was incredibly accurate, never had a single issue and turned out to be one of the best shooters in the class. She told me it had no more recoil than the full-sized pistol she had been borrowing and she actually felt it was easier to shoot. Accuracy was not an issue, as she regularly kept shots at 25 yards in the 3-inch range. Having seen seasoned officers shoot about half as well with similar pistols, it was a great testament to the pistol’s design.

So, when the opportunity came up to test the new XDM in .45 ACP it was accepted with significant anticipation. After seeing that compact .40 caliber in action I really wanted to put the .45 ACP through its paces.

Springfield Armory has done a really nice job with these pistols, providing what many who carry concealed have asked for—which is why it is such a popular line. When attending training as a writer, we are often supplied pistols. At a recent event a fellow writer and retired police officer stated, “Man, I sure miss my XD, I love shooting that pistol.”

Much of that popularity is due to the ergonomics of the pistol. Another is Springfield Armory’s willingness to provide more for less. These pistols come with everything you need to carry concealed—except the ammunition. A Kydex holster and magazine pouch and two magazines are provided as well as a number of extras, allowing me to complete the testing with nothing other than what came in the box.

Gun Details
The pistol supplied for testing was a bi-tone compact. The slide is stainless steel while the lower remains black. It is packaged in a very high-quality hardcase designed to fit every accessory provided. Both a holster and double magazine pouch are provided. The holster is a paddle, allowing for easy concealed carry use. The magazine pouch is a belt slide with rail mounts on either side. This allows the attachment of the nifty hand loader, which is part of the package. There are two magazines—a 13-round full-sized mag that offers a full-sized grip, and a flush fit mag that carries 9 rounds of .45 ACP. There are spacers so any other full-sized magazines can be fitted for use with this pistol. Three total cutouts are available for magazines allowing you to keep three full-sized magazines and one flush fit in the package. There are two more grip straps that allow for comfortable fit of different-sized hands. There is also a cleaning brush and gunlock.

1 of 5
_DSC6332_phatchfinal
Quickly becoming a favorite among shooters, the Springfield XDm 3.8 compact in .45 ACP performs on par with a full-size weapon and sports a myriad of user-friendly features.

4 of 5
_DSC6344_phatchfinal
Interchangeable backstraps and mag extensions allow for a comfortable, customized grip.

As an XDM this pistol has all the features of the line. A rail is supplied for attaching lights and lasers. The magazine release is ambidextrous and easily accessible. The slide release is placed where one-handed operation is simple and easy. The sights are of a no-snag design and included easily seen white dots. They can also be ordered with Tritium or fiber optic inserts. A really nice touch is the loaded chamber indicator. A small lever on top of the slide pops up when a round is in the chamber, allowing you to check in the dark without having to take the pistol out of battery. Three interchangeable backstraps are provided to fit most any hand. The grip straps and frontstrap are aggressively checkered for a solid grip. The high cut grip and square triggerguard houses a crisp and predictable trigger. In terms of factory polymer pistols this trigger is excellent. It is smooth with a short take-up and reset. It really facilitates accuracy and fast follow-up shots. A match-grade barrel is fitted along with a captured dual return spring.

Disassembly is very simple and pressing the trigger prior to removal of the slide is not necessary. Simply lock the slide open, push up the disassembly lever, release the slide and it comes right off; reverse the process for assembly. Cocking serrations are provided at both the front and rear. Lastly, the grip safety prevents not only activation of the trigger, but movement of the slide to the rear.

Given what had been seen with the .40 caliber version, wielded by a new shooter, the expectations were high. Given the short barrel and grip the pistol was tested at 15 yards. The short magazine was used to simulate concealed carry. For the most part this pistol simply cut one large hole no matter what ammunition was fired through it. Although the Winchester PDX1 Bonded produced the best group at 0.66 inches, nothing went much outside an inch. Most of this is attributed to the lack of felt recoil for such a small pistol. It really felt little different than shooting a full-sized pistol, even with the flush magazine. Inserting the full-sized magazine just locked this pistol into place. Even the accuracy on my El Presidente drills was excellent. Moving at a brisk but not blazing speed, all hits were in the “A” zone. First shots after the draw were also dead on. This is truly an accurate pistol and allows most shooters to be accurate. It really brought my experience with the .40 caliber compact at CorBon’s Law Enforcement Training Center into perspective. This is just a very easy pistol to shoot accurately.

All of the testing was completed using the supplied holster. Although not a big fan of paddle holsters, this one stayed in place without issue. Once locked onto my belt it never came loose, moved, or more importantly came out with the pistol on the draw. The magazine pouch held the magazine securely and facilitated fast magazine changes.

The pistol was fired from a barricade, on the move, and around my truck. The shorter barrel makes movement around objects easy, and it never missed a beat. This pistol fed everything without issue. There were no malfunctions and the magazines experienced no issues even after several drops on the concrete and the gravel. The ambidextrous magazine release worried me at first, but it never activated during shooting or the draw. Truth is the fact it was even there was forgotten quite quickly. Given no accidental activation this feature could come in very handy.

The trigger is one of the things owners of this pistol really like. There is no disagreement here. It is predictable and the take-up is minimal with very little stacking. The reset is commensurate with many of my 1911 pistols and facilitates fast follow up shots. All in all, it was truly a joy to shoot and a ton of fun to test.

Detractors of this pistol decry the grip safety. Granted, 1911 pistols are the norm for me, but once the fun started it might as well have been absent. Very little grip pressure is necessary to activate it and it does provide a nice peace of mind for those worried about getting a trigger snagged on clothing or duty officers carrying exposed. Many agencies and even a few states require some sort of mechanical safety, and this one fits the bill nicely. Activation is intuitive, removing the need to add another step for those unaccustomed to removing a thump safety.

All in all this was an impressive little pistol. It was very controllable and recoil was minimal even with higher-pressure loads. The ergonomics are excellent and it was about as accurate as you can make a combat pistol. It is clear why this has become such a popular pistol. If a compact .45 ACP is on the wish list, then make sure you take a close look at the XDM 3.8 Compact .45 ACP—it may be the best choice you can make. For more information call 800-680-6866 or visit springfield-armory.com. 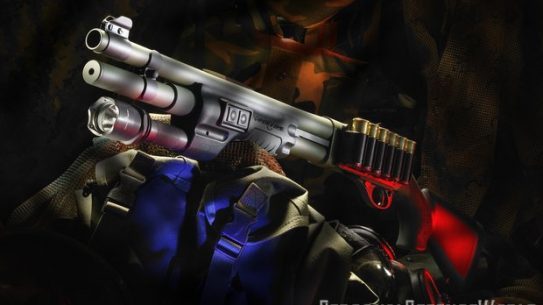