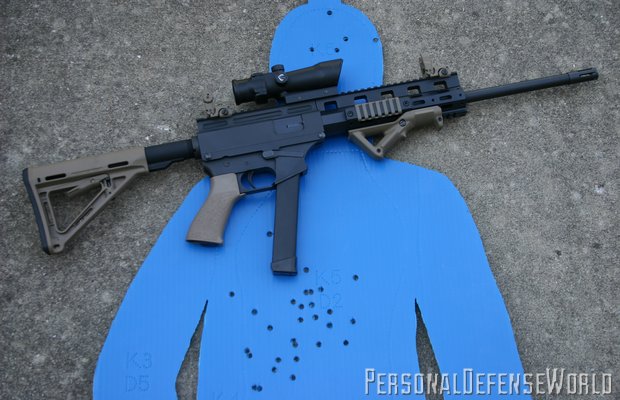 1 of 3
Thureon Defense Carbine 164_phatchfinal
Here you can see the results of the 33 round combat/reliability course. Shooting was done using the Bushnell red dot sight; other than the head shots, point of aim was center mass and there were no malfunctions. 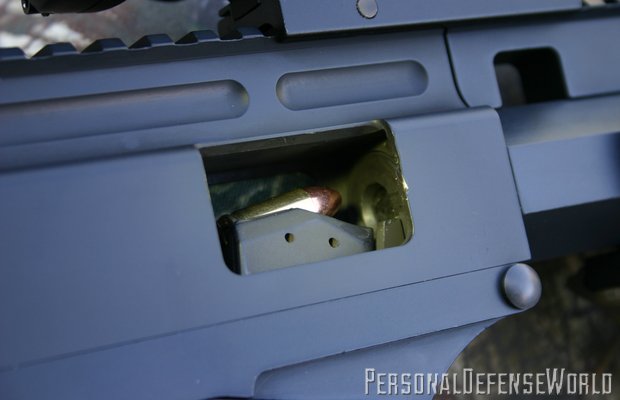 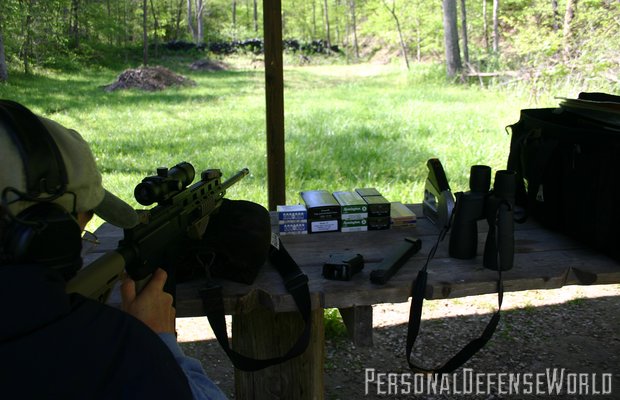 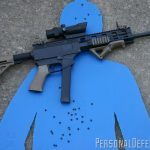 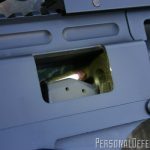 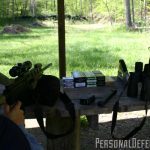 Long guns chambering cartridges suitable for handguns have had a long history in the United States. Self-contained, metallic cartridges had only been around a few years when in 1873 Winchester came out with their Model 73 rifle and carbine that chambered a .44 caliber center-fire cartridge appropriately called the .44 WCF (.44-40) Winchester. The Model 73 was a success and Colt, noting the length of the .44 WCF was about the same as that of the .45 Colt, came out with a version of the Single Action Army revolver in this chambering that was christened the Colt Frontier Six Shooter. Now one could pack a side arm and a long gun that chambered the same cartridge—a real advantage when all you could carry was what would fit in your saddle bags or on your belt. Colt and Winchester would do the same with the .38-40 and .32-20 cartridges and later Winchester updated their line with the Model 92 that took the same 3 loads.

At the turn of the 20th Century semi-automatic pistols were introduced and one of the first long guns firing a pistol caliber was the Italian Villar-Perosa machine gun of WWI that chambered the 9mm Glisenti round. By the end of the Great War sub-machine guns in pistol calibers were being produced, the most notable was the Thompson in .45 ACP. The mid-30’s saw the bolt-action, Spanish Destroyer Carbine in 9mm Largo being used by the Guardia Civil in Spain. Pistol caliber carbines became increasingly popular for several reasons. They had less recoil than full-size rifles or shotguns, plus you could do the “cowboy thing” and again have a handgun and long gun that chambered the same ammo. Pistol cartridges are also generally less expensive so you get more “bang for the buck.” Makers of popular sub-machine guns also made semi-auto versions with legal length (16”) barrels to entice commercial sales. Thus today many pistol-caliber carbines look like an MP-5, UZI, Thompson, etc. Select-fire carbines like the AR-15 were also produced in calibers like 9mm Luger for agencies who wanted a less powerful round in a patrol carbine.

Thureon Defense, a Wisconsin-based manufacturer, introduced an AR-looking pistol-caliber carbine in 2010. Initially it was offered in 9mm (9×19 NATO) but can now be had in .357 SIG, .40 S&W, 10mm and .45 ACP as the GA Model that uses Glock pistol magazines. An SA Model is also available that chambers 9mm NATO and .45 ACP, but uses UZI-type magazines. The action is a blowback in operation, firing from a closed bolt; and the bolt assembly extends rearward to act on what in a regular AR rifle is the buffer spring nestled inside the buttstock tube. Moving parts are kept to a minimum and total parts count is fairly low, with major components robust in size. I liked the concept and thought the quality and construction a step or two above what I’d seen on other moderately priced pistol-caliber carbines.

The carbine tested was in 9mm NATO and came with two 33-round Glock magazines. It appears that the GA Model version I had in my possession seemed a collaboration with Magpul, makers of all kinds of accessories and parts for AR’s and other firearms. Starting from the rear, my carbine had a Magpul MOE (Magpul Original Equipment) adjustable-length carbine stock; the pistol grip appears to be a standard MOE with textured side-panels and serrated front- and backstraps. On the bottom rail of the handguard was a Magpul AFG (Angled Fore-Grip), plus the handguard side-rails had short, low-profile rail covers. On the integral upper receiver rail was attached a flip-up Magpul MBUS (Magpul Backup Sight) Gen II fully adjustable peep sight and on the top handguard rail, near the muzzle was an MBUS flip-up front sight. All of the Magpul accessory parts were in “Dark Earth” which contrasted nicely with the matte black finish on all metal surfaces of the carbine.

My sample had a lot of factory-installed options as well, including an octagonal aluminum handguard that replaces the standard round, vented type and allows the mounting of lights, lasers, etc. Other standard features are the upper and lower receiver, which is milled from aluminum bar stock and the aforementioned integral Picatinny rail on the receiver upper that can be fitted with open iron sights. A black “skeleton” butt-stock and black AR-style pistol grip are standard, plus the trigger components are AR-15 based, along with the safety. The magazine release is located approximately in the same place where that part is found on the AR, but the charging handle is on the left side of the receiver and the bolt knob also acts as the bolt catch when it is retracted fully to the rear and pushed in to engage a notch in the receiver. Takedown is also much the same as an AR, with two large, captive pins holding the upper and lower receiver sections together. Once separated, the bolt assembly is easily removed—I would direct your attention to the owner’s instruction material. Frequent cleaning is encouraged as blowback operated weapons are inherently dirty.

1 of 3
Thureon Defense Carbine 164_phatchfinal
Here you can see the results of the 33 round combat/reliability course. Shooting was done using the Bushnell red dot sight; other than the head shots, point of aim was center mass and there were no malfunctions.

While the Magpul “iron” sights are excellent, I decided to add some optics to my Thureon Defense Carbine. One of my favorites is a Tactical Red Dot sight from Bushnell that was at one time offered under the Trophy line of scope sights. It has 1x magnification, red or green illuminated T-dot reticle with 5 different brightness settings, high contrast Amber-Bright lens coating, and an integral Weaver-type mounting rail. This rugged optical sight is dry nitrogen filled so that it is fog-proof, along with being shockproof and waterproof. The current equivalent of this sight is the Bushnell 1x MP (Model 730132P) and it has all the features of the older Trophy model and more. Along with the same exterior matte black finish, the new sight has a built-in open sight with a rear notch on the upper rear of the scope and a front blade above the forward lens. Another back-up should the optics fail is the Magpul detachable sights. When the sights are flipped up into the operational position you can easily see them through the optical sight; whether or not the sight is illuminated. I used them to sight through the Sky Screens of my chronograph when I was taking velocity readings and they were dead-on my point of aim at 25 yards.

Ammunition selection was next and I elected to use both some older and newer 9mm Luger loads in the Thureon Defense Carbine. For a 115-grain bullet load I picked the CorBon 115-grain JHP +P round. In a 124-grain bullet I made two choices; the first was a 124-grain brass-jacketed HP in +P from McNett’s DoubleTap, next was a 124-grain FMJ load from Remington-UMC. In the Winchester Ranger line of LE cartridges I had a 127-grain SXT-HP rated +P+ and in the 147-grain bullet category was the Speer Gold Dot HP. Of course besides having an accuracy advantage, which allows for use of the pistol round at longer distances, there is also a significant velocity boost that translates to increased muzzle energy. For example the DoubleTap round has a factory velocity reading of 1,310 feet per second (fps) out of a Glock 17 pistol, with a resulting 473 foot pounds of muzzle energy (FPE). Out of the 18-inch barrel of the carbine, the velocity averaged 1,564 fps giving 673 FPE. Certainly not a giant-killer, but a bit more power nonetheless. The rest of the 9mm test ammunition was fired through my chronograph during this first day at the range and the velocity figures are included in the accompanying performance table. Unfortunately a factory “squib” load left a bullet lodged in the barrel and my shooting ended for the day.

A week later I was back out at the range and did my accuracy testing with the Thureon 9mm Carbine. From the bench, using a sandbag rest I fired three 5-shot groups with each test load at 50 yards. I had the Bushnell optical sight set on red #4 brightness level, since it was a sunny day. The carbine’s trigger pull is certainly not “match grade” and even though a bit heavy and “mushy” my performance was fairly credible. My group of the day measured 1.24 inches with the CorBon 115-grain JHP +P load. It also came in second place in the group averages at 1.85 inches. The next best 5-shot cluster was with the Speer 147-grain Gold Dot HP at 1.28” and it came in first place in group averages with 1.46 inches.

So far reliability had been top-drawer with no malfunctions attributable to the Thureon Defense Carbine. I filled up a 33-round magazine with a mix of the 9mm test ammo and did a combination combat course/reliability test. I highly recommend the UpLULA universal pistol magazine loader made by Maglula. It makes loading this and other double-column, hi-capacity magazines a breeze. Using the Bushnell sight and starting from a standing barricade position at 50 yards, I fired 5 rounds at the head of a humanoid silhouette target I had placed at 50 yards. I then double-timed about 20 yards to a tree and fired 10 rounds from the left side at the targets center mass. A little closer to my target and over to my left about 15 yards was a pile of dirt. I made my way to this position of cover and fired 3 rounds at the target in route, then fired 10 more rounds from a kneeling position. Lastly I made my assault firing as I advanced and finished up what was in the magazine. The results were not bad and I encountered no malfunctions.

In the final analysis, the Thureon Defense Carbine GA version with a number of factory options was functional, reliable and suitably accurate. The carbine should be a versatile weapon for LE, security or self-protection. It extends the range and power of the 9mm pistol cartridge and the GA version allows Glock users to not only use the same ammunition as their side-arm, but the same magazines if necessary. 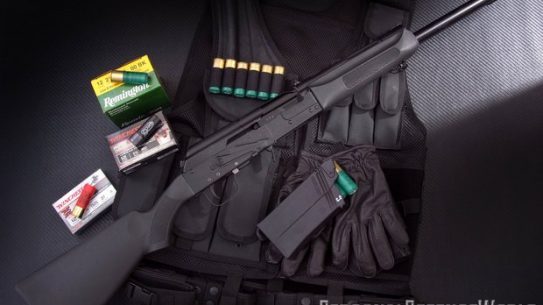