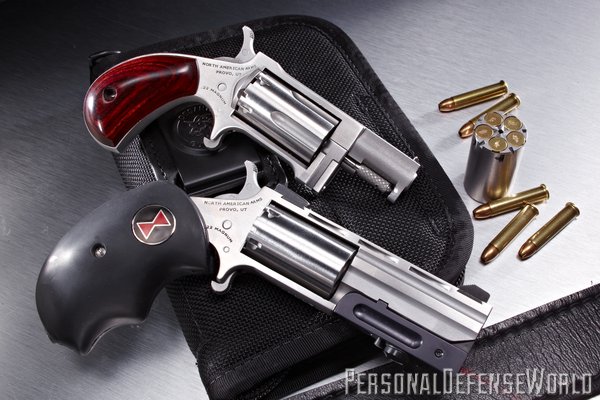 1 of 7
Pocket Pistols_NAA_Two pager 12178_phatchfinal
While the reliable Sidewinder (top) and Black Widow (bottom) may be miniscule, .22 Magnum rounds can be very effective at close range. 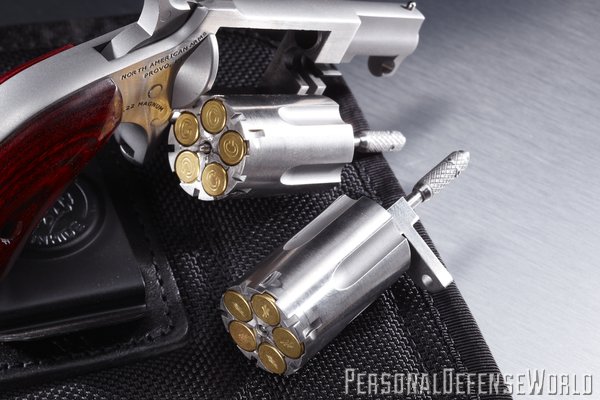 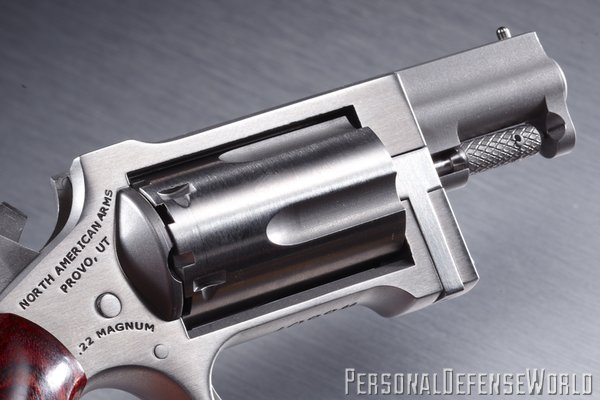 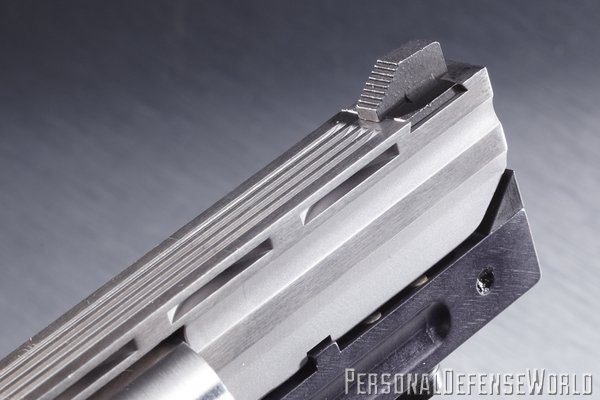 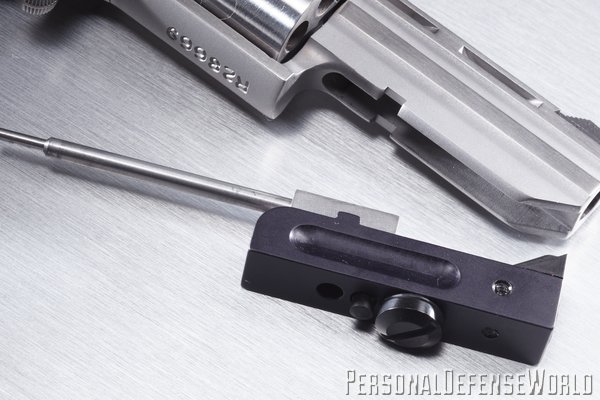 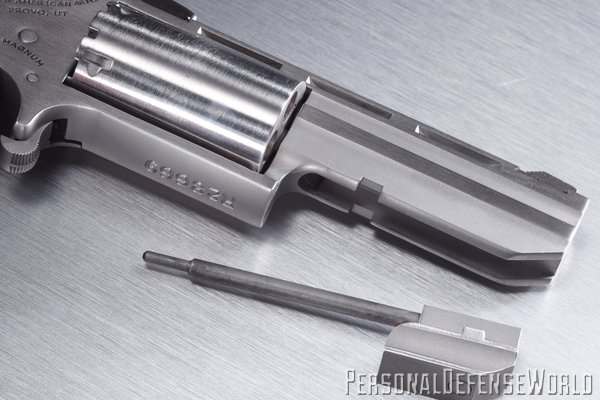 6 of 7
Pocket Pistols_NAA_Two pager 12199_phatchfinal
For loading, the Black Widow utilizes a latch system to remove the cylinder. 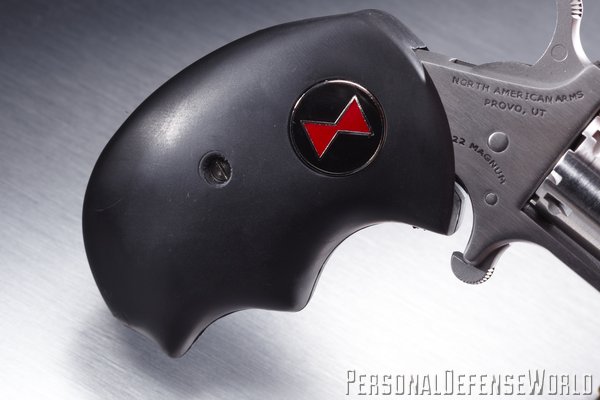 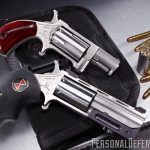 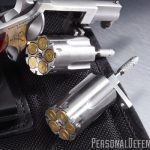 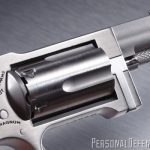 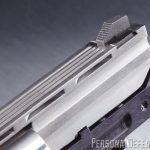 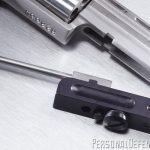 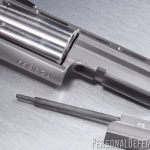 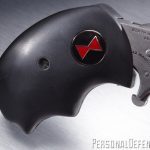 Based in Provo, Utah, North American Arms (NAA) has been around for some four decades. Beginning as a corporate subsidiary, NAA was later purchased by Sandy Chisholm in November 1991, and he remains the CEO to this day. NAA initially made its name with a single-action Mini-Revolver in .22 Short that measured only 3.5 inches long and weighed 4 ounces empty. Today, that product is still in the NAA catalog along with about 70 other Mini-Revolvers, which include variants in .22 LR and .22 Magnum, as well as the Guardian semi-automatic pistols in .32 ACP, .380 ACP, .25 NAA and .32 NAA. With a variety of finishes, barrel lengths, modes of carry, sights and optional features, there is something for almost everyone.
NAA’s diminutive handguns are certainly not in the same class as, say, a .45 ACP autoloader. Chisholm reportedly said, “We would never suggest that our .22 Mini is better than a .45. It is unarguably, however, better than nothing, which is the void our product is designed to fill.” In that spirit, let’s take a look at two of NAA’s latest Mini-Revolvers.

The new Sidewinder is, in my humble opinion, the epitome of NAA Mini-Revolver evolution. This five-shooter, with its swing-out cylinder, is the real deal and will appeal to folks previously put off by NAA Mini-Revolvers that required the cylinder to be removed for reloading—a slow process. The Sidewinder, even with the faster loading system, has only seen a marginal increase in size and weight compared with that of its brethren. A typical .22 Magnum Mini with a 1.12-inch barrel weighs 5.9 ounces, while the 1-inch-barreled Sidewinder weighs 6.7 ounces and is just 0.25 inches longer overall. It comes standard in .22 Magnum, but a .22 LR conversion cylinder is available, which is great for practicing with less expensive rounds.

With its spur trigger, bird’s-head grip and upraised hammer spur, the Sidewinder looks like a vest-pocket revolver from the Old West. Its cylinder is released similarly to the first swing-out-cylinder wheelguns: Cock the hammer into the first notch, then pull the checkered head of the extractor rod forward, which unlocks the cylinder and allows it to be swung out to the right. The ejector rod has a very short throw; it works well expelling .22 LR cases, but some .22 Magnum brass must be plucked out. Still, it beats having to remove the cylinder and punch out brass with the cylinder pin! Converting to .22 LR involves swapping out one cylinder unit for the other by removing the crane screw located at the front of the frame.

Keep in mind that this is an SA revolver with the firing pin integral to the hammer nose. So that you can safely load all five chambers, NAA has cut locking notches between the chambers, at the rear of the cylinder, where the hammer nose can rest. There are also notches that act as loaded-chamber indicators, since the cylinder chambers are counter-bored to enclose the case heads. A cut in the rear portion of the topstrap gives you a visual for proper hammer-nose placement and also serves as a rudimentary rear sight. A small post near the muzzle comprises the front sight. The Sidewinder is constructed of stainless steel and comes with laminated grips, which facilitate carrying this little five-shooter in some very imaginative places.

If the minimum in size and weight is not a factor, then the NAA Black Widow may be what you are looking for. With an empty weight of 8.8 ounces, an overall length of 5.87 inches and a 2-inch, ribbed barrel, the Black Widow offers Millet fixed or adjustable sights that are easier to see and use, a “bull,” un-fluted cylinder and hand-filling rubber grips. In fact, the Black Widow in the Mini-Master series, along with the squat 1-inch, heavy-barrel Pug, were the first NAA Mini-Revolvers to offer a faster and more fumble-proof cylinder removal system. The original Mini-Revolvers had a larger-diameter knurled head on the cylinder pin with a tiny button on the end that had to be pressed to unlock the cylinder for removal. The Black Widow and Pug did away with this system in favor of a latch located below the barrel. Pulling down on and
rotating the latch unlocks the pin and allows it to be pulled forward and out for cylinder removal. The bigger latch is easier to manipulate in a stressful situation, where fine motor skills worsen.

Other than the foregoing features, the Black Widow offers the same operational and safety features of the Sidewinder and of most other NAA Mini-Revolvers. You can also get an optional .22 LR cylinder for this model. Conversion is accomplished by the same cylinder removal process as loading and unloading. At first glance the barrel appears to have a vent rib on top, but the semicircular notches don’t go completely through; the upper surface is serrated and the sights are dovetailed into the rib. Below the barrel is what looks like an ejector rod shroud. It is actually a rail the cylinder pin rides in as it is pulled forward for removal. Flutes in the side of the barrel create a look reminiscent of the octagonal barrel once popular on cap-and-ball six-guns.

The NAA Mini-Revolvers are “carry much/last ditch defense” handguns, fulfilling their best potentials as backups or backups to the backups. Usage will be up close and personal, with precise shot placement giving the .22 Magnum its best opportunity to get the job done. Even in ultra-short barrels the .22 Magnum +V loads with lightweight bullets in the 30-grain range can generate velocities over 1,000 feet per second (fps). A few years ago, I tested a then-new NAA Pug using CCI Speer Gold Dot .22 Magnum JHP ammo and actually achieved reliable bullet expansion in test media. Hornady also has a Critical Defense load in .22 Magnum with a 45-grain FTX bullet that looks promising. For more information, visit northamericanarms.com or call 800-821-5783.

Based in Provo, Utah, North American Arms (NAA) has been around for some four…