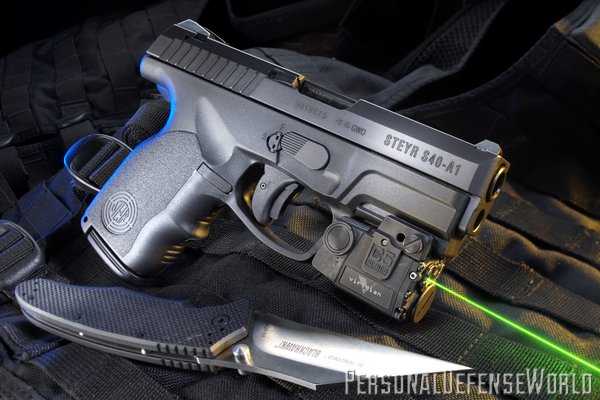 1 of 7
CH_03_11_Steyr_S40A1_69_phatchfinal
Steyr’s polymer-framed S40-A1 features a comfortable grip, a crisp DAO trigger and a design that successfully tames the .40 S&W’s recoil. 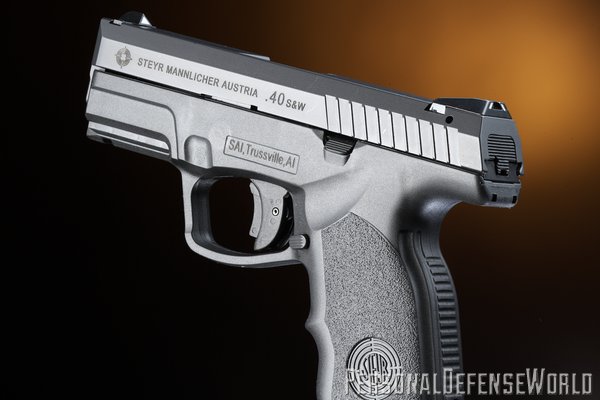 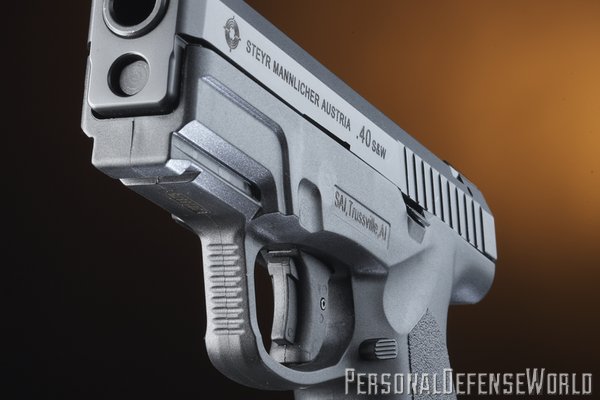 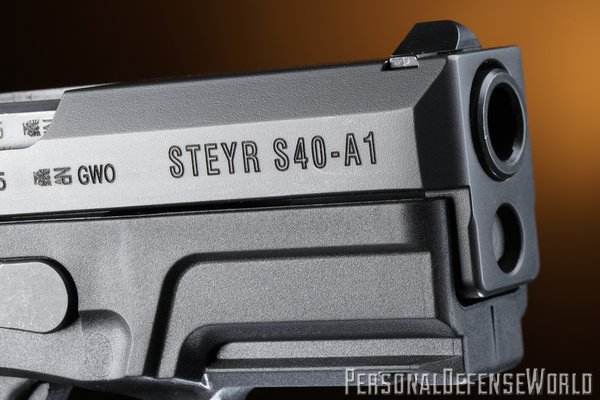 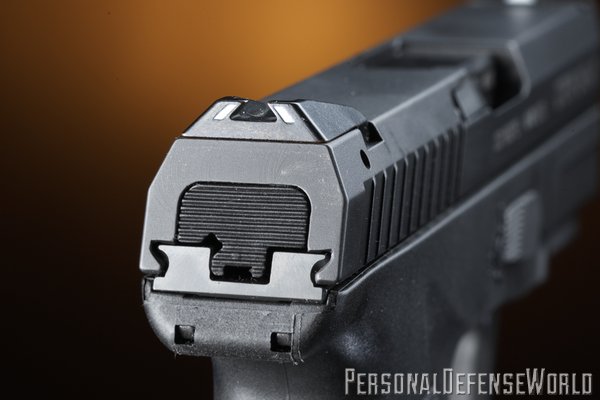 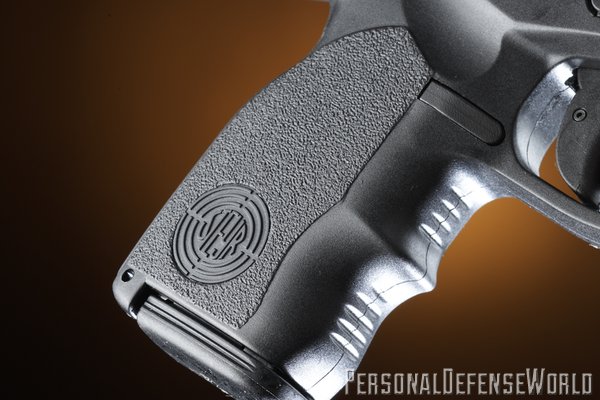 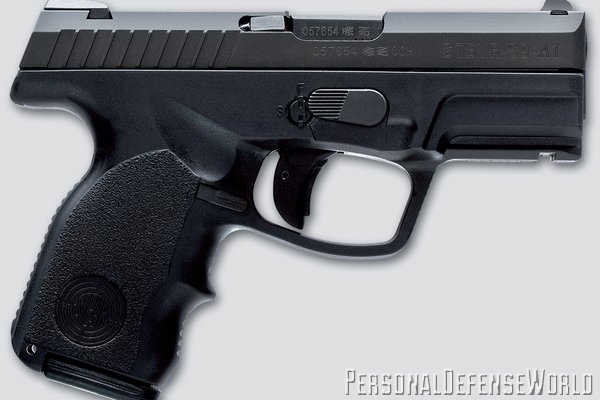 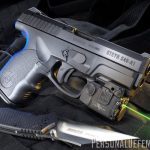 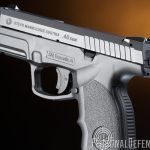 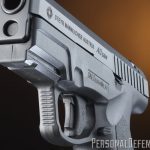 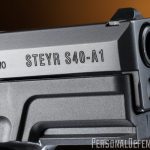 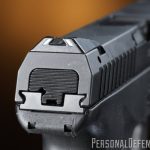 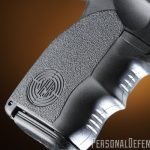 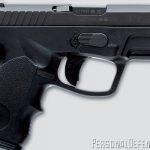 In August 2010, Steyr reintroduced its series of polymer-framed, striker-fired pistols intended for military, police and personal protection applications. This product line was on hiatus in the U.S. for a time but has now been updated, improved and given an “A1” designation, which differentiates it from the previous generation of handguns. Among the pistols now available from Steyr is the S40-A1, a compact semi-auto chambered in .40 S&W.

The S40-A1 has a size and weight profile in line with other popular defensive-carry pistols, including the Glock 23, Smith & Wesson M&P and Springfield XD compacts. However, the S40-A1’s sleek lines, generous triggerguard and ergonomic grip configuration make it stand out from the crowd. The steel slide has a tough Mannox finish and is topped with Steyr’s unusual triangle/trapezoid sight system.

The 3.62-inch, cold-hammer-forged barrel features six-groove conventional rifling, a fully supported chamber and a witness hole for use as a loaded-chamber indicator. The polymer frame has a tactical Picatinny rail for adding light or laser modules. The small but perfectly functional magazine release is located on the left side of the frame. The wide-open triggerguard leaves plenty of room for large fingers or gloves.

The double-action-only (DAO) trigger contains a Glock-style safety system Steyr calls a Reset Action Trigger. It tipped the digital trigger gauge at 5.31 pounds. The next-gen trigger has a short, smooth, crisp trigger stroke that makes it feel lighter and easier to operate than the digital gauge alone would imply. The slimmed-down, textured grip is molded at 111 degrees to the frame. The high grip backstrap, with a generous indentation for the web of the thumb, places the bore axis lower in the shooting hand. The result of these design choices is a pistol that feels natural to aim, comfortable to hold (even in smaller hands like mine) and has a noticeable reduction in felt recoil.

The new Steyr S40-A1 shipped for this review was found to be spotlessly clean inside and out. It only took a bit of lubrication to get it ready to go. The fit and finish of the steel and polymer components demonstrated a high level of craftsmanship, and the pistol didn’t have any of those mysterious internal rattles when it was shaken.

When picking up an unloaded S40-A1, the pistol feels a little top heavy. However, when a loaded magazine is inserted, the pistol balances out nicely. The weight in the slide plays an important role in managing recoil. The S40-A1’s grip shape, grip angle and slide configuration do an excellent job of mitigating felt recoil.

The Steyr triangular sights take a little getting used to if you’ve cut your teeth on three-dot pistol sight systems. Although these sights are not conducive to punching cloverleaf patterns on long-range targets, they proved to be very useful for quick target acquisitions at self-defense distances. Whether firing from a benchrest or in two-handed drills, using practice or defense-grade ammunition, the accuracy showed that this pistol is likely to out shoot the shooter.

The four metal factory magazines provided for testing each loaded into the gun with ease and dropped free just as U.S. shooters prefer. The only malfunction of the entire test was a single failure to feed during the first 25 rounds fired. Since this occurred well before the 200-round break-in period was complete while using practice-grade ammunition, the S40-A1 proved itself to be a reliable pistol.

As a shooter who’s handled and fired a variety of striker-fired, polymer-frame pistols, it’s strange to me that American shooters seem slow to adopt Steyr’s defensive pistols. The S40-A1 has plenty of positive features, especially if you are in search of a striker-fired pistol that doesn’t feel blocky or awkward to work with. For more information, visit steyrarms.com or call 205-655-8299. 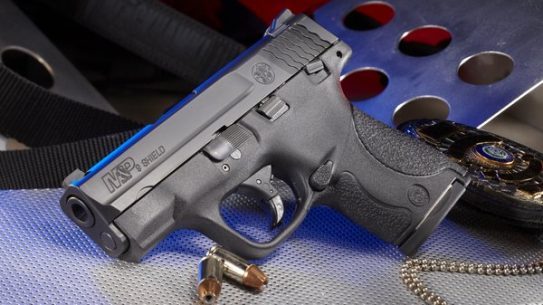 In August 2010, Steyr reintroduced its series of polymer-framed, striker-fired pistols intended for military,…