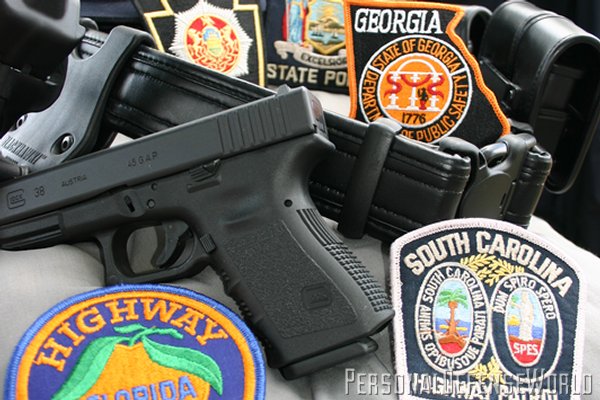 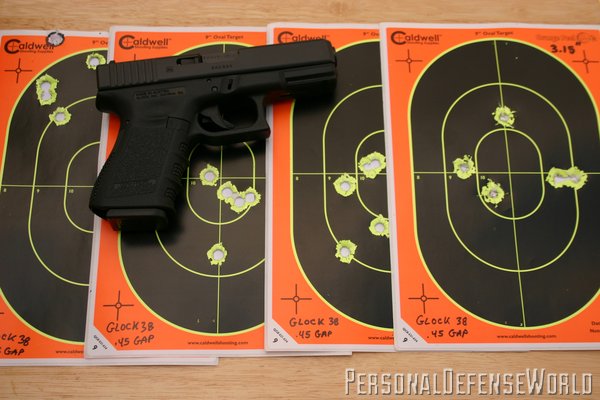 2 of 4
GLOCK .45 GAP 046_phatchfinal
Here you can see the results of the accuracy testing. These groups were fired from the bench at a distance of 25 yards and are more than adequate for law enforcement and self-defense use. 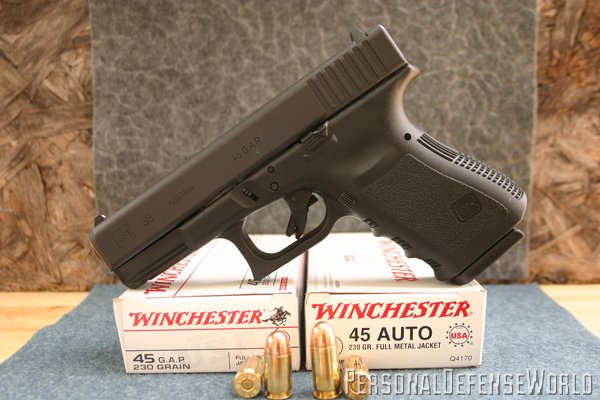 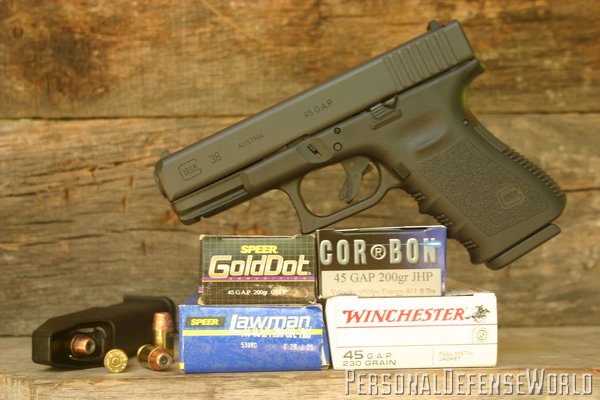 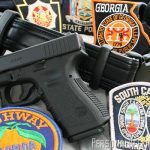 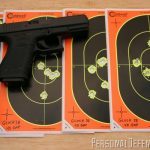 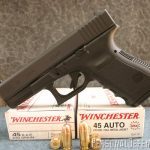 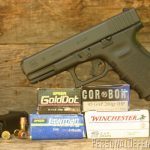 A new handgun cartridge was introduced in 2003, the first identified with pistol-producer GLOCK. It was called the .45 GLOCK AUTO Pistol (G.A.P.) and offered ballistics and performance very similar to the venerable .45 AUTO cartridge. What made the .45 G.A.P. different was the cartridge case length, which was shortened to 0.755 inches—as opposed to 0.898 inches for the .45 AUTO—allowing the cartridge to be used in pistols with smaller frames that would normally be chambered for cartridges like the 9×19 or .40 caliber.

GLOCK at first manufactured a full-sized pistol for the new cartridge and gave it the numerical designation of GLOCK 37. It had the 4.48-inch barrel of most standard, service-type models and a 10-round magazine capacity. It was followed by the more compact GLOCK 38, which had a 4.01-inch barrel and eight-round capacity, and then the subcompact GLOCK 39, with a 3.42-inch barrel and six-round capacity. These pistols compare favorably in size and weight to 9×19 and .40 GLOCK pistols.

Although a new G37 in the Gen4 configuration is now available, let’s look at the more-compact G38. Besides the 4.01-inch barrel length that brings the pistol to an overall length of 7.36 inches, the G38 has a height of 5 inches and a width of 1.18 inches—this all translates to an empty weight of just 24.16 ounces. It is compact enough for concealment but does not look or feel out of place on the gun belt for duty use.

Like all GLOCK pistols, it’s a black gun. From the non-reflective, corrosion-resistant, matte finish on the slide to the reinforced-polymer frame and nearly everything else on the exterior—it’s all black.

The corners on the slide of the GLOCK 38 are rounded to eliminate snagging. The front sight has a white dot, and the rear sight notch is white-outlined (tritium night sights are optional). The extractor also acts as a loaded-chamber indicator. The polymer frame is not only durable and lightweight—it also helps to absorb recoil. An integral grip frame has knurled panels on the sides, plus there are serrations and checkering on the backstrap. There are memory grooves on the frontstrap. All together, the frame is very comfortable in the hand.

The slide release is low profile, and the magazine catch is reversible for southpaws. The dust cover ahead of the hooked triggerguard has an accessory rail for mounting tactical lights or lasers. My test gun featured the “New York 2” SAFE ACTION® trigger with a pull weight of around 11 pounds.

Simplicity is the name of the game, and like the typical GLOCK pistol, the G38 has only 34 component parts. This increases reliability and durability while lowering maintenance costs—all factors that contribute to GLOCK’s success in the LE handgun market, with some 65 percent of American LEOs carrying GLOCK pistols. The KISS (Keep It Simple, Stupid) Principle not only extends to the construction of the pistol itself but also to its operation and disassembly. Another item worth mentioning is the barrel on GLOCK pistol, which has octogonal rifling that decreases bullet deformation and increases accuracy and velocity due to the improved bullet seal in the barrel. This G38 barrel has 1-in-15.75-inch right-hand twist rifling, and the pistol’s low bore axis helps tame muzzle flip and recoil.

2 of 4
GLOCK .45 GAP 046_phatchfinal
Here you can see the results of the accuracy testing. These groups were fired from the bench at a distance of 25 yards and are more than adequate for law enforcement and self-defense use.

About 10 percent of state police and highway patrol agencies in the U.S. are now using GLOCK pistols chambered for the .45 G.A.P. They include the Florida Highway Patrol, Georgia State Patrol, South Carolina Highway Patrol, Pennsylvania State Police and New York State Police. Added to that are local police agencies like the Berkeley, Missouri, and Horton, Kansas, Police Departments. In my conversations with LE users of GLOCK pistols in .45 G.A.P., the overriding factor in their selection has been the power-to-size ratio. Essentially, the user gets .45 AUTO power and performance without having to carry a larger and heavier pistol. The weapon handles well for smaller-statured officers, and the .45 G.A.P. offers generally less recoil when fired through GLOCK pistols. This translates to improved accuracy, rapid recovery after a shot, and faster target acquisitions.

To test the GLOCK 38, various brands of .45 G.A.P. ammunition were secured.

The chronograph was set up to see what kind of velocities would be received from the G38’s mid-length barrel. The end flap on the box of CorBon .45 G.A.P. ammo had a factory velocity listing of 950 feet per second (fps). It was not clear what barrel length was used to obtain this figure, but an average velocity of 927 fps was received with this load out of the G38. This then gives you a muzzle energy projection that approaches 400 foot-pounds.

Benchrest shooting with the G38 for accuracy came next at a distance of 25 yards. A large silhouette target was set up for some informal shooting to check the sights. Three 5-round groups were fired for each test cartridge. The best group of the day was a five-shot cluster produced by the Speer 200-grain Gold Dot load measuring 2.32 inches. The point of aim to hit the target center with most loads was about 3 inches below the center of the black, oval-shaped bullseye. Second place went to the CorBon 200-grain JHP with a 2.52-inch group.

Now it was time for some combat shooting exercises. I decided on a course using 25 rounds and placed a traditional humanoid-type, K-zone silhouette target 25 yards away. I engaged the target from the holster at 5 yards, firing strong-hand-only for four rounds. Then I shifted to the support hand, fired another four rounds and changed magazines. Moving back to 10 yards, I drew and fired two rounds.

Keeping the G38 in a high-ready position, I fired two more sets of double-taps. Holstering, I drew and fired two shots to the upper chest cavity and one to the lower abdomen for a body armor drill. I repeated this a second time after a magazine change. Lastly, I moved to the 25-yard barricade and fired two shots standing from the left side of the barricade, two shots from the right side, and one shot kneeling. Both times I ran this drill, all hits were in the K5 zone for a maximum possible score. The bottom line: The GLOCK 38 worked flawlessly with no malfunctions or problems during the test. From fast-shooting 200-grain JHPs to slower-moving 230-grain ball ammo, the gun shot well, was easy to control, and the recoil and muzzle flip were on par with other similar-sized pistols I’ve used in 9×19 and .40 caliber. It’s easy to choose a GLOCK pistol in .45 G.A.P. You get a moderate-sized gun that still has a big .45 hole in the muzzle, and you don’t miss out on any of the performance of the .45 AUTO. In a world of pluses and minuses, there are no minuses in this equation. 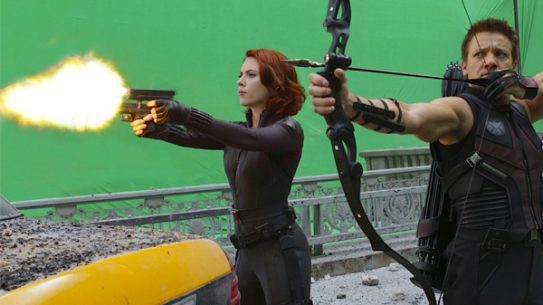 A new handgun cartridge was introduced in 2003, the first identified with pistol-producer GLOCK.…