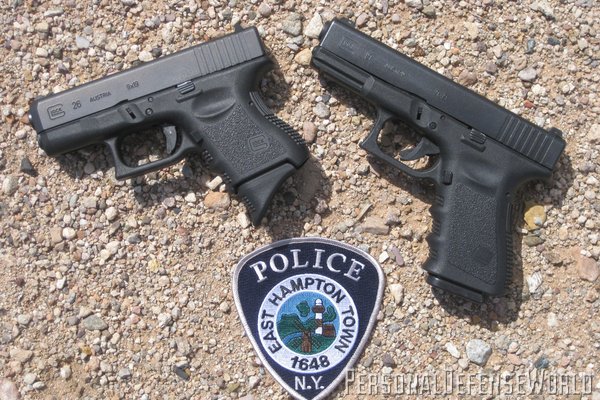 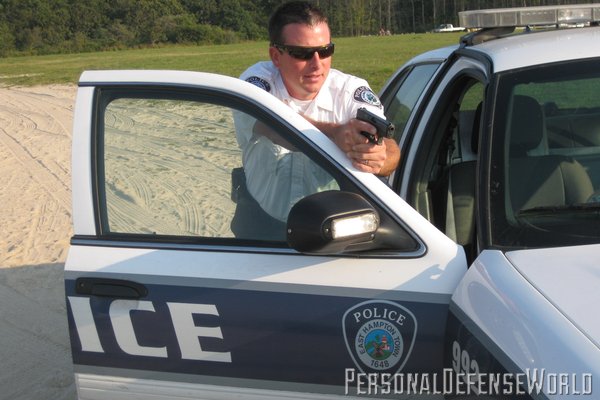 2 of 5
group 26 116_phatchfinal
Lt. Chris Hatch of the EHTPD takes cover behind the car door of his marked police car while armed with his issued Glock 26 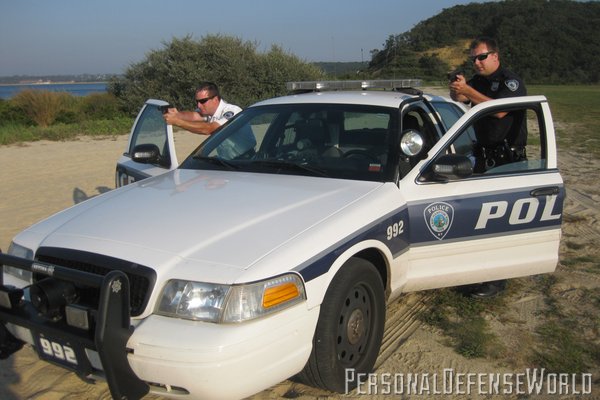 3 of 5
group 26 113_phatchfinal
Officer John Anderson, Jr. of the EHTPD demonstates the proper technique for covering a suspect while his partner provides backup with his Glock 26 from the passenger side of an EHTPD patrol car. 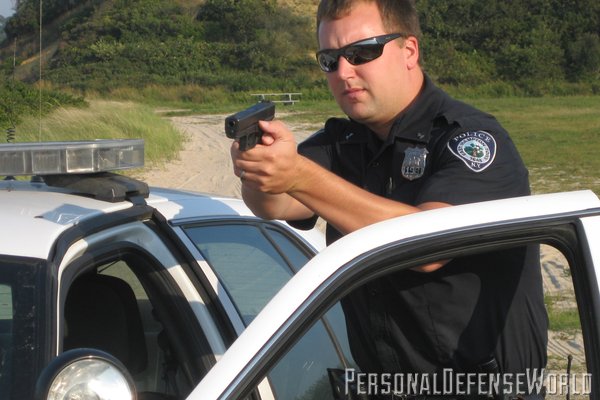 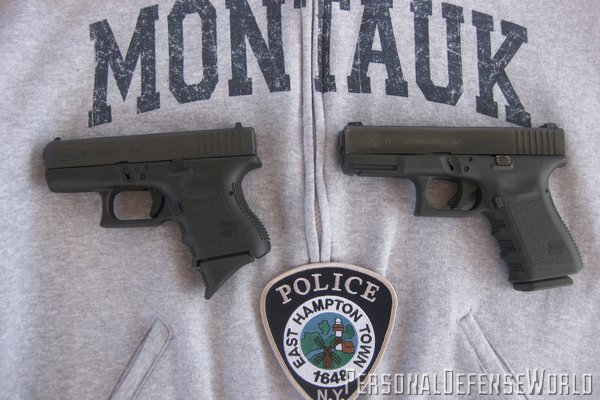 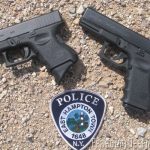 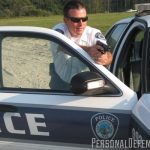 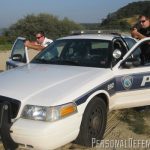 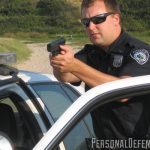 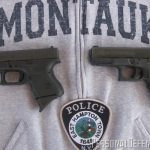 Montauk Point, N.Y., is a famous beachfront resort community that is also home to a commercial and sport fishing industry. This vacation town has become known as “The End” simply because once you pass Montauk Point, the next stop is France.

The East Hampton Town Police Department (EHTPD) protects this part of Long Island, N.Y. and is headed by Chief Edward V. Ecker, Jr., a man who has served with the agency for over 30 years. There is another long-standing relationship within the ETHPD—these cops have been issued GLOCKs for many years.

After meeting with Chief Ecker, arrangements were made for me to go out on patrol with Lt. Chris Hatch. This particular 18-year veteran of the EHTPD also serves as a firearms instructor and commander of the Emergency Service Unit (ESU), their version of a SWAT team. He taught me more about the department and their trusted handguns.
When the decision was made to transition to a new service handgun in 1992, the EHTPD decided to adopt the 9×19 GLOCK 17 for patrol personnel. Detectives were issued the 9×19 GLOCK 19. According to Lt. Hatch, the G17 was a very popular service pistol that was eventually replaced by the G19 and the G26 in 2003, with the G19 being issued primarily to patrol personnel and the subcompact GLOCK 26 being issued to supervisors and detectives.

As far as ammunition is concerned, East Hampton Town Police are issued two 9×19 brands. They include Winchester’s 124-grain Ranger HP +P and Federal’s 124-grain HP +P for service carry. Sworn personnel of the EHTPD are required to qualify twice a year, while members of the EHTPD Emergency Service Unit qualify every other month.
In order to properly maintain their proficiency with firearms, East Hampton Town Police maintain four certified firearms instructors and two GLOCK-trained armorers. All department-issued GLOCK pistols are regularly inspected for repairs and parts are changed as required. Their GLOCK pistols also undergo a complete disassembly and inspection by a trained armorer twice a year. As far as basic training is concerned, all new recruits who join the EHTPD are required to complete a state-certified police academy that is currently six months in duration.

The EHTPD is a full-service law enforcement agency that provides police protection to a pair of incorporated villages (East Hampton Village and Sag Harbor Village) and four hamlets (Montauk, Wainscott, Springs and Amagansett) that are located on the extreme eastern tip of Long Island. According to Chief Ecker, 65 sworn police officers and 14 non-sworn or civilian support personnel staff the EHTPD.

The problem with policing the extreme eastern end of Long Island is that the seasonal population of some 22,000 dramatically increases in the summer months, when part-time residents and tourists literally flood the area to enjoy the beautiful beaches and other attractions that this resort area is famous for. It should also be noted that the population of year-round residents, as well as residents and tourists who visit the Town of East Hampton during three out of the four seasons, has also increased over the years.

Due to the fact that the population surges from 22,000 to approximately 85,000 to 90,000 seasonal residents and visitors, the EHTPD often have to do more with less during the busier times of the year. To give you an idea of the level of activity in this jurisdiction, it pays to examine the statistics that Lt. Chris Hatch provided.

2 of 5
group 26 116_phatchfinal
Lt. Chris Hatch of the EHTPD takes cover behind the car door of his marked police car while armed with his issued Glock 26

3 of 5
group 26 113_phatchfinal
Officer John Anderson, Jr. of the EHTPD demonstates the proper technique for covering a suspect while his partner provides backup with his Glock 26 from the passenger side of an EHTPD patrol car.

The GLOCK 19 is one of those versatile pistols that is large enough to be carried by uniformed sworn personnel as well as by investigators, supervisors and off-duty personnel. The fact that the GLOCK 19 can be carried with a 15-round magazine makes this compact Safe Action® pistol a very capable firearm to carry in harm’s way.
You cannot help but feel extremely confident about the ability of the GLOCK 19 to serve in a frontline capacity when you consider that the GLOCK 19 is the most popular service pistol among members of the NYPD and was also selected to arm the Iraqi Ministry of Interior Police after the U.S.-led invasion was successful in overthrowing Saddam Hussein’s oppressive regime. Clearly, if the GLOCK 19 can serve with distinction as a service pistol for Iraqi police officers working in a combat zone, this pistol is good enough to be carried by American law enforcement officers who patrol urban, suburban, rural and resort areas throughout the United States.

The GLOCK 26 is another amazing pistol that has a sterling reputation for being flawlessly reliable, accurate and very easy to carry concealed. When you consider that for a very long time on- and off-duty law enforcement officers routinely carried a five- or six-shot .38 Special revolver with a limited supply of spare ammunition, one must admit that there is a definite benefit to carrying a more powerful subcompact GLOCK 26. After all, the GLOCK 26 holds 10 rounds of more potent 9×19 ammunition in a standard magazine and one round in the chamber. As a result, any law enforcement officer who carries at least one spare 10-round magazine can carry a total of 21 rounds of ammunition for their GLOCK 26. The fact that you can also operate a GLOCK 26 with higher-capacity magazines from a GLOCK 19 or a GLOCK 17 further enhances the capabilities of this subcompact pistol.

When you work as a law enforcement officer in places like the east end of Long Island, you need to carry a service pistol that can function reliably in extreme temperatures, in different types of weather conditions and in a sandy and saltwater environment. While no one wants sand to get into their service pistol, it is comforting to know that all models and calibers of GLOCK pistols have a well-deserved reputation for functioning reliably in the most adverse conditions, including when these amazing handguns are exposed to dirt, mud, snow, ice, freezing temperatures, torrential rain and gritty particles of sand. The fact that GLOCK pistols are designed to reliably function with minimal amounts of lubricating oil is another positive feature that must be taken into consideration when any individual or agency is looking to transition to a pistol that is built to function reliably with different levels of care.

From Beach to City

Even though members of the EHTPD operate approximately 100 miles from New York City, immediately after the terrorist attacks on 9/11, members of this department and other agencies responded to New York City to assist the NYPD and the New York Port Authority Police. In addition to patrolling the streets of New York City, the East Hampton Police also protected the city morgue and grabbed what little sleep they could on cots that were set up along the East River. I mention this as a reminder that when bad things happen, members of the law enforcement profession band together as if they are all members of the same department, with over 60 percent of the members of this profession going into harm’s way while armed with a GLOCK service pistol. 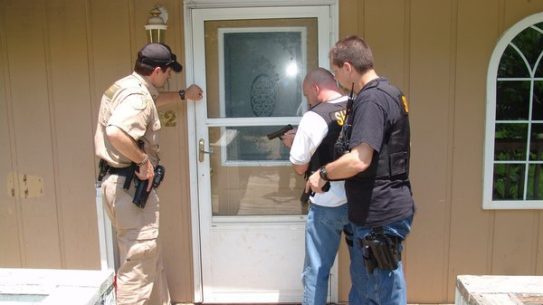 Montauk Point, N.Y., is a famous beachfront resort community that is also home to…