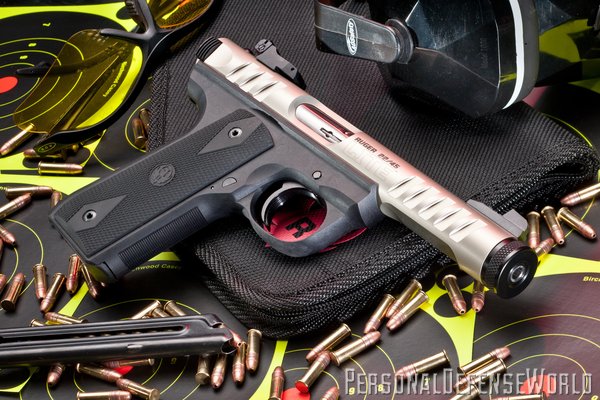 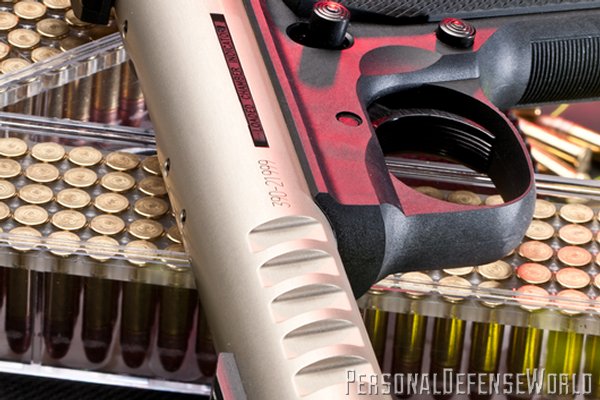 2 of 5
ruger_2245-8598_phatchfinal
The Space Age-looking one-piece receiver is extremely light in weight, thanks to the “cocking serrations” that serve only for weight reduction. 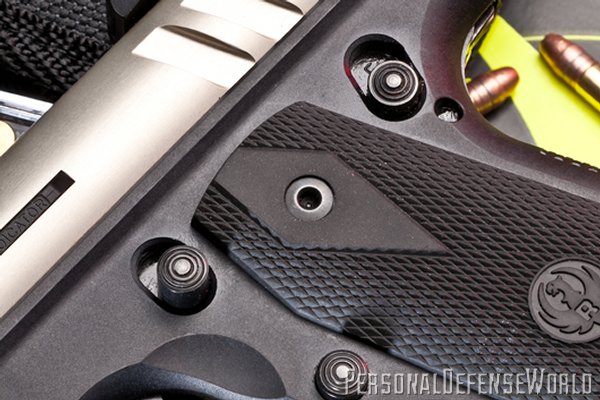 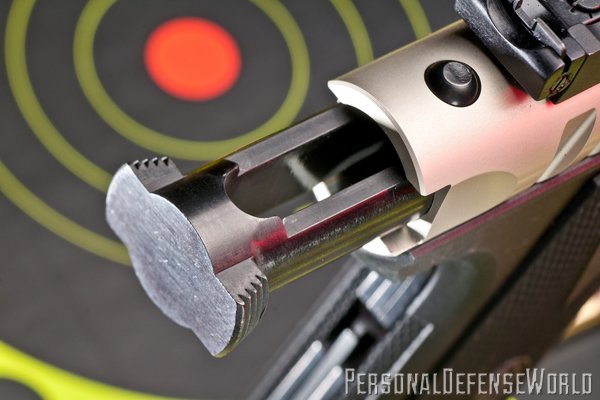 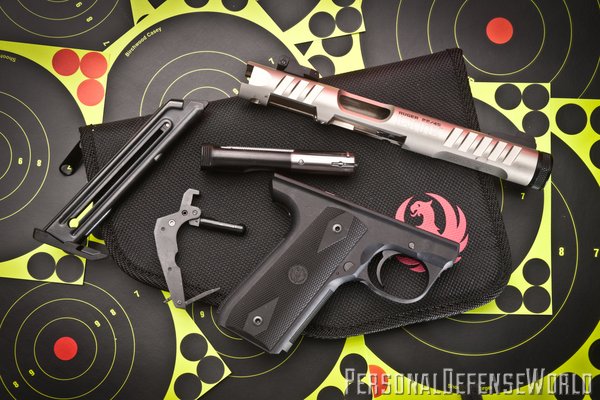 5 of 5
ruger_2245-8649_phatchfinal
Although reassembly of these Ruger pistols can be tricky (don’t lose the manual), they break down into large sub-assemblies for easy cleaning. 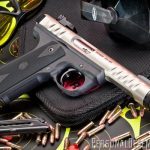 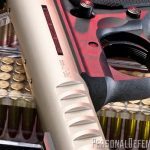 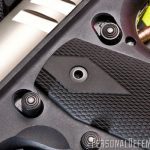 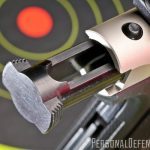 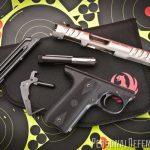 The omnipresent uncertainty in the firearms market hasn’t even begun to slow Ruger down. In the past year the company’s “damn-the- torpedoes” marketing plan has introduced new designs in several areas, not the least of which is chambered for the humble .22 rimfire. The caliber that curiously gets no respect among serious gunnies while remaining the most popular recre- ational cartridge in America has generated several new Ruger products for those unafraid of being seen in public with a non-tactical shooting device.

Introduced in April 2012, Ruger’s new 22/45 Lite follows the two 22/45, threaded-barrel guns the company brought out in January 2011. The 22/45 Lite has their same general outline but its own distinct personality.

This 22/45 Lite retains the lower half of its cousins: a black Zytel polymer frame; MKIII 22/45 removable grip panels (in this case, they’re black, diamond-checkered rubber); a serrated frontstrap and checkered backstrap; a 1911-style bolt re- lease positioned for the right-hand thumb; a safety button; a magazine release; an internal key lock on the left side; and a 10-round steel magazine. The 22/45 Lite’s upper half is all new.

Beginning with a gold anodized aluminum upper (now only available in black), as opposed to the blued steel of the more conventional 22/45s, the Lite’s extended one-piece receiver also acts as a full-length shroud for the reduced-diameter barrel. This substantially lowers weight. The alloy receiver is a single continuous- outside-diameter tube, as opposed to its cousins’ stepped two-piece receiver, which is made of a rear receiver and a smaller- diameter, solid-steel bull barrel. At the rear, the scallops, which enable a positive thumb and finger grasp on the bolt ears are more prominent. The Lite also has pseudo-cocking serrations at both ends, the loaded chamber indicator on the left side, better sights with a fully adjustable rear, and the “Ruger Warning,” which has been abbreviated and moved to a 2-inch flat recess in the bottom of the front receiver section. The lower frame still uses the familiar takedown process.

There are two things about the 22/45 Lite that quickly stand out: That spacey upper hits the eye first, and the featherweight heft registers in the hand immediately. The receiver seems to be getting a mixed reception among those wondering about the “cocking” serrations that do nothing. Ruger says the purpose of the aluminum was weight reduction (obvious), and the serrations were to “give the gun a different look and style” (they certainly do).

Weight-wise, the Lite’s 23 ounces beats out its fixed-sight steel cousin’s 32 ounces when it comes to backpacking, longer sessions or younger shooters with less upper-body strength. The barrel insert is still machined of 400-series stainless steel with broached rifling, loses no strength in handling .22 LR pressures and gives up nothing in accuracy. Inside, where you can’t see it, the barrel is fully supported at both ends. On one end, it’s supported by a 90-degree outside angle, just at the forward end of the chamber area that fits into and against a corresponding inside- angled shoulder in the receiver at the rear. On the other end, the barrel is supported by a threaded internal jam nut at the front, which tensions itself against another 90-degree shoulder inside and flush with the end of the receiver tube. Resist the temptation to fiddle with the four-holed jam nut. It’s torqued at the factory for correct barrel tension and epoxied in place. Aside from occasionally monitoring it for tightness, you shouldn’t mess with it—the pistol is not intended to be disassembled to the point of separating the barrel from the receiver. The muzzle itself sticks out 0.37 inches beyond the receiver and jam nut, with standard 1/2×28 threads for use with a suppressor. The Lite’s external screw-on thread- protector cap is also aluminum, to shave off additional weight. The pistol’s sights are steel up front, with a steel blade riding in an alloy cradle in a steel base at the rear. The serrated trigger is also aluminum.

2 of 5
ruger_2245-8598_phatchfinal
The Space Age-looking one-piece receiver is extremely light in weight, thanks to the “cocking serrations” that serve only for weight reduction.

5 of 5
ruger_2245-8649_phatchfinal
Although reassembly of these Ruger pistols can be tricky (don’t lose the manual), they break down into large sub-assemblies for easy cleaning.

Without lubing any part prior to testing, I chronographed the Lite as it came out of the box, with five different loads at 15 feet. I then mounted a Silencerco Sparrow suppressor for comparison and followed that with firing off a rest at 25 yards with the same loads the same way. The pistol’s fine the way it comes, if you can’t or don’t want to suppress it. But you’re losing half the fun without trying a can.

There was only one malfunction during the entire session, and it was with the very first round fired. Afterward, the Lite chugged along perfectly for the rest of the afternoon. The new Ruger has an almost negative balance in the hand, unlike the steel threaded versions that are noticeably more top and muzzle heavy. The Lite’s accuracy was roughly comparable with my steel 22/45. The trigger was very clean at a repeatable 4.25 pounds, though, for some of us, the sights could use a white outline and a dot or red insert up front. Otherwise, the sight picture was adequate in both the bright sunlight at the start of the session and the slightly overcast sky at the end.

Ammunition was chosen to cover standard, high and hyper velocities for both functional reliability and accuracy potential. With the exception of the one malfunction, the Ruger cycled everything equally well, even the two relatively blunt- nosed Winchester rounds—if anything has the potential for erratic feeding, it would be those Winchesters.

Chronographing .22 rimfire loads can be misleading. Frequently, there is as much variance in velocities among loads from the same box, as there is in velocities among totally different brands. Also confusing is that velocities published by ammunition manufacturers are typ- ically obtained from rifle barrels. The same rounds in shorter handgun barrel lengths will obviously show lower overall velocities and greater variations. All this matters when interpreting test results. Velocities are only part of the picture, and a given load with higher extreme spreads and a higher standard deviation number can still be quite accurate. If you reject (or select) a load based solely on its standard deviation, you may be short- changing yourself.

If you’re just plinking or punching paper (as most of do with the .22 rimfires), accuracy is a more important consideration than velocity. Still, chronograph figures are included for your information and to illustrate the different velocities achieved when a suppressor is attached. Two of the most commonly asked questions by potential suppressor buyers are “What does the can do to accuracy?” and “What does the can do to velocities?” The performance chart will help answer both questions in figures. In words, the answer to both questions is this: It’ll make some difference here and there, but altitude, temperature and wind will likely affect performance more.

All the loads were subsonic in this pistol’s 4.4-inch barrel. And while there is a minor difference in sound levels between standard, high, and hyper velocity rounds, there’s no need to chase down specialty subsonic-marked ammunition when firing with the suppressor. Anything you normally shoot should be fine as far as your ears go, and some subsonics won’t have enough horsepower to run the Ruger’s action.

By day’s end, the Ruger 22/45 Lite had fired just over 250 rounds and opinions had been formed. My first opinion was that this featherweight would make a super trail gun for hip or pack carry. Fully loaded with 11 rounds of .22 LR in box-stock form, it’s a 24-ounce forget-it’s-there proposition that moves up to 30 ounces with the Sparrow mounted. My second opinion was that the gun is accurate enough to be competitive with others in its class. I’m still unable to explain the best group of the day with five shots of Federal’s 36-grain bulk Champion HPs into a half-inch on paper (with suppressor attached), but apparently the pistol has more built-in accuracy than I do when everything comes together just right. The sights, by the way, easily clear the Sparrow with room to spare, and the two play very well together. My third opinion was that the Lite is reliable through a range of velocities and bullet- nose profiles, and the fourth was that the adjustable sights are a handier way to go than the fixed ones on my year-old 22/45.

The single ejection failure and the rear sight wandering progressively left during the shoot were the only problems I encountered. While annoying, I’d con- sider the sight an aberration, which would be fixable under warranty if you run into it too. With a suggested retail of $469 and gun-shop prices going lower, the 22/45 Lite offers good value and per-formance for normal plinking and will be a good entry-level candidate for fun suppressed fire without earplugs. For more information visit ruger.com. 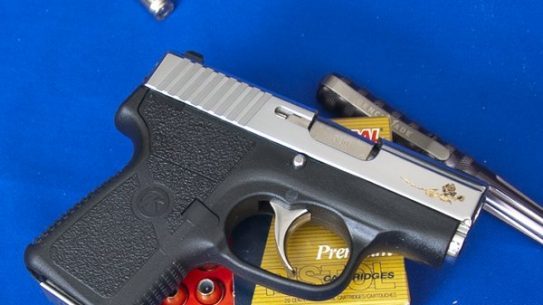 The omnipresent uncertainty in the firearms market hasn’t even begun to slow Ruger down.…