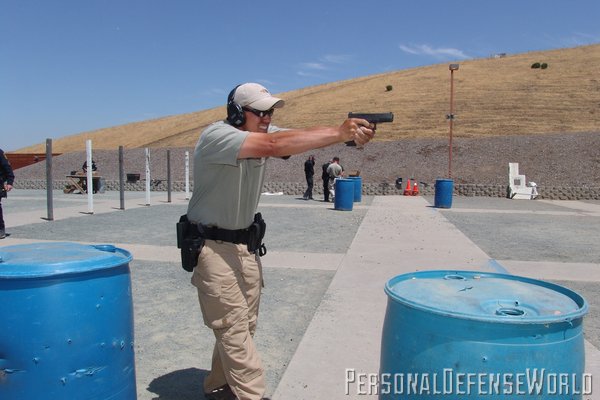 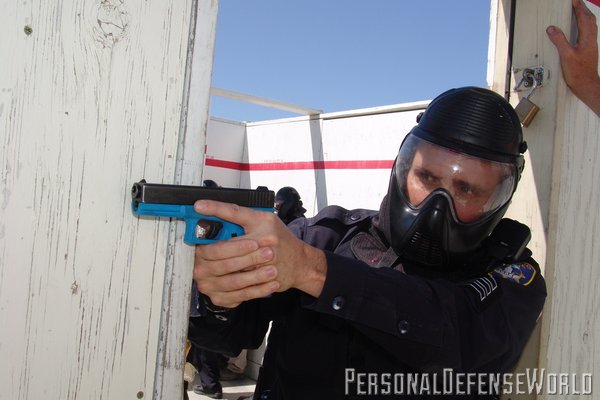 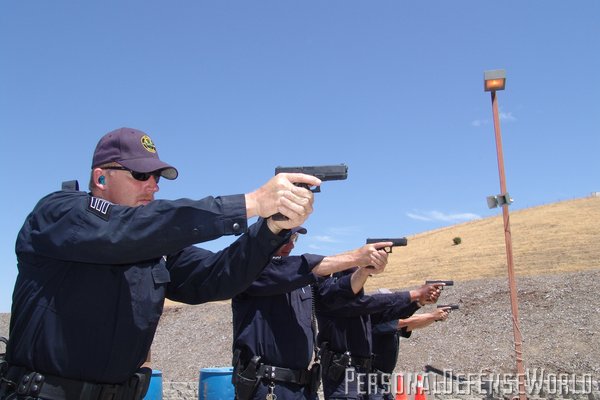 3 of 4
2. Range work with GLOCKS involve moving and shooting drills (1)_phatchfinal
Oakland PD officers work out with their Glock 22 Gen4 .40 pistols. Each exercise has the officers changing firing positions and moving based on the range officer’s commands. 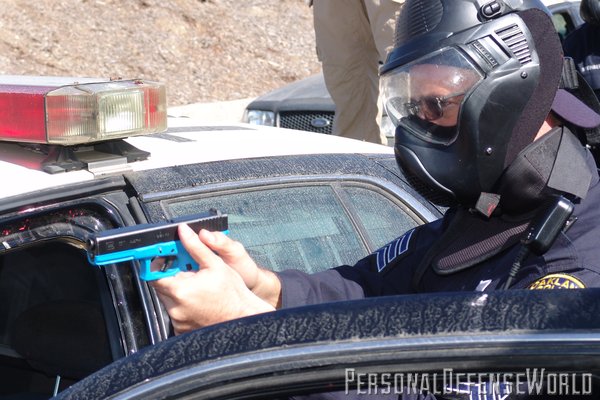 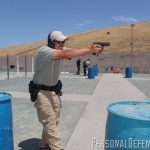 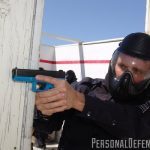 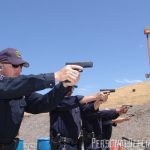 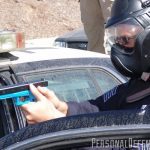 If you draw a straight line east from the center of the Golden Gate Bridge across the cold, current-swept San Francisco Bay just south of Alcatraz, you’ll hit Oakland, Calif. Named for the Redwood timber and hillside oaks logged to build San Francisco, Oakland is steeped in history, as this was the West Coast terminus of the intercontinental railroad, and it’s also the busiest commercial port on San Francisco Bay.

To uphold the law, the Oakland Police Department has the best equipment and training. I was along for the ride when an officer from the OPD attempted to stop a white SUV whose ownership was in question. The driver tried to flee and hit another car. The impact left the SUV disabled and smoking off the shoulder of a side street. The SUV’s driver then got out and bolted into a suburban residential area, leaving three people, including two children, sitting dazed but uninjured in the vehicle.

Arriving units quickly blocked off the intersecting roads and set up a perimeter around the area where the subject was last seen, a two-block residential area. Realizing that a thorough search was needed, the patrol officers organized themselves into Designated Arrest Teams (DATs) to clear the area, house by house, yard by yard. Each team member had a designated task, including who would use less-lethal force and who would use lethal force if necessary. Each officer had their OPD-issued GLOCK, some with their new .40-caliber GLOCK 22 Gen4 pistols and others with their .45 AUTO GLOCK 21s or 9×19 GLOCK 17s. The team included a K-9 with her handler, both trained and experienced in tracking subjects hidden in urban, suburban and wooded terrain. Briefed and armed, the DAT set out to find the hiding perp.

Alerted by radio, a pair of sworn officers and qualified pilots, Joe Villalobos and Jon Vanerwegen, quickly prepped and took off in the McDonnell Douglas “Little Bird” helicopter to provide aerial observation and surveillance, assisting the search effort and ensuring the safety of the officers on the ground. It was evident that there was a tremendous amount of cooperation and effective communication between the ground and air assets.

From the air, it was easy to see where the officers and K-9 were heading. The chopper pilots were able to talk to the team to let them know of any danger or signs of the suspect. The first yard was cleared by the team, then the second. As they approached the third house, with the helicopter overhead, the K-9 alerted the DAT to a space between two fences in the backyard. Approaching with weapons drawn, the subject, knowing he had no place to run, surrendered without incident due to the coordinated and swift response of the OPD helicopter and the DAT—all armed with the world’s best pistol, the GLOCK.

The over 600 sworn officers of the Oakland PD deal with a diverse population of about 400,000 residents living in 56 square miles of “the Flatlands” and “the Hills.” They face similar issues of other large cities—hard drugs, gangs and crime associated with both. The residents, commuters and tourists are protected by a variety of specialty OPD units including K-9, animal services, patrol, intelligence and maritime support for the busy waterfront and over 22 square miles of inland waterways. Sworn officers, no matter their duty station, have two things in common—the excellent training that each receives at the nearby Concord range and their GLOCK sidearms.
The experienced OPD instructors at the Concord facility include Chris Saunders, who is not only an excellent range instructor but is also a certified GLOCK Armorer.

3 of 4
2. Range work with GLOCKS involve moving and shooting drills (1)_phatchfinal
Oakland PD officers work out with their Glock 22 Gen4 .40 pistols. Each exercise has the officers changing firing positions and moving based on the range officer’s commands.

Chris has been a police officer in Oakland for 13 years, and he’s been on their SWAT team for about half that time. The OPD has 30 qualified SWAT members, trained by their own SWAT school in entry tactics, with some operators specifically trained in long-range precision shooting as well as kinetic and explosive breaching. The OPD SWAT team is comprised of patrol officers from all over Oakland, or in Chris’ case from OPD Headquarters, who respond, sometimes several times a week, to calls all over the East Bay. When not deployed on a SWAT callout, Chris spends time working with the hundreds of OPD GLOCKs, training new officers and spending time on the range with the periodic in-service classes that all sworn officers attend at least twice a year.

At the Concord training facility, instructors Chris Saunders and Billy Burke used one of the most effective simulations possible to teach officers how to use their GLOCKs. The day I was present started with dynamic scenarios based on actual events with active role-players armed with training GLOCK 17Ts loaded with Simunition marking rounds. All personnel have additional protection from Simunition hits for critical areas such as their face, neck and groin. The purpose of the training is to replicate a situation such as a traffic stop with non-compliant persons, forcing each officer to decide how much force to apply for each situation. They practice each technique prior to escalation and then thoroughly discuss their performance in the post-event critique so they can learn by doing, when there are no lives at risk. The blue-framed GLOCK 17Ts used for the Simunition exercises operate exactly like their duty GLOCKs, so officers can concentrate on their interactions and communicating with other officers present.

The OPD conducted an informal poll of their officers to find out what pistol they wanted to carry. The overwhelming preference was for GLOCK pistols, so OPD chose well with the new GLOCK 22 Gen4 .40 for uniformed members, including the SWAT team. Until fully transitioned, other OPD officers will continue to use their other preferred G17 and G21 pistols. Why GLOCK? Officer Saunders enjoys training with a GLOCK because “its ruggedness and simplicity makes it a perfect pistol for law enforcement.”
That opinion is shared by Officer Jon Vanerwegen (also the helicopter pilot), who believes, “GLOCKs are simple and work when you need them.” He went on to mention that GLOCKs are “reliable and they don’t take any thought [to prepare to shoot] and they’re easy to clean.”

Officer Steve Toribio liked his new GLOCK 22 Gen4 so much he has purchased his own for off-duty carry. Officer Toribio mentioned that he likes the Gen4 GLOCKs because “the replaceable backstrap gives me a perfect fit.”

Other officers mentioned that they preferred Gen4 GLOCKS because the improved dual recoil spring assembly provides for faster shot recovery, and they like that they can reverse the magazine catch to accommodate left-handed shooters. Overall, the officers appreciate the operator-friendly features plus the three independent safety systems that secure the weapon against accidental discharge. In fact, the SAFE ACTION® system makes GLOCK pistols safer than most revolvers carried by law enforcement officers for many decades. In essence, a GLOCK shoots only when the trigger is very deliberately pulled. Shooters can maintain situational awareness instead of having to focus on their pistol to release safeties, cock a hammer, or rack its slide when faced with an immediate threat.

I had the opportunity to meet many of OPD’s top-notch officers, including Steve Toribio, Chris Saunders, Billy Burke, Jon Vanerwegen and Joe Villalobos. Each officer maintained a great, professional attitude and demonstrated superb skill, whether in cruisers patrolling the streets, training other officers, or keeping watch over Oakland from high above. OPD officers have the training, ability and confidence with their GLOCK to keep themselves and the East Bay area safe. 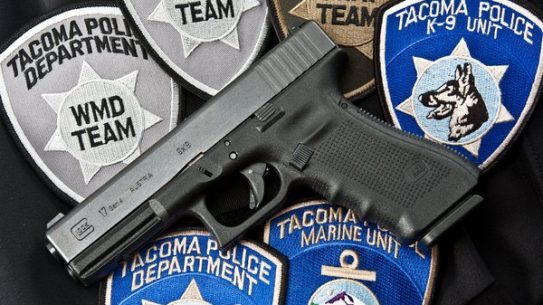