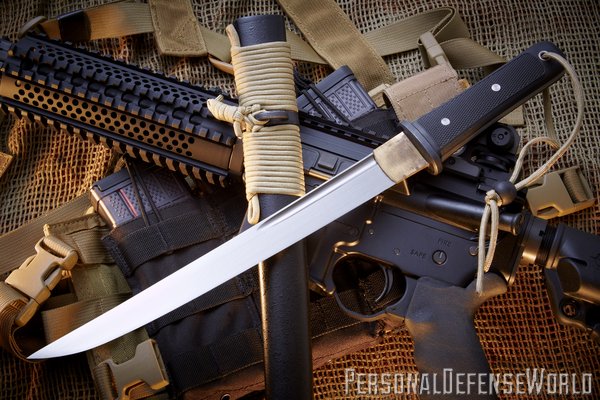 Whether for military or civilian use, the Tactical Tanto is an imposing knife, perhaps more rightly classed as a “shorter short sword.”
Comment(s)

“Whether the knife falls on the melon or the melon on the knife,” goes the old African proverb, “the melon suffers.” And though the CAS Hanwei Tactical Tanto isn’t intended for cutting melons, it could certainly cause some suffering in an attacker. This is a big, functional fighting knife that is essentially a shorter short sword, owing its design to traditional Japanese sword patterns.
According to lore, the samurai of feudal Japan generally carried both a long sword, the katana, and a short sword, the wakizashi. An even shorter sword, also classifiable as a long knife, was the tanto, sometimes carried with the katana in lieu of the wakizashi. While we’re playing a bit fast and loose with the history, the wakizashi, being longer than the tanto, won out in popularity because it was the more effective weapon for fighting indoors (where the longer katana was also less suitable). However, the tanto was carried by members of the imperial court during the Meiji Restoration. It eventually fell out of favor along with the rest of these Japanese blades following World War II, when restrictions on the manufacture of swords were imposed.

Post-WWII Tanto
Interest in the tanto and designs derived from it arguably stem from the popularity of Japanese martial arts in the U.S. This was propelled largely by American soldiers who brought the systems back to the U.S. following WWII. As the martial arts scene in America expanded to encompass other systems and national origins (the 1970s, in particular, saw an explosion in the popularity of Kung Fu thanks to the proliferation of often silly Kung Fu movies imported from abroad), three blades became essential gear to students of the martial arts. One was the throwing star, progeny of the 1980s “ninja” boom. The other two were the butterfly knife, or balisong, and the “samurai sword,” or katana.

If butterfly knives were the sidearms of ’70s- and ’80s-era martial artists, then katanas were their “assault weapons.” You were no martial artist if you did not have a samurai sword on your mantle—preferably you had a two- or three-sword set. The two-sword set was, as one might guess, the katana and wakizashi, while three-sword sets in tiered stands included the tanto.
It is only in relatively recent years that we had widespread awareness of what makes a sword blade functional—properly heat-treated carbon steel—which prompted manufacturers of modern samurai swords and fantasy blades to offer “real” swords. Today’s knife and sword manufacturers serve a much more informed market. Consumers generally know what they’re looking for in blade steel. They make discerning choices concerning function and form, which means they will consider not only the appearance of the knife but also the materials it’s made from and its carry system. It is for this market that CAS Hanwei is offering a series of popular, functional, “tactical” blades derived from Japanese patterns but incorporating modern materials and design concepts. The latest of these is the Tactical Tanto.