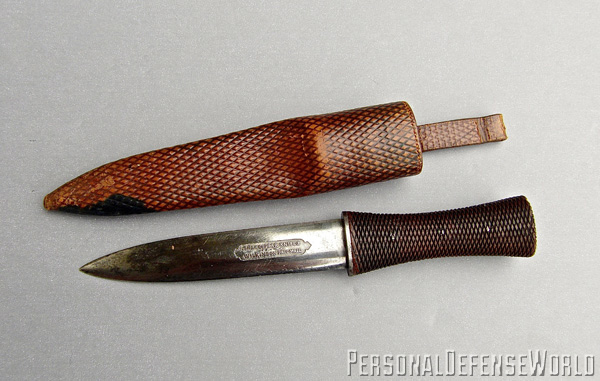 The Wilkinson Shakespear knife with a 6-inch blade. Note that the sheath is leather instead of wood and does not have the spring lock used with the larger knives.
Comment(s)

Major Henry Shakespear was an Indian army officer who was a well-known shikari, the Indian term for “hunter.” Much of Shakespear’s hunting in India took place in the mid-19th century, before the advent of repeating arms. Although many hunters in India carried double-barreled percussion Howdah pistols as backups to their rifles, Shakespear seemed to have also liked a double-edged dirk, which could be used at close quarters.

Based on his experiences, Shakespear developed a set of requirements for what he considered a perfect hunting knife. He required a knife with a double-edged, 7-inch blade that was “fluted” (i.e., had a blood groove), 1.5 inches broad and very sharp. He also gave special attention to a sheath that allowed rapid access to the knife. Retention came from a spring in the sheath, which could be depressed with the finger while drawing the blade. Shakespear did not specify a belt loop, as he intended the sheath to be attached to the buttonhole of the hunting coat’s pocket via a button on the sheath. In actual production, both the sheath and handle were of wood.

Read more in the November 2013 issue of Tactical Knives… 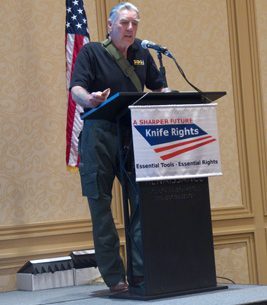