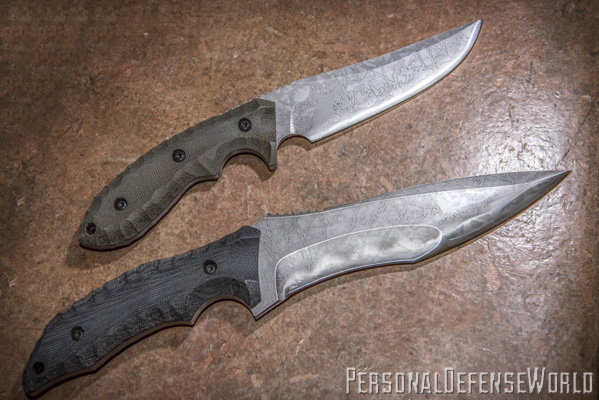 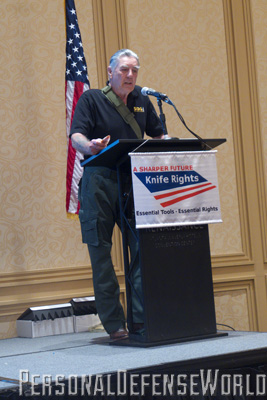 2 of 3
Gunny_Blade2013_01 copy
The Gunny, R. Lee Ermey, chews the fat with patrons of the 2013 Blade Show, answering questions about his Marine experiences and movies. 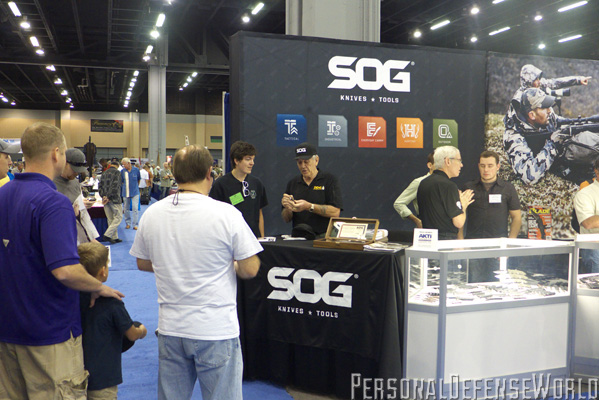 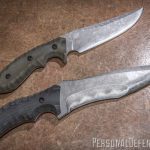 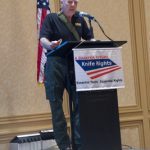 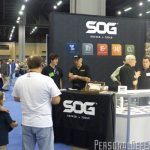 TK: What was your latest mission?
After the Blade Show in Atlanta, I had the chance to fish with a buddy for a couple of days in the grab-bag, easy-and-fun way I grew up with, on slow, muddy rivers where every cast might get you a different fish—crappie, bass, catfish, bluegills (“brim” to folks down there). We caught ’em all! The filleting knives went to work, and we had a heck of a fish fry. I loved it.

TK: How was the Show?
As you would expect from the biggest knife show going, they had knives of every type and maker, for every purpose. I especially enjoy seeing all these old boys from the country, out there in places like Arkansas, Alabama, Kentucky, bring in the customs they’ve been working on for months at home. They work in the little shops out behind their houses. Every evening, after supper, they get back to work on their new creation. Sometimes it takes 100 hours. They design the knife, from the tip to the butt. They take a piece of metal and a piece of bone, and the next thing you know, they have a work of art. They take tremendous pride in their products and craftsmanship—something America needs a lot more of these days.

TK: Did you buy anything?
I bought one and had one given to me. They are Kiku Knives, true works of art from the highly-respected Japanese maker Kikuo Matsuda. These are both fixed blades, and the one he gave to me is a treasure. But I considered the second blade to be an absolute masterpiece when I first saw it, which was early in the morning before the show opened. That’s the only time I have to actually see stuff at shows. Anyway, I kept thinking about it all day at the show. Finally, as the show was ending, I had 30 minutes to myself and strolled down to his table and bought the knife.

TK: Were the lines of people who wanted to meet you very long?
There was about a one-hour line constantly. As always, it was very gratifying to meet folks and have pictures taken and chat with them, mostly about Marine experiences and my movies. I noticed that more people than ever now bring up my Mail Call TV show and the Lock ’N Load show that followed it. I hear the question from about 75 percent of the people: “What happened to Mail Call?”

TK: What did happen to Mail Call?
The History Channel cancelled new production of the Mail Call show after 100 episodes, which ran from 2002 to 2009. For a time we were their highest rated television series. The regime in charge at the network at that time thought that America was dealing with an unpopular war, and they didn’t want a weapons show anymore. After they pulled it off the air, about a year later, due to popular demand, we tried another similar show called Lock ‘N Load for a season. That was cancelled as well, and for the same reason, as History was re-branding their network away from military content. However, you can still watch reruns of both shows on H2 and History International.

TK: Do you have a new book for us?
I certainly do, and it’s a hell of a good read. It’s called Don’t Tread on Me!, and it’s a big book, and it’s by H. W. Crocker III. The subtitle is A 400-Year History of America at War, from Indian Fighting to Terrorist Hunting. This is lively, interesting reading, written with a flair and pace I wish more history books had. In particular, I was interested in my war, Vietnam, and the way Crocker exposes the way our liberal-controlled Congress pulled the rug out from under our military effort when we were winning the war. I can’t recommend this book strongly enough. You can get it in softcover, hardcover or Kindle from amazon.com or other Internet sites.

TK: You’ve flown with a lot of bush pilots. If you were a bush pilot yourself flying in the wilderness country of Alaska, Canada or the U.S. Rocky Mountains, what kind of knife would be in your survival kit?
I would be carrying a pocketknife, and in the bag, along with my gun, food, first aid and fire-building stuff, I would have a Marine World War II machete. We’ve talked about this knife before in this column. It has a sharp point, unlike most machetes, good for stabbing when you need stabbing, like for a bear attacking you. The 8-inch blade is very thick. It holds a good edge and will chop down a tree or filet a fish. You can use the back side of the single-edge blade like a hammer. This is the machete the Marines used all over the Pacific in World War II. One knife for everything? It has to be the machete. I’m currently working on designing and building a knife that improves upon that Marine machete.

TK: In your 60-plus feature films, you’ve done just about every kind of part. But you were never a mountain man. Why is that? Seems like you would have been a natural.
Nobody has asked me. It’s that simple. I would jump at the chance to get a mountain-man part. Maybe one will still come along, but don’t hold your breath. Hollywood isn’t making a heck of a lot of outdoor-action movies these days. I guess the American public is becoming too citified.

TK: What’s the worst thing you ever did to yourself with a knife?
I stabbed myself in the leg when I was a kid, eight or nine. I was trying to whittle a model airplane and was having trouble cutting through the piece of wood with the Case pocketknife my great grandfather had given me. So I laid the wood against my leg to steady it, and the blade slashed right through the wood into my leg. I’m looking at the scar, a 3-inch gash, right now. Back in the Kansas farmlands, you didn’t head for the emergency room with something like that. My mother flushed it out with grain alcohol; bandaged it up. Life went on. That’s how we learn.

TK: The Army does not have recruit training with bayonets on rifles anymore, although there is training to use bayonets in hand-to-hand combat and as tools. In places like Afghanistan and Iraq, we never see infantry troops on patrol with bayonets on their rifles. Why do the Marines continue training recruits with fixed bayonets on their rifles?
Rifles used to take a long time to reload, hence the bayonet was born to keep troops in the fight at close quarters. When you’re nose to nose and toe to toe, you’re not going to say, “Excuse me, while I reload my rifle.” Today, reloading time and running out of ammo, with the enemy coming over the berm, right in your face, still require an emergency, last-ditch weapon. The bayonet is it! The Marines want troops trained to fix bayonets and use them to both threaten and kill the enemy in a charge and to repel the enemy when being overrun. These troops may never have to fight with their bayonets, but if the time does come, they damn sure will know how to do it! 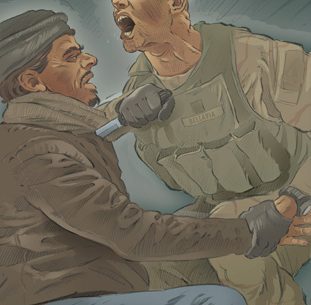 It Happened To Me – Fire and Blades