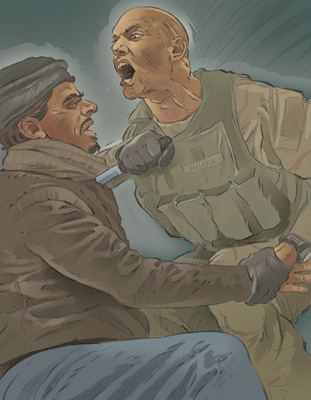 “...Bellavia climbed the stairs to confront a fighter, armed with an AK, who ducked into a bedroom. Bellavia fragged him, then burst into the room to find him still full of fight.”
Comment(s)

An infantryman’s guns, knives and impedimenta are cataloged as “weapons,” but the true weapon is the infantryman. Hardware is only part of his arsenal. Will, an item of neither issue nor purchase, is the most important asset. A reservoir of will he didn’t know he had, and a Gerber folder he nearly forgot he did, were the unfailing tools that enabled Staff Sergeant David Bellavia to prevail in a fight to the death in Fallujah, Iraq.

In 2004, civilians had evacuated the city that hid thousands of well-trained, well-equipped, mostly experienced Muslim fighters assembled from Asia and the Middle East. They came to die for Allah while taking as many American troops with them as possible. In night combat, even ordinary activity was dangerous, as though the gods of war delighted in bewildering the troops, who fought for days under enemy fire, with scant sleep or rations and under threat of ambush and IEDs. Charging through a danger zone during night MOUT operations, one of Bellavia’s men stepped into coils of electrical wire, which snarled around him like a trap. A comrade had a wire cutter, but as the coils were cut, they would spring around and entangle both the soldiers. Being ensnared in a kill zone in the dark as a firefight begins is not good. Bellavia pulled a Gerber folder from his pocket and helped saw through coils of wire as firefights escalated nearby and to the west. Finished, Bellavia clipped the folder to his belt.

The blade came in handy again when he was clearing a house that turned out to be a bomb in itself, packed with explosives and large propane tanks, with a maze of tripwires. Bellavia also used his Gerber to emplace blocks of C4 near individual mines, and he later used it to check an enemy casualty for signs of life. One night in November 2004, units of Bellavia’s 2nd Battalion, 2nd Infantry Regiment were fighting their way through insurgent-controlled Fallujah—block by block, then house to house, then room by room, then man by man. When the tools of modern combat failed, ran dry or were not in reach, the desperate, personal fight continued. In darkness, soldiers wrestled on floors slippery with the blood of combatants, with blunt objects, teeth and bare hands.

Bellavia’s unit had nearly finished clearing a block where houses were larger and well kept. The houses searched here proved empty. The men then came to a larger, multi-storied house that comprised a lovely fortress, something Bellavia would later describe as a “perfect summer getaway for a drug cartel.” The door was steel with decorative glass—tough to breach. Troops formed a stack, and the best breacher came forward, but the door was unlocked. The stack rushed into the foyer and well-appointed living room, to find not a soul. But an adjoining door, they soon found out, offered a gateway to hell. The soldiers had been suckered into an artfully engineered, well-fortified, massive ambush that cut off their means of escape—they were trapped in a kill zone.

The ambushers had installed 3-foot concrete Jersey barriers for cover and were armed literally, as Bellavia would discover, to the teeth. Entry-team SAWs ran dry, and machine-gun duels ensued between various insurgent belt-feds, the men inside and those trying to provide covering fire from outside. In an untenable position, Bellavia ordered his men to exit the building. He grabbed the best-maintained SAW and with a fresh belt stepped into the fatal funnel, firing long suppressive bursts to keep the insurgents down so his comrades could sprint, one by one, across the kill zone and out the door.

As hard-worked SAWs are wont to do, Bellavia’s ran away, firing its last 50 or so rounds in a single burst. While the insurgents’ heads were down, he sprinted out the door. Outside, his unit was effectively pinned down by automatic weapons fire. Their SAW and M240 belt-feds continued suppressive fire against the enemy. They called in a Bradley, which was of limited use in the cramped quarters but did what it could against the building.

The enemy remained, so Bellavia grabbed his few remaining troops and again stormed the house, where water murky with blood covered the floor. They fought room to room. Down to his last magazine, Bellavia climbed the stairs to confront a fighter, armed with an AK, who ducked into a bedroom. Bellavia fragged him, then burst into the room to find him still full of fight. The flames from the burning mattresses revealed stacks of propane tanks, and Bellavia smelled gas. Using their rifles as clubs, their life-and-death struggle went to ground. In the dark melee, both men lost their rifles, but Bellavia pinned the enemy to the floor, beating him with his 5-pound front armor plate then with his Kevlar helmet, kicking, biting, eye-gouging and fighting to the death like caged animals. The enemy drew a pistol, fired and missed, losing the gun in the chaos.

Remembering the Gerber folder on his belt, Bellavia knelt slightly above the man he was pummeling on the floor, who then reared up, grabbed Bellavia’s genitals in his teeth and bit down hard. Numbed with the pain, Bellavia pummeled his tormenter on the head with the closed knife, breaking the grip on his privates. He felt warm blood running down his leg as he flicked open the blade and repeatedly stabbed his enemy under the collarbone, burying the blade to the hilt, cutting an artery and waiting.

Bellavia retrieved his M4 and ran it dry. He then took the deceased enemy’s AK and ran that dry as well. He went back a final time for his M4, and ran out the last dregs of part magazines. He heard his men downstairs. Knowing they were hard-wired and adrenaline-pumped to shoot anybody without a helmet, he did the logical thing. He sat down, fished out a Marlboro Red and fired up a smoke.

Staff Sergeant David Bellavia received the Silver Star and the Bronze Star and was nominated for the Medal of Honor and Distinguished Service Cross for his actions in Fallujah. He was awarded New York State’s highest award for military valor, the Conspicuous Service Cross. His story is told in House to House, a Soldier’s Memoir. 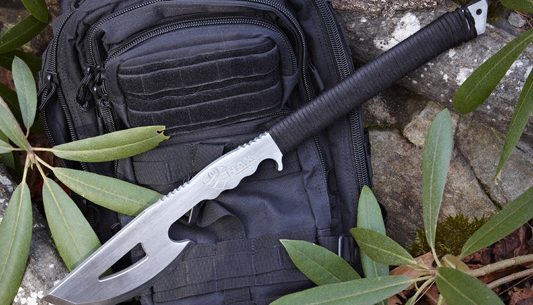 An infantryman’s guns, knives and impedimenta are cataloged as “weapons,” but the true weapon…