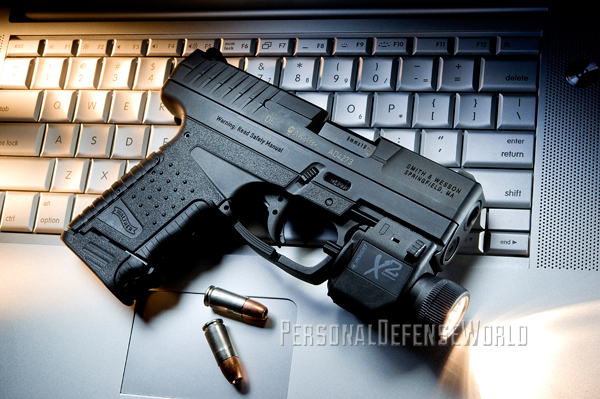 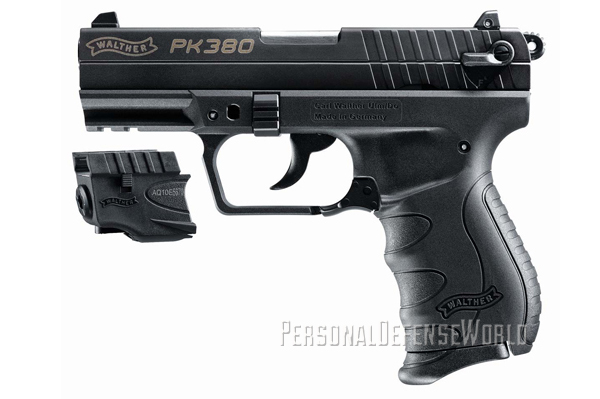 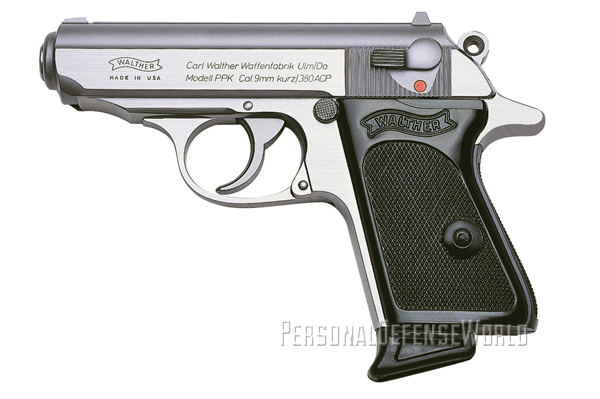 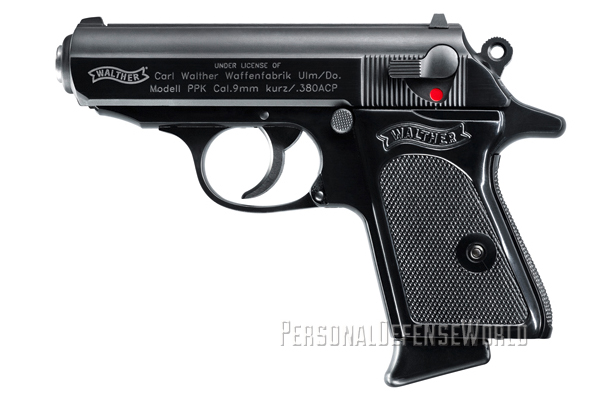 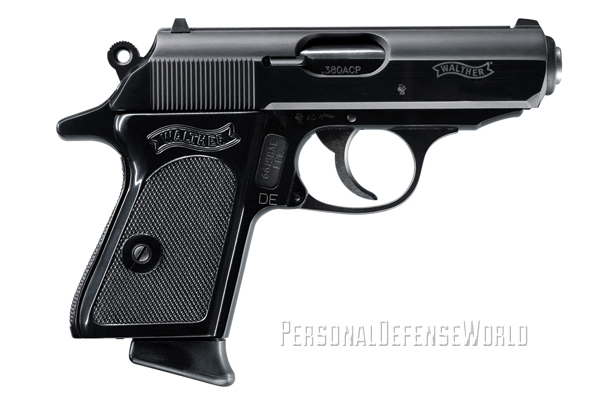 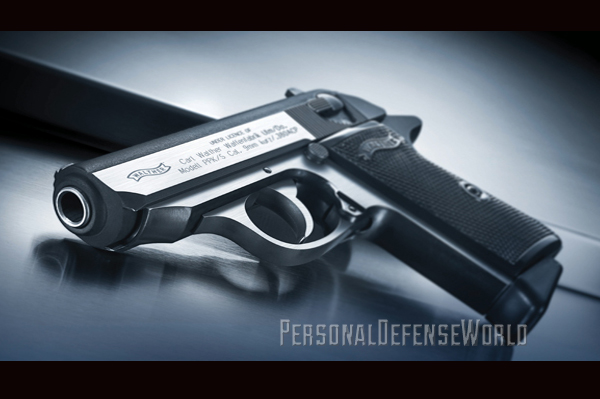 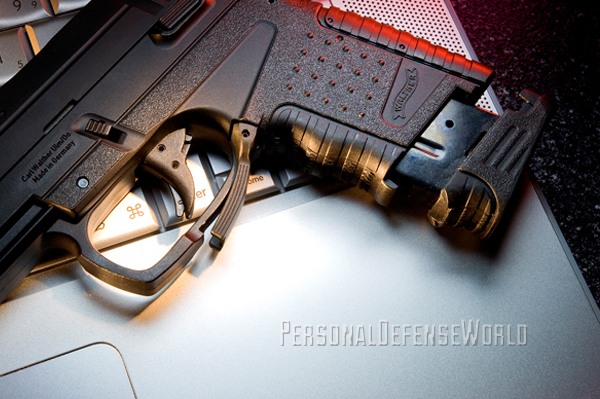 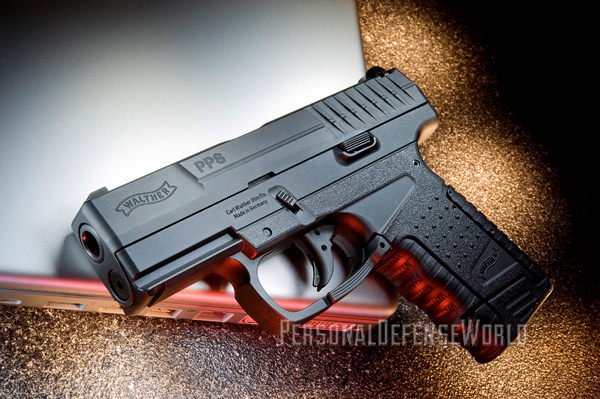 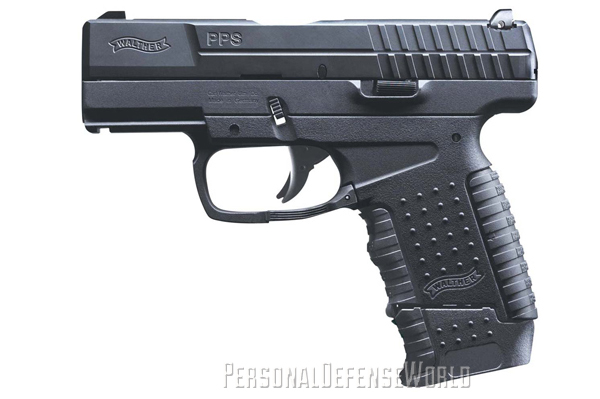 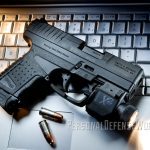 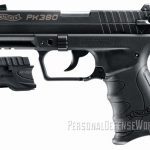 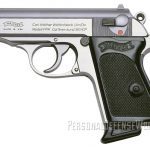 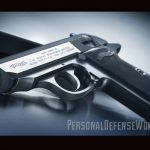 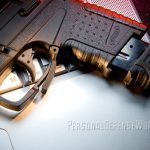 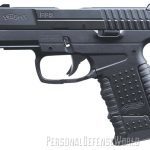 Pocket pistols first appeared in Walther’s product line in the early 1900s, making them one of the very first firearms companies to manufacture compact pistols. The DNA of those early compacts is present in Walther pistols today, especially in the PPS, which brings Walther’s designs squarely into the 21st century. Part of Walther’s heritage involves pushing the envelope in manufacturing techniques and design, and that is exactly what has been accomplished with the impressive PPS pistol.

Next-Gen Power
For those shooters who want more bang in their pocket pistol, the PPS chambered in 9mm or .40 S&W is a near-perfect combination of concealability and raw firepower. Not much larger than the company’s PK380 or PPK pistols, the PPS pocket pistol uses a larger round and remains thin—less than an inch thick. That means less bulk to conceal. The PPS has a no-nonsense look and sports a matte black Tenifer finish that is highly corrosion resistant. The PPS uses a polymer frame that offers what Walther calls a QuickSafe backstrap, which comes in two sizes for a custom fit to your hand and, when removed, can completely disable the pistol’s firing. No tools are required to remove the backstrap. The PPS’ trigger safety requires the trigger to be pressed fully to discharge the pistol. It is a striker-fired system with about a 6-pound trigger pull. A cocking indicator slightly protrudes from the rear of the pistol and can be both seen and felt. It also features a loaded-chamber indicator, which is a small viewport that shows a round in the chamber. The three-dot sights are big, bold and easy to use when acquiring a target. The sights are made of steel, making them more durable than polymer sights. Like the PK380, the PPS magazine release is ambidextrous and built into the triggerguard. For those who like options, there are three magazine sizes, from ones that hold six 9mm or five .40 S&W rounds flush to the butt, to extended versions that hold up to eight 9mm rounds or seven .40 S&W.

PK380 With Laser
Another cutting-edge Walther design is the PK380. It is built with a polymer frame and steel slide and barrel. On picking up the firearm, the first thing you will notice is how good the grip feels in your hand. For both petite female shooters and hulking brutes with hams for fists, the naturally pointing PK380 will feel right. A finger rest is built into the magazine floorplate so your small finger—if you have a big hand—does not dangle off the bottom of the grip. The PK380 has an angular, aggressive look, a departure from Walther’s PPK models that often appear more svelte.

The controls consist of an ambidextrous safety mounted on the slide near the thumb of either a right- or left-handed shooter. Flip it up to fire the gun, and rotate it down to put it on safe. The magazine release is also ambidextrous and built into the triggerguard, so it is easy to release the magazine with whatever hand you shoot with. The trigger is traditional DA/SA: The first shot is double action, which requires more effort to press the trigger, then once the round is fired the action goes to single-action, which requires a lot less effort to press the trigger. The DA pull on the PK380 is 11 pounds, and the SA is 4 pounds. Having a DA pull on the first shot is smart, especially when using the pistol in the high-stress situations it was designed for. Logically, the more effort it takes to pull the trigger, the harder it is to accidentally fire the pistol. The PK380’s hammer is exposed, allowing the shooter to manually cock back the hammer to fire in SA mode or to carefully grasp and control the hammer to lower it.

The sights on the PK380 are large and easy to align, especially with the three-dot system. The rear sight can be drifted for windage adjustments. The laser sight mounted on the accessory rail makes the PK380 easier to shoot quickly and accurately from unconventional shooting positions. A sliding switch turns the laser on and off, and when the laser is turned on, two red lights facing the shooter inform you that the red dot is activated. This is a nice feature, particularly when using the sight in bright daylight, where it can be hard to see the red dot projected on the target. Normally, the only way to tell if the laser sight is activated is to see the projected dot, but with the Walther the two red lights on either side of the laser unit inform the shooter the laser is on. The laser sight can easily be removed from the PK380 by pulling down on two tabs on either side of the unit and pulling the unit forward and off the accessory rail.

There is not a lot of ramp-up time required to start shooting the PK380 well. First, the magazine is easy on the thumbs and cartridges effortlessly insert into the mag. Second, the slide is easy to rack—important for a pocket pistol, as the slides on smaller pistols can be more difficult to pull back. Third, chambered in .380, the PK380 is easy to control even for less-experienced shooters. And fourth, the laser sight is perfect for aiming the pistol from unorthodox shooting positions.

PPK and PPK/S
The Walther Model PPK (Polizeipistole Kurz) was one of Walther’s early designs, and today the PPK is iconic. The pistol is still extremely popular today with LE agencies as a backup gun and with civilians who carry concealed. The German military used it extensively during World War II, and Ian Flemming armed his famous spy, James Bond, with the PPK.

The PPK and the longer-framed PPK/S both employ a steel frame, slide and barrel—old school for sure, but ever so effective. They have a DA/SA trigger system and hold 6+1 and 7+1 rounds of .380 ACP respectively. A trademark feature of the PPK and PPK/S is the decocking safety lever. With the hammer cocked all the way back, the safety is rotated downward, decocking the hammer and allowing it to fall against a block that is part of the decocking lever. These models also have loaded-chamber indicators that can be seen and felt in the dark if need be, telling the user a round is in the chamber. Both models are available in a matte stainless steel finish or a traditional deep blue.

Walther pistols have a reputation for high quality. The PPK and PPK/S pistols are reliable and concealable pocket firearms that have, after 80 years, stood the test of time. And now the PK380 and PPS pistols—newer designs employing high-tech manufacturing and ergonomics—will serve as Walther’s next-generation pocket pistols. For more information, visit http://www.WaltherArms.com or call (479) 242-8500. 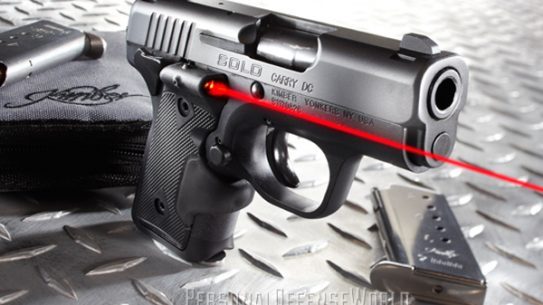 Ultra-compact companions, Kimber pistols are ready to protect in the dead of night!