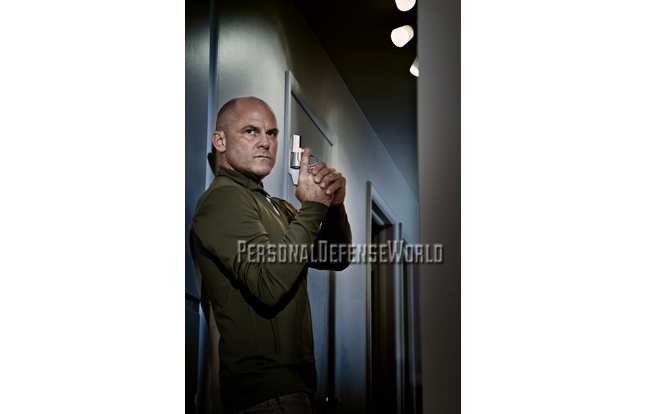 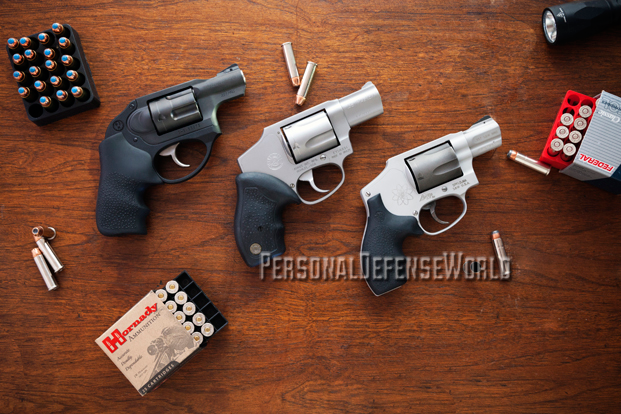 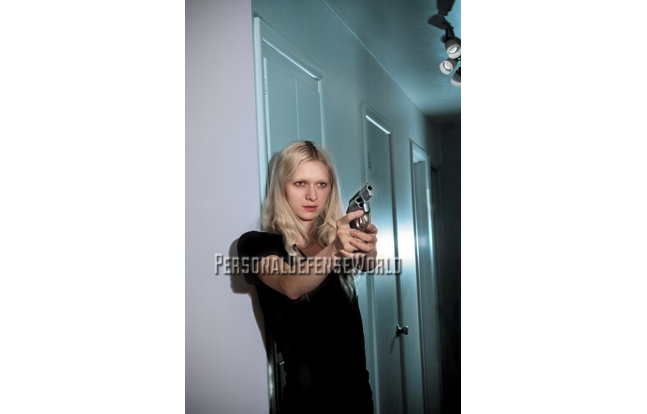 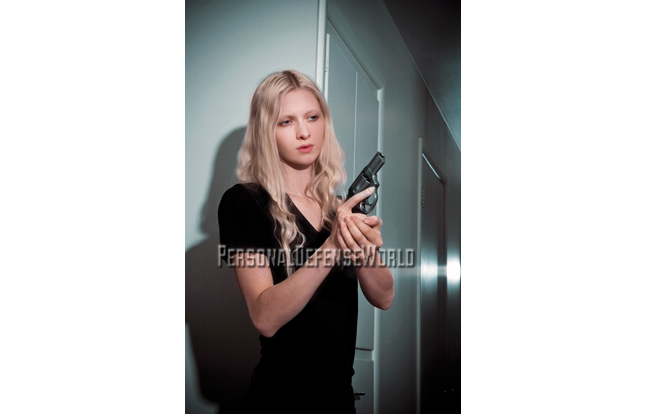 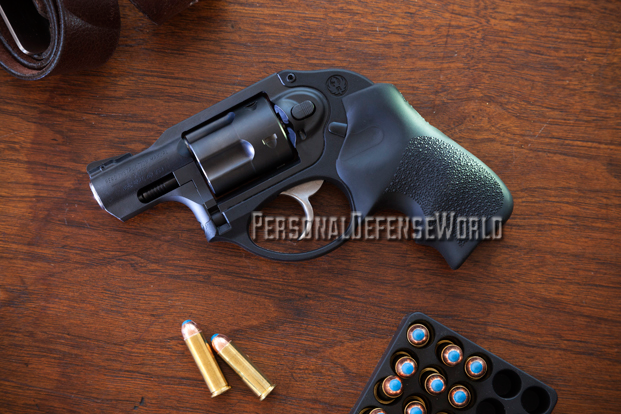 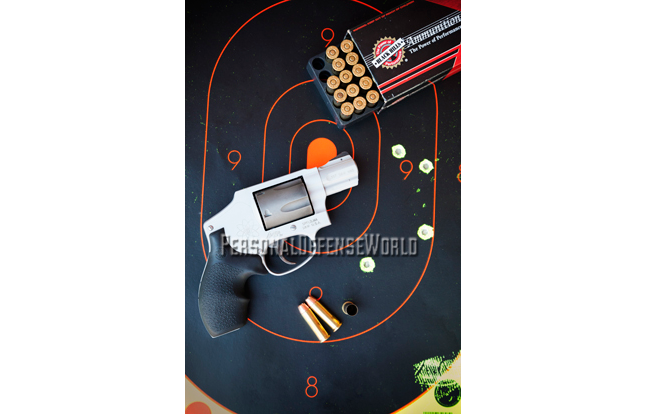 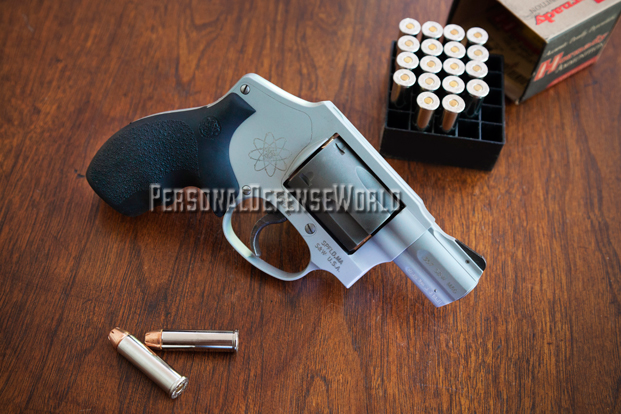 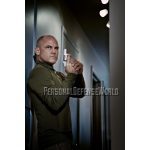 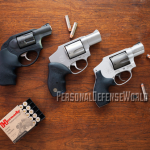 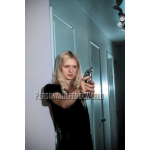 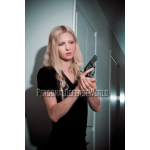 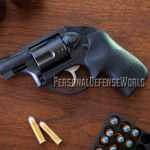 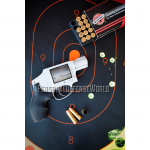 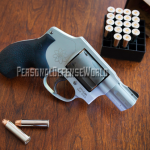 The little .357 Magnum revolvers tuck nicely into the pocket of my jeans, where they ride all but unnoticeably

Back in the day, before small autoloaders became so popular for concealed carry, snubnosed “belly guns” pretty much ruled the roost. Usually chambered for the then-extremely popular .38 Special, these short-barreled revolvers were compact enough to be carried in a pocket, which helped enhance their popularity. With no manual safety to fuss with, these snub guns were a pretty much a “point and shoot” proposition.

The only problem with standard .38 Special revolvers was the hammer spur, which had a tendency to hang up on the lining of a pocket when you drew the gun in a hurry. Smith & Wesson first addressed this problem in 1950, when it introduced the Model 649 Bodyguard. This snubnosed revolver was offered with three different hammer designs: an exposed-hammer model called the Chief’s Special (reminiscent of today’s iconic Model 60), the Centennial, with the hammer fully enclosed, and the Bodyguard with its shrouded hammer.

Let me clarify something: Short-barreled revolvers lacking an exposed hammer you can easily cock are conventionally known as “shrouded hammer” guns. True “shrouded hammer” guns actually enclose most of the hammer but have a narrow notch exposing a vestigial thumb piece that allows you to manually cock the gun. This notch allows lint or other detritus to find its way into the mechanism, too, and the grooved or checkered hammer spur can conceivably snag when drawn from a pocket.

I prefer guns with their hammers fully enclosed. While the trio tested for this review fit this category, I still prefer “shrouded” to “fully enclosed” hammers when referring to these guns. “Fully enclosed” seems awkward.

Defensive Trio
The guns I’ve been testing include the Taurus 650SS—a matte stainless steel revolver that, at a shade over 24 ounces, is the heaviest of the three. That heft becomes handy when you shoot .38 Special +P loads or full-house .357 Mag ammunition. That, plus a hand-fitting rubber grip, keeps felt recoil at a minimum. Unfortunately, it is no longer in production, but to find one, you should check the used markets.

Like all three snubbies I used, the Taurus’ cylinder holds just five rounds. That keeps the gun’s width to 1.37 inches. Hopefully, five rounds will be enough to do the job.

Trigger action is important on any handgun, but the double-action-only (DAO) triggers found on the three snubbies I tested are particularly vital. The Taurus 650SS boasted a relatively smooth trigger pull with noticeable stacking at the end. This makes it possible to anticipate when the trigger will actually “break,” giving you a moment to make sure the sights are properly aligned. I couldn’t measure the weight with the RCBS trigger scale I have, but I would estimate it to be slightly north of 10 pounds.

I also put Ruger’s LCR in .357 Mag/.38 Special through its paces. This slick-looking revolver features a frame made of 400-series stainless steel, while the barrel and cylinder are made of 465-grade stainless steel. The gun is treated with Ruger’s durable Target Grey finish, giving it an attractive, matte black appearance. Its trigger pull was very smooth, with only very slight stacking. Again, it took just over 10 pounds of pressure to cycle the trigger, but this felt very controllable.

The LCR features a Hogue Tamer Monogrip to help reduce recoil. The revolver’s width is just 1.28 inches, while the gun tips the scales at 17.1 ounces unloaded. Unlike most double-action revolvers, the cylinder is unlocked by pushing straight down and back on the release lever. This lever was very stiff at first, but it loosened up with use. At $599, the LCR costs only slightly more than what the Taurus snubbie cost.

If you want a hard-hitting handgun you’ll barely know is in your pocket, Smith & Wesson’s Model 340PD is the clear way to go. This high-tech handgun sports a scandium alloy frame and a cylinder made of titanium. The result is a .357 Mag revolver that weighs a scant 11.4 ounces unloaded.

As you might expect, this zephyr-light, five-shot revolver is a force to be reckoned with when you’re firing magnum or +P ammunition. Extended practice sessions are just too painful when you stoke this gun with maximum loads. That’s what .38 Special fodder is for. Another thing that’s painful is the gun’s recommended retail price. At $1,019, it’s nearly twice as costly as the other snubbies mentioned here. Is it worth it? If you want something you can slip in your pocket and practically forget it’s there, the price isn’t all that steep. Smith & Wesson handguns are famed for their reliability, and that’s important when your life may be on the line. For the record, revolvers are much less prone to jamming.

Range Performance
Toting these guns in a pocket or belt holster may be just fine, but what about their potential for home defense? When you’re shooting across a room, distances are limited. That’s where these compact revolvers shine. When you’re firing at 10 yards or less, you should be able to strike centermass if you’ll put in the necessary practice. Forget about aiming anywhere else (the assailant’s leg, arm or whatever), and don’t fire just once—keep shooting until the target is clearly out of action or your gun clicks empty.

All three revolvers feature fixed sights. Rear sight tunnels are integral parts of the topstrap. The Ruger and S&W front sights are pinned in place, while the Taurus sight blade is machined from the aluminum frame. The sights are easy to see.

What ammunition is best? All three of the snubbies tested yielded similar velocities—not surprising, as the barrels were virtually the same length. At an even 2 inches, the Taurus tube was slightly longer but delivered only a few fps greater speed.

You can see that .357 Mag loads produce more than 100 fps greater velocities than .38 Special ammunition provides. That translates into extra force at both ends. How much force? Federal’s 125-grain .38 Special rounds from a 2-inch barrel strikes with 145 foot-pounds of energy at point-blank range, while the same basic load in .357 Mag persuasion ups the ante to 250 fpe. That’s an increase of 58 percent.

Recoil? There’s little question these lightweight guns firing full-house.357 Mag ammunition can be a real handful to shoot. Lighter-kicking .38 Special rounds are easier on your hands, and that usually translates into better accuracy. Smith & Wesson’s scandium/titanim hybrid is the lightest of the trio, which makes it the hardest to shoot with real precision. Putting five Federal .357 Mag 125-grain rounds through this gun in quick succession requires a certain amount of fortitude. Call me a wimp, but the first two rounds truly hurt my hands—“stung” wasn’t descriptive enough! Gritting my teeth, I fired the remaining three rounds in the cylinder.

The target was 15 yards downrange, and I was firing from the off-hand position. I was pleasantly surprised when the group measured an even 6 inches, center to center. The bullet holes stretched in an uneven line extending from left to right. That’s hardly target-grade accuracy, but it proved I could direct a cylinder full of magnum loads to a bad guy’s center mass.

I switched to the heavier Taurus snubbie and fed it 125-grain Black Hills magnum loads. Results were more satisfactory. The gun was absolutely painless to shoot, and the V-shaped group measured just over 4 inches across. The Ruger was also kind to my hands, thanks in part to its well-designed rubber grip and excellent ergonomics. The test group with 125-grain Federal magnum ammo made a 5.25-inch spread.

While conventional .38 Special and .357 Mag loads have proven highly effective over the years, I also got my hands on a box of .357 Mag Glaser Safety Slug ammunition. Lacking a block of ballistics gelatin, I was unable to evaluate how this interesting ammo performed. The projectile consists of No. 12 shot compressed into a nearly solid form. The shot pellets are designed to disperse immediately after impact. This reduces the chance of overpenetration and creates a devastating wound cavity.

Covert Carry
While I have a concealed carry permit and an array of quality 1911s and other defensive handguns, I find myself toting shrouded-hammer .357 Mag snubnosed revolvers more often than not. I dislike carrying a bulkier, heavier handgun on my hip. The little .357 Mag revolvers tuck nicely into the pocket of my jeans, where they ride all but unnoticeably. I’m barely aware I’m carrying a gun, which means I’m more likely to have one when it’s needed.

Two-legged varmints aren’t the only reason to go “heeled” these days. One of my grown sons is addicted to mountain biking, and he has recently encountered two different cougars on the high-altitude trails he rides. Mountain lions locally are losing their fear of people, and attacks aren’t unheard of. A bike whizzing by on a mountain trail may trigger the carnivore’s instinct to chase and take down this unusual prey. I gave my son one of my .357 snubbies to carry when he rides. He and I now both feel better in his ability to defend himself from hungry cougars. 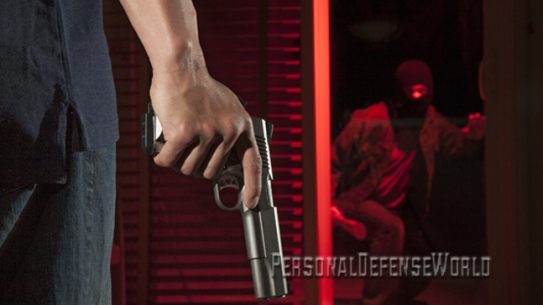