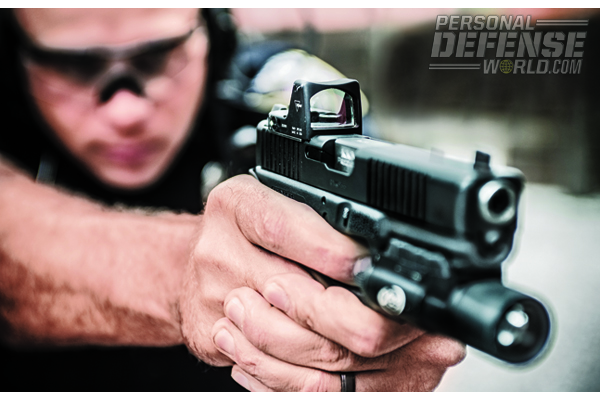 1 of 2
Red-Dot Sights Domination 1
As the combat handgun evolves to accept more and more accessories, emerging lines of durable red dot optics are being seen as viable enhancements for sidearms in the field. 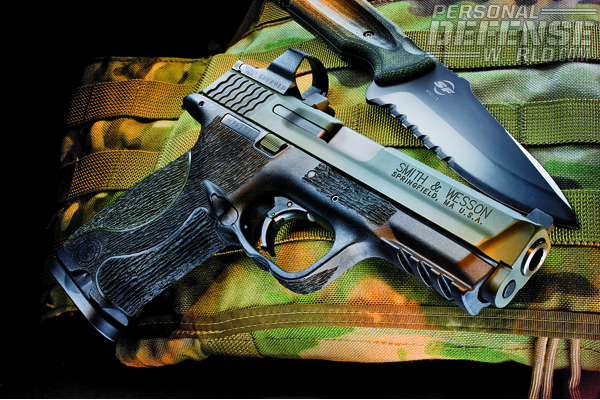 2 of 2
Red-Dot Sights Domination 2
David Bowie of Bowie Tactical Concepts has been at the forefront of mounting red dots on service pistols. Bowie mounts a high rear sight in front of the optic. 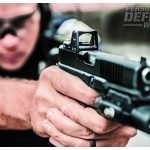 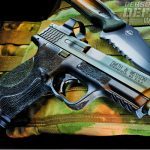 The influence that competition gear has on real-world gear, and in some cases vice versa, is intriguing. Red-dot sights have come a long way from the clunky, heavy beasts they were in previous years. Like computers and cellphones, red-dot sights have benefitted from advancements in circuitry and power management. One of the best examples is the Aimpoint Micro T-1, a red-dot sight that is 2.4 inches long and 1.4 inches in diameter, weighs a mere 3 ounces, and is powered by a single 3-volt battery that provides over five years of continuous life.

The red-dot first went mainstream in 1997, when the U.S. military fielded its first Aimpoint sight. The initial users were in the special forces community, but the sights, like other gear, eventually saw wider use. With the red-dot offering rapid target acquisition and improved accuracy in all light settings, today thousands of Aimpoints and EOTechs are being fielded by U.S. Army personnel. And law enforcement agencies worldwide have followed the trend.

In the past few years, more and more shooters have been asking, If red-dots work on long guns, why won’t they work on pistols? I took the question one step further: Are red-dots appropriate for a self-defense application?

Several years ago, I evaluated for Combat Handguns the FNP-45 Tactical, which was developed for the U.S. Joint Combat Pistol program and featured an optics-ready slide. We had mounted a tritium-powered Trijicon RMR red-dot on the pistol and found that the system worked well, even though the FNP-45 Tactical was very large. This project only increased my interest in pistol-mounted optics.

Bowie Tactical Concepts
For Personal & Home Defense, I started with a call to David Bowie of Bowie Tactical Concepts. David has an extensive law enforcement and firearms training background and is the commander of his agency’s SWAT team. David also has a close relationship with Ken Hackathorn and Dave Spaulding, respected trainers that I feel fortunate to call personal friends.

Through Bowie Tactical Concepts, David has been a trendsetter in combat modifications on Glocks, S&W M&Ps and XD-Ses. He was an early pioneer in mounting optics to duty/self-defense pistols and has been running an optic on his duty pistol for several years. David currently offers a complete line of frame modifications for the Glock and Springfield along with slide treatments and internal upgrades. And his bark-line frame treatments are both functional and attractive.

After a couple of conversations, I sent David a stock, 9mm S&W M&P that I had in my safe and asked that he set it up for an optic and do a “duty” trigger job. Next I needed to decide whether to mount a Leupold DeltaPoint or Trijicon RMR sight onto the M&P. David stated that he preferred the DeltaPoint due to its wider screen and optional triangle reticle. So I called Leupold and ordered a DeltaPoint. It turned out that, at the time, demand for the DeltaPoint vastly exceeded production, resulting in significant delays. The DeltaPoint I received had a round dot, so I was unable to evaluate David’s take on the triangle reticle.

The DeltaPoint is a dual-use optic that can be mounted on a rifle, shotgun or pistol. The DeltaPoint is powered by a CR-2032 battery and features a weatherproof, magnesium housing. An autobrightness sensor adjusts the brightness level to match the ambient lighting, and the optional, triangle-shaped, delta reticle offers a fine point of aim for a level of precision beyond the round dot. The apex of the triangle can be used for precision shots, while the entire shape is ideal for center-mass shots out to about 20 yards. A motion sensor powers up the DeltaPoint when movement is detected and switches to sleep mode after five minutes.

Bowie milled the slide to accept the mounting plate and installed the DeltaPoint behind the ejection port. He then replaced the factory sights with high-profile, suppressor back-up sights that consist of a fixed rear and blade front that are black and void of dots or inserts. Unlike some gunsmiths, Bowie prefers to mount the rear sight in front of the optic, where it does not obscure the optic’s window. This placement also serves to protect the optic during one-handed malfunction and manipulation techniques.

Pistol-Mounted
When the pistol was returned, I spent several evenings dry-firing it and finding the dot, the latter of which may be the single largest drawback to a pistol-mounted optic. When using an optic on a rifle, the reticle is easily aligned as the rifle is mounted to the shoulder. But this fixed index point is missing when using a pistol, and this is where the backup sights come into play. Bowie advised me to present the pistol to the target in the standard manner by finding the front sight and then aligning it with the rear sight. This aligns the red dot in the center of the window and eliminates having to “search” for the dot.

A pistol-mounted red-dot offers many of the same advantages of rifle-mounted optics. The shooter can index the weapon while looking through the optic and remain focused on the threat. Also, a red-dot eliminates the issues of aligning a front and rear sight and makes it easier to keep both eyes open, which enhances situational awareness. In addition, the red-dot offers a significant advantage for those of us who have aging eyes and have problems focusing on a front sight.

After some practice, I found that acquiring the dot was both natural and fast. I also practiced in a variety of lighting conditions that included bright sunlight, low ambient light, and very low light conditions. I also used a weapon mounted light in low light settings to determine if the light would wash out the reticle. After a short time, I felt comfortable enough with the DeltaPoint equipped M&P to use it for a bedside gun.

Live Fire
On the range, we found that we had to adjust to the exaggerated wobble of the DeltaPoint reticle. Initially, I found that indexing the sight from the draw was slightly slower than using traditional sights. However, after a short time, it became natural, and my times picked up. I also found that follow-up shots were easier, as were target transitions. With the DeltaPoint zeroed at 15 yards, we commenced with engaging targets from 10 to 40 yards. As previously mentioned, we had to get accustomed to the dot’s wobble, but with the proper application of trigger control, we found our shots were faster and more accurate than with traditional fixed sights.

A secondary advantage to the red-dot is during dry-firing. It is easier to observe a trigger snatch with the dot than with iron sights. This is a positive for both regular shooters and novices. Trigger control is the key to any accurate shot, and the more a shooter practices, the more productive the range trips will be.

Are there any drawbacks? First, quality optics are expensive. According to Leupold’s website the DeltaPoint retails for $565, and Trijicon’s RMR Dual-Illuminated model lists for $567. Second is the price of modifying an existing firearm. Bowie Tactical will charge $175 to mill your slide for an optic, which does not include the high-profile suppressor sights.

While the above modifications may not be viable for the casual shooter, more and more people are giving serious consideration to red-dots for personal defense. Recently, S&W introduced its M&P C.O.R.E. models, which are optics-ready right out of the box. While primarily a competition series, the C.O.R.E.s make great personal-defense pistols.

There is a rumor that several government entities have been looking at red-dot sights for their tactical teams. While I do not have any firsthand information, it certainly would not surprise me. If you are considering upgrading your personal defense pistol, give David Bowie a call. He will explain the various options and get you set up. 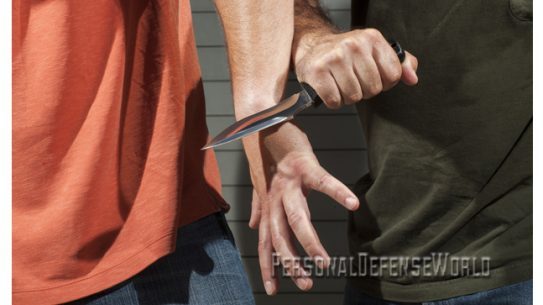 Get The Upper Hand: Fighting Blade

Go OneUp on your attacker with this improved fighting blade! 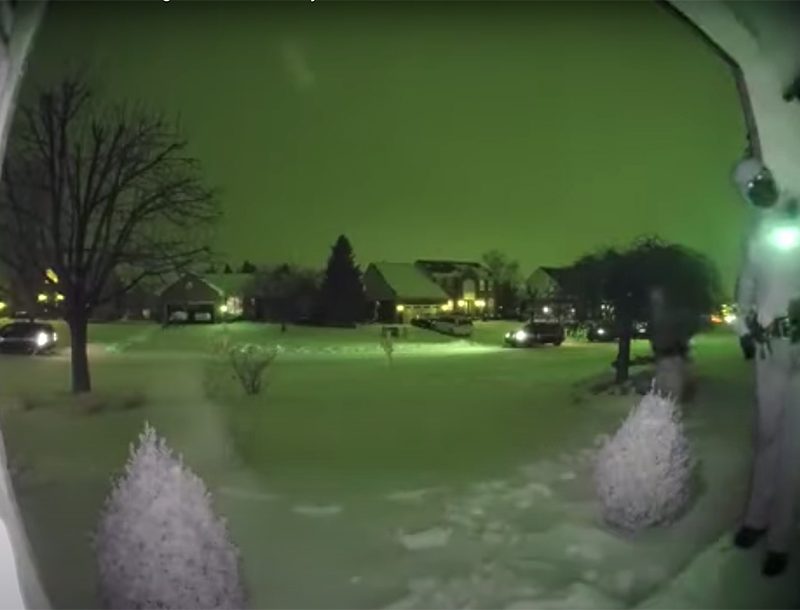