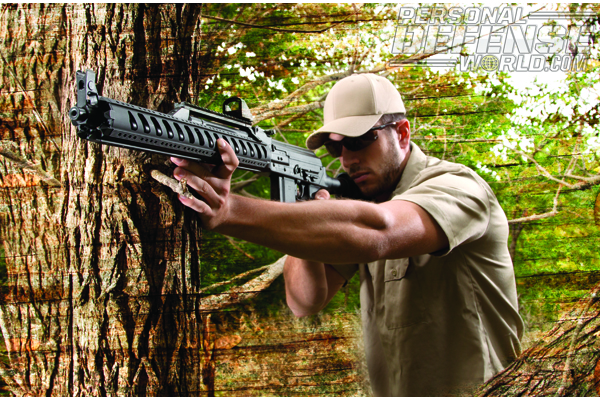 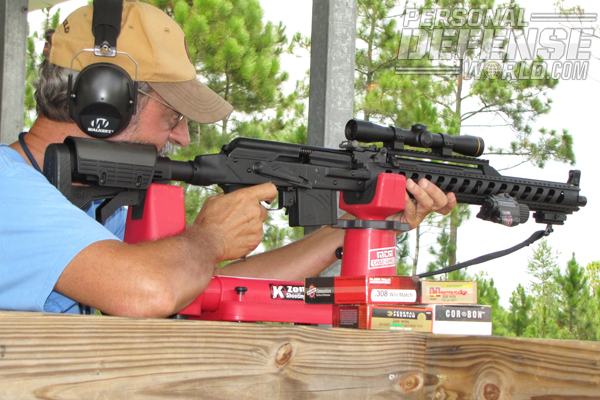 2 of 4
ATIMOLOT VEPR .308 | Gun Review 4
The VEPR was bench-tested for accuracy using an MTM K-Zone shooting rest and four factory loads. Average groups ranged from 2.53 to 3.42 inches at 100 yards. 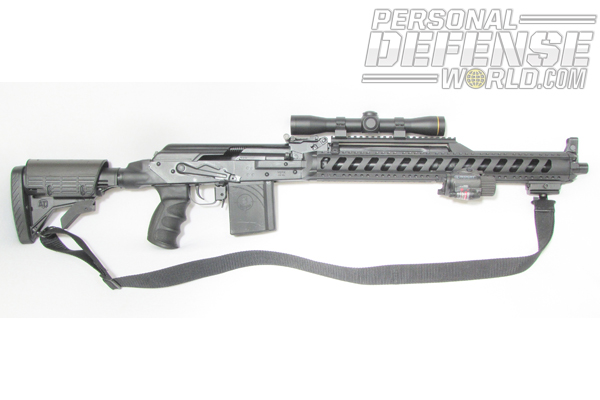 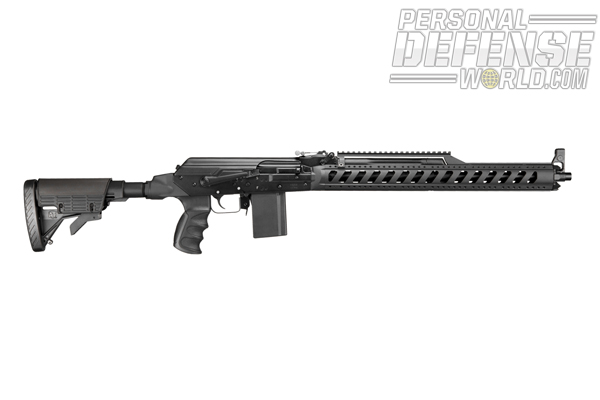 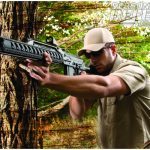 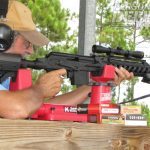 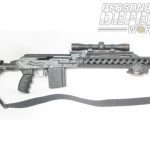 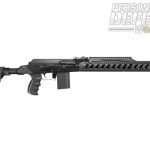 Rifles built on the Avtomat Kalashnikov (AK) pattern are highly reliable, but they often need aftermarket customization to optimize their tactical utility. Recently, Advanced Technology International (ATI) and MOLOT have cooperatively developed an aftermarket stock and forend for the AK-based VEPR. The result is a high-power, tactical rifle that can easily resolve just about any close- to mid-range tactical situation.

VEPR Build
The VEPR isn’t an ordinary AK. It’s built on the RPK light-machine-gun receiver, which is 50 percent thicker and stronger than a standard AK. To complement the larger receiver, the VEPR also has a heavier barrel that is hammer-forged at the MOLOT factory in Vyatskiye Polyany, Russia. The barrel on the ATI VEPR used for this article is 20.5 inches long. It has a chrome-lined chamber and bore. It has a 1-in-320mm twist rate, which translates to about a 1-in-12.6-inch twist, which is best suited for 147- to 168-grain bullets. The operating system and controls of the VEPR are very similar to that of the AK. The short-stroke gas piston and gas block are located above the bore. Both the piston and block are chrome-plated to resist corrosion. The fire-control lever is located on the right side of the receiver—push it up to place the rifle on safe and down to fire. The VEPR’s single-stage trigger has a smooth, 5.5-pound pull that has about a quarter-inch of take-up and an eighth-inch of overtravel. The rifle is equipped with a 10-round, Dragunov-style, polymer magazine that is inserted into the magazine well by “rocking and locking” it into position. The magazine release lever is ambidextrous and located at the front of the triggerguard. Once the magazine is locked in place, pull back on the bolt carrier’s operating handle to rack a round into the chamber. As with other AKs, there is no bolt latch to hold the rifle open after the last round is fired.

The quality control of the VEPR and its ATI aftermarket stock and forend were very good. Everything fit well, and there were no signs of tool marks or uneven edges. When the rifle was field-stripped it was clear that all of the parts were properly fitted—there were no tool marks, poorly-formed parts or other imperfections. The exterior finish was a non-glossy black. The color of the barrel and receiver was closely matched by the color of the ATI aftermarket parts. Overall, the rifle was appropriately non-reflective.

ATI Parts
ATI is based in Milwaukee, Wisconsin, where it manufactures a variety of stocks and accessories for tactical and hunting rifles. Depending upon their intended function, ATI parts are made from the latest polymers or mil-spec aluminum. ATI’s VEPR Strikeforce Elite stock has an adjustable cheekpiece and length of pull. It also comes with the Scorpion Recoil System, which is made of a special, recoil-absorbing Poly One polymer known as Scorpion Material. Scorpion Material is located in the pistol grip and buttpad. In this way, the recoil impulse is reduced at the wrist and at the shoulder. The system is very effective
in reducing recoil and allows the shooter to get back on target quickly.

The ATI/MOLOT VEPR is also equipped with ATI’s six-sided, anodized 6061-T6 aluminum forend with a nose cone and optics rail. The optics rail is sufficiently low that the VEPR’s iron sights can be used with a scope or EOTech holographic sight. The six-sided forend is skeletonized to reduce weight. Accessories are added by mounting 2-, 3- or 4-inch rail segments. This helps keep the weight of the rifle down to about 8.5 pounds empty. One interesting feature of the forend is its optional nose cone. The cone has seven sharp projections that can be used to press the rifle against vertical cover. This can be a significant aid when engaging targets at intermediate and long-range distances because the projections grip cover and steady the rifle. The nose cone extends to within an inch of the muzzle. Therefore, pressing the cone against a doorframe or other solid object keeps exposure of the rifle barrel to a minimum. That helps prevent an assailant from taking the gun away from the shooter.

The MSRP of the ATI stock, which fits all VEPRs regardless of barrel length, is $109.99. The stock and forend with optics rail and nose cone can only be used on barrels that are at least 20.5 inches long. The complete kit with stock, forend and nose cone sells for a combined price of $274.99. The price of the basic VEPR depends upon caliber and ranges from $959 to $1,999. The model tested has a suggested price of $1,200.

Optics & Accessories
The VEPR has a sturdy set of iron sights that are adjustable from 0 to 1,000 meters, but a modern tactical rifle isn’t complete without optics. The choice of optics depends upon the mission of the rifle and the rifle’s configuration. The .308 VEPR is primarily designed for close- and medium-range tactical operations. Because of this, an EOTech EXPS2 holographic sight and a Leupold long-eye-relief FX-II 2.5x scope were chosen for live-fire testing.

The EOTech’s EXPS2 holographic sight is one of EOTech’s smallest and lightest. It also has a quick-release mount that allows rapid transition to iron sights. The sight’s reticle has a 65-MOA circle with a 1-MOA dot in the center. The reticle is useable under all lighting conditions provided the rifle has a weapon light for target illumination.

The circle/dot reticle is very versatile. For close-range encounters at distances of 3 to 7 yards, where a quick shot is mandatory for survival, one simply places the circle over the center of the target’s thorax and presses the trigger. At 15 to 20 yards, the diameter of the circle matches the diameter of the chest and shoulders. One places the widest part of the circle over the shoulders, and the shot will land in the upper thorax. This is because the line of sight is about 4 inches above the line of the bore. Placing the circle over the shoulders provides an automatic 4-inch offset. Beyond 20 yards, the central dot becomes the aiming point. For precise shot placement at any range, the dot is used with the appropriate vertical offset for the distance to the target.

The 2.5x Leupold FX-II Scout scope has an eye relief of 9.3 inches, which is perfect for the ATI optics rail. The scope’s 28mm objective lens combined with its actual magnification of 2.3x gives this scope an exit pupil of slightly more than 12mm. This along with the scope’s Multicoat 4 lens system makes the FX-II Scout an excellent performer in moderately low light. The scope was mounted in Leupold low rings to minimize the distance between the line of the bore and the line of sight. The total weight of the scope and rings is about 9 ounces, which is about an ounce more than the EOTech and its mount.

Two other accessories completed the package. These were mounted using 2-inch ATI rail segments. The first was a two-point Butler Creek sling. The second was an EOTech M6X R LED light/red laser with a rail-grabber mount. The unit puts out a maximum of 150 lumens, and its laser is visible out to 200 meters in very low light. When sighted in during bright Florida days, the laser was visible out to about 20 meters. The M6X was mounted on the forearm’s lower right rail. This made it easy to manipulate the light/laser’s rocker switch with the index finger of the support hand.

Shots Downrange
Four commercial loads were selected for testing the VEPR’s performance. All of the bullets in these loads weighed between 150 and 168 grains, which is ideal for the barrel’s rate of twist. I shot Hornady’s 150-grain SST, CorBon’s 168-grain Performance Match BTHP, Federal Premium’s 168-grain Gold Medal Match BTHP and Black Hills’ 168-grain Match BTHP.

The VEPR’s optics were zeroed at the Flagler Gun Club and at the Volusia County Gun and Hunt Club using the author’s handloads topped with Sierra 168-grain BTHP bullets. Many semi-autos are finicky about functioning with handloaded ammunition, unless the ammunition has been reloaded using small base dies. Mine were not, but the VEPR digested them without a problem. In fact, it never jammed with any ammunition.

The rifle was tested for accuracy at 100 yards using a Leupold spotting scope and an MTM K-Zone shooting rest. Three five-shot groups were fired with each commercial load using the Leupold FX-II Scout Scope. To test the longer-range capabilities of the rifle, additional groups were fired at 200 yards. The CorBon load was the most accurate. Its 100-yard average was 2.53 inches, and the best single group was only 1.1 inches. The least accurate load was from Black Hills, which averaged 3.42 inches.

Federal’s Gold Medal 168-grain load grouped three shots into 3.95 inches at 200 yards. This load also put five shots into 4.66 inches on a 200-yard silhouette target. All hits were in the lower thorax and upper abdomen. Using a higher-powered scope attached by a Dragunov mount would probably have produced tighter groups. However the Dragunov is a sniper rifle, and the ATI VEPR is a close- to medium-range tactical rifle. Therefore higher-powered optics were intentionally not em-ployed. Results at 100 and 200 yards with the EOTech produced groups that were larger than those shot with the Leupold scope. Five shots at 100 yards went into 4.5 inches, and five shots at a 200-yard silhouette went into 9 inches. Four of the shots were in a 6-inch group, low in the abdomen with one in the left wrist. Velocity readings were what one would expect from a 24-inch barrel. This is excellent performance for a 20.5-inch gun. The most powerful load was the Federal Gold Medal 168-grain. It left the barrel at 2,774 fps and produced 2,870 foot-pounds of energy. This is nearly factory-level performance for a .30-06.

Two separate tactical tests were performed at the Volusia County Gun and Hunt Club. Bay 4 at the club resembles the front of a building. The structure can be cleared from either side, shooting through the window, around the corners and entering the door and clearing the hallway. The area downrange can be set up with a variety of shoot and no-shoot targets, and some were hidden behind stacked barrels. The EOTech easily cleared multiple targets in the bay. The VEPR handled very fast with its short barrel, and targets out to 15 yards were taken quickly and effectively.

Bay 7 is about 50 by 50 yards and has a 360-degree berm. It contains a large metal shoot house, and targets can be staged both inside and outside of the structure. The Leupold FX-II scope and the EOTech light/laser were used to engage three targets inside and outside the house. The laser was visible through the scope and proved to be fast, but not as fast as using the holographic sight. In fact, the fastest way to use the laser was to simply raise up off the cheekpiece and look over the scope. Either way, all shots were in the upper thorax. Given that the laser was mounted low and to the right of the bore when the scope was attached, the proper offset at close range required pointing the laser high left.

Final Notes
When this rifle ar-rived at the Florida Gun Exchange, Zane Black commented that VEPR means “wild boar” in Russian. In many ways the ATI-modified tactical VEPR is like its namesake: compact, sturdy and powerful. One can’t say it’s pretty, but it sure is fast and reliable. Everything considered, the ATI/VEPR as tested is an excellent tactical rifle for distances out to about 250 yards. 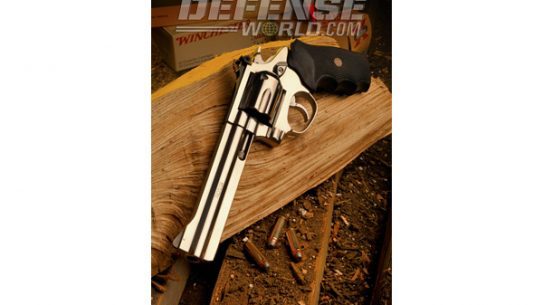