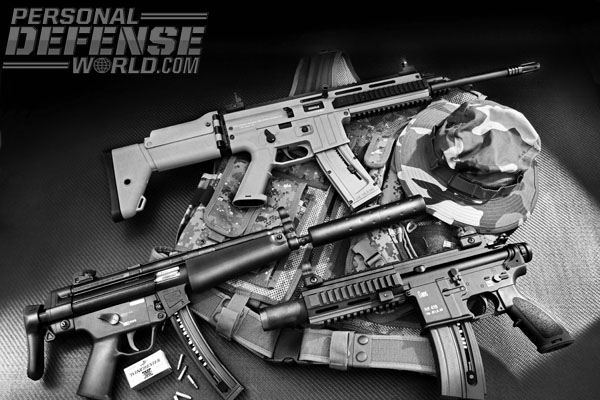 1 of 10
Favorite Tactical Rimfies Review 1
Same guns, smaller caliber is the ideal recipe for .22 tactical rifles and pistols. Most of the major models chambered in 9mm and 5.56mm are duplicated in .22 versions such as the ISSC MK22 (top) based on the FN SCAR, and two models from HK (lower) built to duplicate the original 9mm MP5 and the 5.56mm 416. The HK .22s are manufactured in Germany by Carl Walther. 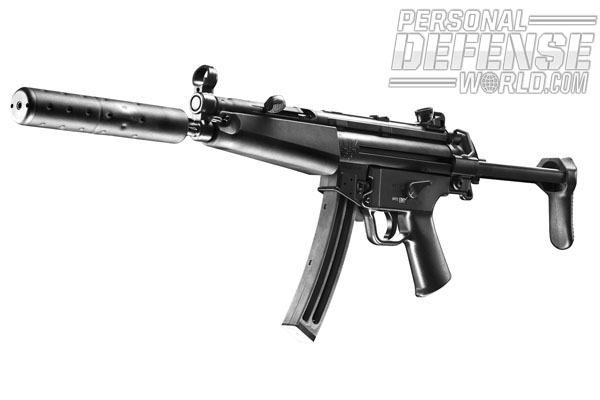 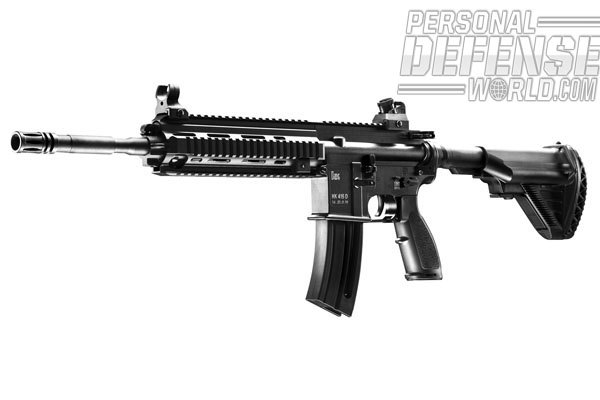 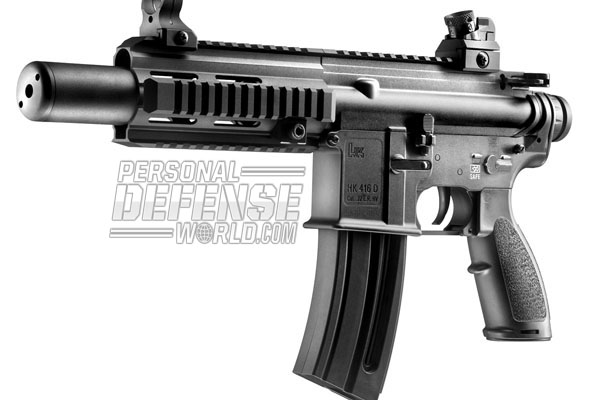 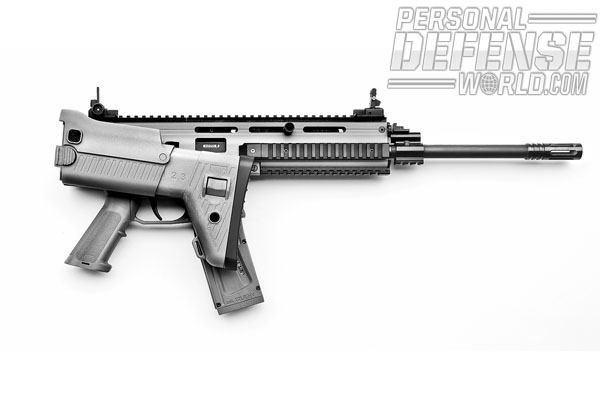 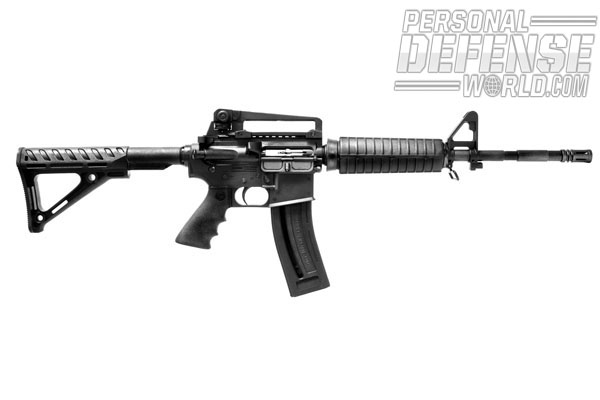 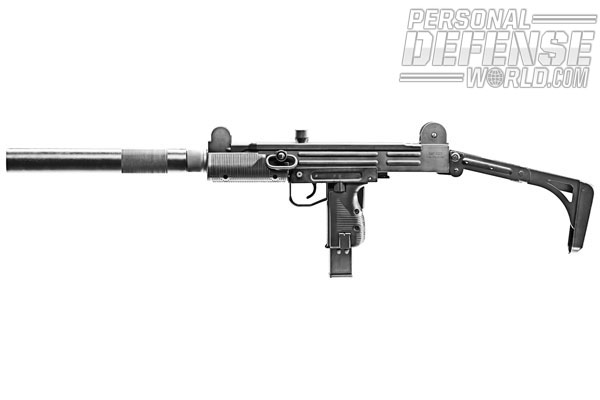 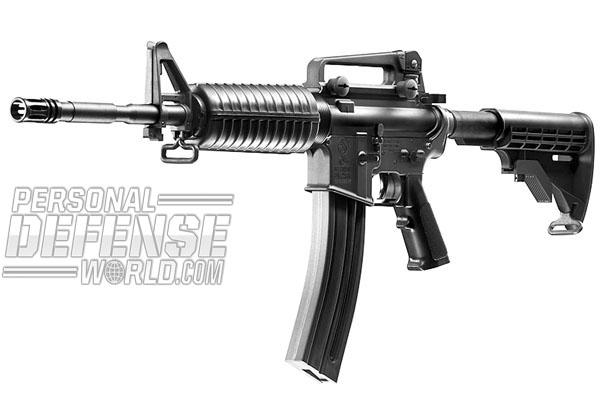 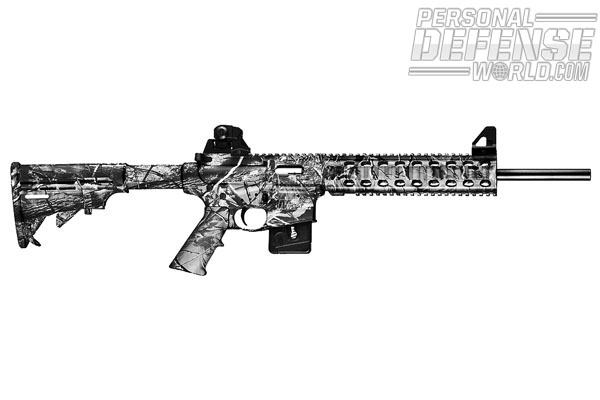 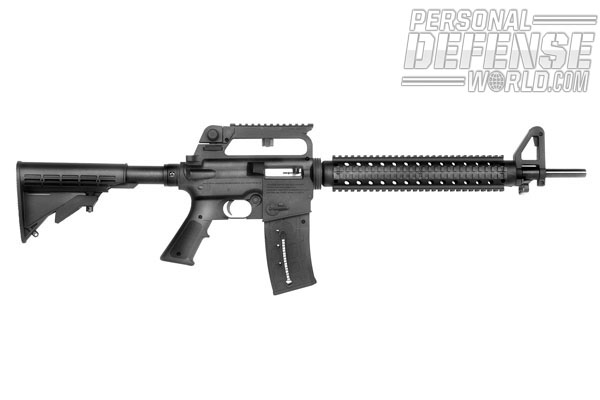 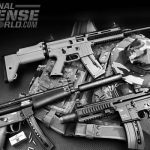 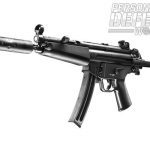 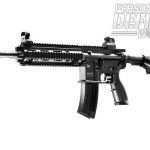 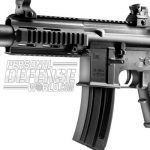 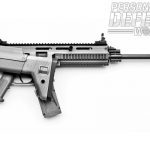 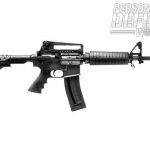 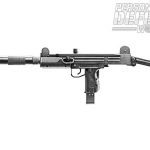 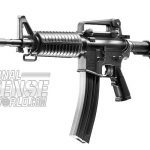 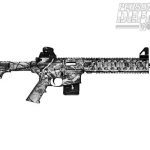 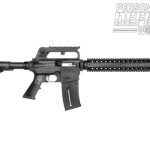 When it comes to .22 LR copies of military-style rifles and machine pistols, many models offer the “look” but not the “feel.” It is the latter that separates .22 LR plinkers from guns that have both the features and details that make for authenticity. For remedial training or precision shooting, some well-made .22 LRs are the closest thing to the 9mm and 5.56mm caliber firearms they’re based on.

Heckler & Koch
Three models from HK represent the very best of these .22 LR rifles: the famed MP5A5, the HK416D assault rifle, and the HK416D pistol based on the 10-inch-barreled HK416 and similar in appearance to the FN PDW. Both the 10-inch HK416 and the FN PDW are only available to military and law enforcement, making the .22 LR HK416D pistol very desirable.

The 5.56mm HK416 was originally developed for U.S. special operations forces as an improvement to their M4/M16-type carbines and rifles. Using the HK-proprietary gas-piston system found on the G36, the HK416 does not introduce propellant gases and carbon fouling back into its interior, making it among the most reliable of any M4/M16-type weapon. While using a blowback action, the .22 caliber versions have the same weight and balance as the 5.56mm (.223) models.

The MP5A5 is among the most authentic of all .22 caliber military-style weapons made. An almost identical copy of the 9mm military version, the MP5A5 has a collapsible metal buttstock,a rear sight that is adjustable for elevation and windage, and an interchangeable front sight. Of all the models tested, this was the most enjoyable to handle and shoot. And it turns more than a few heads with its faux suppressor shrouding the match-grade 16.1-inch barrel. The steel upper receiver is combined with a composite lower and pistol grip to make the .22 LR MP5A5 model a paragon of the HK slogan “no compromise.” For more information, visit hk22rimfire.com or call 479-646-4210.

ISSC
One of the most recognized and highly respected military rifles of the 21st century is the FN SCAR, a highly adaptable rifle that can be configured for different mission requirements. Among variations is the MK16 chambered in 5.56mm NATO. As a selective-fire military rifle, this SCAR offers a wide variety of features, including a multi-position, collapsible and folding stock and full quad-rails.

The .22 LR version manufactured in Austria by ISSC is marketed as the MSR MK22 and embodies many of the SCAR’s distinctive features. The MSR MK22 is a very adaptable .22, having the same folding and adjustable shoulder stock, full rails for optics and accessories, and a quality build with an alloy receiver. When paired with a Walther PS 55 red-dot sighting system, the MSR MK22’s field test delivered excellent results. For more information, visit issc-handels-gmbh.at.

Chiappa
While some very high-quality .22 LR models come from German and Austrian manufacturers, one of the hottest new lines is made by Italian manufacturer Armi Sport Chiappa. Chiappa offers AR-style carbines, upper receivers and an AR-style pistol based on the 5.56mm FN PDW. All of the Chiappa models have injection-molded upper and lower receivers with blowback actions and steel components crafted from C40 carbon steel. The pistol, carbine and M4-22 upper barrels have a 1-in-16-inch twist rate and come with fixed .223-size faux flash suppressors shrouding the .22 caliber muzzle. The Chiappa .22 ARs are ruggedly built and, when equipped with optics (red-dot scope), remarkably accurate. For more information, visit chiappafirearms.com.

Umarex USA
If there is one gun that almost everyone in the world recognizes on sight, it is the legendary UZI. Military classics almost as famous as the AK-47, the 9mm Israeli (IMI) UZI rifle and pistol were an absolute must when it came to building .22 LR copies. Umarex, the parent company of Carl Walther, has stepped up to the plate and hit it out of the park with two impeccably accurate models of the UZI rifle and pistol. Richard Turner, vice-president of sales and marketing for Umarex USA, explains why Umarex added the UZI to its highly successful line of Colt, HK and other .22 caliber versions of military-style weapons: “Demand for .22 caliber guns continues to be strong. The addition of a .22 caliber UZI is a ‘natural’ add for us. It’s one of the most recognized guns on the planet, yet few people have actually fired rounds through one. Shooting the UZI pistol is just pure, economical recreation with a ton of fun thrown in.” We’d be hard-pressed to argue with that. Umarex UZIs are certainly some of the best new .22 LR models in years. For more information, visit umarexarms.com or call 479-646-4210.

Colt
Through Umarex, Colt has delivered some of the best .22 AR models on the market, as well it should since it perfected the design first adopted by the U.S. military. And Colt certainly has the lock on developing the ever popular M4. As tactical .22s go, however, nothing quite matches the ultimate Colt M4 flattop: the M4 Ops Tactical Rimfire. This gun has all the bells and whistles, which are as authentically reproduced as they can be and all wearing the official Colt brand! The M4 Ops comes with a simulated suppressor, red-dot scope, laser sight and tactical flashlight, all perfectly positioned around the rifle’s Picatinny quad-rail system. As a training, varmint-hunting or home-protection gun, there is little more
in terms of looks, accuracy or function that you can ask for. For more information, visit colt22rimfire.com or call 479-646-4210.

Smith & Wesson
When S&W got into the AR business in 2006 with its 5.56mm M&P15, it was only a matter of time until a .22 version entered the line. That took place in 2009, and ever since then S&W has been adding models. Today there are 10 versions, including two Realtree Camo hunting models and two Performance Center competition models. Almost any variation of the AR-15/M4 platform can be duplicated in the S&W M&P15-22 line, including military-style configurations with Magpul sights, stocks and grips and black or flat dark earth finishes. For more information, visit smith-wesson.com or call 800-331-0852.

Mossberg
Last but not least is a .22 LR from Mossberg, a world-famous shotgun man-ufacturer that’s not particularly known for making either .22 caliber rifles or AR-15s. On the tail of its successful Model 702 Plinkster, Mossberg has added another AR-style platform for under $300. The new lightweight Tactical .22 715T combines the look and feel of today’s AR-style rifles (which Mossberg also makes in .223 Remington) with Mossberg’s proven 702 autoloader. The 715T matches an 18-inch barrel to a quad-rail forend, giving any shooter’s the opportunity to easily customize the weapon with lights, lasers or any number of AR accessories currently in the marketplace. The 715T is available in two stock configurations: a fixed stock with a standard 13-inch length of pull, or a six-position, polymer, adjust-able stock that offers a 10.75- to 14.5-inch length of pull that can accommodate adults and smaller shooters. The 715T .22 features an integrated A2-style carry handle with a rear sight and includes an optional handle-mount Picatinny rail, which allows versatility in mounting scopes and other optics while providing the clearance necessary to utilize the open sights. Other features included with the 715T are sling mounts and an optional 10- or 25-round magazine. For more information, visit mossberg.com or call 800-363-3555.

These top picks for .22 LR military-style weapons are sure to satisfy. You’ll get the look and feel you want, quality, and the advantage of low-cost ammunition. 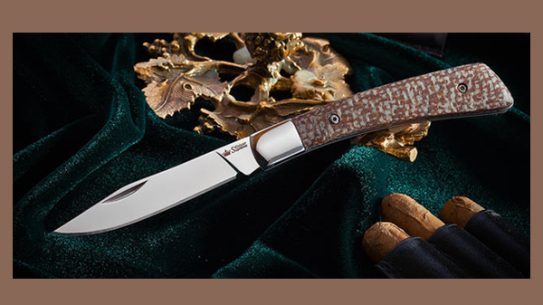 When it comes to .22 LR copies of military-style rifles and machine pistols, many…