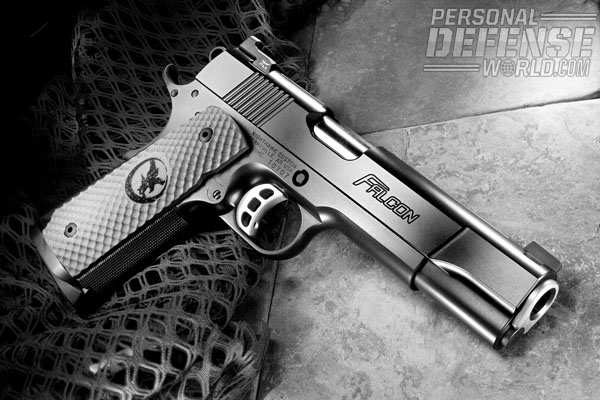 1 of 8
Nighthawk Custom Falcon .45 ACP | Gun Review 1
Combining advanced design features with an ever-increasing standard of performance, Nighthawk’s Falcon is one of the newest of their already exceptional pistols. 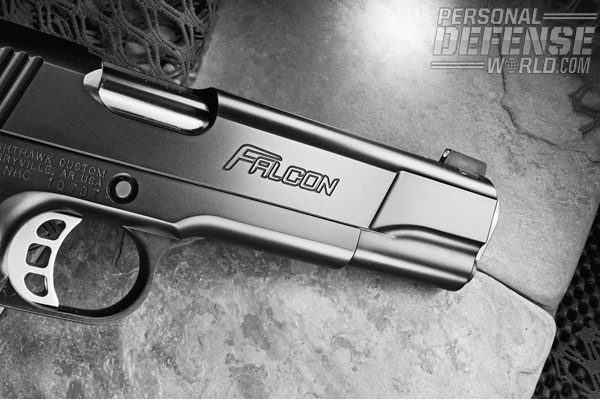 2 of 8
Nighthawk Custom Falcon .45 ACP | Gun Review 2
Combining advanced design features with an ever-increasing standard of performance, Nighthawk’s Falcon is one of the newest of their already exceptional pistols. 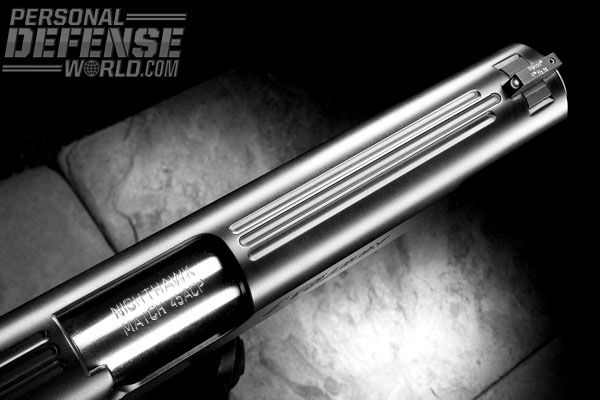 3 of 8
Nighthawk Custom Falcon .45 ACP | Gun Review 3
Three ball mill cuts are made down the top of the slide with the middle cut extending a little forward of the other two, creating a subtle angled effect. 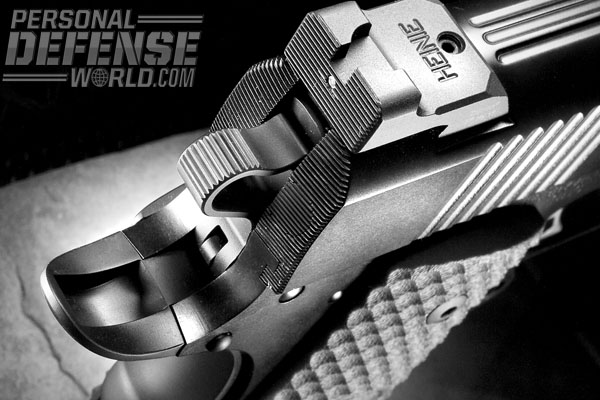 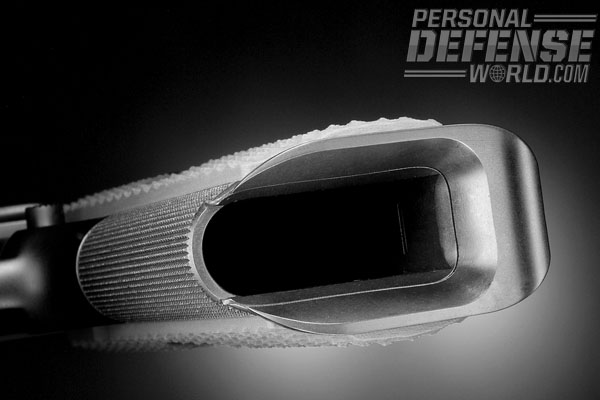 5 of 8
Nighthawk Custom Falcon .45 ACP | Gun Review 5
The bottom of the frontstrap is well-beveled to avoid cutting up your hands, and the bottom of the mag chute is fitted with a mag funnel that’s machined of a single piece of steel with the mainspring housing. 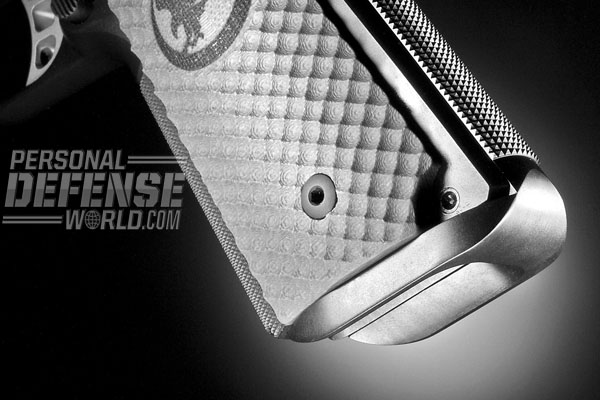 6 of 8
Nighthawk Custom Falcon .45 ACP | Gun Review 6
The bottom of the frontstrap is well-beveled to avoid cutting up your hands, and the bottom of the mag chute is fitted with a mag funnel that’s machined of a single piece of steel with the mainspring housing. 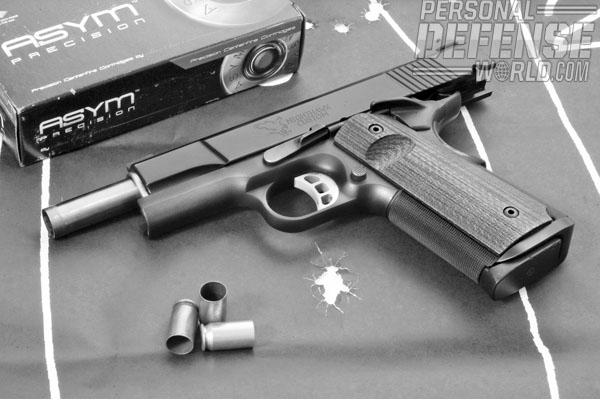 7 of 8
Nighthawk Custom Falcon .45 ACP | Gun Review 7
The author fired well over 700 rounds through the Falcon, including hardball and JHP loads in both 230- and 185-grain weights, and it fed beautifully. 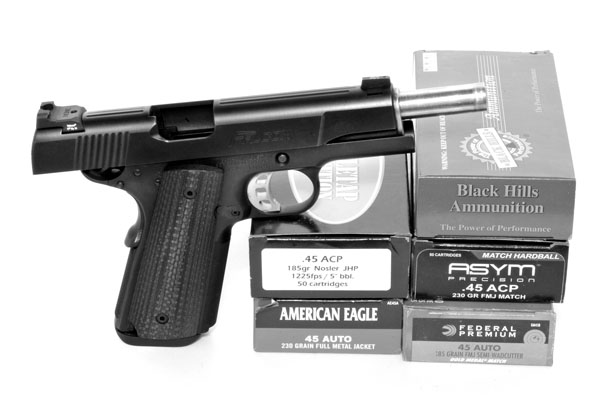 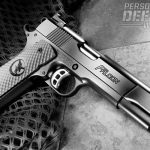 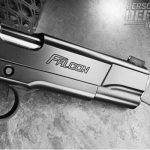 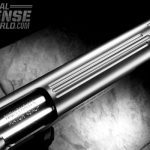 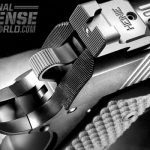 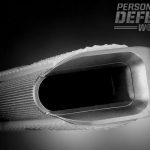 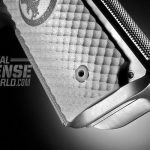 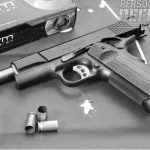 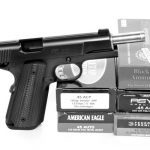 Nighthawk Custom’s reputation is well earned. By my best count, their newly released Falcon is the fifth Nighthawk gun I’ve tested. They come out of the box, go 500 rounds without a cleaning, an oiling or a malfunction, and almost monotonously do 2 inches or better at 25 yards from the Ransom Rest. They work, and they hit. But the trouble is Nighthawk is never quite content: The Falcon is yet another development in Nighthawk’s continuing quest to improve its craft.

Gun Details
The Falcon comes out of its zippered, logo-marked case and is instantly distinctive. Cloaked in Nighthawk’s black Perma Kote finish, its sleek lines are nothing if not business-like. With machine tools being more readily available to custom gunsmiths, one standout feature of the modern-day custom M1911 is its ability to take unique machining touches. The Falcon is no exception: It still comes with the usual angled cocking serrations, but if you look closely you’ll see that the bottoms of the cuts are rounded, not square. This matches the three ball mill cuts made down the top of the slide and running from just forward of the rear sight to just behind the front sight where the middle cut extends a little forward of the other two, creating a subtle angled effect. The cuts were thoughtfully stopped around the ejection port—they don’t run through it. The muzzle part of the slide also has a stepped-down cut reminiscent of the Browning Hi-Power, though instead of being square, as the Hi-Power is, the cuts are made at an angle to match the rear cocking serrations.

The Falcon has a dovetail-mounted front sight held in with a roll pin, a feature pioneered by Wayne Novak to keep the sight from shooting loose, and a Heinie ledge fixed rear sight. Designed to be used with the sight-cocking technique, a malfunction-clearing method of seriously doubtful safety, the front of the Heinie sight is squared so that it can be wedged against something and used to cycle the slide of the pistol. Both the front and the rear have a single tritium dot in the Straight Eight pattern, with the
rear dot being noticeably smaller than the front. This is not a mistake: Since it’s closer to your eye, an equal-sized dot on the rear will tend to draw your eye more quickly to that sight and away from the front, where it needs to be. (Incidentally, three-dot night sights share the same problem.) Using a single rear dot, however, and making it smaller reduces this possibility.

The rear of the slide is hand-serrated to match the serrations on the back of the sight, and, as usual, the pistolsmiths at Nighthawk did an excellent job of blending the extractor into the serrations. As you would expect, all of the sharp edges have been removed from the pistol, including the ones on the bottom of the slide, a spot commonly missed. The barrel is one of Nighthawk’s new National Match units, which is manufactured to their specifications by Kart, and as we’ll discuss later, it more than lives up to its name. It’s mated to a tightly fitted stainless bushing, which requires a wrench to remove, and uses the traditional two-piece feed ramp. Similarly, the recoil system uses the classic guide-rod-and-plug arrangement, the simplicity of which is preferable to other arrangements.

Controls consists of a crisply oper-ating, strong-side-only extended thumb safety machined from bar stock instead of being cast (as are the vast majority of safeties); a beavertail grip safety with the customary raised pad at the base; a slightly extended, serrated magazine catch; and the slide stop. The grip safety is fit with minimal side-to-side play (and no rattling).

While the contact area of the tra-ditional M1911 slide stop is curved, the Nighthawk’s has a flat shelf for the thumb to contact. The usually domed end of the slide-stop crosspin has been machined flat where it protrudes from the right side of the frame, and its hole has been countersunk. The flat pin makes it less likely that the pin will be partially pushed out while shooting, which would lock up the gun, and the countersunk relief in the frame makes it possible to still push the pin out without tools. The only drawback is that the squared end can make it a little harder to reinsert the pin while assembling the pistol.

The trigger is a lightweight aluminum one with three squared-off lightening holes and snaps the lightweight hammer forward in what feels like the high 3 to low 4-pound range. It, the barrel bushing and the barrel chamber area are the only silver parts on the gun. The rest of the Falcon is cloaked in an
even satin black. The trigger pull, even at the end of the test, maintains a slight take-up; a good, positive reset; minimal, if any, overtravel; and no discernible creep whatsoever. After trying hundreds
of M1911 triggers, you become very trigger sensitive, and it also becomes hard to say which one is the absolute best you’ve ever felt, because you can’t possibly remember them all. I can say confidently, though, that I can find no fault with this one—it’s exceptional.

The frontstrap is machine-checkered at 25 lines-per-inch (lpi), with the checkering towards the bottom of the grip being cut a little shallower than the top. The bottom of the frontstrap is well beveled to avoid cutting up your hands, and the bottom of the magazine chute is fitted with a flat-sided magazine funnel that adds roughly 0.25 inches to the grip’s length. Machined of a single piece of steel with the mainspring housing, the sides of the funnel are blended into the bevel found on the frame itself, creating a large, can’t-miss opening for fast reloads. The mainspring housing comes with 20-lpi checkering, and its base is well rounded and smooth, which is important to those of us who’ve spent many years ripping linings out of jackets with the butts of our carry guns. The gun has a total weight of about 40 ounces empty, and though the magazine well does add about 2 ounces of weight, it’s not overpowering.

Range Time
Ammunition for this test was provided by Federal, DoubleTap, Black Hills, and ASYM, the ammunition company founded by talented pistolsmith Stan Chen. Because of the well-known tendency for autopistols to “throw” the first and last rounds out of a magazine, a magazine loaded with seven rounds was inserted into the pistol, with the first and seventh round being fired over the target. I fired well over 700 rounds through the Falcon, including 230-grain hardball and JHP loads in both 185- and 230-grain weights. The pistol had a grand total of one malfunction, a case of premature slide lock while shooting left-handed. I could never duplicate it and am willing to chalk it up to my grip. Otherwise, the pistol performed flawlessly and hit as I expected. Out of the Ransom Rest, it posted a marvelous one-hole group and averaged dead at 1.75 inches at 25 yards, which is exceptional, especially for a pistol that works all the time. In more informal shooting, it produced the sort of performance you’d expect of a pistol with mechanical accuracy and a good trigger—it basically hit whatever I shot at out to 100 yards. And I had no problem hitting small targets of opportunity—spent shotshells are a particular favorite of mine—out to 25 yards.

While testing the Falcon, I also carried it a good deal. The olive-colored golf-ball-pattern grips that came on it offered excellent purchase, but I replaced them with a pair of smooth carbon fiber grips from VZ Grips, which are more comfortable to me when worn close to the skin.

Final Notes
Complacency is the enemy of excellence, and as good as Nighthawk pistols have always been, you’d think they might be tempted to slack off a little. You’d be wrong. The Falcon is both more advanced in design and a better performer than the Nighthawk pistols (as good as they were) I’ve tested in the past. The Falcon is Nighthawk’s latest but not their last, so buckle up for what’s next. For more information, call 877-268-4867 or visit nighthawkcustom.com. 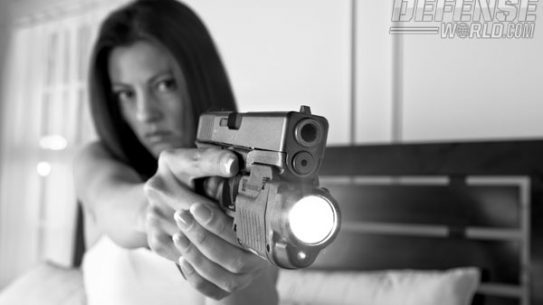 Exploring the protective benefits of the .38 Special, 9mm and .45 ACP ammunition cartridges!