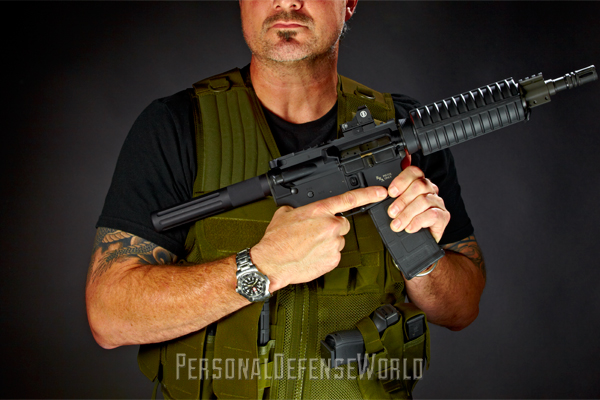 A Rock River Arms LAR-15 A5 5.56mm attracts attention when you show up at the range with such an AR-style handgun. Some people will be curious about how the gun shoots, some will want to have one, too, and others will wonder why in the heck anyone would want such a thing. Actually, that’s a good question. Why would anyone want one?

First, let’s make something clear. AR-style pistols are not a new invention that a gun maker came up with in order to sell something different. Way back in the mid-1970s, the M231 Firing
Port Weapon (FPW) was developed for use by armored person-close to the vehicle. With a short barrel and no buttstock, the pistol could be thrust through the firing port of a Bradley Fighting Vehicle (BFV) to repel attackers at close range. Because the M231 was short, it could be maneuvered more easily than a rifle in the confined spaces of the BFV, but it still followed the M16 design and fired the 5.56mm NATO round, which is much more powerful than a pistol cartridge.

The concept of a small, short gun with the magazine capacity of an AR-15 that fires the same cartridge has applications today for some who need a gun for personal protection. Besides, these pistols are fun to shoot, retaining many of the same features of the rifle from which they were derived. 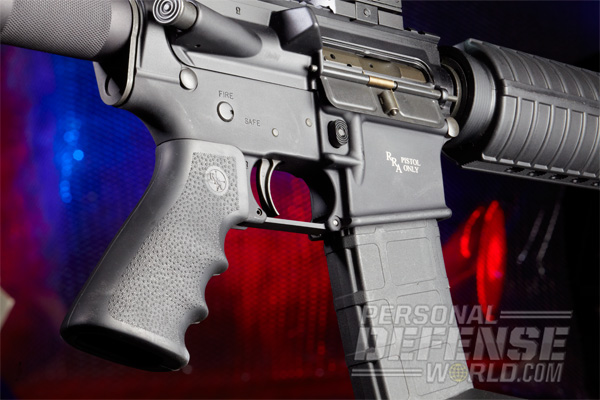 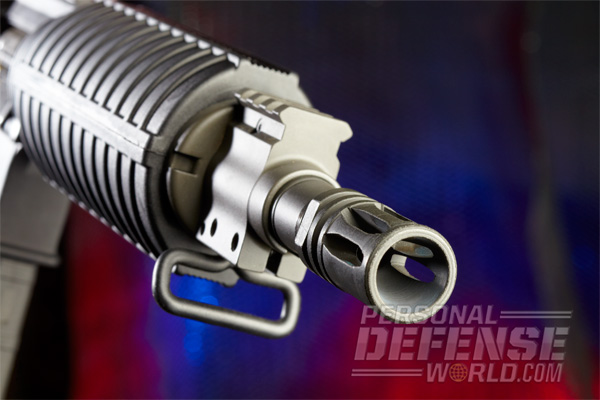 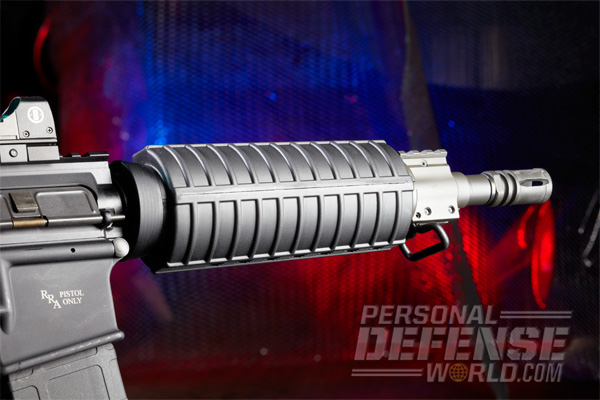 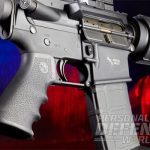 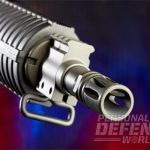 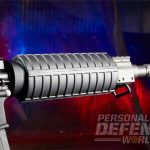 GUN DETAILS:
Rock River offers the A4 pistol with either a 10.5-inch or a 7-inch barrel using a 1-in-7-inch or a 1-in-9-inch twist, respectively. The 10.5-inch barrel can be had with a chrome lining, though not the 4The mag well is nicely beveled for fast reloads. As the author discovered, the LAR-15 A4’s accuracy was excellent at 25 yards and beyond.        7-inch barrel. The one I received for testing had the longer 10.5-inch barrel and was not chrome-lined. The first thing some shooters will think of when considering a short barrel is loss of velocity and therefore loss of range and terminal performance. But the barrel length is just fine at the ranges for which this gun was designed. This is not a long-range gun; it’s for close encoun- ters just like any other pistol. But with the high-velocity, small-caliber 5.56mm NATO or .223 Remington round, the A4 is much more powerful than the typical self-defense handgun firing a 9mm or even a .45 ACP round, and, in an emergency, can reach out farther.

At the back end of the gun there is a receiver extension—what some call the buffer tube—that extends about 7 inches. That makes this handgun pretty long, spanning a total of almost 27 inches, so it is not built for discreet carry. But again, it is small enough for deployment from a vehicle or in other confined spaces when the bad guy is within short range. Putting a buttstock on the A4 will make you a felon, so don’t do it. The gun was designed and meant to be fired as a handgun, so no buttstocks are allowed. Also, do not put a vertical foregrip on this gun. That’s another ticket to jail. Although those features would enhance its handling and performance, that’s what the law is, and that’s what you get. That doesn’t mean this gun is useless, though. More about how it handles later.

Up at the front of the barrel is an A2- style flash suppressor. Rock River offers loads of options, so, instead of an A2 flash suppressor, you can get a long or a tactical long version of an A2, a Smith Vortex flash suppressor, an RRA Military Style Brake or an RRA Tactical Brake. Behind the muzzle device is a gas block that has a Picatinny rail on top where a front sight can be mounted. Rock River offers a flip-up front sight as an option. At the bottom of the gas block is a sling swivel, but, unfortunately, there was no sling swivel anywhere else on this gun, so it was of no use. 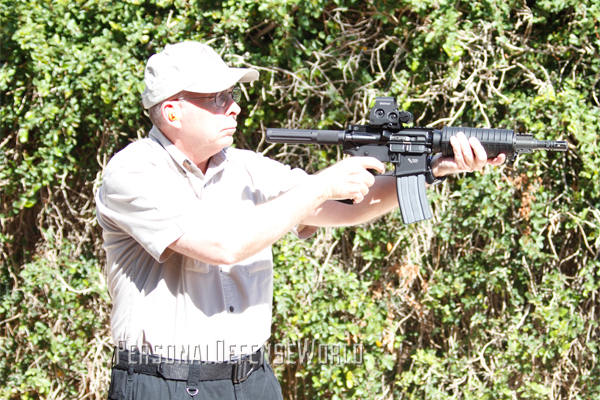 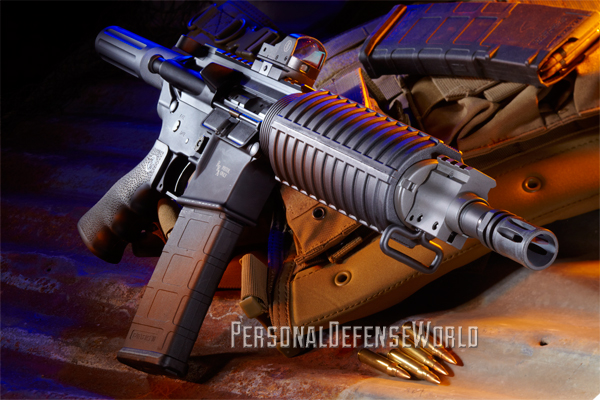 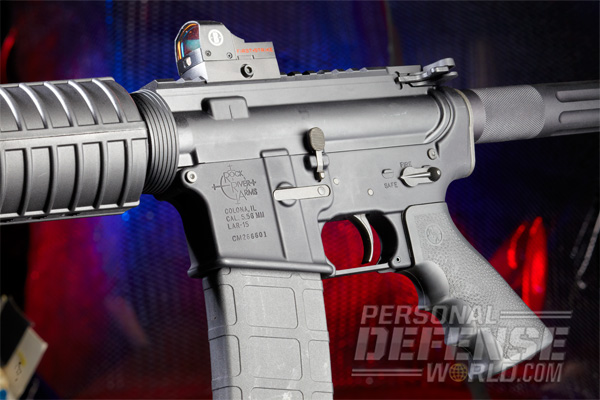 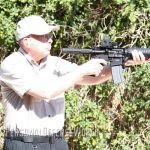 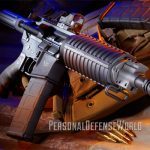 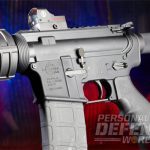 However, if a receiver end plate that provides an attachment point for a sling were installed, adding a sling would be a great idea. Fortunately, Rock River offers the option of an end plate with a loop on each side. Selecting that option would be money well spent because a sling is great for carrying the gun and can help to stabilize the LAR-15 A4 when firing. Back to the front of the gun. The hand- guard looks like a typical black, AR-15- style, two-piece polymer handguard that is held in place by a delta ring. It provides plenty of room for the off hand to hold onto the gun when firing, and it’s com- fortable to grip. Options here include the same style in green, an RRA Aluminum Free Float, a Delta Quad CAR or a Quad Rail Free Float handguard.

The upper and lower receivers are manufactured from 7075-T6 aluminum that has been hardcoat anodized in black. Both look like the ones found on an AR-15 flattop carbine. The top of the upper receiver on the test gun has a Picatinny rail that is T-marked, and has 13 slots for the attachment of optics or iron sights. It also sports a bolt forward assist, which can cause a lot of problems if used to chamber a round that doesn’t want to seat properly, so experienced operators seldom use it. You will find it on almost all ARs, though. Additionally, to enhance feeding reliability, the upper receiver has M4 feed ramp cuts. An option offered by Rock River is the A2-style upper receiver with a carry handle.

The lower receiver has its controls in the familiar AR-15 locations, and all worked positively. The supplied 30-round magazine dropped freely from the beveled magazine well when the magazine release was activated. The triggerguard is of the standard AR-style variety, but a winter triggerguard is offered as an option. The A4’s trigger was standard AR fare, with a slight amount of take-up and creep followed by a positive break at about 9 pounds. The safety on the sample gun was a Star safety lever that some will say is easier to use than a standard AR safety lever. A standard or Star ambidextrous lever is also available. There was nothing remarkable about the bolt catch, and if you are familiar with an AR, you know ex- actly what it looks like and how it works. Inside the upper receiver resides the bolt carrier group. The one on the sample gun had a manganese phosphate (or Parkerized) finish. Rock River also offers a chrome-plated bolt carrier group that has some definite advantages.

Chrome is very hard and is easier to clean than a Parkerized bolt carrier group. The Parkerized carrier on the test gun was chrome lined, as was the gas key, which was staked in place like it should be. The extractor, which is critical to proper operation (especially on a direct gas impingement AR like this one), had a black rubber spring insert to increase the grasping power of the extractor, on the rim of spent cartridges. Lastly, the charging handle on the test gun was again of the standard AR government-issue, mil-spec variety. However, Rock River also offers some good options here that include a Badger Ordnance Tactical Latch, an RRA Ambi Charging Handle, a Gas Buster with Big Latch or the excellent BCM Gunfighter with a small, medium or large latch. 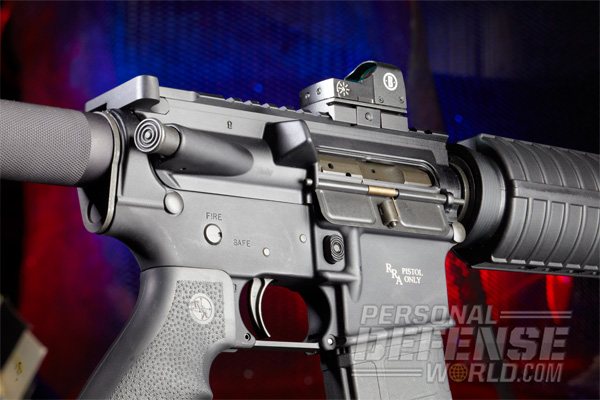 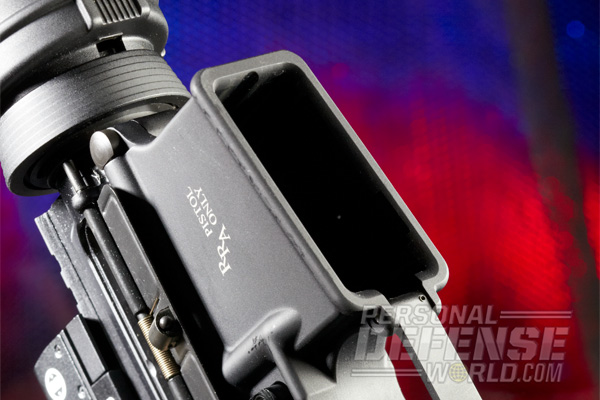 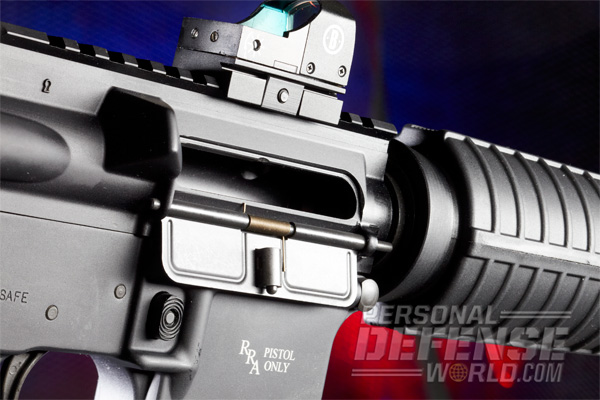 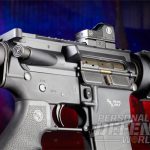 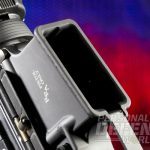 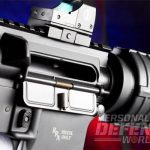 RANGE TIME:
To test the gun for both tactical usefulness and accuracy, I attached an EOTech XPS3 holographic weapon sight. This sight uses space-age technology to project a holographic image of a red dot inside a circle onto the glass lens of the optic. No matter where you put your eye in relation to the sight, if you can see the reticle, the gun is aimed at the point where the red dot is superimposed. In fact, if the lens is broken and only a part of it remains, as long as you can see the reticle, the gun will send a bullet to the place the red dot paints. The dot is only 1 minute of angle (MOA) in diameter, making it small enough for fairly precise shooting at the ranges for which the A4 pistol is suited. The circle around it is 65 MOA in diameter, and because of its size, it is very fast to put a close-range target in the middle of it and then press the trigger. For these reasons, it is a favorite optic of many who use ARs to save lives and fight the enemies of this country. So how did the gun work? During the entire test period, not a single malfunction of any kind was experienced. The gun was perfect in this respect, which is critical in a personal-defense weapon. You just cannot tolerate a gun that is not reliable when using it to save a life.

As you might expect, this is an accurate handgun. Firing the LAR-15 from the bench using a pistol rest, it was easy to get sub-MOA groups at 25 yards. That’s very difficult to do with almost any other pistol, but the 10.5-inch barrel and the EOTech sight helped a lot. Using the gun in tactical simulations was another story. The size, weight and length of the barrel made it more difficult to use than a smaller handgun. Recoil is not the problem; it’s the weight of the gun and the center of gravity. And because there is no buttstock or vertical fore-grip, holding the gun steady on target, especially when attempting to make fast shots, is a real challenge. It can be done, but it is going to take practice in order to become proficient with this big pistol. An important aid to accurate off-hand shooting with this gun would be a sling. The test gun was not equipped with a rear sling mount, although one is an option. If using a sling, it can be draped over the shoulder or around the back of the shooter and pulled tight while pressing forward with the gun. This helps to steady the aim and can improve hit probability. For the person who needs more fire- power than a typical handgun provides, the LAR-15 A4 pistol is an option. It’s not a handgun that lends itself to discreet carry, but it does have its place. 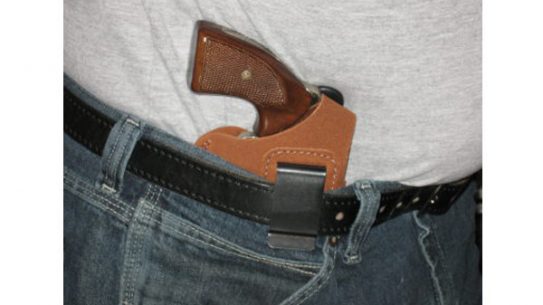 A Rock River Arms LAR-15 A5 5.56mm attracts attention when you show up at…