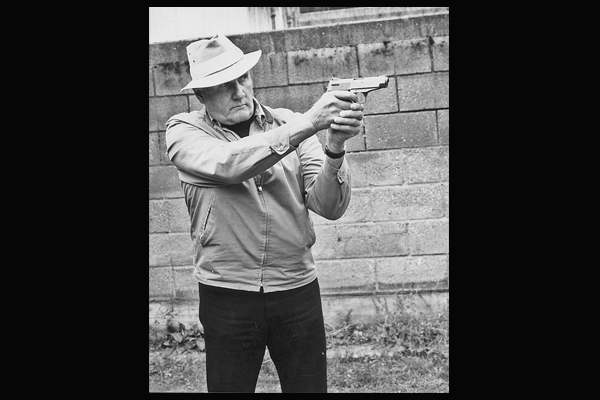 * The news people seem to think that the object of a military enterprise is to get home. They keep talking as if the only thing a soldier wants to do is to get back to base. If that is indeed true, he had best stay there in the first place. The objective of any military enterprise must be victory, at no matter what cost. When you put on that uniform you lay your life on the line—for reasons that must seem good to you. To maintain the ideals for which this country was founded, we must fare forth at least once a generation to wreak our will upon the enemies of liberty. This is the worthiest political effort, and it must be extolled rather than deplored. Men get killed in war, and often enough they die unworthy deaths lying in a hospital bed stuck full of needles. “Death comes at a crawl or comes with a pounce, but whether he’s slow or spry, it’s not the fact that you’re dead that counts, but only how did you die.” That may be an old-fashioned attitude, but that does not make it wrong.

* Bear in mind that it is more blessed to give than to receive. I know a certain amount about naval gunfire, and I am certainly impressed with the truth of that
proposition.

* It is a continuing annoyance to see people messing around with the safety rules. The four that have been developed over the years suffice entirely as now stated. There is no need for more, and we really cannot get by with fewer. However, some half-educated enthusiasts keep trying to make up a new set, or to add or subtract, which does nothing but serve to confuse matters. A major point of issue is Rule 1, “All guns are always loaded.” There are people who insist that we cannot use this because it is not precisely true. Some guns are sometimes unloaded. These folks maintain that the rule should read that one should always treat all guns as if they were loaded. The trouble here is the “as if,” which leads to the notion that the instrument at hand may actually not be loaded. This leads to disaster, yet we hear it all the time. Sometimes it appears we become so obsessed with the goal of safety that we lose sight of the purpose of the exercise. Safety is not first. Safety is second. Victory is first.

* We have noted an increasing number of so-called express sights on pistols here at school. These are the large, round dot front site and a broad, shallow v-rear. This sighting system works quite well for coarse shooting, and it does help those of us whose eyesight is not what it once was. But, we notice on the range that students using it tend to print high groups. This is not a serious objection. Group placement is not a decisive factor across the room.

* The issue of unsighted fire in defensive combat keeps cropping up. Its advocates suggest that since people are going to use it anyway, we might as well encourage it. I think this is wrong. What people are “going to do anyway” is hardly a proper reason for teaching it. It may be that most people will fire without sights when confronting lethal hostility, but that is a reason for the atrocious missing that we read about in the newspapers. Here at school we do not care about how things are done wrong. We do care about how to teach people to do things right. The modern technique gets the hits. If only a few people understand the modern technique that is regrettable, but that should not lead us astray. In the large view, it is always only a few people who do anything right. We can increase that number, and that is why we teach marksmanship.

* Political correctness foolishness is so silly that it is hard to take seriously, but there it is. It is even miscalled, for it is neither political nor correct. It is social censorship. Mr. Jefferson is quoted around the inside of his monument at Washington as standing foursquare and forever against every form of tyranny over the mind of man. As he declaimed, and as I hope we all agree, the State may justifiably control our actions—but never our thoughts. 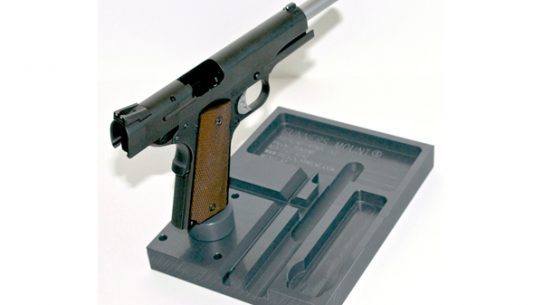 The Present Arms' 1911 Armorer's Plate is designed to accommodate the various pieces of...