20 year old Nathan L. Simmerson was accused of invading a home with four other suspects, and was arrested after he was left trapped in a bathroom, and the residents held him until the police arrived. Simmerson was formally charged with burglary for what police said was his role in the home invasion in northeast Fort Wayne. Simmerson and four others, at least two of whom were armed, donned masks and forced their way into the home when a resident answered the door, according to a probable cause affidavit.

Once in the house, Simmerson went upstairs and encountered an armed resident, prompting Simmerson who was armed with a crowbar, to barricade himself in a nearby bathroom, the report said. As Simmerson was in the bathroom, the four other intruders searched the first floor of the house and forced three of the home’s residents to get on the floor. One of the victims yelled to the resident still upstairs to get an assault rifle, at which point all four of the would-be burglars ran out the front door, according to the affidavit.

Eventually, Simmerson burst from the bathroom and dropped his crowbar as he tried to run downstairs and out of the house, the residents told police. They said Simmerson ran farther into the house as he tried to escape, but all four residents tackled and held him until police officers arrived. 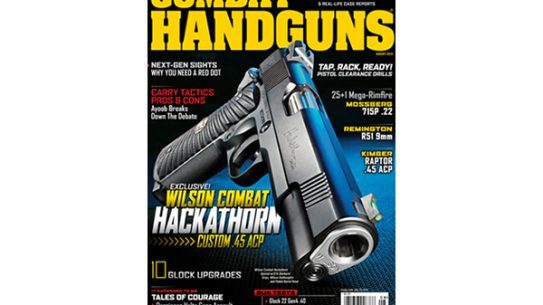 Win a Subscription to Combat Handguns!

Combat Handguns giveaway promotion to run from May 23 to June 23, giving readers...