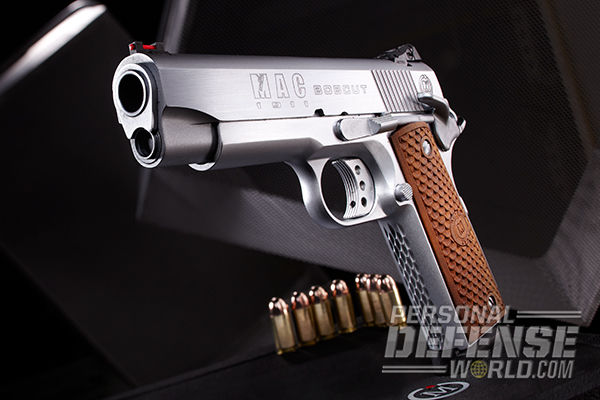 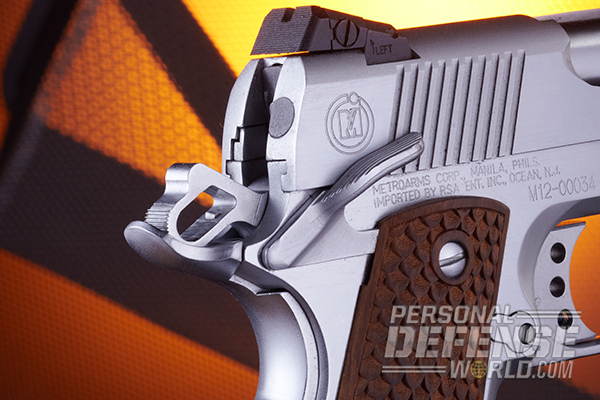 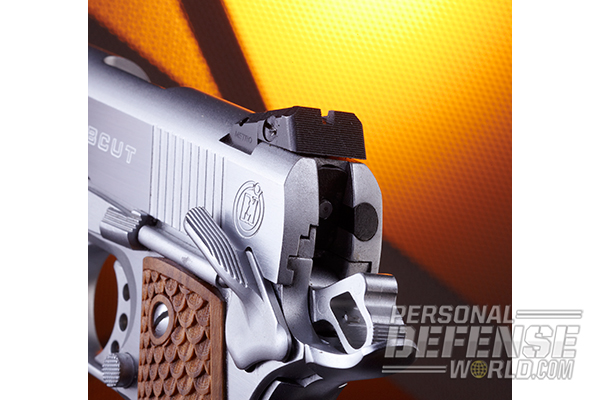 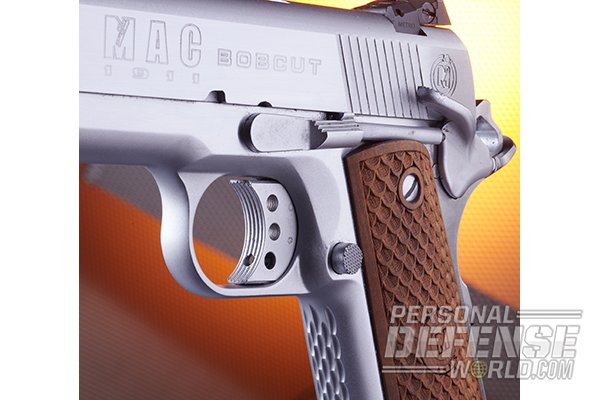 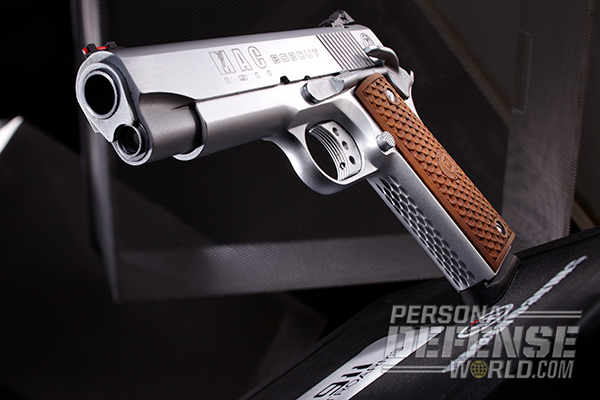 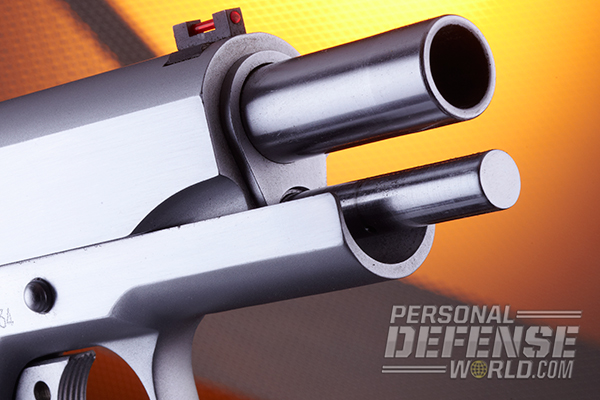 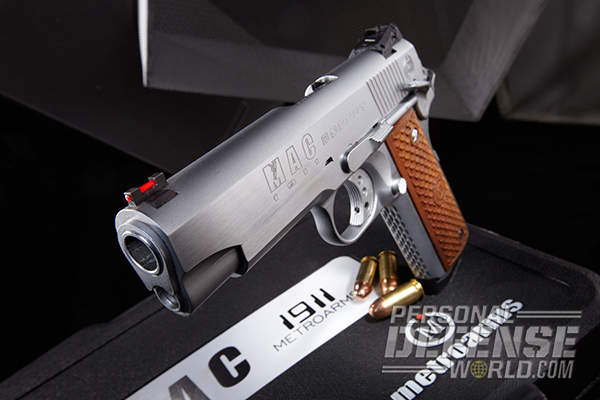 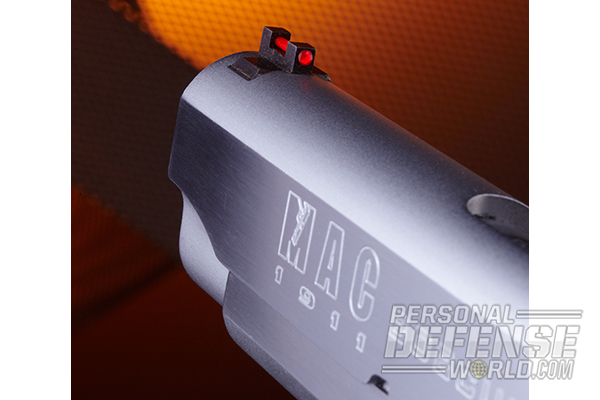 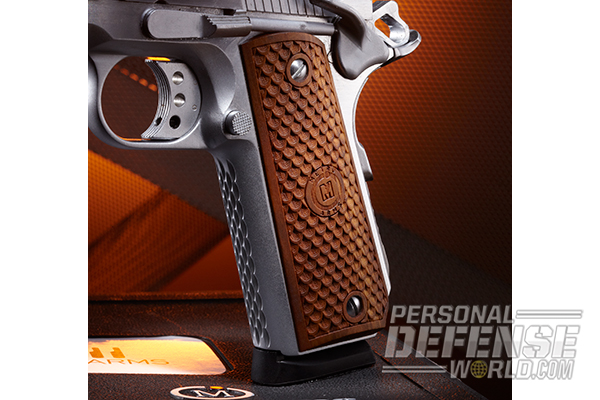 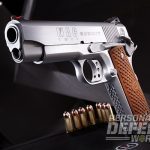 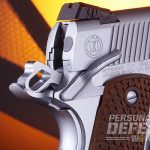 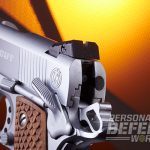 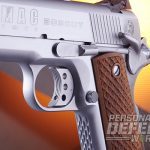 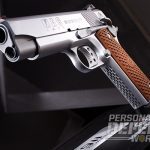 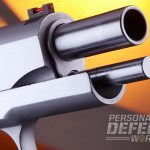 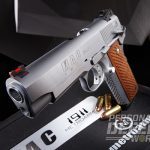 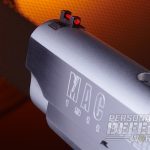 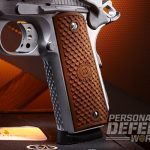 I continue to be amazed by the popularity of the 1911 pistol. Even with 100-plus years of service, it just keeps on keeping on, with new models being introduced on a continuous basis. One of the latest is from Eagle Imports (the same folks that bring you the Bersa handgun line), the MAC 1911 Bobcut. Like a number of other reasonably priced 1911s on today’s market, the Bobcut hails from Metro Arms Corporation (MAC) in the Philippines. A former competitive shooter named Hector Rodriguez developed the MAC 1911 line, and these products are well known worldwide for their quality, performance and accuracy.

For more information on the 1911 Bobcut and other products from MAC, please visit MetroArms.net.

The Bobcut is a Commander-sized 1911 with a 4.25-inch barrel. It gets its name from the diagonal cut on the backstrap at the bottom of the grip frame. This cut gives the pistol a round-butt profile that aids in concealability. Both the frame and hammer-forged slide are made from 4140 steel, which contributes to its empty weight of 34.58 ounces. Two finish options are available, deep blue or hard chrome, and both are polished on the “flats” and have a sandblasted matte finish on the top of the slide and other areas of the bottom and sides. Custom hardwood grips featuring a fish-scale pattern, and the MAC emblem come standard. The Bobcut is chambered for the .45 ACP cartridge and has an 8+1 capacity with the factory-supplied magazine.

This pistol is just chock full of standard features that in times past would only be found on a customized 1911. On top of the slide, a Novak-type rear sight is mounted in a dovetail. On my hard-chrome sample pistol, the rear sight is blue, and the backside facing the shooter is finely serrated to reduce glare. It’s fully adjustable for windage and elevation. The red fiber-optic front sight is also attached via a dovetail cut in the slide.

“I liked the heft of the pistol, and the Bobcut felt better in my medium-sized mitt than the grip configuration of any other 1911 pistol I’ve fired.”

The ejection port is lowered and flared to reduce brass deformation, and there are 10 well-defined serrations on the rear of the slide. If you retract the slide and look inside, you’ll note the barrel is throated, and the surrounding area is expertly polished for reliable operation. Both sides of the slide have the MAC emblem near the rear, while the left side of the slide is laser-cut with the MAC 1911 and Bobcut logo. The extractor and firing-pin retention plate are blued and give a nice contrast to the chrome-matte finish. The hammer is a sketelonized, Commander-style version, and the Bobcut is equipped with a full-length guide rod for the recoil spring.

Moving down to the frame, at the rear is an extended, ambidextrous manual safety, and the grip safety is an enhanced with an extended beavertail. The slide release is strictly GI, but it looks to me like the magazine release button is slightly elongated, as it has a higher profile than the one on my stock 1911A1. The combat trigger is long and has three holes for weight reduction; it is also adjustable for overtravel. The trigger on my test piece had a tiny amount of take-up before breaking cleanly at 4 pounds. Thank goodness there was no squared triggerguard or Picatinny rail to spoil the looks of this handsome handgun. Another nice and practical touch was the stippling on the front and backstraps of the grip frame—what I’d describe as an overlapping dish pattern that allowed me to effectively keep a good hold on the MAC 1911 Bobcut during rapid-fire shooting exercises. The stippling stops just above the “Bob cut” on the mainspring housing, so as not to abrade the palm.

My test Bobcut came in a plastic gun case that has inlets on the inside for the pistol and spare magazines, as well as a compartment for the owner’s manual. One 8-round magazine with a blued finish comes standard. The magazine has witness holes on both sides and a thick polymer baseplate to assist in proper seating during a fast combat reload. A close examination of the exterior of the MAC 1911 Bobcut revealed excellent attention to both the finish and the wood-to-metal fit on the grips. My test gun had about a pint of oil in and on it, so it had to be thoroughly cleaned out; you might have to do the same if you get something other than the display model from your dealer. It disassembles like any 1911 with a guide rod, so see your owner’s manual for further details on that.

As this was to be a practical test of the MAC 1911 Bobcut, I needed some leather, and at this point I recalled being sent a 1911 holster by Thomas Tedder, president of Old Faithful Holsters. This is a small, family-owned business that caters to those wanting a holster that combines comfort and maximum concealment. To this end, Tedder has amalgamated quality, American-made leather with Kydex to make a rig that looks a little bulky, but which keeps the sharp edges of the pistol away from your body and provides good handgun retention. The outsized leather apron of the High Rider OWB holster can be had with clips or slots for belt attachment. This apron comes up all the way to just above the top of the slide and extends out to form to the hip of the wearer. The more you wear it, the better it gets. Attached to the apron using hex-head screws is the Kydex body, which is molded for the particular pistol. My holster came with several lengths of screws to adjust the tension on the handgun. The holster has a straight up and down cant (or lack thereof) that is easily adjusted on the clip version, and I suspect if you wanted to make some holes in the apron you could change the cant on the belt-slot model, too. I found that the High Rider held the handgun very close to the body and did not allow the pistol to print under a light jacket or loose fitting, un-tucked Hawaiian shirt. To carry an extra magazine—which one should always do—I utilized an open pouch with a paddle back for quick on/off applications from Fobus Holsters. The model 3901-45 is made for 1911 single-stack magazines and is lightweight and low profile. Made of injection-molded, high-density plastic, it not only holds the magazine securely, but also will not come off the belt when quickly withdrawing said magazine.

Next came a visit to my ammo locker for some .45 ACP test loads. As this is a compact .45, I wanted to do most of my shooting with some favorite 230-grain loads. Starting off would be Black Hills’ new factory cartridges loaded with XTP jacketed-hollow-point (JHP) bullets. Next up was the CorBon +P load that had gaping “flying ashtray”-type JHP bullets. For something a bit lighter in weight, I selected some Federal Personal Defense cartridges that have a classic 185-grain JHP. These would be chronographed for velocity measurements and then fired from the bench at a distance of 25 yards to evaluate the practical accuracy potential of the MAC 1911 Bobcut.

“This pistol is just chock full of standard features that in times past would only be found on a customized 1911.”

One of my favorite Dirty Harry quotes is, “A man has to know his limitations,” and as I approach my sixth decade on this planet, I know I’m not the shot I used to be. So at 25 yards, I use a bigger target. Fortunately, I just got some large Shoot-N-C targets from Birchwood Casey that would fit the bill. These were placed out at the 25-yard line, and I took a position on the bench, using a sandbag rest to evaluate the practical accuracy potential of the MAC 1911 Bobcut. My point of aim (POA) was the small blaze-orange oval in the target center. After a few rounds, I remembered what I hadn’t done and that was to clean all the excess lubricant out of the firing pin channel, as I was getting some light primer hits. As the shooting continued, this problem worked itself out. Shooting three 5-shot groups with my three .45 ACP test loads, my best group measured 3.14 inches using the Black Hills 230-grain JHP load. Group averages ran from about 3.5 inches to almost 3.9 inches.

To test reliability and practical performance during rapid-fire shooting and loading, I set up a B-27-type target at 15 yards, loaded my magazines with a mix of the test cartridges and moved to the 3-yard line to run the MAC 1911 Bobcut through a combat qualification course. Drawing from the Old Faithfull holster and using a point-shoulder stance at a couple of arm’s lengths away, I fired six shots with the strong-side hand only, then six with the support-side hand, sans sights, with a combat reload in between the two strings. Moving to 7 yards, I drew and fired a series of three double-taps, reloaded, then fired a body armor drill with two shots center-mass and one to the head. After doing that twice, I reloaded and moved to the 15-yard barricade. I fired two shots from cover on the left side while standing, two from the right side while standing and then two kneeling from the right side. Out of a possible 300 points, I managed a 297. Most of the shots were well-centered in the 10-ring scoring area, and I lost two points on one of my headshots that went a bit high. Not bad considering I don’t do a lot of shooting with single-action (SA) autoloaders, and I even remembered to flip off the safety just before firing.

I was very impressed with the handling characteristics of the MAC 1911 Bobcut. The hand-grabbing stippling and fish-scale pattern on the grips helped me maintain control during rapid-fire shooting. The red fiber-optic front sight was easy to see for a close-range “flash” sight picture, and the rear sight was well defined for more deliberate shooting as distances increased. Other than the light primer hits early on caused by over-lubrication, I had no malfunctions attributable to the pistol or ammunition. I liked the heft of the pistol, and the Bobcut felt better in my medium-sized mitt than the grip configuration of any other 1911 pistol I’ve fired. Both the Old Faithful holster and the Fobus magazine pouch worked famously, and this pistol and holster/mag-pouch combo have my full recommendation for your consideration. For more on Metro Arms, visit metroarms.com or call 732-493-0302. For more on Old Faithful Holsters, visit oldfaithfulholsters.com or call 479-226-3082.

Bullet weight measured in grains, velocity in feet per second (fps) by chronograph, and accuracy in inches for best five-shot groups at 25 yards. 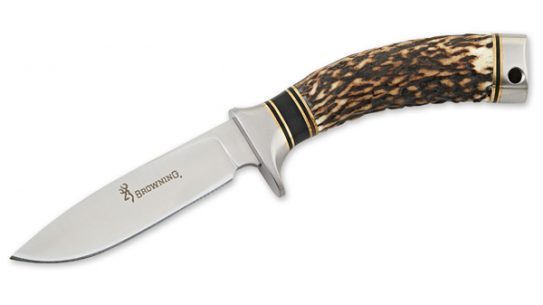