Members of AST SERT qualify with their new GLOCK 22 Gen4 pistols as part of the annual two-week “SERT Summer School” in the Mat-Su Valley.

Few realize the immense size and geographical and environmental diversity of Alaska. It’s bigger than the next three largest states combined, and its coastline is longer than the coastline hugging the entirety of the lower 48 states. Vast in size, the state experiences an extreme variety of temperatures—from arctic lows of -50 degrees Fahrenheit to summertime highs of 90 degrees. During the long wintertime, darkness, snow, blinding wind and sleet are constants. During the brief summer respite, the sun never sets. Living in Alaska is a daily challenge for the state’s 731,449-person-strong population, most of whom are transient (about 70 percent of the residents of Anchorage, Alaska’s largest city, are from somewhere else). And thanks to the state’s size, dispersed population and harsh climate, policing is a major challenge, too. Certainly, the extreme weather and geography put heavy demands on the equipment used by Alaska’s foremost law enforcement agents, the state troopers. Whether deep in the Alaskan snow tracking poachers or sailing on small craft in the rough, cold waters off of the Bering Sea, Alaska’s finest carry GLOCK autopistols. Alaska is a tough place that requires tough people and tough weapons—and no sidearm is tougher than the GLOCK 22 Gen4 pistol.

“The out-of-the-box accuracy of the G22 Gen4 is phenomenal—it is definitely impressive. What really helps is the new dual recoil spring, which facilitates quick follow-up shots.”

THE AST:
The Alaska State Troopers (AST), founded officially in 1941, is the primary statewide organization charged with keeping the peace. In reality, the AST is the only police force in Alaska capable of enforcing on land, air and sea not only criminal law, but also the state’s traffic, hunting and fishing regulations. Though largely rural, Alaska faces criminal problems not unlike those experienced by major cities, including drug manufacture and sales, sexual assault and even bootlegging, as many areas are “dry,” prohibiting the importation and sale of alcoholic beverages. That Alaska is a uniquely difficult area in which to live can be seen in the state’s persistent mental health, substance abuse and alcohol-fueled domestic violence issues, all of which occupy the troopers’ time. I had the opportunity to ride along with the AST during training, practice and routine operations around the cities of Anchorage, Palmer and Wasilla, and up and down the river valleys of the Matanuska, Knik and Susitna, observing the agents as they worked to protect both Alaskans and the many visitors who come to the great white north to hunt, fish or simply take in the extraordinary splendor of America’s 49th state.

One of the many excellent troopers with whom I worked was Captain Randy Hahn. Captain Hahn, a 22-year veteran of the AST, is currently the team leader of the South-Central Alaska Special Emergency Response Team (SERT) and overall commander of the 52 SERT operators based out of Anchorage, Fairbanks and Soldotna. The multi-jurisdictional SERT is staffed by operators from almost every department of the AST, as well as from local and state agencies like the Wasilla PD and the U.S. Fish and Wildlife Service.

WHY GLOCK GEN4?
When asked about the reasons for and the results of the adoption of the new GLOCK 22 Gen4 by his department and the SERT team, Captain Hahn said, “We had been using GLOCKs as the AST duty pistol starting with the third generation and have had great success with that pistol. When GLOCK came out with the G22 Gen4, we did an evaluation and basically decided there was nothing we didn’t like about it; the Gen4 was just like the one we already used but better! “Since we had an opportunity to transition to the G22 Gen4, it was a no-brainer decision. We have since been very happy with them. The guns themselves have a slightly different feel to them. Some of the operators say that the trigger pull is little bit more crisp, and the SERT is pretty happy with them.” As for himself, “I personally like it for a couple of reasons,” Hahn said. “Other firearms are not as intuitive to operate. 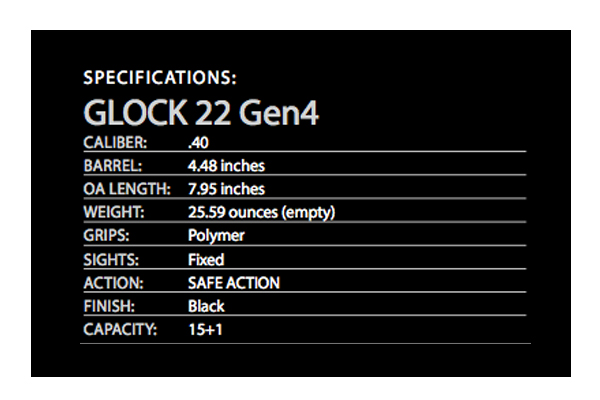 In addition, the GLOCK is simply a consistently well-functioning and very accurate firearm. It is easy to shoot, and we rarely have any malfunctions. The reliability that I have found with the one that I carry is phenomenal.” Sergeant L. Shane Nicholson, a post supervisor for the Glenallen post as well as a GLOCK armorer and a trained sniper for the AST SERT, likes the GLOCK Gen4’s adaptability. With the Gen4’s easily replaceable and differently sized backstraps, it can be made to fit a variety of hand sizes. According to Sgt. Nicholson, “One of the issues we have had for a long time is fitting a pistol to different body types (including left-handed shooters who are accommodated by a reversible magazine catch). We have smaller-handed folks, both men and women, so we had a problem getting a good grip to fit the wide range of people we employ. With this new backstrap system and the options it offers, I think this will eliminate 99 percent of our issues. I think that this is a big improvement.” Shane also noted that, operationally, the GLOCKs are excellent: “The out-of-the-box accuracy of the G22 Gen4 is phenomenal—it is definitely impressive. What really helps is the new dual recoil spring, which facilitates quick follow-up shots.”

David Loring, a patrolman out of Soldotna, said of his new G22 Gen4, “I like it a lot! It feels a lot smoother and fits my hand better. It just seems to have less recoil than my earlier generation GLOCK, and for me it was easier to lock on target and not search for my front sight because it seems like my front sight is always right there where I need it.” Patrol Sergeant Michael Roberts from Fairbanks really likes the optional backstraps on the GLOCK Gen4 pistols: “I have long fingers, so I really appreciate the larger backstrap and extension because before, in order to get a firing grip, there was a space between my third knuckle and hand, but the Gen4 fills my hands much better, and because of the longer tang and solid grip, I feel that I am controlling the gun and that it’s not controlling me!”

A PISTOL FOR ALL SEASONS:
The Alaska State Troopers live and work in conditions requiring maximum performance from a sidearm—one that will custom fit every trooper, work in subzero weather and in the face of freezing saltwater spray, and, most importantly, deliver accurate, lethal force every time and in any place. When called on to protect their fellow Alaskans, the state’s ultra-tough troopers reach for a handgun as tough as them, a pistol for all seasons, the GLOCK 22 Gen4, the best law enforcement sidearm in the world.

For more information on the GLOCK 22 Gen4, visit: http://www.us.glock.com/