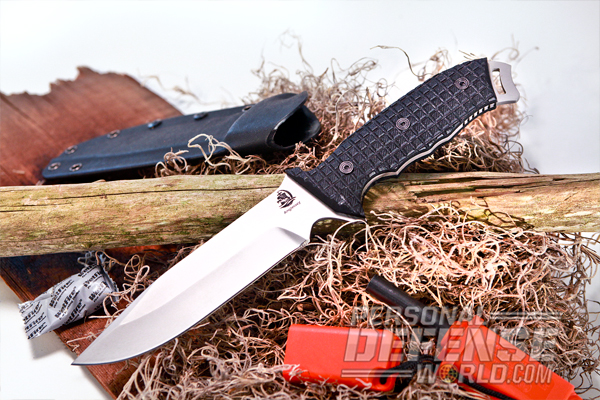 1 of 4
anglesey-main-pic
Anglesey has combined the classic lines of the battle-proven clip point blade profile, with modern handle materials and advanced ergonomics, to create the Rival combat/survival knife. 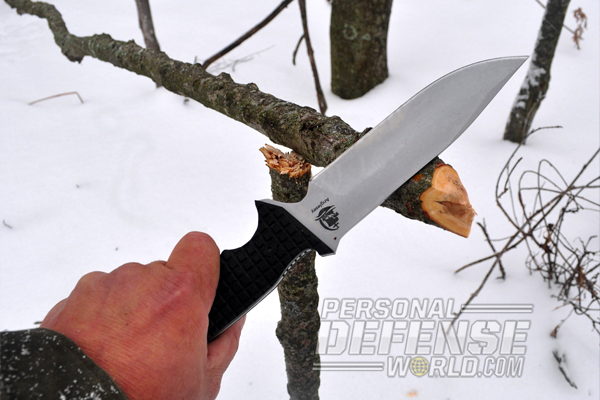 2 of 4
anglesey-chop-wood
At 9 ounces, this knife is light and quick in hand, but the forward weight distribution and handle shape serve to help offset the reduction in mass. A rearward grip allows the Rival to chop like a larger knife, and 1.5-inch saplings were felled quickly. 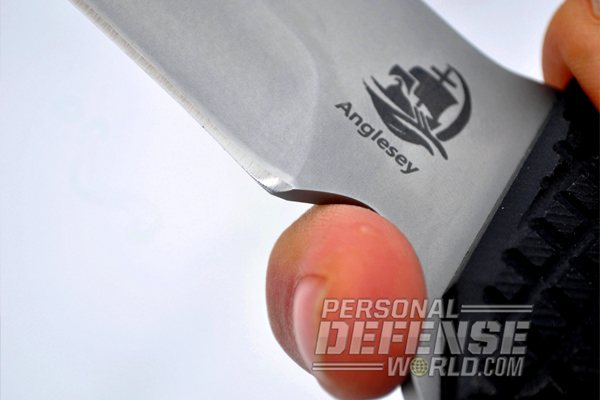 3 of 4
anglesey-finger-choil
The point of the edge on the forward side of the Rival’s finger choil has been left dull. This is great in that it will help prevent injuring an index finger when choking up on the blade for more detailed use. 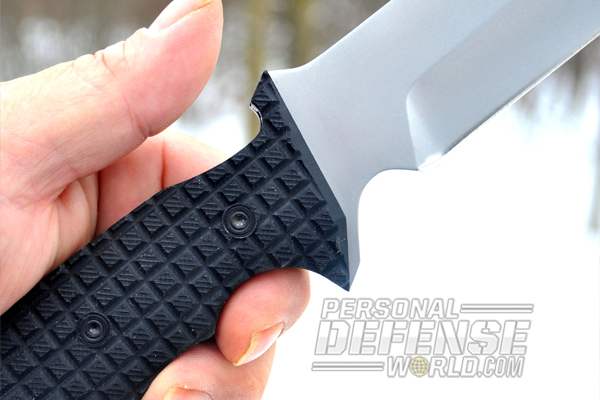 4 of 4
anglesey-textured-handle
The Rival has a heavily textured handle to ensure a very secure purchase even under very adverse conditions. It also has a very distinctive asymmetrical shape, which makes for immediate indexing of the edge. 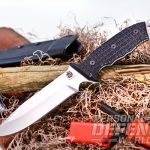 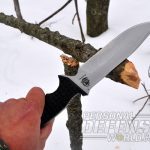 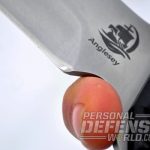 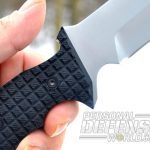 That necessity is the mother of invention is an old saying long proven true. Like several knife makers I know, Anglesey LLC founder Russell Owens began his company after not being able to find the tool he needed. In 2006, Russell’s son, a member of a special operations combat team, needed a knife for ongoing operational use. He needed one that was not environmentally sensitive, light enough for his already heavy combat load, but still a full-sized knife and still a tough knife. So he and his father founded Anglesey LLC with the sole purpose of creating lightweight but durable tactical knives and other gear. The prototypes were made and sent into the field with special operations personnel, and through the subsequent feedback gained from combat teams the Anglesey Rival was created.

The blade of the Rival, having a cutting edge four times as long as the webbing’s width and being extremely sharp, sliced easily through in one cut.

RIVAL DETAILS:
Out of the box, the Rival is obviously designed with combat in mind. The knife comes in an ambidextrous kydex sheath, on the back of which is a Blade-Tech Generation 3 MOLLE Lok affixed to a skeletonized mounting plate. The mounting plate can be relocated from one side of the sheath to the other, and it can be turned 90 or 180 degrees for various carry positions. The sheath retains the knife via depressions just behind the lower guard, which leaves more than an ample amount of handle protruding for drawing the knife quickly. The heavily checkered black G10 scales are reminiscent of the old “pineapple” grenades in both look and feel, and provide excellent traction in either bare or gloved hands. The handle has a non-symmetrical shape, with finger grooves on the lower side and a palm swell on the top, which makes for easy indexing of the edge even in pitch-black darkness. At the pommel end there is a tang extension for striking blows. The blade is 6 inches long, 1.3 inches wide, 0.16 inches thick and has a beveled straight clip, a blade geometry that has proven very effective in a combat role. It is made of 440C stainless steel hardened to RC 57-58 for easy field maintenance, and it also has a bead-blasted finish to reduce reflectivity.

Weight was a primary concern when designing this knife, and weighing in at 9 ounces (13.5 ounces with the sheath included), the Rival is roughly half the weight of an M9 bayonet. This is definitely one for the pro column for a guy humping 60-plus pounds of gear across a scorching-hot desert. It’s a given that any tactical knife has to presume use in close-quarter combat. However, not all uses of a knife in the field are so exciting; most tasks are more utilitarian. At 6 inches, the blade of the Rival is roughly 1-inch shorter than the M9 bayonet, yet it is still long enough to reach vital organs in CQB, or silence sentries the old-fashioned way. At the same time, it is also long enough to quarter large game, slice a roast or reach the bottom of a peanut butter jar. The sample I received came with a very sharp edge. This, combined with the blade’s hollow grind, made for slices into meat with very little resistance. These are definite pluses considering the fact that field life for some special operations personnel can involve long-term primitive living situations.

The blade also did well at cutting heavy webbing and rope. Cutting heavyweight 1.5-inch webbing material with a short blade can be a hassle, especially if the blade is not very sharp. The blade of the Rival, having a cutting edge four times as long as the webbing’s width and being extremely sharp, sliced easily through in one cut. It also cut through three strands of 0.5-inch-diameter utility rope in a single pass, and I barely registered the rope. Later, it easily sliced off rounds of 2.5-inch high-pressure hose. The smooth, uncoated blade met with noticeably less resistance cutting through the rubber than many coated blades I have used. The absence of a coating also meant no chance for flakes to come off in food while opening several tin cans. The edge suffered slightly more dulling from the abrasion against the metal than I expected, and I took this as a good sign in that the knife shouldn’t be too hard to sharpen in the field. The long blade is handy also in that the tip end can become dulled from opening cans, or digging up roots and tubers, while a couple of inches of sharp edge can be preserved near the handle. 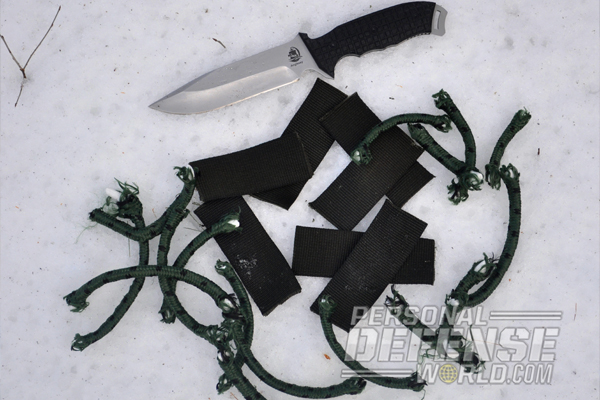 1 of 4
anglesey-cutting-rope-webbing
Even while working in extremely cold temperatures with very cold hands, the Rival’s handle offers a very secure grip and great control of applied force. The very sharp edge quickly cut 8 feet of 0.5-inch rope and 4 feet of heavy-duty webbing into small pieces. 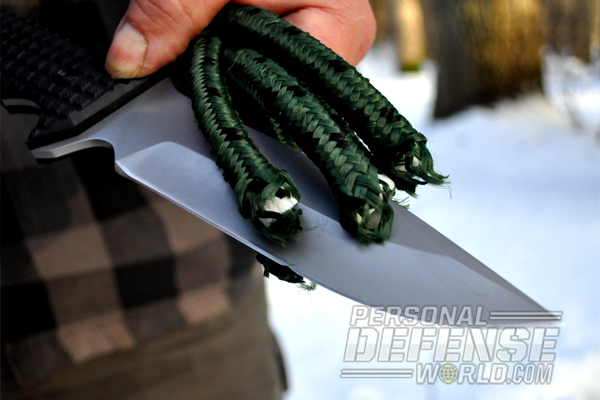 2 of 4
anglesey-cutting-strands
The Anglesey Rival sample received for testing came with a very sharp edge. In an initial cutting test the knife cut through multiple strands of 0.5-inch utility rope so fast, the author hardly registered the resistance. 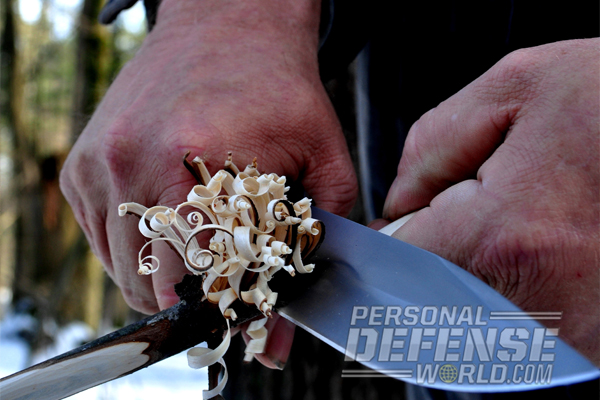 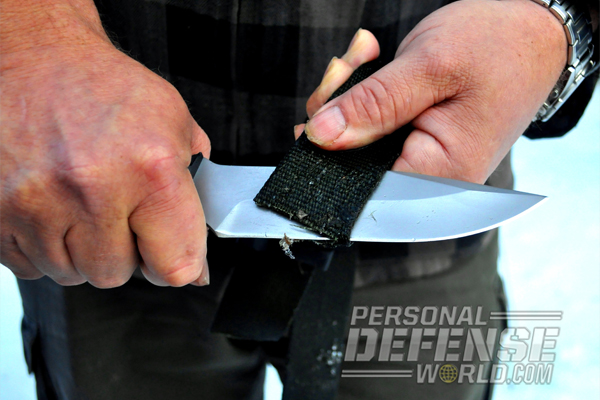 4 of 4
anglesey-cutting-frozen-webbing
Further cutting tests included 1.5-inch, heavy-duty nylon webbing material. The long, sharp blade of the Rival easily and cleanly sliced though the frozen webbing in one pass, and did so multiple times before showing edge degradation. 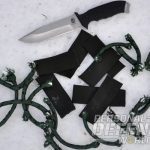 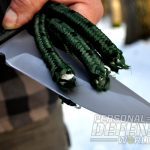 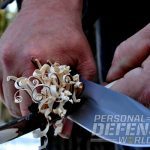 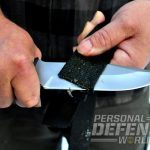 FIELD TEST:
The Blade-Tech MOLLE Lok is positioned near the top of the sheath, and the knife rides well on a standard belt. Since the carry system of the Rival was primarily designed for MOLLE/PALS compatibility, most of the time I chose to carry the knife inverted on the shoulder strap of my pack. I found this method offered the easiest access to the knife when needed, and the sheath does securely retain the knife in this position. In the subzero temps of winter, gloves are a necessity to avoid frostbitten fingers during prolonged exposure. The Rival handle is ergonomic in profile, hand-filling in size and the rectangular cross-section offers excellent control of twisting force applied to the blade. The heavily textured scales, and the finger grooves on the lower side of the handle, make for a very secure purchase in multiple holds, and it is actually more comfortable in hard use with gloved hands.

When the sun is low in the southern sky and the wind chill is -28 Fahrenheit, making a windbreak and starting a warming fire quickly become priorities. The balance point of the Rival falls just forward of the first finger, giving the knife a slight blade-heavy feel in a standard overhand grip, and when the grip is shifted rearward the knife’s chopping ability belies its weight and size. Now, obviously, it doesn’t chop as well as a machete, but the forward weight distribution and hollow grind allow the blade to bite deeper into green wood than one might expect from a 6-inch blade. Saplings 1.5 inches in diameter were felled relatively quickly, and two saplings tied to the limb of a fallen tree with a poncho stretched between them can make a serviceable windbreak. Out of the wind one can build a small fire, recover some strength to push onward, or assess the situation and develop a game plan on a more substantial shelter. With it being a knife that was purpose designed for a combat environment, the heavily textured handle will never win an award for most comfortable carving knife, but it does offer great traction in the grip, and excellent control of the blade when carving and whittling items like cooking forks, roasting sticks and spoon-like objects in the field. The finger choil, which in CQB offers a dull area to hook an index finger on to extricate the fight, in a utilitarian scenario allows the user to choke up on the blade for better control.

This is great for times of fatigue when fine motor skills are dulled and fine, thin curls of dead wood are needed for tinder in a damp or frozen environment. One of the features I really like about this knife is that the corner of the edge just forward of the finger choil is rounded and dull, which will help to avoid injuring an index finger while choking up on the knife blade for better control. Choking up on the blade with my right hand, and using the thumb of my left hand to apply the cutting force, I was able to whittle off very fine curls to make feather sticks for tinder material. Since I was working in wet, wintry conditions, I decided to use the sap dripping from a damaged pine tree as an accelerant to help ignite the mix of damp and frozen fuel I had gathered. The sharp edge threw great sparks from a ferrocerium rod to ignite the curls of wood, and I soon had a nice crackling fire to warm by as I tested the ease of in-field maintenance on the knife’s edge.

FINAL THOUGHTS:
One tradeoff for the corrosion resistance of a stainless steel is that in some cases stainless blades can be harder to sharpen in the field than their high-carbon counterparts. With the Rival being made of 440C (a high-carbon stainless steel) and having a relatively low hardness, it wasn’t hard to bring the edge back to more than just serviceably sharp. About 15 minutes with a 4-inch medium Arkansas stone removed all signs of the abrasion from opening the tin cans and the flattening caused by chopping though over 3 inches of frozen hardwood. As I finished sharpening, I reflected back on the use the knife had seen in the course of testing, then observed the knife in motion and turned it over in my hand. With the long, stainless, clip-point blade combined with the very grippy handle and pointy extended pommel, it had definitely served well in the role of a survival knife, and had passed all of my tests with high marks. It’s clear that a lot of thought was put into creating a lightweight but strong field knife for high-speed operations.

For more information on the Rival Survival Knife, visit: http://www.angleseygear.com/ 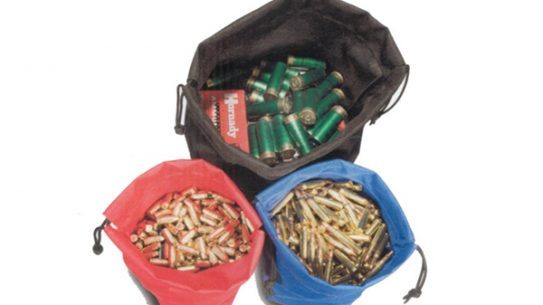