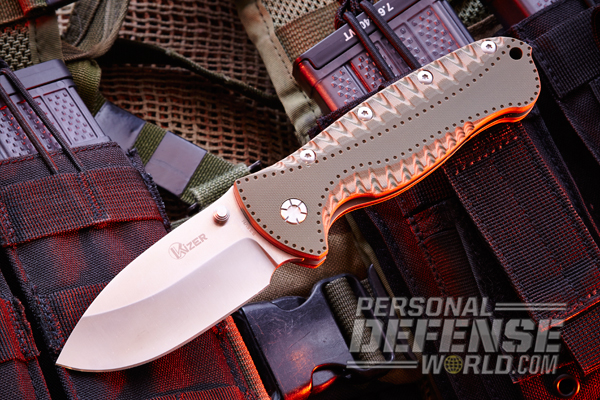 1 of 4
GTI Folding Knife
The polished finish and decorative handle may not yell out “tactical,” but the GTI Folder can hold its own with any military blade. 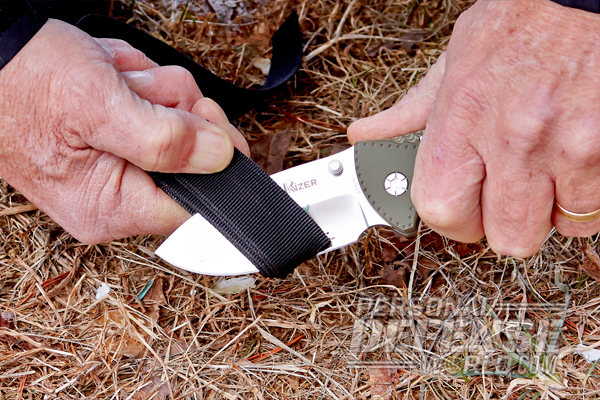 2 of 4
GTI-cuttiong-nylon-webbing
Nylon webbing has a tendency to slip over an edge during cutting. It takes a keen edge to make clean cuts in this material. 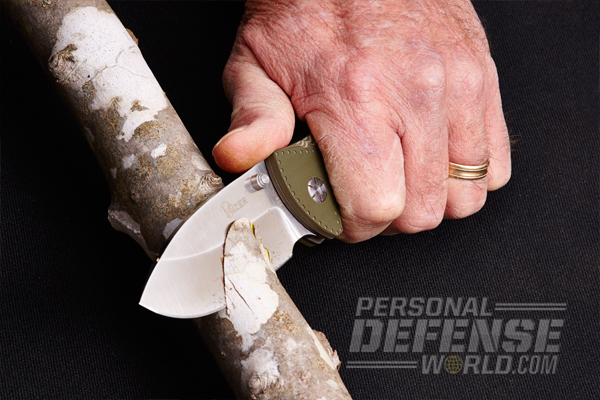 3 of 4
GTI-hollow-grind
The hollow grind found on this knife makes sure that the surface of the blade doesn’t drag while cutting. This type of grind may thin the blade somewhat but proved helpful while slicing both wood and meat. 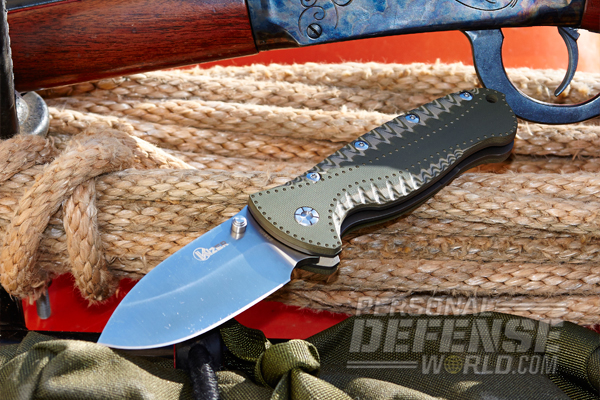 4 of 4
GTI-kizer-blade
The Gingrich/Kizer GTI proved to be a very valuable EDC knife, especially when the author had to go out into the woods on his ATV. 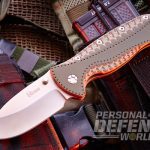 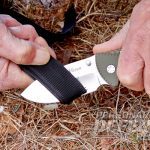 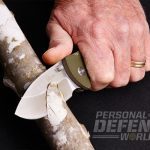 To see a new collaboration between a knife company and a custom knife-maker is nothing unusual. This is a trend that has been steadily growing, especially in the past 15 to 20 years. The factory brings production and marketing capabilities to the table, while the custom maker contributes his design skills. However, with the introduction of the GTI Folder, we see a situation where the designer is not only contributing his knife-making skills, but also his life experience. This new tactical folder is a joint venture between Kizer Cutlery and Justin Gingrich.

“The overall fit of the knife is outstanding and offers a smooth transition between the liners and handle scales.”

Many will recognize Justin as the force behind the Ranger series of fixed-blade knives, but his experience exceeds that of a custom knife-maker. Justin served four years in the 3rd Ranger Battalion before joining the 20th Special Forces Group for two years. His military career was completed with four years in the Ranger Training Brigade. After the U.S. Army, Justin put his skills to use as a contractor for a private security firm operating in Iraq, and again in post-Katrina New Orleans. Besides his work as a bladesmith, Justin now operates Gingrich Tactical Innovations. GTI currently provides training to the military, State Department employees and civilians in shooting, demolitions and close-quarter battle (CQB) techniques. If anyone has an understanding of the attributes required in a good tactical knife it is Justin Gingrich.

DESIGN INSIGHTS:
The GTI Folder (Kizer’s model Ki 4416A2) is a robust knife with a 3.5-inch, drop-point blade fashioned from CPM-S35VN. This new steel was introduced as an improvement over CPM-S30V, providing improved toughness and edge holding ability. S35VN has also proven to be easier to machine and polish, which is an added bonus for the production. The blade has a thickness of 0.157 inches and is hollow ground. The liners of this folder are 6AI-4V titanium and have green G10 handle scales. The liner-lock mechanism provides security once the knife is opened with the use of the dual thumb studs. The use of titanium assures that even with an overall length of 8.65 inches, the knife weighs only 7.5 ounces. The GTI Folder has stainless steel fittings and a spacer between the liners, which only cover half of the spine. This feature assists in keeping the knife clean and allows debris to fall through. There is a titanium pocket clip located on the right side, providing point-down carry. An advantage of this clip over some I’ve used is that it allows the knife to sit deep in the pocket, and other than the clip itself, the knife is barely visible. The handle pattern of the knife has a single finger groove, which also acts as a lower guard, and combines with a palm swell to provide a hand-filling grip. The 1.5-inch width of the blade gives the general appearance that the blade is shorter than its 3.5 inches.

The overall fit of the knife is outstanding and offers a smooth transition between the liners and handle scales. The partial grooving of the G10 along the spine and bottom of the handle enhances the grip, but not to the point of being uncomfortable. The blade has a smooth rotation while opening and the liner lock has been well fitted. The lock snaps in place with an engagement of over 75 percent, yet releases smoothly and without drag. The blade has a finish that can best be described as falling between that of S30V and 440 stainless. The finish is smooth and even, but not a clear mirror polish. 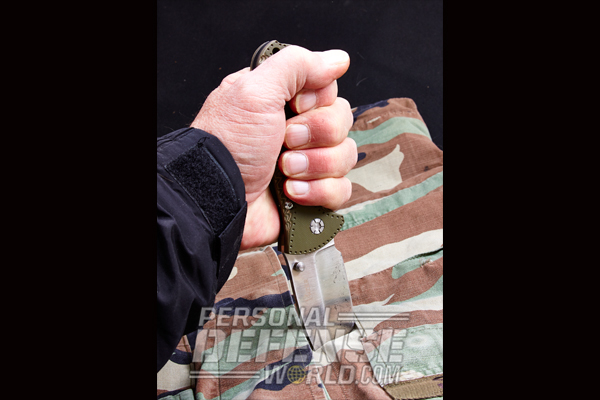 1 of 3
GTI-secure-grip
More so than any other time, a knife handle should provide a secure grip while stabbing. This is the one grip that wants to force your hand toward the cutting edge. 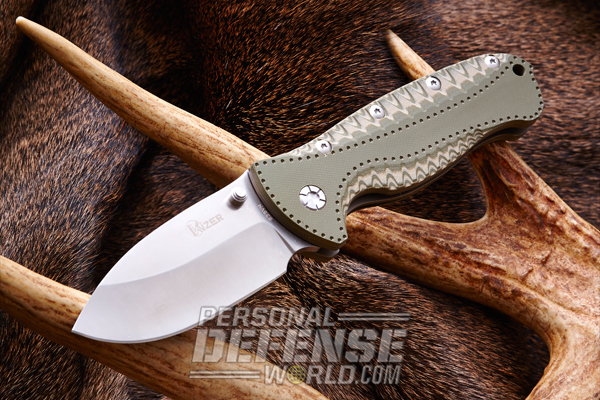 2 of 3
GTI-tactical-utility-blade
The GTI Folder may be ideal as a tactical utility blade, but its usefulness carries over to the civilian market. It makes a rather good hunting knife! 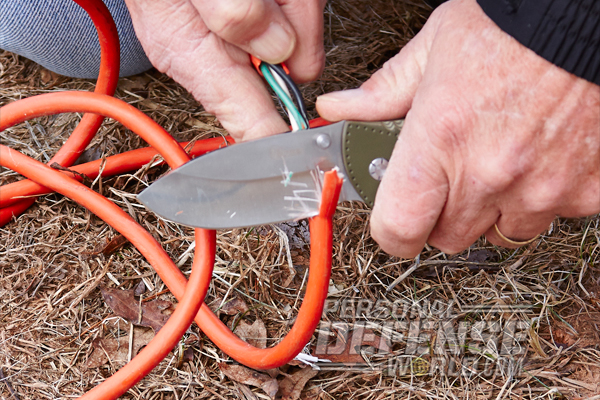 3 of 3
GTI-wire-strippers
Wire-strippers are a great little tool, but seldom are they something you carry every day. The value of a good utility knife is boundless. 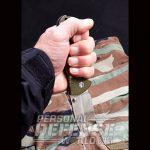 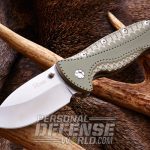 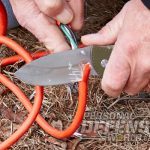 FIELD TEST:
In talking with Justin it became apparent that the main attribute needed in a tactical knife is utility. While the GTI Folding knife could make a formidable weapon, it is most likely to be used for more mundane tasks during a deployment. Although the knife looked almost too good to use (notice I said “almost”), I was able to give this folder a substantial workout over a two-month period. During that time it became my “everyday carry” knife and was subjected to a variety of chores. First, it is a bit larger than the knives I normally carry, but this only became noticeable when wearing lightweight dress slacks. The most notable of my uses during that time period came during our hunting season. The broad drop-point blade was perfect to skin and quarter deer. The G10 handles provided a firm grip during the process, and the blade length was ideal for the removal of the backstraps and hindquarters. The razor-sharp edge proved to be invaluable while slicing thin strips of meat in the process of making jerky. The weatherproof materials are also an asset while cleaning the knife after the deer processing is completed.

I may be able to brag about getting two deer in one day, but my image of the great outdoorsman was somewhat tarnished that particular evening, and the GTI Folder was put to another use. I live in the mountains and my ATV is four-wheel drive, which gives me the capability to do stupid things. To make a long story short, I found myself up the mountain with my ATV teetering on the edge of a substantial drop-off. I was at least smart enough to have this folder with me, and it came in handy cutting the 0.5-inch rope to secure the machine to a nearby tree. I wish I could brag about having the strength to snatch the ATV back onto the trail, but between the sloping foothold and 500-600 pounds of the machine, it was hopeless. This knife was never designed to cut a 3.5- to 4-inch tree, but even though it took some effort it did the job. The main problem was every time pulled upward on the rack of the ATV, the spring suspension allowed the wheels to stay in place. Only after cutting this lever was I able to place it under the driveshaft to force the machine back to the trail. The knife came through it fine. I, however, looked like a beaten dog! 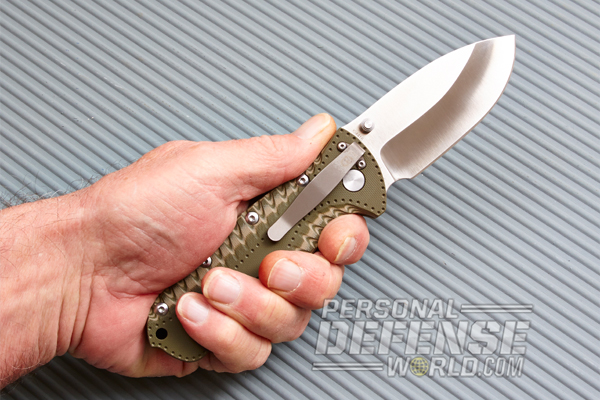 1 of 3
GTI-handle-contour
The handle contour creates a firm thumb rest while also acting as a lower guard. 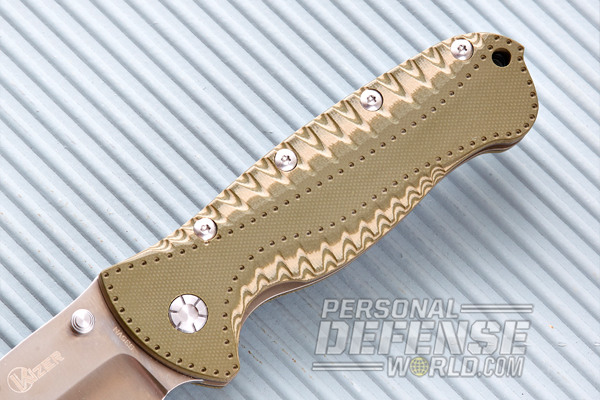 2 of 3
GTI-handle-design
The design of the handle and use of G10 scales proved beneficial while using this knife. The partial grooving in the scales provides more than good looks. 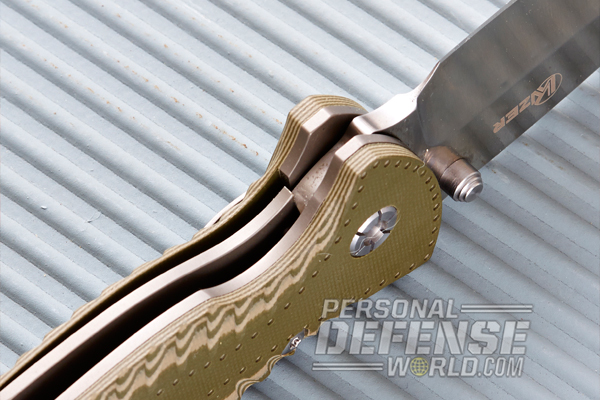 3 of 3
GTI-liner-lock
While shopping for a new knife, the area around the liner lock deserves special attention. Any knife designed to open can also close. It is the quality of the lock fitting that makes sure it closes only when you want it to. 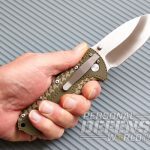 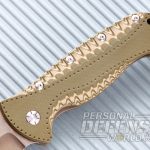 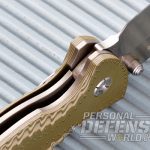 After that small adventure, the other uses the knife was subjected to seemed uneventful. I was refitting a tactical vest I use during training to hold spare magazines, and the GTI Folder was rather helpful in cutting the sizing straps. This only makes sense, since cutting the gear off a wounded soldier is one duty a tactical folder must excel at. The folder was always available around the house and outside, for chores ranging from opening the mail to trimming insulation off of electrical wiring. Granted, these tasks are not lifesaving, but just part of everyday activities. This two-month period of carrying the GTI Folder taught me a couple of lessons. First, you can never forecast the moment you will need a knife. And second, when you do need one, make sure it has the quality to handle whatever may come your way. The GTI Folder proved to be an outstanding knife in both utility and quality. Justin knows what a knife should be, and Kizer has the capability to carry his concept to production. 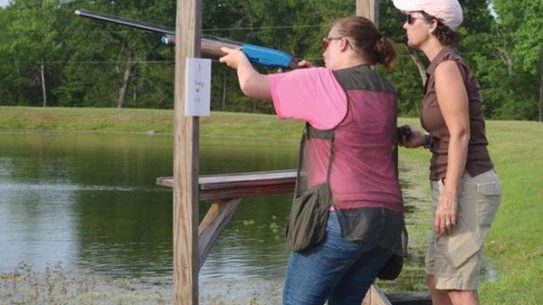