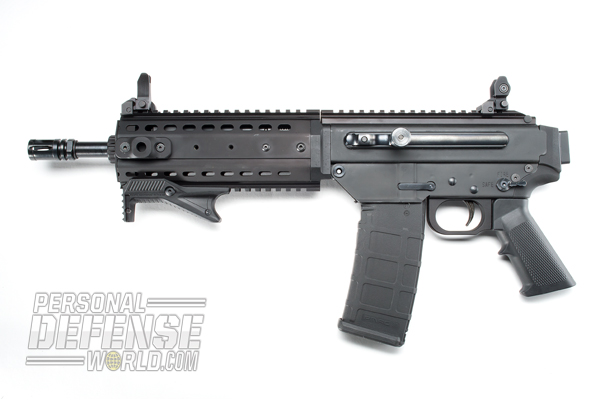 With AR-style pistols growing in popularity within the shooting community, author Doug Larson examined a recent offering from MasterPiece Arms, the MPAR556-P, to better understand this growing phenomenon in a review for the September 2014 issue of COMBAT HANDGUNS. But what surprised Larson during his review was how unique the MPAR556-P is in its design and how it has differentiated itself in a growing field of AR pistols.

Larson began his review by first listing the similarities between the MasterPiece design and other AR pistols. “Of course it’s chambered in the most popular AR pistol cartridge, the .223 Remington round, and it’s about the same size except that it lacks the receiver extension tube—it’s not needed with this innovative design. It also has an 11-inch barrel, which is very common, an A2-style flash suppressor, an A2 pistol grip and an upper and lower receiver that resemble those of an AR. It also uses AR magazines.”

Larson then moved on to the gun’s unique features, particularly its piston-driven operation. “The MPAR556-P Pistol differs in a number of significant ways from an AR. Some of these differences may actually make it more desirable for some users. Others will just like the fact that it’s different. First, it’s a piston gun, not a direct gas-impingement design. That has some distinct benefits over a direct-gas gun, although some will argue about that. Because hot gasses are not introduced directly into the receiver, as is the case with a piston gun, the bolt carrier group remains cooler and cleaner, which extends the time between cleanings and parts replacement.”

At the range, Larson found the MPAR556-P to offer a capable balance of power and portability. “Accuracy, as one might expect from an 11-inch-barreled pistol, was good,” said Larson. “The two-stage trigger broke at about 8.5 pounds after some take-up and a false break. It’s very similar to the feel of a GI trigger.” 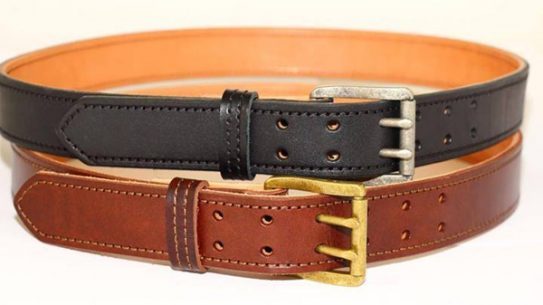 Amerihide's new gun belt is made from dual layer high quality leather which is...