A would-be robber was thwarted by a quick-thinking employee at a local Iowa bookstore.

According to KCCI, a man entered Discount Textbooks in Fort Dodge shortly before 9 a.m. He then covered his face with a bandana, pulled out mace and began demanding money.

“At that point, I opened up my register and took the till out and showed him I don’t have any money in my register,” said Jessica McDonald, 22.

The man then moved behind the counter and pointed the mace directly in front of her face, repeating his demands.

Fortunately for McDonald, Discount Textbooks keeps a gun in a safe behind the counter. She managed to get the gun from the safe and pointed the weapon at the man, telling him to leave the store while backing away slowly.

McDonald then told a person who phoned during the robbery to call 911. When the man began running, she chased after him in the parking lot, yelling out “Call 911!”

The would-be robber is described as a white man between the ages of 50 and 60 years old. He is roughly 5 feet 5 inches tall with gray facial hair.

This story could have had a very different ending were it not for the handgun used by McDonald.

Paul Tigges, manager of Discount Textbooks, says the firearm is there for employees’s safety.

“Anything could happen had we not had that firearm in that store and she did not have access to it,” Tigges said. “We’ll never know what might have happened.”

McDonald said she was initially surprised when she learned a gun was kept in the store.

“It was shocking to me when I started here that there is a gun and I always thought it was over the top and we didn’t need it, but I’m very glad that we have it,” she said. 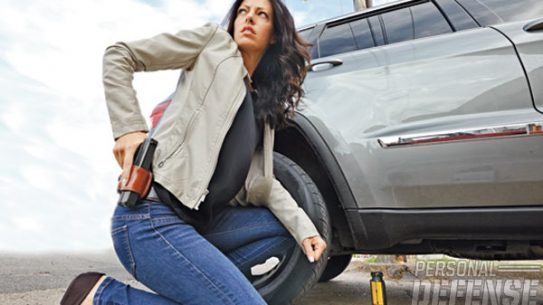 The top 10 tips for traveling safely encompass a series of personal habits and...