Whether you use a handgun, shotgun or rifle for protection, modern optimized ammunition can improve your performance.

Handgun, rifle and shotgun ammunition have improved greatly over the last five decades. Today’s ammunition is optimized for performance over a broad variety of personal defense situations. So, whatever your needs, chances are there’s at least two or three loads for you to choose from. Click through to read a breakdown of the top 8 defensive loads available on the market.

Revolvers and semi-autos chambered in .22 LR and .22 Mag are often used for self-defense. Because .22 LR is designed primarily for rifles, it rarely expands when used in handguns. However, some newer .22 Mag loads do expand when fired through short barrels. The 40-grain Speer Gold Dot Short Barrel JHP, 45-grain Hornady Critical Defense FTX and 40-grain Winchester Defender JHP all expand to about 0.3 inches and penetrate 10 to 12 inches in various media. They also deliver 100 to 140 foot-pounds of energy (fpe) at the muzzle. Rimfire guns chambered in .22 Mag. may not have the stopping power of a .45 ACP, but they are not to be taken lightly.

The centerfire handgun cartridges that have undergone the most reengineering are the .38 Special, 9mm, .357 Mag, .40 S&W, .44 Special, .44 Mag and .45 ACP. Almost every manufacturer makes at least one, if not several, defensive loads for these calibers. In addition, optimized loads are available for many less-popular handgun cartridges not covered in this article.

The .38 Special and .357 Mag are very versatile cartridges, and there are many controlled-penetration and deep-penetration loads for both calibers. Hornady’s new 90-grain Critical Defense Lite FTX produces relatively low penetration in 10 percent gelatin and also has reduced recoil, which will help recoil-sensitive shooters improve their accuracy.

In .357 Mag, low-penetration loads like Glaser Safety Slugs and the 110-grain JHP loads from Federal, Remington and Winchester generally produce less than 10 inches of penetration in 10 percent gelatin. Shooters who require moderate penetration, in the range of 10 to 13 inches, will be well served by the 125-grain JHPs from the same companies. Some of the newer optimized bullets for the .357 Mag offer even deeper penetration and are also quite effective against light barriers. CorBon’s 125-grain DPX, Winchester’s 125-grain PDX1, Remington’s 125-grain Golden Saber, Hornady’s Critical Defense 125-grain XTP and most 158-grain JHPs should perform this task well. For protection against bears and large animals, the .357 Mag is not the best choice, but several companies do make 180-grain loads with hard-cast bullets that penetrate very deeply. Hikers who want protection against snakes should try CCI’s .38 Special/.357 Mag shotshell.

High-penetration 9mm loads that have been optimized for both deep tissue penetration and effectiveness against barriers include most 147-grain JHPs; Black Hills’ 115-grain, +P TAC-XP; CorBon’s 115-grain, +P DPX; Federal’s HST; Speer Gold Dots; Federal’s LE-only Tactical Bonded; Remington Golden Sabers; and Winchester’s 125-grain Defender and LE-only Ranger T. Given today’s high-performance optimized bullets, there is really no reason to use +P+ cartridges in 9mm or in most any other caliber.

The .40 S&W is a big/medium-bore handgun cartridge, and there are few truly low-penetration loads for it other than the Glaser Safety Slug and Federal’s Guard Dog. There are some moderate-penetration loads that weigh between 135 and 155 grains. These are not likely to exit on torso shots, but they generally have a reputation for causing accelerated wear on pistols. Many of the most popular .40 S&W loads produce a minimum of 12 inches of penetration in 10 percent gelatin and also penetrate common barriers. The optimized bullets contained in Barnes’ 140-grain TAC-XP CorBon’s 140-grain DPX; Black Hills’ 140-grain TAC-XP; Hornady’s 175-grain Critical Duty; Speer’s 165- and 180-grain Gold Dots; Winchester’s Defender; Federal’s HST; and Remington’s Golden Sabers are all good performers. The 165- and 180-grain Winchester Ranger-T LE-only loads also perform well.

General-purpose defense loads for the .45 ACP range in weight from 160 to 230 grains. They include many standard-pressure as well as +P offerings that contain larger-caliber versions of the same optimized bullets found in .40 S&W. Given their greater bullet mass, few of these loads can be considered to provide low or moderate penetration. Optimized bullets in this caliber consistently expand and penetrate despite the relatively low muzzle velocities generated by the ever-popular “G.I. .45.”

The .44 Mag is primarily a hunting caliber, but there are two .44 Mag mid-range loads that have reduced recoil and are the best choices for personal defense. Speer’s 200-grain Short Barrel Gold Dot produces just over 500 fpe at the muzzle. Winchester’s 210-grain Silvertip HP delivers 729 fpe. Both of these loads expand well and penetrate at least 12 inches. The .44 Mag is adequate for most big game when bullets of 225 to 310 grains are used. Even so, it is still a bit light for defense against large bears. CCI also offers an effective .44 Special/.44 Mag shotshell for snakes.

Combination handguns, like the Taurus Judge and S&W Governor that can fire .410 gauge shotgun loads or .45 caliber handgun rounds are quite popular. For these guns, any .410 load with #4 shot would be a good choice for snakes. Anti-personnel loads in .410 include Winchester’s Defender round with defense discs and BBs, Federal’s Handgun Buckshot load, Remington’s Ultimate Home Defense buckshot and Hornady’s Critical Defense buckshot and FTX slug load. The Winchester load generates the largest pattern and least penetration of these loads. When using any shotgun ammunition for defense, one needs to pattern the gun to determine its effective range with a specific load. Knowing how the pattern spreads can also help avoid collateral damage.

The Judge will also fire .45 LC ammunition, and the Governor can fire .45 LC and .45 ACP loads. Bullets from these .45 cartridges tend to penetrate deeply and not expand well because they don’t develop high velocities when fired in the 2½- and 3-inch .410 chambers used in these guns. 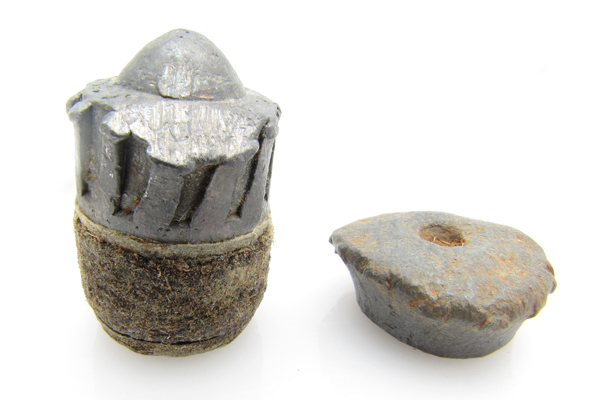 The vast majority of people who use shotguns for defense prefer 12 gauge pumps and semi-autos. The most effective loads in this gauge contain #1 buckshot, 00 buck or slugs. One Defender buck and ball load from Winchester contains a slug and three 00 buckshot. Some people choose birdshot for defense, but its penetration may not be adequate if the target is wearing heavy clothing. Pump shotguns handle very fast and shoot tight patterns with reduced-recoil loads like the tactical buckshot and tactical slugs made by Federal, Winchester and Remington. Some semi-autos will also function with tactical loads, but full-power loads are the most reliable ammunition for autoloaders.

Slugs generally give deeper penetration than buckshot does, although hollow-point slugs expand well and penetrate less than standard Foster-type slugs. Winchester’s Defender segmented slugs fragment and also have less penetration. Hardened slugs like the Original Brenneke and the Sabot slugs designed for rifled shotgun barrels are best reserved for hunting and defense against large predators.

Those who use 20 gauge guns for protection might try Federal’s Premium 3-inch Mag load with #2 buck. In addition, most 20 gauge Foster-type slugs are suitable for personal defense. Fans of the .410 can use the shotshell loads mentioned above.

Selecting ammunition for personal defense requires striking a balance between the skills of the shooter, the power of the cartridge, the penetration characteristics of particular loads, the risk of collateral damage in the places the gun will be used, and the reliability and accuracy of specific loads in specific guns. The material presented here provides some helpful guidelines for selecting loads, but individual gun owners must make the final choice based on an analysis of their specific needs and capabilities. Always remember that the circumstances of individual shootings vary greatly and may prevent a bullet from expanding or penetrating as designed.

Protect Your Investment with the Hornady Security Ammo Cabinet