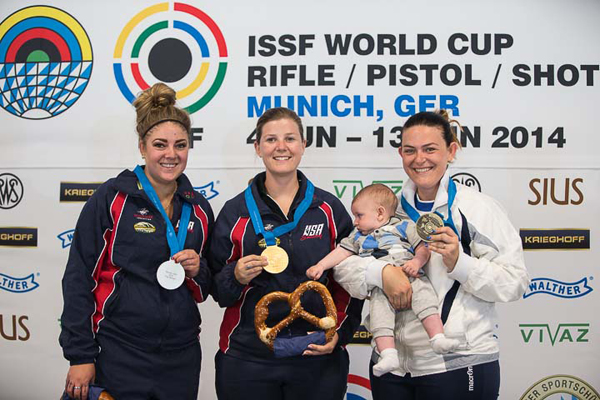 (L-R) Silver medalist Janessa Jo BEAMAN of the United States of America, Gold medalist Victoria Rose BURCH of the United States of America and Bronze medalist Alessandra PERILLI of San Marino pose with their medals after the Trap Women Finals at the Olympic Shooting Range Munich/Hochbrueck during Day 1 of the ISSF World Cup Rifle/Pistol/Shotgun on June 6, 2014 in Munich, Germany. (Photo by Wolfgang Schreiber)
Comment(s)

The drought is over. The Men’s and Women’s Trap Program for USA Shooting earned its first medals at the ISSF World Cup in Munich, Germany by capturing gold and silver. According to Women’s Outdoor News, Victoria Burch (Kerrville, Texas) captured the gold and Janessa Beaman (Colorado Springs) won silver.

“It’s amazing,” Burch said in a phone interview Friday afternoon. “There’s no other way to describe it. To win in only my second international match shooting my first international final is something special. I’ve struggled shooting this new finals format, but today it all just came together. It was a tough match overall with the pressure that comes when everyone is shooting high scores. You can’t mimic this anywhere but in an environment like this and I’m just happy to have withstood.”

As Women’s Outdoor News reports, Burch had only once previously competed in an ISSF event, when she placed 33rd in the Sydney World Cup in 2011. On her medal-winning day, she earned three excellent qualification scores (25, 24 and 25 hits), and finished second place in the semifinal behind Beaman with 14 hits.

In the gold medal match, she beat out Beaman, 15 to 14 hits, to win her first-ever ISSF gold medal.

“The gold-medal match felt really good,” Burch said. “I was really focused and relaxed, because I knew that either way I was going to come out with a medal.”

According to Women’s Outdoor News, Beaman, the 2011 Junior World Champion, recovered from a disappointing performance in the Almaty, Kazakhstan World Cup last month to win her first World Cup medal.

“We got to shoot a lot of practice here since Almaty,” Beaman said. “That familiarity led to a lot of confidence throughout the match.”

The first target is what cost Beaman the gold in her match against Burch. She described it as a “wake up call” which allowed her to focus on the remaining 14 targets.

Women’s Outdoor News says tHAT 1,300 shooters from 96 countries are competing at the 1972 Olympic Shooting Range in the 15 Olympic shooting events of Rifle, Pistol and Shotgun, June 6-12 at the fourth leg of this year’s ISSF World Cup Series.

Rifle and Pistol competition begins this Sunday with Men’s and Women’s Air Rifle, Men’s Free Pistol and the start of Women’s Sport Pistol. To stay up to date on ISSF World Cup Munich results, click here. 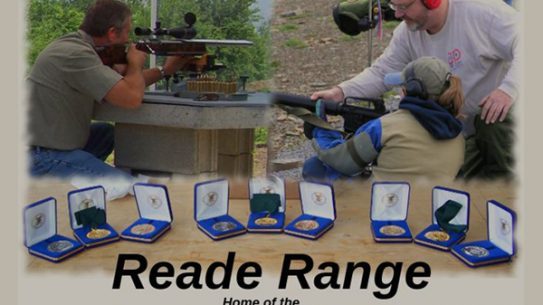 The annual Remington Long Range Open took place on May 30-June 1 at Reade...