An Alabama grandmother used a 9mm handgun to shoot an intruder who had entered her home.

According to the Daily Caller, Phyliss Law, 63, was at her home in Prichard, Alabama when she realized someone was trying to break in. She immediately grabbed her gun and an extra magazine.

“Next thing I know, he hit the lights and put all the lights on and I’m saying to myself, ‘This person been here before to know where all my
lights at,’” she told WALA.

Law went to the living room and got down on the ground while her granddaughter hid in a closet.

“He just comes strolling walking around,” she said. “By the time…He was right here I saw the blue jogging basketball pants he was wearing. And when he got there I jumped up and just start shooting. I have no idea where I hit him. He fell right there on the floor there.”

As WALA reports, Law fired three shots. The first shot hit the suspect in the head. The other two shots hit the the air conditioning unit which the intruder had crawled inside of after being shot.

Law, who boarded up her windows after a previous burglary, said she didn’t want to end up a victim.

“When they’re coming in, they’re coming in you don’t know what they have on them. A lot of them come in people’s house, kill me, take what they want and leave. Well, like I said, not here. No, no they are not going to walk up in here. They did enough,” she said.

When police arrived on the scene, Law removed the magazine from her gun and took out her ID. Police handcuffed her while they assessed the situation, but they eventually let her go.

The injured suspect is expected to survive his injuries. A second suspect was also arrested nearby. 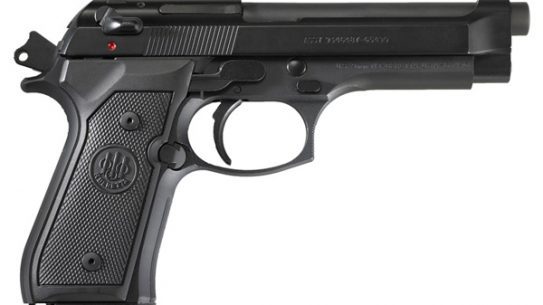 Beretta to Move All Manufacturing Capabilities to Tennessee

Beretta has announced plans to move all of its manufacturing capabilities from its Maryland...