An armed doctor opened fire on an active shooter at a local Pennsylvania hospital after the suspect killed a female case worker.

According to MyFoxPhilly.com, the incident took place in a 3rd floor psychiatric office at the Sister Marie Lenahan Mercy Wellness Center across from Mercy Fitzgerald Hospital near Yeadon in Darby, PA.

An employee heard loud arguing emanating from the office and went to investigate. He discovered Plotts brandishing a gun, Whelan confirmed. The employee closed the door to the office and dialed 9-1-1. Just after that, Plotts shot Hunt and Silverman.

As MyFoxPhilly.com reports, DA Whelan said that another doctor and case worker forced their way into the room and tackled the suspect to the ground, taking the gun away.

Hunt, 53, was killed. Silverman suffered a graze wound to the head.

Police believe there was an exchange of gunfire between Plotts and Silverman. Plotts was shot three times in the torso area and is currently in critical condition.

“We believe there were two guns retrieved at scene, one with the perpetrator and one the doctor possessed. At this point in time it needs to be verified. We believe the doctor was acting in self-defense, ” said DA Whelan.

Yeadon Police Chief Donald Molineux told Philly.com that if Silverman opened fire on Plotts, he “without a doubt saved lives.”

Despite the heroics of the armed doctor, he might be in danger of losing his job. As GunsSaveLives.net points out, the Employee Code of Conduct for Mercy Health System states that “Employees are prohibited from bringing firearms or explosives of any kind into the workplace.”

Stay tuned for more as this story develops. 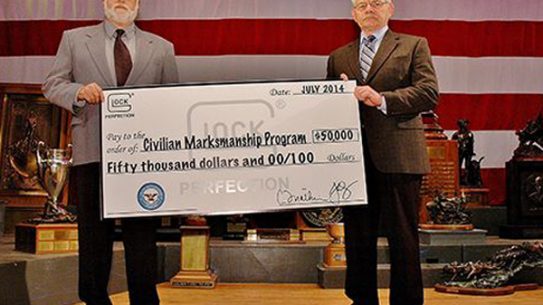 Glock has donated $50,000 to the Civilian Marksmanship Program as part of its new...