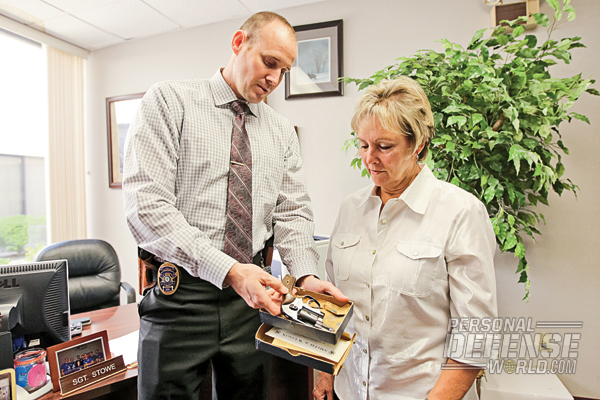 Stolen 44 years ago, and recently found in a drug dealer’s house, a father’s Smith & Wesson .38 Special revolver is returned to his daughter.
Comment(s)

My brother was the first to receive the shocking phone call from the police in our hometown of Conroe, Texas. During a drug raid on a house in Conroe, they’d found something belonging to my late father and asked if I could come pick it up.

My mind spun as I imagined the possibilities. I had no idea what these strangers could possibly have that belonged to my beloved father, who had passed away in 2009. But when Conroe Police Sgt. Brent Stowe showed me a tattered-looking tan box, I instinctively knew what they’d found. It was my father’s Smith & Wesson .38 Special snub-nose revolver.

“I remember this box!” I exclaimed as I looked it over. The police had even recovered the original paperwork with my father’s name on it.
Last year, the Conroe PD intercepted a package full of marijuana and executed a search warrant on the home to where it was being mailed. They found the gun in the closet, still in the box where my father had stored it.

It took some real detective work to find out where the gun came from. My father owned a small liquor store in downtown Houston called the Bottle Shop. By examining decades-old reports, the Conroe police learned that the Bottle Shop had been robbed in October 1969. The thieves broke in after-hours and stole three cases of whiskey, three cases of scotch, one case of rum, 10 cases of cigarettes and the gun. My father carried it to protect himself in exactly that type of scenario: a robbery late at night, when he was alone at the Bottle Shop.

How did the gun end up inside a house not far from mine 44 years later? After they were busted on marijuana charges, the homeowners denied any knowledge of who had stolen the gun in 1969. The police believe the gun sat in its box, untouched, the entire time.

The gun might be the key piece of evidence in solving a decades-old crime, but, for now, I’m just grateful the police found me. My father took pride in his store. Even though he has passed on, it feels good to have his prized S&W back in my family’s hands.

It was a cool fall evening in the boonies of North Carolina. Like most days, it was a beautiful day to shoot. My then-girlfriend’s father owned and operated his own personal protection and weapons training business, as well as an NRA-approved range at his own home on the outskirts of a small town.

We had met for a few hours to go over some shooting drills and really tune up my defense-style shooting. We concluded around 8 p.m. that night. Before leaving, I packed my Rock Island Armory 1911 in its case and loaded my truck. My girlfriend’s father suggested that, although I was going home, I load my pistol and open carry it on my way home. Recognizing the wisdom of his advice, I unpacked my firearm and ammo, dropped it in my holster and threw it on my hip.

On my way home, I received a call from my mom asking me to pick up soda on my way home. I pulled into the next gas station I came across. I was unfamiliar with the area, but it seemed a safe-enough place.

I pulled up to the parking spot beside the door and exited my vehicle. As I approached the door, I hear a loud bang from behind me. I turn to see a car jump the curb loaded with some “less-than-friendly” looking characters. Two were armed with bats and another with a knife.

By now I had positioned myself with my openly carried 1911 and ordered the gentlemen to stop. They looked in my direction and froze. One of the men yelled, “Gun!” The three would-be criminals hopped back into the car and retreated quicker than they had arrived. I like to think my actions saved the people in the store and me. Lesson learned: No matter how proficient you are with your weapon, it won’t do you any good unless you have it with you.

My husband gets up around 4:00 or 5:00 a.m. to go to work, leaving our two young sons and me to sleep peacefully for at least two more hours. So when I awoke one dark morning to the sound of loud footsteps, followed by doors opening and closing, I assumed he had forgotten something and returned home for it. But, our guard dog Ripley began growling. Something didn’t seem right.

I decided to call my husband. He answered on the first ring and told me that he hadn’t come home. I realized in terror that an intruder must be in the house. My mind flashed back to a night, years earlier, when I was awakened by the sound of someone trying to force open my apartment door. I didn’t have a gun then, and I was absolutely terrified. But this time was going to be different. This time I grabbed my 9mm handgun and prepared to confront the home invader.

I called 911, but soon realized the police wouldn’t come in time to stop the home invasion. I was not going to let them get to my children. I steeled myself and threw open the door.

I realized the invader must have watched my husband leave and decided it was time to strike. However, he did not expect to meet me with a gun. But I was ready and made sure he understood the danger of his mistake. Thankfully, I did not have to shoot him. The invader turned and fled as I moved out to confront him, leaving a frantic trail of muddy footprints.

I don’t want to ever have to shoot someone, but I absolutely will do so to protect my kids and myself. Maybe some people would cower in fear, but that’s not me. And that’s why I have a gun. 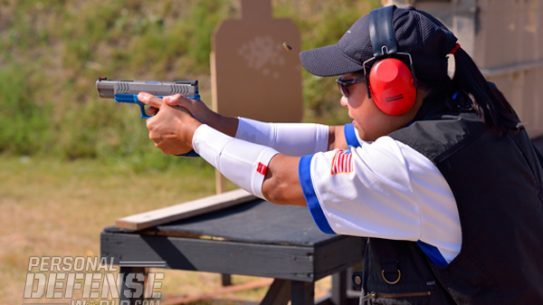 The IDPA tests shooters of all skill levels in a variety of real-world scenarios...