On September 26, 2012, the PNP made the largest pistol order in the history of GLOCK, Inc., requesting the shipment of over 74,000 GLOCK 17 Gen4 autopistols to be distributed among the agency’s 146,000 officers.

The beautiful Republic of the Philippines is a sprawling, democratic, constitutional republic consisting of 116,000 square miles of territory spread across 7,107 islands. Within the country’s three major island groups—Luzon, Visayas and Mindanao—are 17 regions, 80 provinces and 138 cities sheltering a population of more than 97 million ethnically diverse people. With its world-class beaches and resorts, historical sites and many unspoiled inlands, the Philippines is a major attraction for regional holidaymakers. Tropical island destinations such as Boracay and Cebu attract an ever-increasing international crowd year round.

The Philippines was and remains an important ally to the United States and Europe, having supported American armed interventions into Korea, Vietnam and Iraq. The Philippines was the location of the first protracted American-Japanese battles of World War II, which ended with Gen. Douglas MacArthur uttering his prophetic words as he left to plot the recapture of the Philippines and the larger Pacific, “I shall return.” Ensuring his triumphant re-arrival several years later were American victories in the battles of the Philippines Sea and Leyte Gulf—two of the largest, most comprehensive naval battles ever fought, in which a rebuilt U.S. Navy dealt a knockout blow to the crumbling Japanese fleet.

One legacy of the U.S.’s long-standing presence in the Philippines is the similarity of the two countries’ firearms laws. Many Filipinos, just like many Americans, are avid gun owners and shooters. Also, just like its peers in American law enforcement, the Philippine National Police (PNP) understands the necessity of having the upper hand in any potentially violent situation, which means, of course, having the best equipment. It comes as no surprise then that the PNP has opted to purchase and carry GLOCKs, as do more than 65 percent of North America’s police officers. In fact, on September 26, 2012, the PNP made the largest pistol order in the history of GLOCK, Inc., requesting the shipment of over 74,000 GLOCK 17 Gen4 autopistols to be distributed among the agency’s 146,000 officers.

The Philippines is defended by its armed forces, which consists of three branches: the Air Force, the Army and the Navy (which includes the Marine Corps). Civilian security is handled by the PNP, among whose departments are the country’s special operations forces (SAF) and its prestigious National Bureau of Investigation (NBI), both of which already use GLOCK pistols. As mentioned, the PNP is comprised of over 146,000 personnel, but only about half of them carry issued sidearms. In an attempt to arm all of their federal law enforcement officers with the best pistol possible, the government of the Philippines devised an evaluation program based on a series of transparent and logical tests to determine the cost-effectiveness, reliability and ruggedness of each prospect.

The first stage of testing determined the optimal cost of purchasing and maintaining each pistol. It involved a review of the firearm’s worldwide performance with other law enforcement agencies, as well as an honest evaluation of the manufacturer’s ability to produce and deliver the desired sidearm for the contract price. That done, the process transitioned to the second stage, in which the firearm was physically tested.

The second stage included accuracy, magnetic particle, steel composition and “torture” testing. Over a four-day period, testers fired 5,000 rounds of 9×19 ammunition per day from a single test handgun, shooting 20,000 rounds in total. To put these numbers into perspective, 20,000 rounds over four days comes to an average of seven rounds fired per minute for 12 hours. Or, put another way, one round was shot successfully every nine seconds from 6 a.m. to 6 p.m. for four consecutive days!

The winner of the PNP’s tough but fair competition was GLOCK, and the reward was an order for over 74,000 G17 Gen4 9×19 pistols. The guns will be distributed through GLOCK Asia-Pacific Limited and GLOCK’s Philippine partner, Trust Trade. The company will provide the PNP with a well-established venue providing maintenance and warranty support, so that when a GLOCK needs service, it can be handled locally.

What makes the G17 Gen4 a winner? Not only is it based on GLOCK’s most seasoned and proven model—the first autopistol GLOCK ever produced—in its new Gen4 iteration it also features a dual recoil spring, a reversible magazine catch and interchangeable backstraps, offering users three different grip sizes. Chambered in 9×19, the G17’s ammunition is available worldwide, and is easier and cheaper to shoot than most other service ammunition. Comprised of only 34 parts, the superbly engineered GLOCK design features a trio of patented SAFE ACTION safeties, offering users a simple yet very safe pistol with comparatively few components and outstanding reliability.

Elected in May 2010, Benigno “Noynoy” Aquino III, the 15th and current president of the Republic of the Philippines, is an avid shooter and GLOCK owner. In a ceremony timed to coincide with a scheduled police shooting competition, President Aquino personally distributed the first of the PNP’s brand-new G17 Gen4s to members of the Bacolod City Police Office (BCPO), one of the priority law enforcement agencies selected to receive the first run of G17 Gen4s. Showing his commitment to protecting both the officers of the PNP and the Philippine citizenry, President Aquino wished to initiate in person the process of arming the PNP with modern, standardized firearms. His officers will receive not only the best sidearm in the world, but also support and instruction in properly maintaining and shooting it.

Each new PNP G17 Gen4 comes equipped with front and rear luminescent sights, special PNP serial numbers and a PNP logo engraved on the slide. Packaged with every pistol are three magazines. 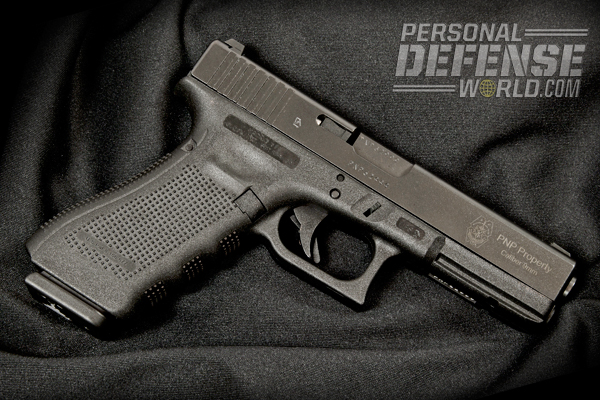 When people decide to buy a handgun, they typically base their decision on a given gun’s mix of cost-effectiveness, accuracy, reliability and ease of maintenance. The PNP has done just that, seeking to give its sworn officers unrivaled personal protection while also receiving from the chosen manufacturer excellent value. Like a savvy shopper at a gun shop, the PNP demonstrated exceptional foresight, fiscal responsibility and an acute understanding of what it is that makes a gun useable, accurate and reliable. Naturally, they chose GLOCK—or, more precisely, they chose over 74,000 GLOCKs—building a national arsenal guaranteed to keep its officers and citizens safe for many years to come. The fact is, when using a logical cost-benefit analysis focused ultimately on protecting what’s essential, the decision is inescapable: Whether to protect a single family or an entire nation, GLOCK autopistols are hands down the best, most reliable choice. Indeed, GLOCKs are cost-effective, but an unbreakable trust in the effectiveness of one’s personal protection sidearm is priceless.