According to the SJSO police officers interviewed, GLOCKs are “comfortable,” “reliable,” “lightweight,” and “great” guns.

The historic St. Johns County Sheriff’s Office (SJSO) dates to 1821, when General Andrew Jackson appointed the county’s first sheriff. Located just south of Jacksonville, Florida, St. Johns is 821 square miles large and boasts a population of nearly 200,000. In the center of St. Johns county is St. Augustine, the oldest continuously occupied European-established settlement and port in the continental United States. St. Johns is also home to the oldest masonry fort in the continental United States, Fort Marion (now preserved as the Castillo de San Marcos National Monument), which, until its being named a federal historic site in 1924, served for 251 years under five different national flags. 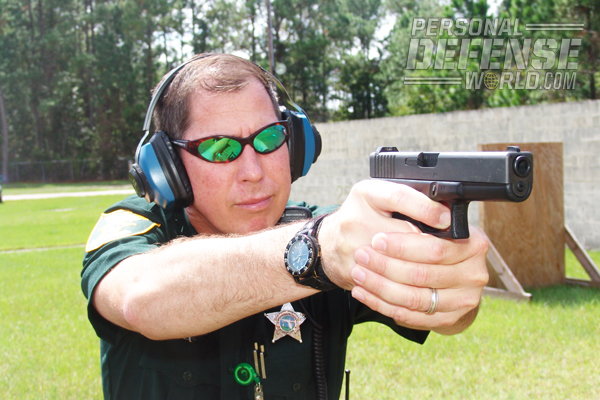 Though largely urban or suburban, with roads, schools, shopping and tourist areas, St. Johns County also features large swathes of remote and densely wooded terrain, as well as off-shore and inland waterways enjoyed by both tourists and locals. St. Johns’ beaches, some of which are covered with white powdery sand and others with “coquina” or finely ground sea shells, include hard-packed stretches on which motorists can drive and park, though they’re far less crowded than nearby Daytona Beach.

St. Johns’ physical size and geographical diversity poses sizable challenges to a Sheriff’s office tasked with covering all of the unincorporated parts of the county—challenges not only physical and logistical, but also material. St. Johns’ hot, humid, marshy, saltwater-infused climate takes a toll on equipment. Needing a sidearm they could rely on in any situation and in any condition, most of the officers of the SJSO, and every member of SJSO SWAT, have chosen the GLOCK as their on-duty service pistol. As SWAT Commander Sergeant Brian Canova said, “Every SWAT team member uses the GLOCK 17 9×19 because of its reliability and its great success. We recently did a ballistic gel test and were very satisfied with the performance of the round, and recent [officer-involved] shootings have shown that the 9×19 round works really well for us.”

One deputy who is part of the SJSO SWAT team but whose “full-time” job is to patrol the beaches and waters of St. Johns County is Patrolman Keith Oke. Though usually found on his four-wheel quad, on which he traverses the many miles of St. Johns County beachfront, Keith also pilots a SJSO multi-seat “Personal Water Craft” (PWC) in order to monitor the waterborne activities of citizens and tourists. Although the powerful quad and PWC are usually seen as recreational vehicles, both are as useful for patrol as a Crown Vic or a Dodge Charger. However, when an officer’s kicking up sand on off-road vehicles or getting splashed with saltwater sitting on a watercraft, his or her gear is completely exposed to extreme and constant environmental stress. Not coincidentally, the officers most often assigned to coastal patrol universally carry GLOCKs. In fact, the SJSO has singled out two firearms for carry during the operation of personal watercraft. Both are GLOCKs.

The two GLOCKs the SJSO set aside for waterborne law enforcement operations are G17-series 9×19 pistols. Interestingly, none of the agency’s GLOCKs have undergone refinishing or been specially coated. As the SJSO and countless other agencies have discovered, a GLOCK’s out-of-the-box finish is entirely sufficient to prevent rust and corrosion. When called on, every GLOCK has maintained its reliability and accuracy even after years of exposure to deleterious saltwater conditions.

When asked about his G17, Deputy Oke replied, “I like it for a faster second, third or fourth round for [multiple-target] engagement, but most of all, since I am a beach patrolman, I really like the decreased rust and wear on the weapon. With just simple oil and routine cleaning, we have been using the same GLOCKs for three years, and so far we have had no issues. Compared to other makes that showed rust all the time, I have had no rust on my GLOCK at all.”

GLOCKs on the Job

Another SJSO GLOCK user is SJSO Corporal Robbie Robinson. A member of the SWAT team, Corporal Robinson uses a GLOCK 21 SF in .45 AUTO as his duty weapon. Said Robinson, “The .45 AUTO is something that I was comfortable with, so when I had an opportunity to go to a GLOCK platform and stop carrying a pistol that had two different trigger pulls (double action and single action), I did. It shoots accurately, I like it because it fits my hand, and it is an all-round reliable pistol and great gun.”

Another SWAT operator and patrol officer with whom I had the privilege to ride along was Deputy Napolian Staggers, who did a great job handling throughout his shift everything from an accident to errant drivers to unruly miscreants. A left-handed shooter, “Nappy” noted that, “I love my GLOCK 17. It is lightweight, comfortable, and it fits my big hands. I shoot much tighter groups, and I am a firm believer that I am a better shot with a GLOCK.”

With its long and rich history, St. Johns County and St. Augustine has played a heavy role in all of America’s early conflicts, and its continued vibrancy is reflected by its diverse and tightly knit community. Meanwhile, the St. Johns Sheriff’s Office continues to perform the role it was first tasked with nearly 200 years ago: —keeping the peace and protecting both visitors and the people who call northern Florida home. In the course of their duties, the great majority of the county’s officers utilize the weapon that they have personally selected as the best protection weapon they can carry, whether in a patrol car, a four-wheeler, a boat or on a SWAT callout: the GLOCK autopistol.