A Florida homeowner used a firearm to protect himself and his son from three intruders.

According to WPTV (via GunsSaveLives.net), the Palm Beach County Sheriff’s Office says three men descended on the home at Galleria Street in Wellington, looking for the homeowner’s son. They began threatening the son, and the homeowner came out and got into a verbal dispute with the men.

One of the suspects pulled out a knife and threatened the homeowner. The homeowner pulled out his gun and opened fire, hitting that suspect, the PBCSO confirmed.

As WPTV reports, the three men fled to West Palms Hospital, where they were promptly taken into custody. The wounded suspect was then transported to St. Mary’s Hospital with non-life-threatening injuries.

The three suspects are expected to face charges. 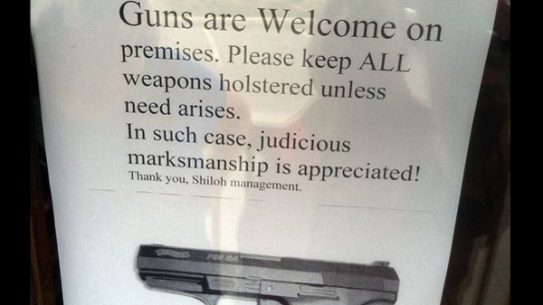 While larger chains continue to enforce a strict no-gun policy, a growing number of...