Diamondback’s DB FS Nine, the company’s first full-sized 9mm pistol, offers shooters a simple-to-use platform that’s reliable, accurate and easy to handle. The double-stack DB FS Nine accommodates 15+1 rounds of 9mm, and under the dust cover is ample space for attaching lights and/or lasers (such as the Viridian C5L, shown).

There has never been a better time to be a pistol buyer. With the huge increase in sales and use over the last few years, new pistols are introduced almost as fast as computers used to be. Improvements on current designs are a regular event. Increased concealed carry among citizens has led to the production of smaller, lighter and less costly pistols. Despite this, a very strong market remains for full-sized pistols, especially in 9mm.

Pocket pistols are fine, they have their place and are incredibly convenient, but they are often less than optimal for training purposes. It remains an issue for new shooters attending many pistol classes. Smaller pistols generally have more recoil, are more difficult to shoot accurately, and are not well suited to standard drills and exercises.

The best pistol for most new shooters for use at a new class is a full-sized 9mm with a reasonable capacity and complete reliability. The fewer the controls the better. A grip that is comfortable and fits your hand is critical. You want to focus on the very basics of application, not spend all your time working on manipulation of external controls. The less you load, and the more you can focus on grip and proper aiming and sighting, the better off you are. The simpler the pistol, the easier such things go.

A decades-old 1911 aficionado, I nevertheless recognize that for most beginners a “slick” striker-fired pistol remains the best. Learn basic marksmanship, application and manipulation skills first, then move to pistols with manual safeties, de-cockers or more complicated triggers. Everything you do with your simply designed pistol will transfer to any other. Keeping it simple is critical, and Diamondback Firearms has just come out with a pistol in which simplicity of operation is the essential characteristic.

Diamondback Firearms has been building compact and subcompact pistols in .380 ACP and 9mm since 2009. Known for a smooth and crisp trigger, especially in such small pistols, the DB380 and DB9 pistols are favorites among concealed-carry holders. While the company also manufactures an AR pistol (the DB15), its standard pistols are designed for deep concealment—that is, until now.

Diamondback’s latest pistol, the DB FS Nine, is a full-sized, 15+1 9mm pistol packing a ton of features at a reasonable price. The grip is contoured with a “beavertail,” keeping things solid and preventing slide bite, especially for those with large hands. The trigger is smooth with a positive reset measuring at 5.5 pounds. Fixed three-dot sights provide for quick target acquisition. Cocking serrations at the front and rear facilitate reloads and positive control no matter the conditions. A full Mil-Std-1913 Picatinny rail allows for use of lights and other accessories. With a 4.75-inch chrome-moly barrel and a 6.25-inch sight radius, it is easy to shoot accurately. The pistol’s double-stack magazines hold 15 rounds and feature a well-contoured magazine base that is easy to insert and remove.

Striker-fired pistols do not always fit my hands well. My large hands tend to get compressed at the frontstrap, and slide bite is the norm with many. So when pistols like the FS Nine show up for testing, skepticism is the rule. Removing it from its case, it was a pleasant surprise. The grip has more in common with my long-proven hammer-fired weapons than any striker-fired pistol used to date. The few friends and colleagues to whom I handed the gun all indicated it was very comfortable. My hand did not sit as high to the bore, but the beavertail looked to prevent slide bite and promote a more traditional grip angle. Cutting the frontstrap high and relieving the triggerguard provided plenty of room for my hands.
The gun’s controls are similar to those of a Glock, with a single slide stop on the left side. The magazine release is easily accessed.

Indentations at the bottom of the mag well allow you to “pull” on the magazine base to ensure it is properly seated. The square triggerguard sits behind a full-length rail with multiple slots. Every light in my inventory went on easily, including several SureFire lights, some Streamlights and a few others. The Melonited, Glock-style sights are made OEM by Ameriglo—a nice touch. The front is bolted on, while the rear uses a dovetail, and both have prominent white dots.

The FS Nine features aggressive serrations at both the front and rear. An external extractor extends about an inch along the slide. There is a loaded-chamber indicator on top of the slide (with the usual hole allowing you to see the brass) as well as a cocking indicator at the rear. When cocked, the striker extends outside the rear of the frame and can be both seen and felt. A drop safety “toggle” is present on the trigger and presses smoothly with a tactile and audible reset. The trigger pull measured 5.7 pounds and was predictable with adequate take-up and little overtravel.

For enhanced durability, the slide, barrel and sights are finished in Melonite, which not only prevents rust, but also surface-hardens the parts, extending service life.

I did most of my range testing using Safariland holsters. For use with the SureFire X300 or Streamlight TLR-1, I used a Model 6004 Tactical. The DB FS Nine fit the holster without issue when a light was attached, but was a bit loose otherwise.

Range testing started with simple drills from the holster. It was smooth to draw and worked really well with either the SureFire X300 or Streamlight TLR-1 from the Safariland Model 6004 on my thigh. It never missed a beat with either light, even with +P ammunition. Ejection was consistent with full-power ammunition but proved a bit erratic with the practice stuff. It never failed to either extract or eject, but brass would occasionally come straight back onto my hat—a bit annoying, but it always worked. Accuracy on the move with multiple shots was great, with most everything landing inside a 6-inch circle. The FS Nine shoots really soft, especially with the 115-grain Black Hills practice ammunition. Even when using DoubleTap’s +P ammunition, it remained very controllable. Purely subjective, but it seemed to shoot a bit softer than most striker-fired polymer pistols I’ve tested.

Accuracy testing proved solid, as everything fell inside 3 inches at 25 yards, with Federal’s well-proven 124-grain +P providing the best group, at 2 inches. Shooting off-hand at 25 yards, it was pretty easy to stay on the 6-inch steel, even with practice ammunition.

Moving to rapid fire, the FS Nine was a ton of fun to shoot. Starting with reload drills, the magazines inserted easily and locked into place nicely. These magazines are metal and bear a strong resemblance to my Sig P226 magazines. Loading the last few rounds was stiff but possible with a bit of effort. Use of the slide stop or “slingshot” method brought the slide home each time. Accessing the magazine release was possible for me without shifting my hand on the grip. Especially for the first 100 rounds or so, the ejection pattern continued to be a bit erratic on rapid-fire strings using low-powered ammunition. It got better with trigger time and full-power loads, but it was noticeable on occasion.

Shooting for speed, the FS Nine worked well. Split times were similar to other factory striker-fired handguns. Running through typical competition-shooting drills, it purred along with plenty of accuracy and reliability. Best of all for me, there was not a single instance of slide bite. For someone looking to compete in local matches, the FS Nine looks to be a very affordable and workable pistol with which to get started. 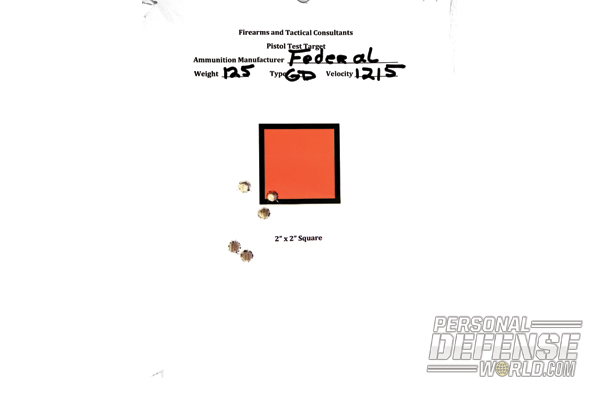 At the end of the day, the FS Nine worked really well and was a ton of fun to shoot. Function was excellent with no malfunctions. While the ejection pattern was a bit off for the first few hundred rounds, the same thing happens with other, similarly built pistols. And, it seemed to all but disappear by round 200 or so. It was never an issue with the full-power loads.

If you are looking for a solid range pistol, or one to take to a training class or local competition, the DB FS Nine is a good gun to consider. It fits well, shoots reliably and holds 15+1 rounds of ammunition. Accuracy was good, about where most factory pistols fall these days. Equipped with all the internal safeties, a drop safety and a loaded-chamber indicator, it fits most requirements. Its melonite finish means it should hold up under harsh conditions. If you are in need of a reliable and simple-to-use pistol that will serve well for self-defense, training or local competition, then make sure you give the FS Nine a hard look.