by Doug Larson
in Exclusives, Guns
0

Specimens of the StG.44 are very difficult for collectors to obtain since only about 440,000 units were made before Germany was defeated. Consequently, real StG. 44s are expensive, and as with any firearm capable of automatic fire, can only be legally owned by civilians who have obtained clearance from BATFE. However, German Sport Guns manufactures the semi-auto StG 44 chambered in .22 LR, which is imported by American Tactical.

When first viewed, GSG-StG44’s screams of authenticity. It comes in a neatly made cardboard box, which looks like a wooden box that reminds one of a no-frills military shipping container. The crate even has rope handles on each end and, when opened, reveals the securely packed gun. Included in the package are a 25-round polymer magazine, a chamber brush, safety lock and an owner’s manual.

The gun is true in appearance to an original StG.44, with the only discrepancies being the chambering and perhaps minor differences due to the impossibility of building one gun that incorporates all the design changes made during the production of the real StG.44. 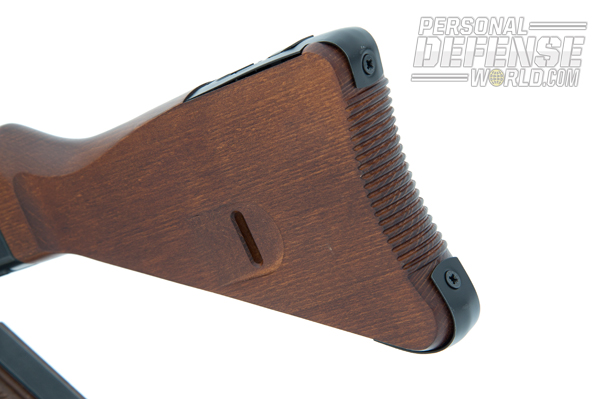 The wooden buttstock is nicely finished with a dark stain and has a metal strap protecting the toe. The heel is also protected with a metal strap that includes a trap door, providing access to a recess for parts storage or a cleaning kit. Just like the original, a slot is milled into the buttstock for the attachment of a sling.

The pistol grip panels are made of plastic, which is true to one variation of the original StG.44. Both sides are horizontally grooved for slip resistance and are fairly thick, giving the pistol grip a large, hand-filling circumference. The trigger is a two-stage affair with a long take-up and break after applying about 9 pounds of pressure. It is difficult to ascertain when the trigger actually resets on the return stroke, but so what? This is not a precision or self-defense carbine. It’s a fun gun.

The safety selector is rotated up for “fire” and down for “safe,” just like the original. However, the semi-round and checkered push button located above the safety cannot be pushed in; it is cosmetic only. On the original StG.44 it served as the selector for semi- or full-auto fire. Otherwise, the contours on both the left and right side of the lower receiver are true to the original and reflect the design trends of the time. 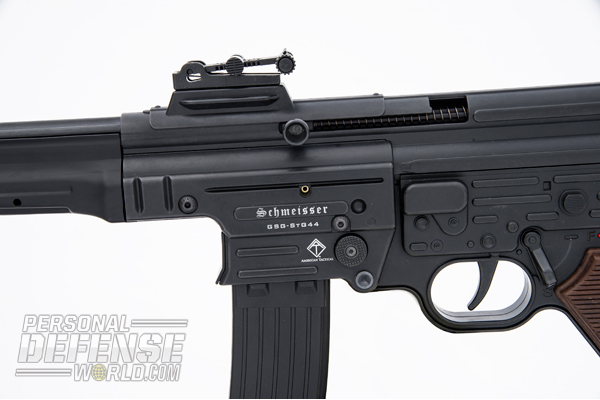 The upper receiver also looks like that of a real StG.44 with any exceptions being due to changes in the design during various phases of production. Of note is that both the upper and lower receivers are made from stamped sheet metal parts, which was a fairly radical departure in the late 1930s and early 1940s, especially for a country like Germany that took great pride in precision machining of mechanical parts from solid blocks of metal. The sheet metal design streamlined production and reduced costs.

The upper receiver houses the magazine well that is generously sized to accept the 25-round magazine. The magazine-release button is a large round, checkered button located on the left side. It is pressed with the thumb of the left hand while the same hand grips the magazine and pulls it down and away from the receiver. The magazine takes some time to load just because .22 LR cartridges are small and not easily handled, especially by those with large fingers. However, the magazine has a stud on the right side that is used to compress the spring, which makes dropping cartridges into the magazine fairly easy. 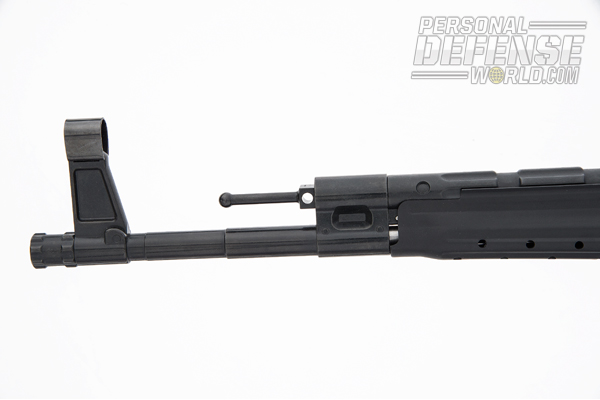 The handguard is sheet metal with four ventilation holes on the left side and five on the right, as well as eight vents aligned in a zigzag pattern on the bottom. The .22 LR replica’s handguard won’t get very hot under sustained fire, though I imagine the originals chambered in 7.92x33mm would. A sling swivel is attached to the right side of the handguard and barrel.

In the original StG.44, the gas piston and cylinder are located above the barrel, making it necessary to elevate the sight line higher above the bore than on a conventional rifle. The front sight base on the replica is about 2 inches high and supports the front post, which is surrounded by a protective hood. The post is pointed at the top like an inverted “V,” while the rear notch is V-shaped with the point at the bottom making a fairly useful sight picture. The tangent rear sight is adjustable for windage, but the only elevation adjustment is to move the crossbar along the sight leaf, which is marked for ranges from 100 meters to a very optimistic 1,000 meters, no doubt to keep this replica as close to the original design as possible.

During testing, the gun ran well with all of the loads available. There was only one failure to fully chamber a round, which cannot be attributed to any design flaw or error in the manufacture of the gun. There are a lot of variations in .22 LR ammunition, and such ammunition is notorious for causing malfunctions, so it was probably just due to the ammunition and not the gun.

Testing at the bench for accuracy proved the gun was pretty accurate, printing groups of about 2.5 inches on average at 50 yards. Given the iron sights, that’s not bad considering the age of this shooter’s eyes. A person with better eyesight mayhave been able to get better results.

While .22 LR ammunition is becoming more available than it was a year ago, shortages still exist. Hopefully that problem will disappear in the not too distant future, so if you would like to own a replica of the historically significant Sturmgewehr, don’t wait. It’s a fun and interesting gun to shoot.