"Despite testing with three different ammunition types, with bullet weights ranging from 165 to 180 grains, the rifle functioned flawlessly with everything on the factory setting."

Having handled AR-15 type rifles in several competition disciplines and spent two decades of military service with the M16 series, the Noreen Firearms BN36 seemed long. Most of my shooting in this platform was with the more standard and diminutive issued 5.56mm NATO or commercial .223. Even compared to 7.62mm NATO versions, such as the currently issued M110, the BN36 seemed beastly. Of course, Noreen is far from being yet another AR-15 vendor.

Despite a decades-long decline in crime, manufactured responses by a vocal political minority to a smattering of violent statistical anomalies backfired. They called for bans, or at least strict control, on the inanimate objects used by the perpetrators. The American people instead responded with a buying frenzy, leading some to label our current president the “Gun Salesman of the Year.”

Due to this demand, it seems everyone with a combo tool, torque wrench, vise blocks and a bench vise is offering an AR-15 for sale. There is a small number of actual AR-15 “chip makers” (manufacturers making parts from scratch), and most of these AR-15 companies are assembling components sourced elsewhere. Eugene Stoner’s masterpiece—which is the longest serving service rifle in U.S. military history, and the dominating platform for accuracy-intense Service Rifle events and speed-oriented 3 Gun—is relatively straightforward to build. As one gunsmith friend involved in High Power competition puts it, building a competitive National Match M14 is an exercise in the gunsmith’s art, and building a competitive National Match AR-15 is Erector Set assembly.

Given that most makers aren’t actually making their own parts, most AR-15 companies are limited to assembling other company’s components. Like Ford’s Model T, you can have any option you want as long as it’s 5.56mm NATO, or 7.62mm NATO if they offer that variant. Most deviations from these chamberings are cartridges using 5.56mm NATO or 7.62mm NATO as the parent case. This keeps the bolt and action nearly identical with the only major change being the particular reamer used to cut chambers in the rifled blanks. Noreen Firearms is one of the few companies offering something truly different.

Peter Noreen has been gunsmithing for nearly three decades, having made his mark custom-building dangerous game rifles based on scaled-up, pre-’64 Model 70 Winchester actions. Mentorship of his son, Phil, began in the family-owned shop and covered rifle building from the ground up. Both father and son were keenly interested in ultra-long-range shooting (beyond 1,000 yards), which led to the development of their Ultra Long Range Rifle in 2007. Featuring a custom single-shot bolt action and a collapsible stock of their own design, this 32-pound beast is triggered with an adjustable Timney unit and chambered in .50 BMG, .416 Barrett, .408 CheyTac and .338 Lapua. This would evolve into a self-loader in 2010, the Bad News Ultra Long Range Semi-Automatic Rifle, an external piston driven, side-charged semi-automatic available in .338 Lapua, .338 Norma and .300 Win Mag. The Bad News was the first AR-15 chambered in such large cartridges and has been praised in various tactical circles. The BN36 continued this trend, adapting a more standard stationary internal piston AR platform (sometimes referred to as “direct impingement”) for standard-length cartridges such as .30-06 Springfield, .270 Win and .25-06 Rem. The company makes most of the components for its rifles in house, manufacturing the upper and lower receivers, making a muzzle brake of their own design and turning the rifled blanks. About 80 percent of Noreen’s employees are military veterans.

Anyone ever taught to handle an AR-15 will instantly be familiar with the BN36 manual of arms. The safety, trigger, takedown pins, bolt catch and magazine release all work the same. The only difference is the fixed side-charging handle, instead of a more normal handle at the receiver’s rear. Clearing and disassembly procedures are the same; the parts are just bigger.

Cleaning is also the same. Ignore your drill sergeant and listen to Noreen. Avoid harsh cleaning treatment, specifically “never use a wire brush or any type of abrasive” and to stick with Cleaner, Lubricant Preservative (CLP.) Wipe everything down and keep the moving parts lubricated.

The owner’s manual specifically advises against using any ammunition made before 1990, with the reason being that older ammunition can cause pressures above specifications and can cause damage. While working with thousands of mobilizing soldiers at Fort Hood, we scrounged some .50 BMG stores headstamped with 1940s dates to feed Ma Deuce on the Trapnell range. The .30-06 is older still, quickly approaching the century mark, and it’s possible to come across cartridges many decades old. Because of this there can be a breakdown of propellant in long-term storage. Even slight moisture inside the case can cause corrosion, rendering the propellant into a glue-like substance and causing higher than normal pressure. While this is normally not a problem, Noreen prefers to avoid the issue altogether in their precision rifles, hence the warning.

Noreen rifles are chambered in cartridges much more powerful than typical AR-15s and will likely be used with long-range performance ammunition with differing pressures at the gas port. This can cause a timing issue such as the bolt opening too fast, leaving the cartridge case swollen and attempting primary extraction too soon. This can also leave pressure signs, such as marred brass, cratered or flattened primers, or ruptured cases. With a Noreen rifle, this can be fixed by adjusting the gas flow. Closing the gas port (turning it clockwise) slows the gas flow and can ease harsh felt recoil, stove piping or an extractor tearing the case rim. On the other hand, if the bolt is not traveling far enough back to chamber the next round, there is not enough gas in the system and you will need to open the gas port up more by turning it counter-clockwise. When new, the tight-fitting parts may have more friction while breaking in and may require more gas as well.

Changing ammunition can also require an adjustment. Try the new load with the current setting and then adjust accordingly. When the load and gas setting is finalized, non-permanent (blue) Loctite on the valve screw keeps it set. It is also possible to shut the valve completely if you want to cycle the rifle as a straight-pull bolt action. 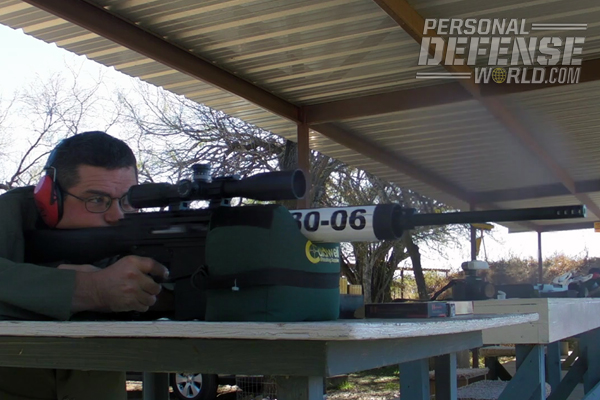 Noreen is known for long-range shooting, and the BN36 continues to reinforce this. Stoner’s internal piston gas system, originally designed to save weight by reducing needed parts, has proven to be ideal for precision self-loaders as well. Shooters in the know consider quality AR-15s to be gas-operated bolt actions, and the platform dominates Service Rifle competition so much that the few remaining M14/M1A Across The Course shooters do so only for nostalgia, not to win.

While nobody will confuse the standard trigger for a Geissele, it is a respectable two-stage and breaks clean. A match trigger is available as an option. Given the Picatinny rail atop the upper receiver, setting up an optic was as simple as a few twists of the torque wrench. I happened to have a proven-reliable SWFA SS 10×42-30mm scope with rings lying around, and a 10-power optic with a mil-dot reticle also seemed appropriate. The adjustable gas system proved to be a non-issue. Despite testing with three different ammunition types, with bullet weights ranging from 165 to 180 grains, the rifle functioned flawlessly with everything on the factory setting.

I violated my personal policy and opted to test from the bench. While my team coaches and fellow shooters are likely snickering, I wanted a baseline test of precision and wasn’t establishing zeroes or collecting data during my test. Even under a covered firing point, the muzzle brake rendered only moderate blast and did a great job soaking up recoil, leaving the reticle hanging nicely at point of aim. Shooting at distance with an optic of sufficient power and quality, a shooter could likely see their own trace. 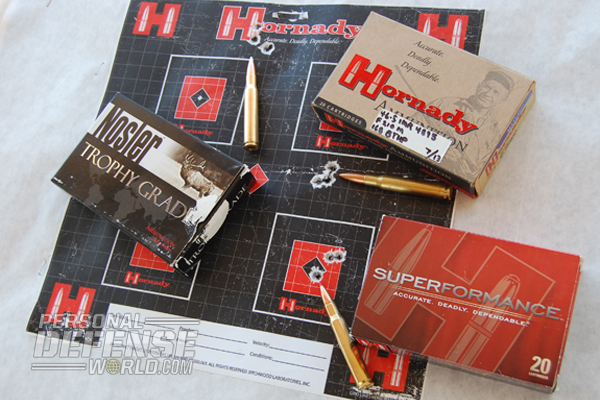 On the precision end, the BN36 is one of the most accurate AR-15s I’ve used to date. Out of the box and not yet broken in, the rifle delivered an easy 1-MOA average. I tested it with three types of premium .30-06 ammunition: Nosler Trophy Grade 165-grain AccuBond, Hornady Superformance 180-grain SST, and a M1 National Match handload consisting of a 168-grain Sierra MatchKing BTHP on top of 46.5 grains of IMR 4895 and a Federal #210M Gold Medal Match large rifle primer inside Hornady brass.

Beauty is in the eye of the beholder, but measured performance is irrefutable. The BN36 delivers beautiful performance as beastly as its appearance indicates. The gas system proved completely reliable, the muzzle brake softened recoil noticeably, and downrange performance was quite good. As Noreen’s domain name suggests, the BN36 is well suited for long range.