Although Armscor (the parent company of Rock Island Armory) has been manufacturing firearms for some 60 years, it managed a truly rare feat in 2011—it brought to market something new on the M1911 platform. Packaged in a high-capacity semi-auto, the company’s bottleneck .22 TCM cartridge shoehorned 2,000+ feet-per-second (fps) performance inside the envelope of a traditional handgun that held 17+1 of the soft-shooting, fast-moving bullets.

Short for “Tuason/Craig Magnum,” the cartridge bears the name of the Tuason family that owns Armscor, as well as Fred Craig, a design consultant who had been working with them. No stranger to the high-cap M1911 platform, Craig designed the Fantom Fighter, a high-capacity compact .38 Super built in the 1990s based on a Caspian racegun frame. Wanting to create a handgun-based cartridge with high energy and low recoil that would function in a high-capacity pistol, Craig took advantage of the resources that come from working with Armscor (a company that’s also a significant ammunition manufacturer) to create the TCM. While he began experimenting with necking down the smaller .30 Carbine cartridge, he ultimately arrived at a cartridge design that resembles a shortened .223 rifle round and is designed to maximize case capacity and velocity. While much of the factory-loaded Armscor ammunition I’ve shot hovers around a cool 2,000 fps or so, some loads clock up to 2,300 fps, which is simply blistering.

Unfortunately, ammunition availability has been the downfall of many a fascinating pistol—the short-lived .41 AE, and the even shorter-lived 9mm AE, for example—and that makes buying a pistol in a new caliber something of a risk. Who knows if you’ll be able to find ammo for it in 10 years? Take also the .224 Boz, which was very similar conceptually to the .22 TCM, but basically just never made it to market in the civilian world in any quantity at all. Cleverly anticipating this, when Rock Island released its high-capacity .22 TCM, it made the decision that it would come standard with two barrels, one in .22 TCM and one in the ubiquitous 9mm.

In its current form, the TCM comes packaged in a black plastic case with foam cutouts to hold the gun, magazine and spare barrel, along with a manual and a pair of the obligatory fired casings. In addition to the barrel, it also comes with a recoil spring calibrated for the round it’s to be used with—7 pounds for .22 TCM and 12 pounds for 9mm.

Since my first pistol was delivered in only .22 TCM, I wound up with a second test gun that had both barrels. Both guns are identical, except for the rear sight. As usual, we’ll start with the top of the pistol and work our way down.

Business-like in appearance, the TCM is a Para-pattern, high-capacity M1911 that comes in a matte black, Parkerized finish. Only the chamber area of the barrel hood is silver (but even that was black on the first gun). Of the two barrels that come with the gun, you’ll notice that the 9mm barrel is basically the same diameter through its length, but the .22 TCM barrel is narrowed in the middle between the chamber and muzzle area. While it makes it easy to tell the barrels apart at a glance, the reason for this feature is the reduction of weight.

Since the barrel is locked to the slide at the moment of ignition (as with all locked-breech designs), the recoil impulse of the cartridge has to overcome the combined weight of the slide and barrel in order for the slide to move backwards, opening up the action to eject the spent casing and load a fresh cartridge. The .22 TCM has less recoil than the 9mm, so the reduction in weight from removing material from the barrel reduces the resistance that has to be overcome in order for the slide to cycle. Also seen on M1911s in 9mm, it’s a functional feature well applied and clearly one of the reasons the gun functions so well.

The slide, which has a narrow flattop machined down its length for a nice aesthetic effect, has a plain black, dovetail-mounted front sight. The rear sight on the earlier gun is an adjustable Bo-Mar pattern with a broad, flat, serrated rear face. While the later pistol’s adjustable white-dot sight mimics some of the lines of the Novak LoMount sight, it is not one, and it does not use a standard dovetail cut for those who may wish to replace it with a genuine Novak sight.

The ejection port is lowered and flared straight back for a distinctive streamlined look, and the slide uses the classic vertical GI-style serrations. The traditional stirrup cut on the slide has been cut with a ball mill, a feature commonly found on custom .45s as well as on some of the earliest M1911 pistols. Both the original bushing and recoil spring plug systems have been retained, which I consider a plus as I’m no fan of full-length guide rods, and the bottom edge of the slide has been machined in a deep bevel to avoid cutting the shooter’s hand. Most of the edges of the gun have been gently melted, and while I found some corners unbeveled when I looked for them, my hands never found them during the 1,000-plus rounds I fired through both guns.

The lines on the frame (including the smooth frontstrap) are similarly well rounded, and while there’s no doubt the pistol’s frame is bigger than a single-stack M1911’s, it doesn’t feel overly large in the hand. Controls consist of a standard-size magazine release, slide stop and thumb safety as well as a skeletonized trigger, a Commander-style hammer and an upswept beavertail grip safety with the now customary “speed bump” at the bottom of the contact pad. While there was a little looseness in the fit on the beavertail on the first test gun, the second one was much better. The triggers on both pistols were uniformly superb, breaking crisply with zero discernable creep. This is the trigger you expect on much more expensive pistols but often don’t find.

The mainspring housings are flat and checkered, and the magazine wells are beveled. While more important on a single-stack pistol than a double-stack, where the bevel really is on the magazine itself, it’s still a nice feature to have and one we’ve grown to expect. All said, it’s a well-put-together package with the features typical of what we’re accustomed to seeing on a typical modern production M1911 pistol.

While the gun comes with two barrels, it only has one bushing. Since the bushing is a wear item, I prefer to have one on each barrel if I’m going to be swapping them in and out. That’s something that I have on my personal multi-caliber M1911s, and it’s something I’d likely add to this pistol. As it is, to swap from the .22 TCM to 9mm, you fieldstrip the gun, removing the barrel, bushing and recoil spring on its guide. Take the bushing from the TCM barrel, slip the bushing onto the 9mm barrel, then install it and the heavier recoil spring (also on its own guide), and reassemble. Changing back from 9mm to TCM works the same way—just don’t mix up the recoil springs.

By best count, I fired something like 850 rounds of .22 TCM through both pistols, never cleaning either. I have yet to see a malfunction of any kind using .22 TCM. With the second pistol, I fired an additional 400 rounds of 9mm. This produced a grand total of one stovepipe until the final range session, where I used a mix of boutique copper hollow-point (HP) ammunition and aftermarket magazines, both of which were determined not to function. With factory magazines, and with other ammunition (including traditional HPs), there was only the single malfunction in 9mm.

Accuracy was also surprising. I tend to shoot pistols at long distance, and I quickly realized that the first test gun had an uncanny habit of just not missing. When I clamped it into the Ransom Rest, I found out why—it was shooting about 1.5-inch groups at 25 yards. This is outstanding accuracy for a semi-auto. In my experience testing M1911s, I rarely see a gun that can average that group size that retails for less than $3,000, and never below $1,000. To put that in perspective, the TCM with both barrels goes for less than $700. My favorite Ransom Rest group with the first gun? Just 5 inches at 100 yards.

Groups opened up a little bit with the second gun, averaging a little over 2.5 inches at 25 yards in 9mm and just under 3 inches in .22 TCM, which is still very good accuracy. Shooting by hand, I had no problem hitting my 4.625-inch steel plate at 40 yards pretty much every shot with the 9mm. It was almost monotonous.

Recoil with the TCM is almost nonexistent. The gun has a considerable muzzle flash—if you’re picturing a large, round, orange/yellow ball of fire, you’ve pretty much got it—but has a very soft recoil impulse and very little muzzle flip. The gun seems to be made for double-taps as it stays on target quite well at speed. As you’d expect with the profound difference in bullet weight and speed, the .22 TCM and 9mm hit different places on the target—the second gun seemed to be zeroed for 9mm—so there’s a reason that rear sight is adjustable. Crank it over as necessary, or just learn where to hold, which is what I did. 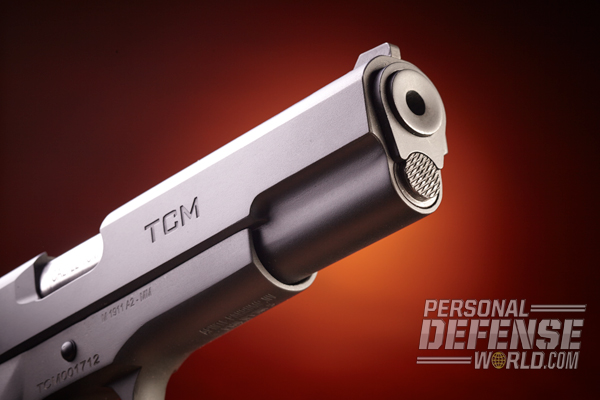 With the .22 TCM, Rock Island Armory has created an entirely new paradigm for the iconic M1911—high velocity, high capacity and low recoil—and done it in a package with exceptional performance. They’ve also done it at an impressively low price, and the M1911 snob in me wants to say this gun has no right to be this good at this price. The rest of me is just glad that it is.