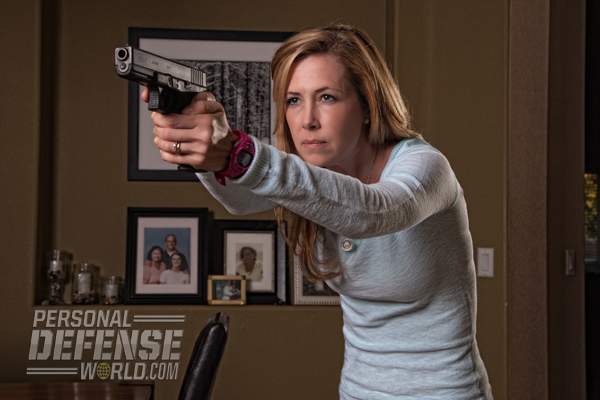 911 audio has surfaced of an Arizona homeowner shooting an intruder attempting to assault her.

According to the Arizona Republic, the 47-year-old Phoenix homeowner was at her home near 67th Avenue and Indian School Road on May 6, when she heard somebody breaking into her home.

She immediately called 911, grabbed her firearm and hid in the bathroom. While she was on the phone with the emergency dispatcher, the intruder found her and began attacking. During the struggle, the woman turned her gun on the intruder and opened fire, hitting him once.

The woman, a widow, was taught how to use the .38-caliber handgun by her late husband.

The suspect, identified as Michael Lewis, 20, was arraigned in June after he spent a month in the hospital recovering from the gunshot, the Arizona Republic reported. He pled guilty to second-degree burglary and aggravated assault. He is scheduled to be sentenced on Sept. 15.

Listen to the 911 call above, or read the full transcript below, via the Arizona Republic.

Dispatcher: Phoenix 911 where is your emergency? Hello? 911.

Homeowner: (Garbled)…please help me. Somebody is trying to get into my house.

Dispatcher: Okay, what are they doing?

Dispatcher: Okay, stay on the line with me, I’ve already got officers started. Do not hang up. Okay?

Homeowner: (Garbled)…I have a gun in my hands. I’m terrified.

Dispatcher: Okay. I’ve already got officers already on the way. I’m going to keep you on the phone until officers get there, okay? Just…

Dispatcher: …the back gate now?

Homeowner: I think they’re in the back now.

Homeowner: Somebody is in the back on my porch.

Dispatcher: Somebody is on your porch?

Dispatcher: Ma’am, they’re coming out there as fast as they can. Can you see anybody?

Dispatcher: I’m not asking you to look but, but did you see anyone? Like, are there any open windows?

Homeowner: No but somebody is banging on my arcadia door.

Dispatcher: Okay. Are you expecting anybody?

Homeowner: No. There’s nobody (garbled) outside in my driveway (garbled).

Dispatcher: Like I said, I want to keep you on the phone until officers get there, okay? Do not hang up. I’ve got a lot of officers…(garbled).

Homeowner: They just broke in.

Dispatcher: It just, they, it just broke?

Dispatcher: Okay, yes, I’ve got them coming out there. They’re coming out as fast as they can. Have you heard any voices?

Dispatcher: Okay. Tell me if you see them. Tell me what they look like, how many of them are armed, whether they’re men or women, women….

Homeowner: I just saw one.

Dispatcher: Just saw one? Okay. Did you see a person or a shadow of a person?

Homeowner: They’re breaking out my window.

Dispatcher: Are you in your bedroom or?

Dispatchers: Yes. They’re coming out as fast as they can I’ve got a lot of officers responding. Is there an alley behind your house?

Dispatcher: You back up to the canal, right?

Dispatcher: Yes. Okay. You don’t need to answer anything. I’m just going to stay on the line with you. Okay?

Homeowner: Did you think you could beat me half to death?

Homeowner: What did you come in my house for?

Homeowner: I shot him.

Dispatcher: You shot him?

Dispatcher: Okay! I’ve got them, I’ve got everybody coming out for help. Okay?

Homeowner: Don’t get up or I’ll shoot your (expletive) again!

Homeowner: In my house. He’s in my bathroom.

Dispatcher: No, no, where in his body?

Dispatcher: Where in his body did you shoot him?

Dispatcher: Where in his body?

Homeowner: He’s laying half in the bathroom and half in my hallway. Where is his body?

Dispatcher: Okay. Okay, do you recognize him? Is he somebody….

Homeowner: No. I don’t recognize him.

Dispatcher: Okay, so he came into the bathroom where you were?

Homeowner: I’m in the front bathroom. (To Lewis) I said don’t move!

Dispatcher: What is he saying?

Homeowner: He said he thought the house was abandoned. (To Lewis) Abandoned? (Garbled)…with the car and locked gates and yes.

Homeowner: You bet you’re sorry you nasty thing. You tried to get in doors. I heard you out there and….

Homeowner: Because why should I unlock the door when you’re rattling and beating on everything and trying to climb my fence?

Dispatcher: Yes there’s no need to, the, the officers are going to be there in a few, just about every officer on that side of town is responding out there, okay?

Homeowner: Please get somebody here.

Dispatcher: They’re coming out as fast as they can. Are you hurt at all?

Dispatcher: He was, who was hitting you?

Homeowner: He was beating on me when he found out I was in here. That’s why I dropped the phone and I almost dropped the gun but I ended up shooting.

Dispatcher: I’ve got them all coming out as fast as they can. They’re arriving in the area now, okay?

Homeowner: I’m not going to walk over the top of this guy.

Dispatcher: No, no. I’m not going to want you to leave the bathroom. I’m going to have them come to you but you’re going to have to put down the gun, not near him….

Dispatcher: I’m going to wait until you see the officers before I disconnect, okay? I’m showing they are there. They should be coming inside.

Homeowner: Come on back, I’ve put the gun down. 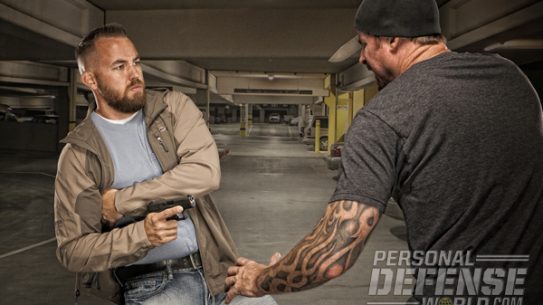 Ultra-compact “baby Glocks” deliver reliable backup protection from .380 to .45 to handle any...