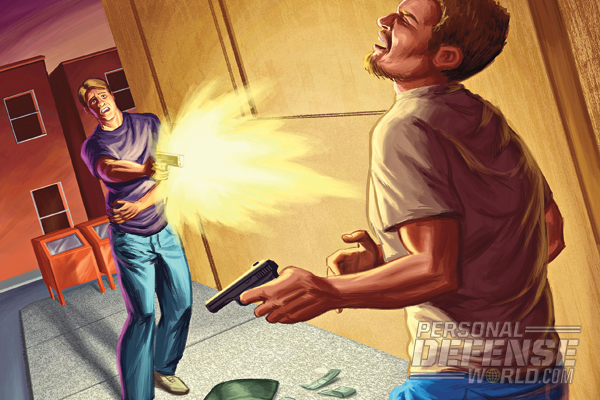 Shot in the side, the would-be victim drew his Glock 17 and replied with two rounds of 9mm, decisively dropping his murderous assailant.
Comment(s)

I have been operating a poolroom in the South End district in Charlotte, North Carolina for 30 years. This is south of downtown Charlotte, in a very upscale area. In 2007, some of my friends’ businesses were the victims of a gang of serial robbers. Concerned, I decided to get a concealed carry permit. Since by all accounts these three were all armed, I started carrying a full-capacity Glock 17.

On December 1, 2007, I closed the bar earlier than usual. As I left I saw three guys in a car going by slow. I had my door open when they pulled up to ask directions. My G17 was in my hand, along with the company’s black money bag.

One punk appeared on the sidewalk 5 yards away and said, ”Drop the bag.” I turned around and he was standing there holding his pistol upside down. He fired a shot that hit me in the side. I raised the bag and the Glock and double-tapped him with +P jacketed hollow-point ammo. He dropped in his tracks. Then shots started coming from the car.

I was hit at the top of my left leg; it was very close to the femoral artery. I jumped behind my door and returned fire into the car, trying to flush the other two out for a clean shot. I had 18 rounds and was happy to have a fully loaded mag. When their shots went silent, I locked my door and went upstairs to call for help.

These guys were repeat offenders. The 25-year-old that shot first got 12 years with no parole. My round severed his spine. He is paralyzed from the waist down and has a colostomy bag.

The things to learn from this encounter are to use quality personal-defense ammo and to have a plan. There have been no serial robberies in Charlotte since. —ES, NC

After hearing of a couple of robberies in similar stores, I went to a local gun store, got a permit and took some lessons. To keep it simple, I bought a Glock 17 in 9mm. I keep it on me while working and under the register in a quick-access gun safe when I’m not there.

One night, a guy walked in looking agitated. After circling the store a few times, he approached the cash register with a candy bar and laid it on the counter. What I hadn’t noticed was that he was carrying a bat behind his leg. When I rung up his purchase, he raised the bat and said he wanted all the money.

Every time I tried to speak he would swing the bat in my direction and destroy something. He then told me that if I didn’t cooperate, he’d use the bat on me. Finally, he started to swing the bat at me while coming around the counter toward me. It was clear to me that he was going to beat me with the bat. Thankfully, I was wearing my Glock.

As I tried to retreat, I drew the weapon and pointed it at him. Even the sight of the weapon didn’t slow him down. I also noticed something shiny in his other hand, which now became clear that it was a knife. There was no way I was going to let this guy beat me and cut me up. I squeezed off four rounds at my attacker. As the rounds struck him, at first he didn’t seem to notice, but finally he stopped and dropped to his knees. I kept my gun trained on him as I called 911. The police and ambulance were there pretty quickly, and my attacker was taken to the hospital. The police cleared me of the shooting and charged my attacker with a laundry list of crimes. He was judged mentally incompetent, so he was sentenced to several years in a psychiatric facility. —DA, WI

Since CCW finally became legal in North Carolina I have made it a practice to always carry a concealed handgun whenever I intend to be away from home.

Early one May morning, I filled my truck with baskets of plastic containers, steel and aluminum cans, bottles and bundled newspapers and drove to the local recycling center, which was essentially a vacant lot on the edge of town.

I was depositing steel cans into a dumpster when a voice behind me asked, “Hey mister, where are you going when you leave here?”

Turning around, I was confronted by a rather large and scraggly looking young man. I asked him why, and he told me, “I need to get to the next town in a hurry.”

Attempting to sound as friendly as possible, I informed him that I could not help him and wished him a good day. As I headed back to my truck he ran around me, interposed himself between myself and the open door and in threatening voice said, “I want you to drive me there now!” With my keys to the truck still in the ignition, I realized I was about to be the victim of a carjacking, if not an attack upon my person.

I then pulled back the light windbreaker I was wearing, exposing a 3-inch-barreled S&W Model 64 revolver. Placing my hand on the grip, I told him I could not help him and that he had better move on.

Glaring at me while spewing a stream of invectives he backed away, turned and then ran off.

I drove into town, found a police officer, and explained what happened. After taking a report, the officer told me, “You’re lucky you were armed or you might be minus a pickup truck, or worse.” I have little doubt that if I hadn’t been legally armed that day, the police officer’s words would have proven true. —PS, NC

Tell Us Your Story: Combat Handguns pays $100 for each “It Happened to Me!” letter that we print. Send yours to Combat Handguns, 1115 Broadway, New York, NY, 10010, or e-mail to tactical-life@harris-pub.com. Please include your full name, address, email and phone number (including area code). A signed release is required prior to publication. 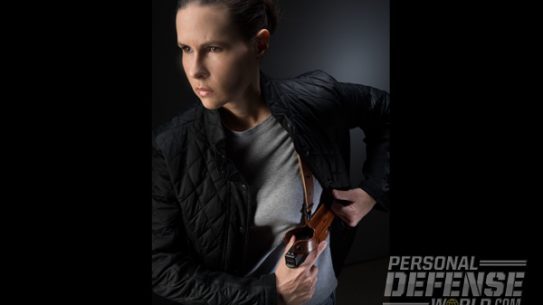 Finding the perfect reliable holster design to accommodate a female shooter’s needs for 24/7...