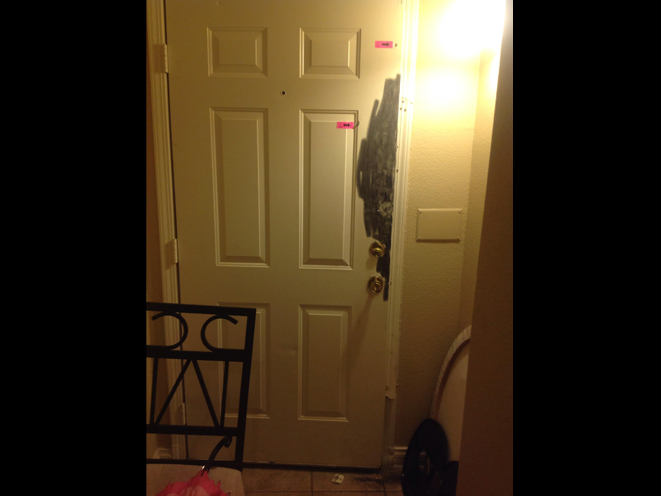 The victim posted this photo of her front door, along with a detailed account of the shooting, on Imgur, a photo sharing service used by Reddit users.
(Photo by Imgur)
Comment(s)

A dangerous stalker was shot in the chest after attempting to break into the home of his ex-girlfriend.

According to FOX5, police confirmed that the incident took place near South Durango Drive and Tropicana Avenue in Las Vegas at 1 a.m.

A woman, who wishes to remain unidentified, called police after her ex-boyfriend showed up at her house and started kicking at her front door. The man eventually managed to gain entry into the home, at which point the victim used her personal firearm to shoot at the man, hitting him once in the chest.

Upon being shot, the man fled the home while police arrived and investigated. He was discovered in some nearby bushes by a K-9 unit. The Las Vegas Review-Journal said the man has been taken to University Medical Center to be treated for his injuries.

The suspect has been identified as 22-year-old Douglas Eugene Jackson, FOX5 reported. The victim told FOX5 she had been forced to move, as well as obtain a restraining order and a concealed carry permit as a result of her stalker.

For the past 6 months I have been relentlessly stalked and had threats against my life made from someone I dated for a month. It started with phone calls upwards of 45-50 a day, 50 page text messages and him showing up outside of my house at 5 am. When I wouldn’t not comply or feed the negative attention I began to receive threats, claims that he would murder me and get away with it, all he would have to do is flee the country. Telling me he shouldn’t have to force me to be his friend or give him another chance or else. Every time I blocked his number from contacting me, he would then call me from different ones, try and pretend to be other people or have his friends or sometimes even random strangers he’d ask on the street( I once scared a unsuspecting guy half to death after informing him that the person who had just told him to call me was actually stalking me and I sent him proof, he ended up calling the police on him. He fled of coarse) After about 2 months of that I was evicted from my apartment building due to my neighbors no longer feeling safe because of his looming presence. I then applied for and was granted a TPO, A few days afterwards I received a picture message of the note the SHeriff Civil had left on the door of my Stalkers-then residence with a message taunting me that “What you are trying to do was stupid and a restraining order is just a piece of paper.” So ultimately he just ended up avoiding the process server and simple as that, I was not being protected at all.

May 31st of this year I relocated. This did not deter my stalker. He vowed to find wherever I moved to and threatened that if he couldn’t find me he would be able to find my family and then proceeded to send me a map of my mother’s home whom he had never met. I received a message from a woman claiming to be my former landlord, letting me know that I owed a balance on my account and to avoid late fees I needed to pay the amount which I could do with the link provided in the message. Turns out it was my stalker pretending to be a woman and the link turned out to be a tool used to grab the user’s IP address when the click the link. Upon this discovery I changed my phone number and began to systematically dismantle any trace of an online presence I once had. This action only seemed to anger him and before deleting the profiles outright I would attempt to block him from contacting me. Each and every time I blocked one he simply created a new one and proceed to contact me as if nothing had happened. 12 different reddit accounts, 9 different tumblrs, 10 different imstagrams, 3 meetup accounts, 4 facebooks (with which he changed his location to that of my hometown and proceeded to add nearly everyone from my graduating class in high school) and even 3 Duolingo accounts and myspace. Yes. MySpace.

In a separate post on Imgur, a photo sharing service used by Reddit, she describes the shooting itself, along with a photo of her front door (see above).

I’m writing this staring at the mess the police left for me, in a bit of a fog. After 6 months of stalking and threats against my life my stalker finally snapped and decided to kick my door in and make good on his promise.

Out of fear, the past month I had begun sleeping with a chair propped against my front door, to give myself a few extra precious seconds in case of emergency. I shudder to think how differently things might’ve turned out had I not barricaded the door.

I awoke around 1:15 am to the sound of the door giving way after one kick followed by the sounds of my stalker struggling to dislodge the chair while forcing his way inside. I jumped up and grabbed the gun I’ve learned to do everything even shower with.

I stood at the top of my stairs and fired twice. Hitting him in the chest, I hear his scream, his disbelief that I’d stood up for myself.. 0 to 100 in milliseconds. I’ve never been so afraid in my life. I do not know if he is living, but I do know the police have him and that’s what helps the most.

For months of him evading the police I began to question whether he was unstoppable. Untraceable. Houdini, he would murder me and get away with it. As of now I’m in a haze of guilt, surprise, relief and disbelief. I shook as the canines drag him out from his hiding place under a bush. I survived, where so many people do not. Holy shit, I survived. 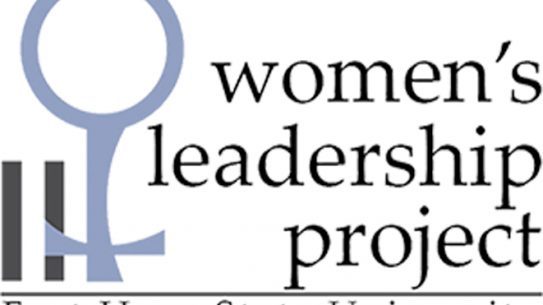 The Women's Leadership Project at FHSU is hosting a self-defense class as part of...