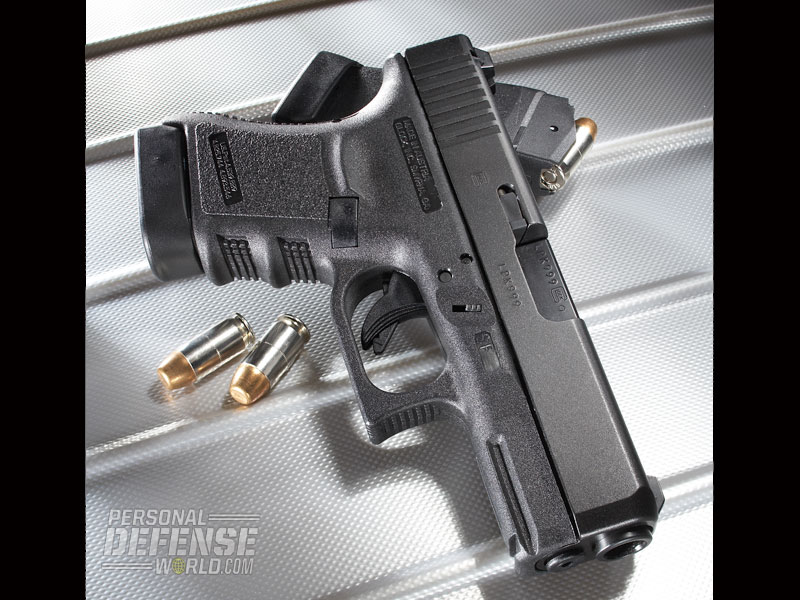 1 of 9
Photo by Steve Woods
Glock .45
Soon after Glock’s foray into the American market, the company learned that the diverse needs of the shooting public would be tough to satisfy. Initial demand for Glocks in .45 would shift to the demand for something smaller and more concealable, something thinner and something better suited for the smallest hands. In time, Glock would more than satisfy each of those requests. 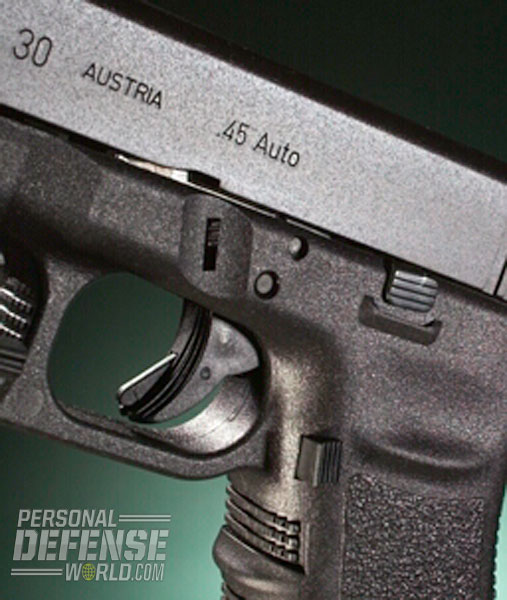 2 of 9
Photo by Steve Woods
Glock SF30
Due to the combination of a proportionally thick and rigid barrel and slide, and the double captive recoil spring system that Glock uses in its subcompact pistols, the G30 has proven to be the most accurate of large bore Glocks despite its short barrel and sight radius. 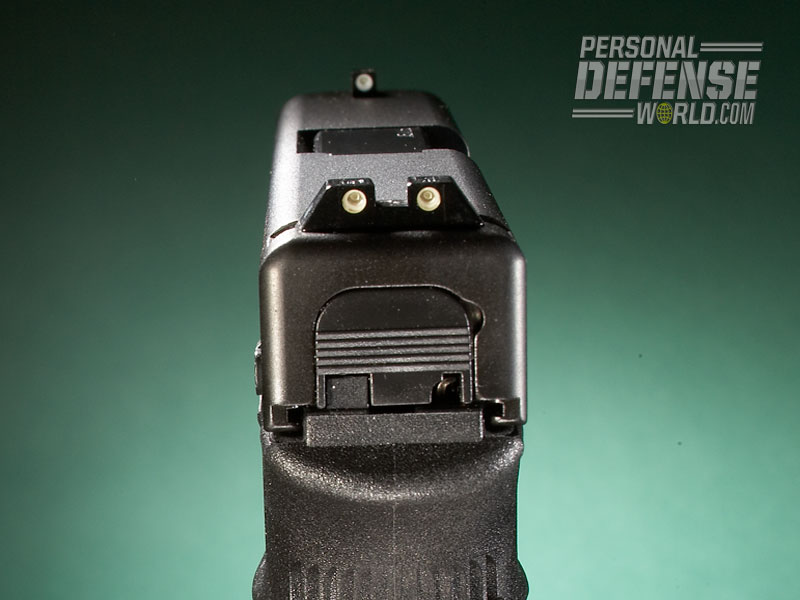 3 of 9
Photo by Steve Woods
SF 30
G30 has proven to be the most accurate of large bore Glocks despite its short barrel and sight radius. 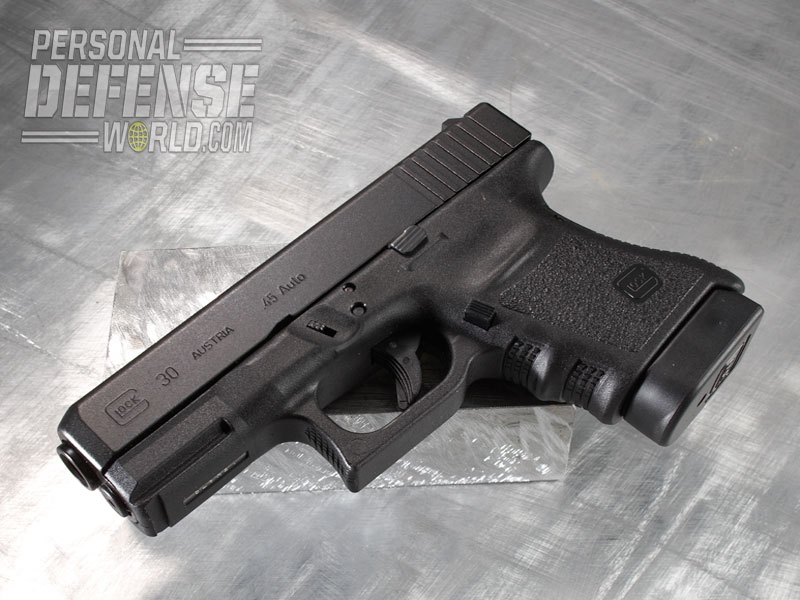 4 of 9
Photo by Steve Woods
Glock 30
The Glock 30 was the first compact .45 produced by the Austrian armsmaker and remains hugely popular. Essentially a “chopped and channeled” G21, the G30 is designed around a 10-shot mag, with an eleventh in the chamber. 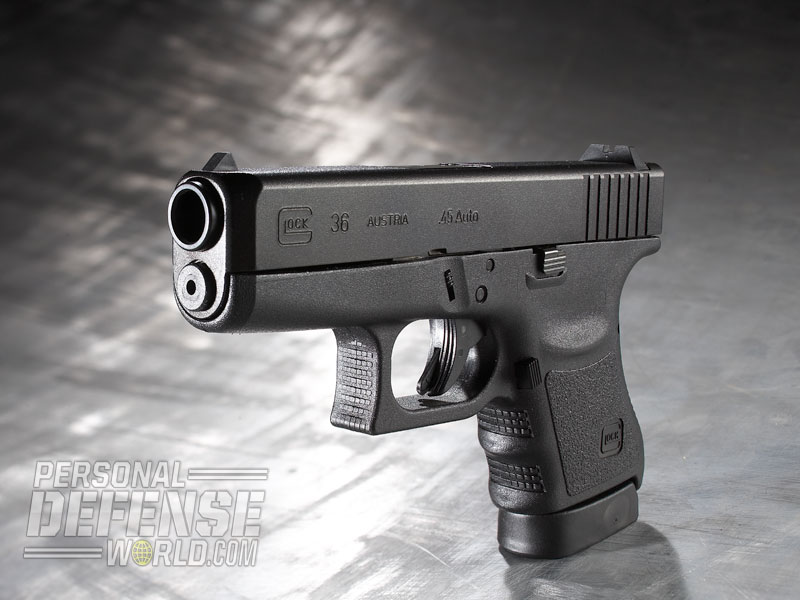 5 of 9
Photo by Steve Woods
Glock 36
Glock’s G36 is for the user who wants their thinnest polymer .45 ACP with the shortest trigger reach. 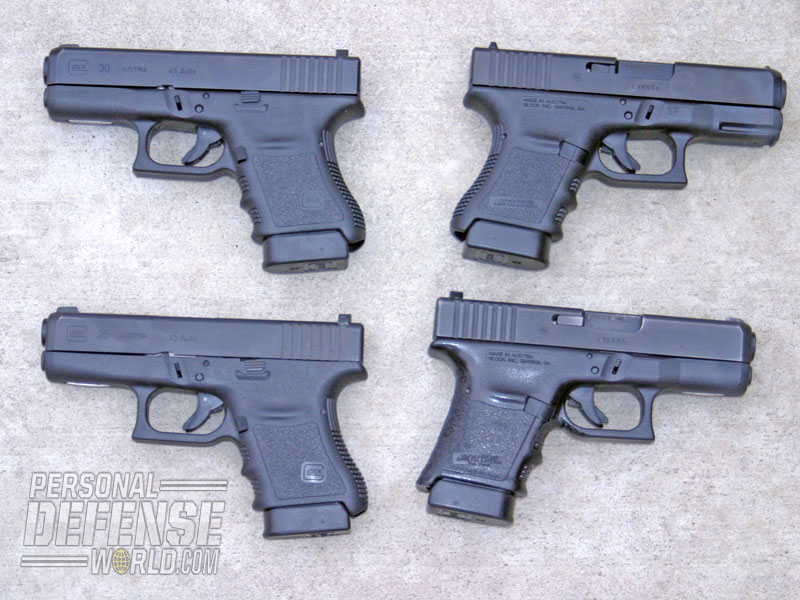 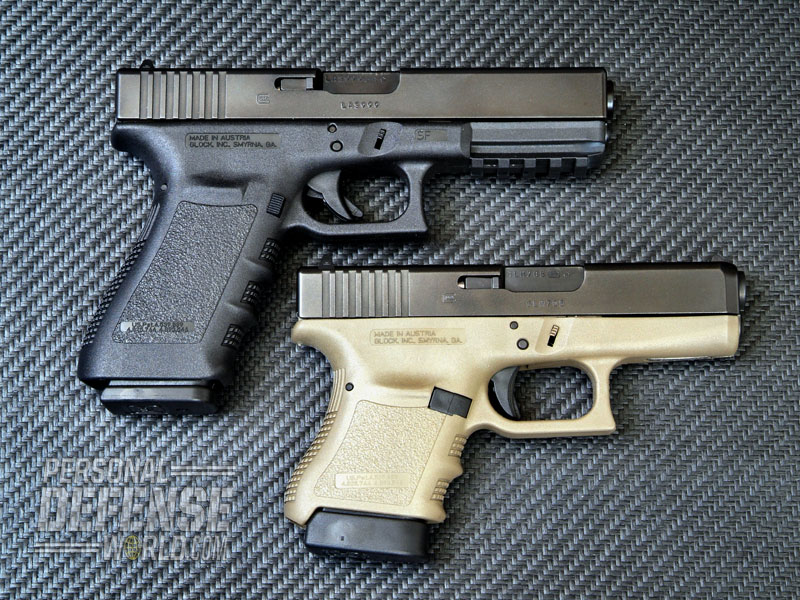 7 of 9
Photo by Denis Adler
Progression of the .45
In the span of 20 years, Glock has gone from no .45s to ten—all of them with a legacy of stopping power proven on the street and the battlefield for over a century. 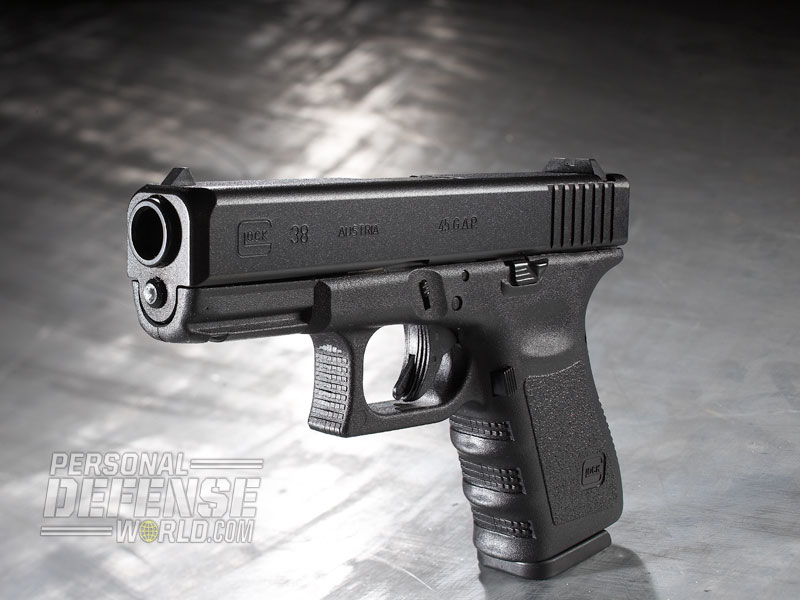 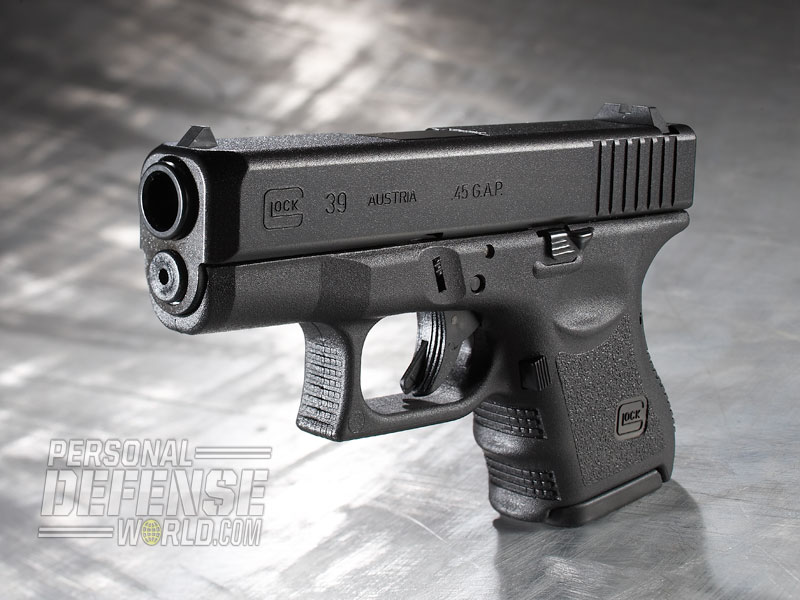 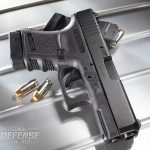 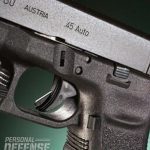 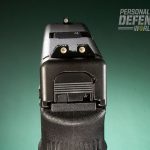 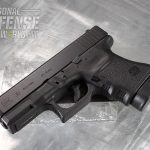 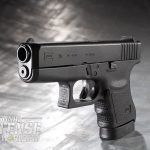 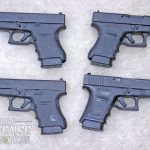 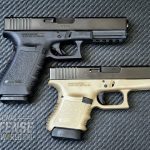 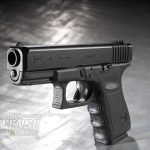 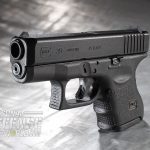 When Glock introduced the revolutionary Glock17 9mm pistol in the early 1980s, the company learned that the American market would be tough to satisfy. This is a John Wayne kind of country, and when the first demand from the US market was, “We want one of these in .45,” the company listened.

In 1990, I went to Smyrna, Georgia, to tour the Glock plant and become certified as both an armorer and an instructor under company auspices. While there, I got to handle one of the first Glock 21 pistols chambered for .45 ACP. Then and now, the G21 was built to hold 13 big .45 ACP cartridges in its double-stack magazine and a fourteenth in its firing chamber. Like its virtual twin—the Glock 20 in 10mm, which preceded it by a very short timeframe—the G21 was in essence the standard service-size Glock, scaled up to take a wider and longer cartridge.

Soon, demand would continue for other .45 ACPs from Glock, something smaller and more concealable, something thinner, something better suited for the smallest hands. In time, Glock would work to satisfy each of those requests. 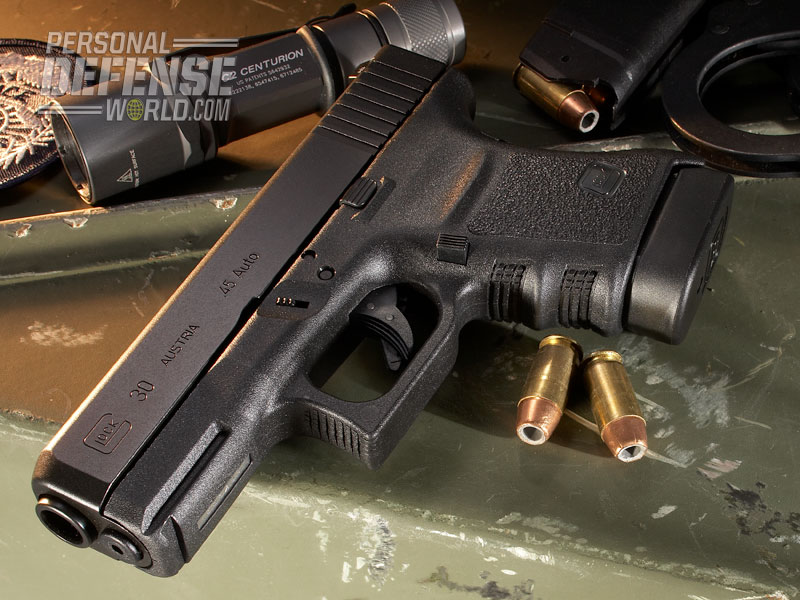 In the field for well over a decade now, the Glock 30 was the first compact .45 ACP produced by Glock and remains hugely popular. Essentially a “chopped and channeled” G21, the G30 is designed around a 10-round magazine, with an 11th in the chamber. The floorplate on the 10-round magazine extends low enough to allow the bottom finger a good hold. Glock has manufactured a shorter, flatter-bottomed 9-round magazine for those who require even greater concealment potential. Carried on the body, the G30 feels (and conceals) about like a G19. It is very slightly thicker through the frame, but this tends to go unnoticed in daily carry. Many G30 users carry their spare ammunition in 13-round G21 magazines.

Recoil is remarkably soft for such a lightweight pistol in .45 ACP. The G30 is extremely reliable with virtually every brass-case service load in its caliber. The G30 has proven to be the most accurate of large-bore Glocks, despite its short barrel and sight radius. The reason appears to be the combination of a proportionally very thick and rigid barrel and slide, and the double captive recoil spring system that Glock uses in its subcompact pistols. The latter apparently holds the slide very consistently in battery until the bullet has left the muzzle, before unlocking begins and the barrel begins to tilt during the automatic ejection/feed cycle that follows.

This writer has twice shot 5-round groups under 1-inch at 25 yards with the G30, once with Federal 230-grain Hydra-Shok ammunition and once with 185-grain Remington Match. Groups of 1.5 inches or less are reported with great frequency. Plan on 200 to 300 rounds of break-in fire before that level of accuracy presents itself, though reliability seems to be built-in from the first shot.

On the heels of the G21, the G30 was the second Glock to get the Short Frame treatment. This one never got an ambidextrous magazine release—it is simply the standard G30 with less space between the backstrap and the front of the grip-frame and the trigger. It feels very much like a G30 that has had a frame trim, an increasingly popular custom modification for Glock fanciers who want to get more hand around the gun and more finger in the triggerguard.

It shoots otherwise exactly like a G30, which is to say very, very well. At a Glock Sport Shooting Foundation (GSSF) match in South Carolina a year or so ago, this writer borrowed a friend’s G30 SF to shoot the Major Sub event, which is expressly for large-bore, small-frame Glock pistols. The gun delivered me the winning score. Needless to say, I was impressed. Its capacity is the same 10+1 rounds of .45 ACP as with the standard G30.

Responding to consumer demand for a thinner Glock, one with fewer rounds in return for a flatter gun and a grip-frame that allowed even more hand to get around the pistol and finger into the trigger than was delivered with the later G30 SF. With a magazine that now held only 6 rounds, with a seventh in the chamber, many found this to be the ideal Glock .45 ACP for fitting small hands. Yes, it had “only” 7 rounds, but for decades on the world’s battlefields America’s armed forces carried M1911 and M1911A1 pistols with empty chambers and 7-round magazines. With a safely chambered round, the G36 shooter had the same round count of the same powerful ammunition, and could deliver the first shot faster.

I’ve found that the G36 is not quite so inherently accurate as the G30, probably because the thinner slide is slightly less rigid. However, many people who carry a concealed handgun daily under dress codes that require absolute minimum thickness have found it to be the ideal personal protection gun for their needs.

The first new true 21st century service cartridge came around the middle of the first decade, in the form of the .45 GAP (Glock Auto Pistol) cartridge. Gaston Glock and his design team were joined by Ernest Durham and other experts at ATK Speer in creating a cartridge that would equal the ballistics of the standard-pressure .45 ACP round, but do so with an overall length that would fit the ergonomic envelope of the original G17 series pistol, designed for the 9mm cartridge. The combined effort succeeded brilliantly.

The .45 GAP was soon being manufactured by all the big ammunition makers in 185- and 200-grain loadings. When Winchester got on board, that company did so with recent research from their WSM (Winchester Super Magnum) line of short, very potent high-power rifle cartridges. Winchester used that new technology to become the first ammunition manufacturer to produce a 230-grain .45 GAP round.

Before long, five state police agencies had adopted the Glock in .45 GAP as the standard-issue service pistol for their troopers. The perceived enhancement of “stopping power” offered by the .45 was one reason. The ability to go with the smaller, standard-size Glock frame was another. With many petite females and small-handed or short fingered males in their ranks, law enforcement agencies knew that some departments had lost heavily in “disparate impact” lawsuits from officers who had been fired for failure to qualify with issue service sidearms to big to fit their grasp.

Now we have one more .45 GAP, the G37 in Gen4 configuration with enlarged magazine release and adjustable-for-size backstrap panels. The Florida Highway Patrol is currently fielding it. The GAP has proven relatively more popular as a law enforcement cartridge than it has among the general public, which buys pistols one at a time for individual needs. Even so, there is a growing appreciation of the .45 GAP in the civilian sector.

This is the compact .45 GAP. It features the same dimensions as a G19, a G23 or a G32, save for its slide being a mere 2mm wider. The G38 takes 8 rounds in the magazine and one more in the chamber—the same as a late-model 1911 .45, but smaller and dramatically lighter. Curiously, it feels to me as if it recoils slightly less than the full-size G37. That might be due to less slide mass rocketing back and forth during cycling, or to the slightly stronger recoil spring.

My notes show that when I tested a Glock 38 for the police professional journal Law and Order, it put five Speer Gold Dot .45 GAP JHP rounds into 1.75 inches at 25 yards with the best three of those hits all in under 1-inch. That’s excellent accuracy potential out of a compact, lightweight .45 caliber handgun, in anybody’s book.

The subcompact “Baby Glock” pistols have proven hugely popular for plainclothes wear both in law enforcement and among America’s still-burgeoning population of ordinary, law-abiding citizens who carry concealed handguns to protect themselves and their loved ones.

This is an amazing little gun. It has the same cartridge capacity as the Glock 36 in .45 ACP—6 rounds of .45 GAP in the magazine and one more in the firing chamber. Because of the softer “push” of the bigger, slower-moving bullet’s recoil, the G39 in .45 GAP feels as if it’s kicking less than the same-size gun with a full-power .40 S&W or .357 SIG load, though of course it’s not as mild as the recoil of a G26 in 9mm.

I’ve watched troopers of the Georgia State Patrol qualify on the firing line with these guns. They’re all issued a G39 to supplement their full-size G37 for use as a backup or off-duty firearm. No problems.

In the same test referenced above for Law and Order magazine, I found that my test sample G39 had a trait common to semi-automatic pistols known as “4+1 Syndrome.” The first shot would go to a slightly different point-of-impact than subsequent shots fired with the same sight picture. It is generally believed that this is due to the fact that when the first cartridge is hand-cycled into the firing chamber, the gun’s parts are in a subtly different alignment than where they wind up in subsequent shots after the mechanism has automatically chambered the follow-up rounds. With the G39 and Winchester 230-grain ball training ammo, I was able to get 5 shots into 3.9 inches at 25 yards, but the last four of those were in 1.9 inches and the best three went into 0.95 of an inch. This is extraordinary performance for a subcompact large-bore pistol with short barrel and sight radius. 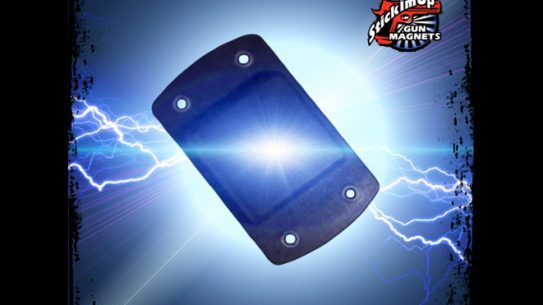 The StickImUp Gun Magnet is a patent-pending gun dock which enables the end user...