There are many myths floating around out there in the world of armed self-defense. Some are wishful thinking—the sound of whistling past the graveyard. Some are sincere beliefs that merely lack a foundation of truth. And some are generalities that may not apply in specific situations. Let’s look at just a few of those. 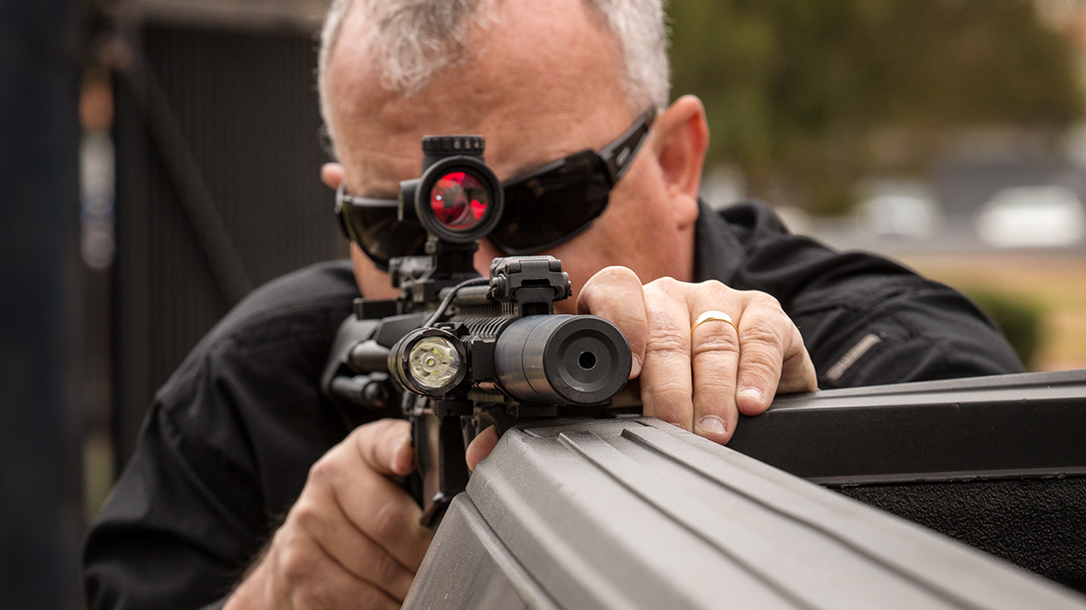 Alas, that’s not always the case. Sometimes you can’t do it with six, but you can end the deadly threat with, oh, seven … or eight, or 19, or maybe 33.

Back when the only state policemen carrying autoloaders were those in Illinois, with all the rest packing six-shooters, Illinois State Trooper Ken Kaas got into a shootout with a gunman armed with a semi-automatic shotgun. Each was using his vehicle, successfully, for cover. Midway through the firefight, the gunman suddenly stood up and left his cover, rushing toward. Trooper Kaaswith his shotgun up and a wolfish grin on his face. Ken shot him in the midriff and the criminal fell. It was over.

The suspect survived. In the “prison ward” of the hospital, guards overheard him talking with his appointed attorney. The exasperated lawyer asked him why he had left a position of safety to practically walk into the muzzle of the trooper’s waiting gun. “He fired six shots!” the recovering would-be cop-killer exclaimed. “I swear to God!

He fired all six!”

As carefully as he kept count, the criminal didn’t know that Illinois troopers carried Smith & Wesson 9mm semi-automatics. Ken had shot him down with the seventh round in his Model 39, most certainly averting his own death, since the trooper could never have reloaded an empty six-shot revolver fast enough to stop the deadly charge.

Another Illinois trooper, Sergeant Les Davis, had a somewhat similar experience. He confronted an armed murderer on a wind-whipped snowy night, his S&W semi-auto against the killer’s pump-action shotgun. As the man rushed toward him, firing after Les’ sixth shot, Les fired twice more and the man pitched to the ground, dead. The sergeant had killed him with either the seventh or the eighth shot from his semi-auto.

In the late 1970s, I did a study of the shootings Illinois troopers had experienced during the first decade in which they’d had semi-autos instead of revolvers. I was able to identify 13 who had survived with those guns, when they probably would have died if they’d had the old six-guns. Most involved gun grabs where the troopers were saved because the bad guy couldn’t find the safety catch when he got control of the gun, or the trooper had pressed the magazine release during the struggle and deactivated the round in the chamber via the S&W Model 39’s magazine disconnector safety.

But four of those saves were absolutely firepower based. Two were Kaas and Davis, cited above. The other two were Bob Kolowski and Lloyd Burchette. Ambushed by a two-gun outlaw biker, they fired more than 20 shots and achieved 13 or 14 hits before attempted murderer Wayne O’Brien slumped and died. Kolowski had reloaded during the blazing gun battle.

And what about armed citizens? Famed Los Angeles watch shop owner Lance Thomas was involved in multiple gun battles with armed robbers, winning every one. In one of those incidents, he had to fire 19 rounds before the last of his multiple opponents was out of the fight. Some bad guys can soak up an unbelievable amount of lead, and the cunning ones run and use cover, making them harder to hit and requiring more shots to stop them.

A municipal police sergeant in northern Illinois, Tim Gramins, comes to mind. He pulled over a heavily armed suspect who came out shooting, and the fight was on. In just under a minute, the perpetrator was finally down and dead. During that time, Gramins had fired 33 rounds from his Glock 21 pistol, reloaded as necessary and hit his opponent 14 times with 230-grain Gold Dot .45 bullets. Six of those hits were in what most of us would call “vital zones,” but he fight wasn’t over until Gramin finally had the opportunity for brain shots.During that fight the suspect had gone through two semi-automatic pistols himself and had fired 21 shots.

That’s a convenient excuse for not carrying those things, but it’s unrealistic. In the case just mentioned, Sergeant Gramins began in his patrol car with a 12 gauge Remington 870 pump shotgun in an overhead rack and an AR-15 patrol rifle in the trunk, and it happened so fast that he was never able to deploy anything but the pistol on his hip and the magazines in his belt pouches.

Perhaps the most famous gunfight of the 20th century was the shootout between suspects Michael Platt and William Matix and a squad of FBI agents in Dade County, Florida, on April 11, 1986. Platt, armed with a .357 revolver and a stolen Mini-14 rifle, killed two FBI agents and wounded five more, three permanently. He inflicted all of that trauma with what was on his person at the opening of the encounter.

Of the agents, the only one to employ a long gun was Ed Mireles, who had his Remington 870 in hand when the fight started. He emptied that shotgun even though severely wounded, and then at the end of the fight emptied his S&W Model 686 revolver, killing the two perpetrators. Supervisory Special Agent Gordon McNeill got off the first police shots of the fight, wounding Matix, but when he was wounded too badly to reload his empty revolver, he was unable to get back to his car for the shotgun before Platt fired another .223 round that crippled him for life.

The history of gunfighting is, when the fast and furious shooting starts, what we have on our person is all that we’re likely to have to fight with.

However sincerely some seem to believe that, it’s simply untrue. I’ve lost count of how many gunfights I’ve studied where the survivor said something like, “I was pointing the gun and firing as best I could and nothing was happening. Then I remembered to aim with my sights, and the other guy went down and it was over.” If you study the history of Wyatt Earp, you’ll find that he may well have killed 10 men with gunfire. He told his biographer Stuart Lake that—with one exception—he was always careful to align his “foresight” with his “back sight” and to squeeze, not jerk, the trigger. Wyatt Earp died at a ripe old age, never having sustained a gunshot wound himself.

During the violent epoch of the NYPD Stakeout Squad, the one member of the unit who killed more criminals in shootouts than his famous partner Jim Cirillo was Bill Allard, who Jim publicly credited with having saved his life in one particularly ugly encounter. Allard is on record as saying that in all but one of his shootings he was able to see his front sight so clearly that he could have counted how many grooves were machined into it.

This is also over-simplistic and untrue. I just quoted two great gunfighters, Wyatt Earp and Bill Allard, who won many shootouts carefully aiming their guns. But notice that each had “one exception.”

Wyatt Earp confronted Frank Stilwell, believed to be the murderer of his brother Morgan Earp, at the train station in Tucson, Arizona. Stilwell grabbed the barrel of Earp’s shotgun in an apparent attempt to disarm him. Earp levered the butt of the shotgun down and the muzzles up, jammed the twin barrels into Stilwell’s midsection and cut loose. The battle was over.

Bill Allard confronted an armed robber in a market and shouted the command, “Police! Drop your weapon!” The gunman swung on Allard, who shot the gunman in the chest with a blast of 00 buckshot from his 14-inch-barreled Ithaca Model 37 12 gauge shotgun. The man jerked back away from him, still wielding the gun, and Allard pumped another blast of 00 buckshot through his thorax. The gunman was still up and running. Allard’s partner (an officer other than Cirillo that day) then deliberately shot the suspect in the butt with his .38 Special revolver to break his pelvis and bring him down. The .38 did exactly that, and the suspect sprawled on his face, dropping his .32 semi-auto.

Allard lowered his shotgun to a low-ready position and slowly moved in on the downed man. Suddenly, the gunman snatched up the dropped pistol and tried to roll over and bring it to bear to kill Allard, who simply pulled his own trigger and hammered a third round of buckshot into the man’s chest. The suspect dropped the gun for the last time, and the fight was over.

“Jelly” Bryce, one of the greatest police gunfighters of the first half of the 20th century, was famous for his point-shooting skills. He killed many an armed criminal firing that way. Being able to fire and hit without the sights in a perfect sight picture is, without question, a useful survival skill. As with so many elements of gunfight survival, it’s not a question of this or that—it’s a mandate for this and that.

In 1867, Dave Tutt opened fire on Wild Bill Hickok across the town square in Springfield, Missouri. Hickok carefully aimed his .36 caliber Navy Colt two-handed and shot Tutt through the heart, killing him. The ruling: Justified.

Fast-forward about a century to 1966. Charles Whitman began a murder spree by firing his scoped rifle from atop a 330-foot clock tower in Austin, Texas, killing people hundreds of yards away. When police .38s and buckshot proved impotent at that distance, private citizens on the ground returned fire on Whitman with hunting rifles and target rifles. Whitman was forced to take cover and stop shooting. Armed citizen Allen Crum then led Austin policemen Houston McCoy and Ramiro Martinez to the top of the tower. Crum fired the first shot of the encounter (which may have broken Whitman’s planned ambush of the officers), and McCoy and Martinez shot Whitman dead. Martinez later publicly credited the armed citizens with stopping the killing. They became heroes, not defendants.

Fast-forward again to Brownwood, Texas, in 2012. A man went berserk and began killing his neighbors. When the first responding officer arrived, the killer pinned him down with a .30-30 rifle. Armed citizen Vic Stacy shot the gunman from some 65 yards away with a Colt Python .357 Magnum revolver, wounding him badly enough that the officer could take control and finish the fight, killing the killer. Far from becoming a defendant, the heroic citizen was presented with a fine rifle by appreciative Texas Governor Rick Perry.

An article on “myths of gunfighting?” We could write books on the myths of gunfighting. The foregoing is presented because every life-threatening encounter is different, and to believe in overly simplistic things is to believe in myth instead of reality. If and when any of us is in a gunfight, it will most assuredly be reality, in all its various forms, by which we will live or die.