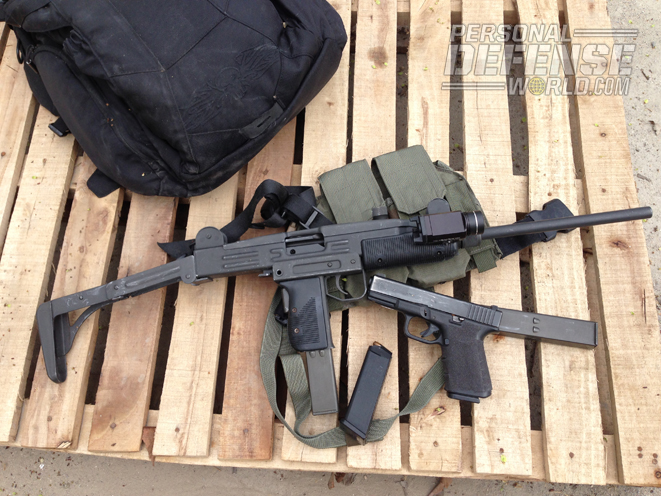 1 of 10
Build a Survival Arsenal
The Century Arms UC-9 and a Glock 19 make a very rugged and complimentary disaster weapons battery should you need to be on the move, interacting with other survivors. 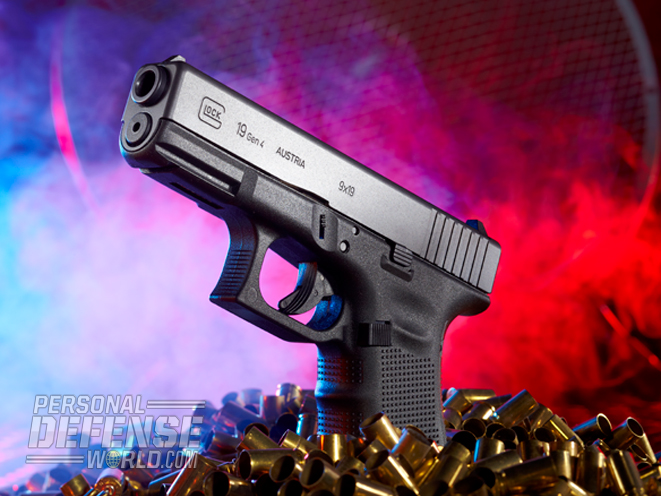 2 of 10
Build a Survival Arsenal
The Glock 19 Gen4 ranks high as a survival pistol because of its tank-tough reliability, 9mm chambering and concealability. 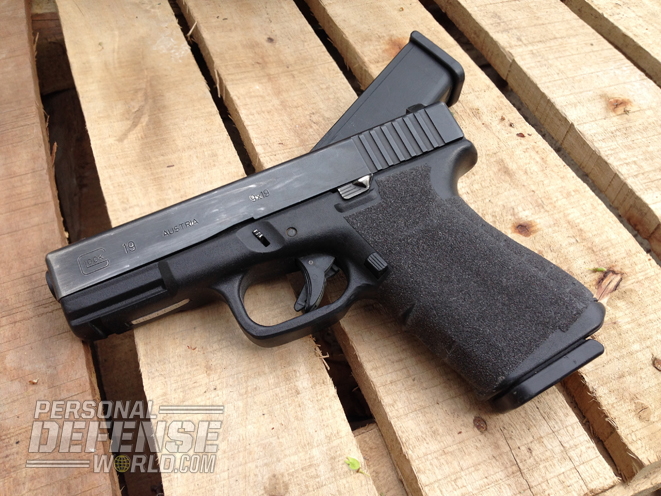 3 of 10
Build a Survival Arsenal
The Glock 19 is often called the Universal Pistol. It is a perfect size for either concealed or open holster carry, reliable in the extreme and has an extremely long service life. 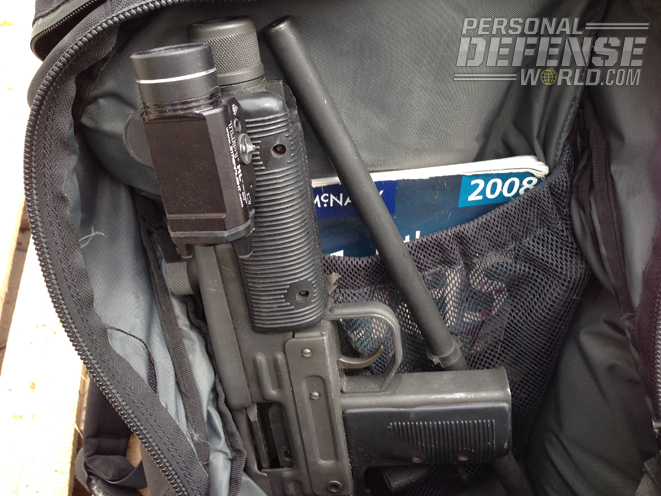 4 of 10
Build a Survival Arsenal
The Century Arms UC-9 with the barrel removed is easily concealed in a standard backpack which would not attract notice in a crowd. 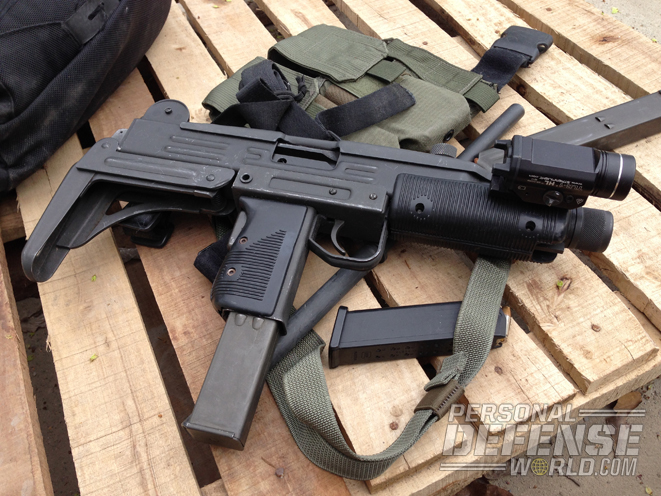 5 of 10
Build a Survival Arsenal
Clearly showing its Uzi lineage, the Century Arms UC-9 is a more than capable Disaster Weapon. When equipped with a 630 lumen Streamlight tactical light, the UC9 is a formidable defensive package. 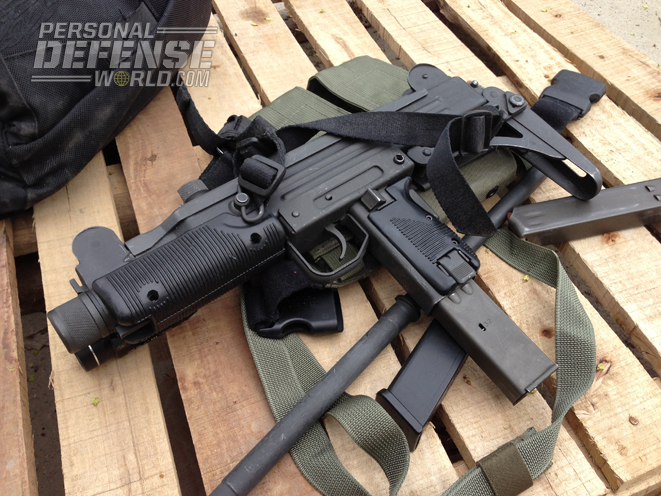 6 of 10
Build a Survival Arsenal
With a large magazine release button, provisions for a two point tactical sling and both a standard thumb and grip safeties, the UC-9 offers much in terms of a compact, reliable and concealable weapon system. 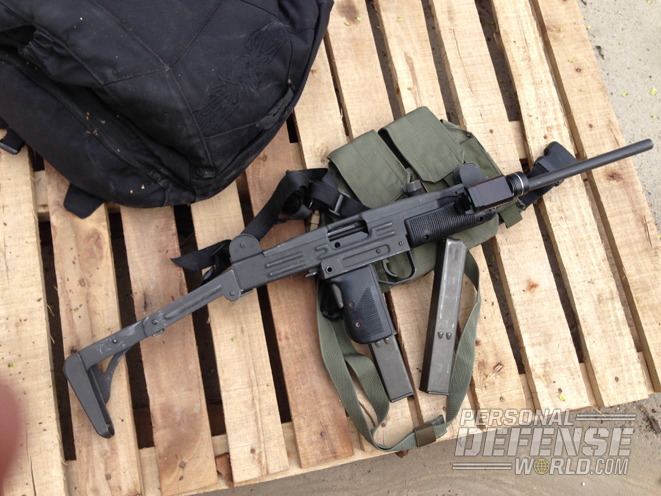 7 of 10
Build a Survival Arsenal
Even with the stock extended and barrel installed, the Century Arms UC9 still makes for a compact and reliable firearm. 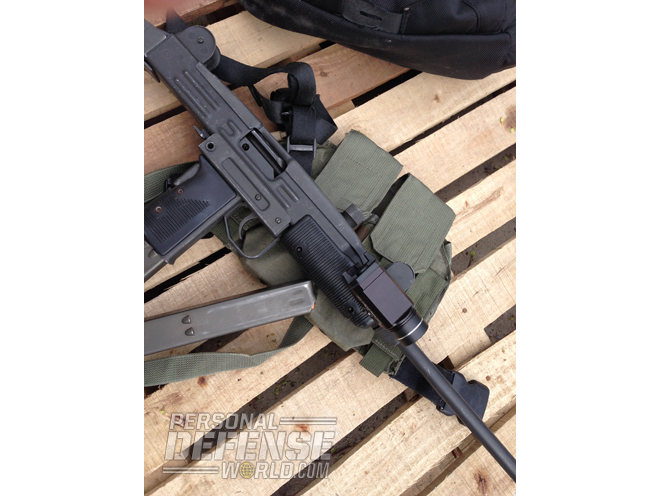 8 of 10
Build a Survival Arsenal
Attaching a short length of picatinny rail allows for easy mounting of the 630 lumen Streamlight tactical light, a must for defensive scenarios. 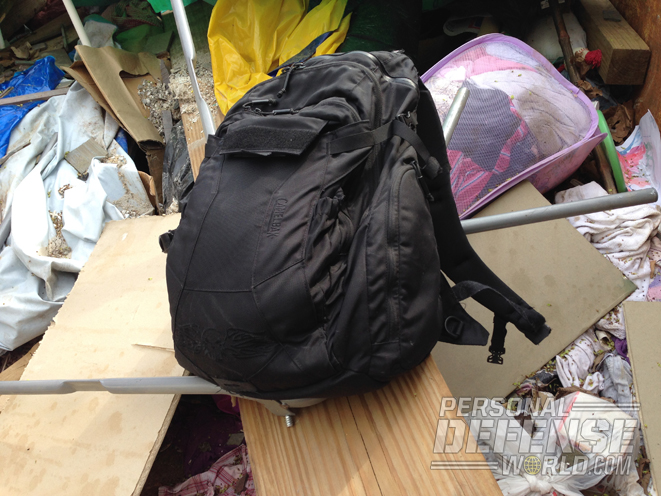 9 of 10
Build a Survival Arsenal
The rugged Cambelback ‘Urban Assault’ backpack easily contains the UC9, Glock 19 and all of their assorted support equipment including well over 300 rounds of ammunition, all in a ‘civilian camouflage’ that is unlikely to get a second look from others on the street. 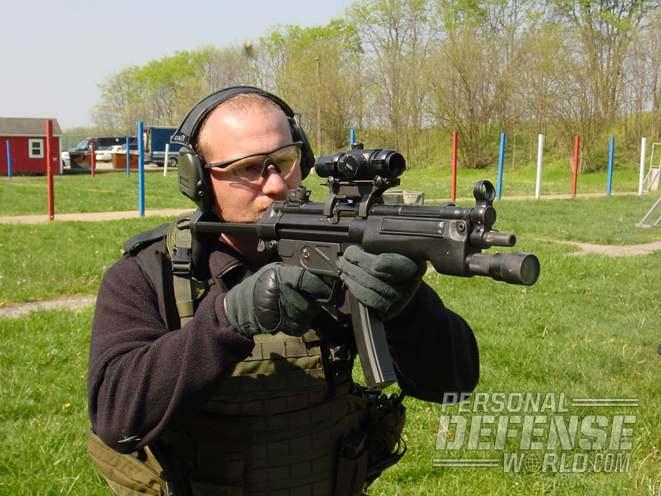 10 of 10
Build a Survival Arsenal
Elite military and LE operators have long used submachine guns like the HK MP5 when they needed compact, concealable firepower. 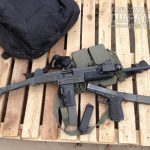 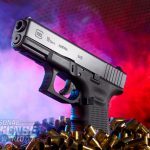 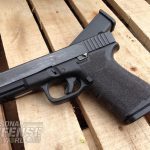 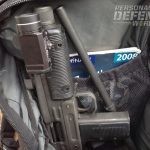 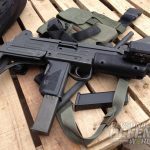 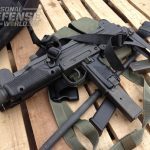 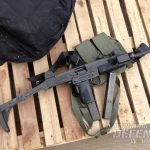 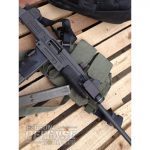 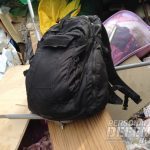 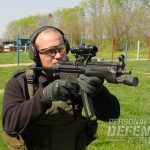 As the world situation continues, in some opinions, to decline, a significant number of individuals have become interested in all things “survival,” amongst which is the topic of survival firearms. One has but to do a quick search on the internet and a variety of opinions about the subject are there for the reader to digest—such a variety that, for many, the issue has become a little more than confusing.

When you begin to look toward establishing a “survival” battery of defensive firearms, the first thing that you must account for is exactly what you think your situation might become. Are you perhaps planning to survive a local or region-wide disaster where normalcy and the rule of law will eventually return, or are you imagining yourself in the true end-of-the-world scenario? The scenario that you plan for will greatly alter what weapons you might select. Of course, opinions will vary as to what is the all-around “best” survival firearm for any situation, but in truth the best weapon is the one you have in hand when you need it.

The first rule of building a survival-firearms battery is therefore simple: Own a gun. After that, the envisioned scenario, and how the particular firearm fits within it, becomes paramount. For each situation that you envision, you must plan for your defense, which means obtaining, and having the ability to carry, a small battery of arms.

In any survival situation, your firearms must be reliable in the extreme, requiring little or no routine maintenance beyond cleaning, be common enough that there are easily accessed spare parts and accessories that do not require specific hand-fitting, and be chambered in a caliber that can be easily located and purchased in quantity before the disaster and possibly found or acquired after.

A lot of knowledgeable individuals would advise buying an AK-47 or AR-15, a .45 ACP pistol and a shotgun for a “disaster battery,” and they’re all excellent weapons. The problem, however, is that these firearms, while they may be excellent for end-of-the-world-type scenarios, do not fit well within lesser but much more likely scenarios, such as a region-wide disaster—massive flooding, an earthquake, hurricanes—
that could require evacuation from the affected area.

The one factor that eludes most non-NFA long guns is the subject of concealability. Where does this subject fit in a discussion of a survival firearms battery? Simple: It’s not easy to hide most long guns, and if they’re not hidden, everyone knows you are armed. While appearing armed might be good in some extreme situations, or might not be much of a concern when you do not plan on ever having to leave your home, in many situations it will make you more of a target, lessening your overall chances of survival. It also takes away one of the core tenants of any successful tactical action should it come to that: surprise.

When building a survival battery, one should look instead toward acquiring several categories of firearms. First, there are the “defense of the castle” or “all-out battle” guns. Here is where assault rifles such as the AR-15 and AK-47 rule. Well-proven and best suited for those who need to defend a fixed place of residence or are engaged in all-out battle, the AR-15 and AK-47 designs are each well represented in the market. You simply need to choose the manual of arms that suits you the best, and any number of models is readily available, as are accessories, spare parts and ammunition.

As good as these weapons are, however, they are not going to be as viable if you have to leave your home or deal with other survivors. They are simply too visible, and as such they may be subject to confiscation, or, at best, you might not be allowed onto a public transport or into a shelter, so it becomes important that a survivor be armed without appearing so.

In choosing arms that preserve this option, the first, and arguably most important, in our disaster battery is the king of concealment: the pistol. Aside from a spouse, the choice of any defensive or survival pistol should be amongst one of the most personal decisions anyone ever makes. What is a great choice for one person will not work at all for another. While there are many pistols on the market, one of the most rugged and dependable pistols of all time that remains extremely common in law enforcement, military and civilian use is the Glock 19.

The Glock 19 has repeatedly been referred to as the “universal pistol” because it is big enough to be used as a full-sized holster gun but small enough to offer extremely good concealability. Weighing less than 1.5 pounds, the Glock 19 is exceedingly reliable, it’s chambered for the 9mm—one of the most common calibers on the planet—and it has an extremely wide distribution all over the world, meaning spare parts and magazines are everywhere. Couple that all with the fact that the Glock 19, in Gen3 and Gen4 models, is capable of accepting a variety of accessories, such as tactical lights and lasers, making the Glock 19, in my opinion, one of the best all-around survival choices.

As good as the Glock 19 is, however, it simply does not allow for much of a “standoff” distance should things go south. So what about obtaining a long gun that can be concealed for use as a “movement” weapon?

For years the heavy hitters among the law enforcement and military communities who, for a variety of reasons, needed to move about in public unseen but heavily armed have relied upon submachine guns or their more modern equivalent, personal-defense weapons (PDWs), such as the HK MP7 or FN P90. While PDWs are excellent, most are not at all common in a civilian arena, nor are spare parts or ammunition. What are available however, are the civilian equivalents of several well-proven submachine gun designs.

For a concealable long gun that more than meets our disaster survival criteria, one needs to look no further than the Century Arms Centurion UC-9 as possibly one of the best current overall choices. Based heavily on the iconic Uzi submachine gun, the design is extremely rugged and shares a large parts commonality with the Uzi, including magazines, which are easily located at affordable prices. Add to this the fact that it fires the same 9mm cartridge as the Glock 19, which will greatly simplify logistics for a survivor on the move and, almost as important, it can be stored concealed in an average backpack or large messenger bag, allowing for it to go unnoticed until necessary.

While the 9-pound UC-9 seems as though its weight is prohibitive, it’s extremely well balanced. As modern defensive ammunition has made huge strides in the effectiveness of the 9mm, particularly from the longer 16-inch barrel, this becomes a great choice for a disaster weapon that will easily extend the survivor’s standoff distance to 75 and 100 yards—much farther than a pistol’s typical range. It is not a rifle, but it fills a significant gap in the disaster weapons arena.

The Glock 19, UC-9 and similar combinations make a great disaster survival battery for those who may need to move around after a disaster and thus do not anticipate having a fixed place to defend. While they are not the “be all, end all” of survival weapons, taken together they represent an extremely viable alternative to more traditional survival weapons and should receive careful consideration by those who strive to be prepared for disasters.

This article was originally published in the 2015 issue of GUN ANNUAL. Subscription is available in print and digital editions here. 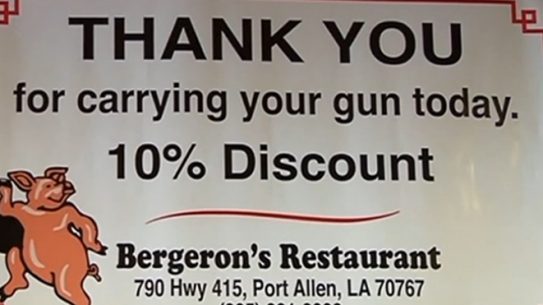 Discount for gun-carrying customers proves a hit at Bergeron's Restaurant in Port Allen.