by Michael Humphries
in Home & Self-Defense
0

Dave Sevigny, an accomplished competitive shooter and handgun enthusiast, has learned what it takes to win on the range.

Dave Sevigny has always had a knack for building and using mechanical objects. At technical school, he studied machine tooling, and at age 16 Sevigny landed his first job as an apprentice tool-maker. At the same time, he started shooting, focusing first on rifles and shotguns, and later, at age 20, when he applied for a concealed-carry permit, handguns. At 24 he discovered the wide world of action shooting sports. Sixteen years later, Sevigny has over 200 major match wins to his credit, including multiple national and world championships. One of the greats, he shoots professionally, along with his wife Brooke, for FNH USA, Gaston J. Glock Style and Pro Ears, among others. He also contributes to COMBAT HANDGUNS.

What was the first handgun you ever fired? What age were you?
I was able to try various semi-auto pistols and revolvers at outdoor sports fairs in Connecticut at age 18, which sparked my interest. It wasn’t until later that I was able to really learn handguns. At age 20 I worked with a .357 Magnum revolver. A friend of mine owned it, and I became very interested in learning how to shoot pistols. Not long after this, I bought my own semi-auto .22, a semi-auto .40 and a .357 Magnum revolver to get the full effect.

How did you get involved in competitive shooting?
After a few years of target shooting, I found some regional practical handgun events to compete in. There were a few shooting sports and divisions designed for stock pistols, and I broadened my activity as a competitive shooter from there. One of the gun clubs I belonged to in Connecticut had a handgun pit that allowed me to do everything I needed to train. This included small steel plates and a barricade, and the club permitted 90-degree angles of fire from the rear line, which really helped.

How often do you shoot?
A few times a week between practice and matches. All my other time is spent with admin details, cleaning, inspecting parts and other things related to my work with FNH. I average 20 club-level events and 20 major competitions each season in USPSA, IPSC, Steel Challenge, Action Pistol and Pro-Am. Cross-training is important, and throughout the season I rarely spend more than two weeks with any one pistol. 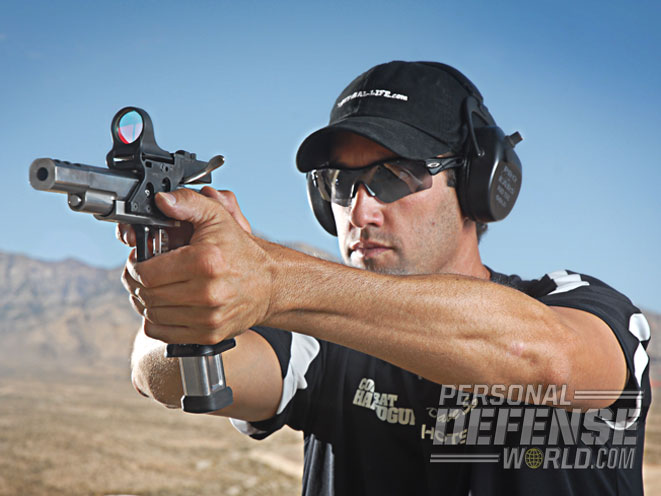 What’s your favorite style of shooting?
USPSA. I think it is the most thorough test of overall shooting skill and gun manipulation, and it is definitely the most fun of all the sports that I know of. Pro-Am (knock-down steel) is a close second, but that is an annual match versus year-round events like USPSA.

What is your favorite pistol?
Over the past few years I’ve grown to like single-stack 1911s most. The pistol I compete with in USPSA Single Stack is a .45 ACP using 230-grain FMJ ammo. A close second is the FNH FNS series. I’ve had a lot of success with the “L” models over the past few years in Steel Challenge, Action Pistol, USPSA and Pro-Am competition. Plus with the 5-inch “L” models and standard 4-inch FNS pistols there are options for carry, target shooting and law enforcement use. The FNS pistols are tough, reliable and easy to shoot.

What is your favorite chambering?
I like 9mm for high-volume practices, but I shoot several of the popular calibers depending on the sport and division—9mm, .38 Super Comp, .40, .45 ACP.

What is your favorite type of holster?
I prefer Kydex hip holsters for Production and Single Stack divisions. Kydex is light in weight, fast to draw from and retains the gun well. For Steel, Limited or Open divisions, I use a Rescomp CR Speed holster. I like the adjustments, and for steel shooting you can gain some speed versus the Kydex type, which covers more of the gun. 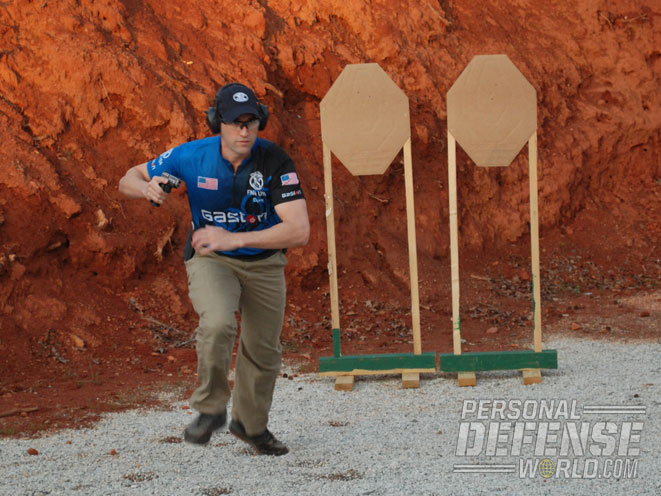 What’s your fondest match memory?
My first few national championships, when everything in my training and preparation was rewarded. I learned what worked and how to be competitive in shooting sports.

What kind of off-range training do you do throughout the year?
During the off-season I still try to get in as much live fire as possible, but it is supplemented with dry practice. I go through trigger press manipulations, presentations, draws and mag changes. I use actual pistols and SIRT pistols from NextLevel Training for dry practice. Post-Its make good aiming points, and you can add dots or draw in hard cover on them.

Who in the shooting world has influenced you the most?
Scott Warren, who retired from the FBI Hostage Rescue Team. As I was in the process of getting dialed in early in my career, Scott gave me valuable advice and encouragement directly related to competition shooting. He knew I “had it,” but I was somewhat reckless in my developmental stages. Often times I would push too hard and blow a stage, so I had to clean up and become more consistent. Scott and I remain close friends, and I still consider him my coach. During one of our early training sessions we talked about sight pictures and what we wanted to see when we shoot. Today, we have a line of championship-winning and carry-friendly pistol sights [Warren Tactical Series] for a variety of popular handguns.

Is competitive shooting applicable to self-defense?
Yes, because you are forced to learn how to safely handle a gun and shoot well under various levels of stress that cannot be duplicated on a static target range. Plus, in competition you are given feedback where you stand relative to others at your skill level. There’s no hiding from a score sheet, and everyone I know wants to do the best they can. 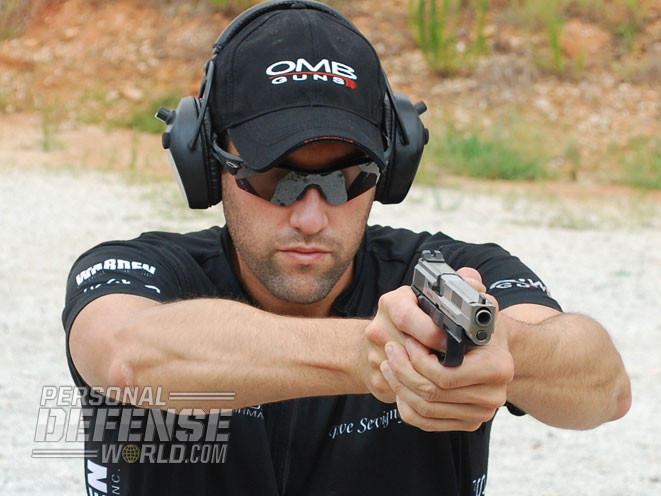 How often do you dry-fire?
During my developmental stages I would dry train for several hours a week. I still dry train to work on draws, presentations, trigger prep and press, manipulations, magazine changes, movement and anything related to a skill we need as practical shooters. Live fire is best whenever you can get to the range, but there is nothing bad about familiarizing yourself with the feel of the trigger and the features of your pistol as often as you can with dry fire.

If you weren’t a pro shooter, what would you be?
I like manufacturing products made of metal. I have not yet learned everything on the gunsmithing side of it, but when that happens I am going to build a nice pistol. The tolerances we held in shop for precision gauges were 50-millionths of an inch at times, and 2D steel work is what I specialized in at an early age.

Any advice for aspiring shooters?
Simplify your training, recognize your faults and run measurable tests to track your progress. You have to love shooting enough to work at the things needed to build your skill level, so avoid burnout by balancing your activities. Compete as much as you can and take each lesson learned to have a better match or practice on the next outing.

What Role Will the Supreme Court Play as the Left Goes After Guns?