by Shelley Sargent
in Home & Self-Defense
0

It can difficult enough for us to just carry a concealed gun and dress fashionably, but trying to add in spare ammunition presents a problem all its own. While carrying extra magazines for a semi-automatic handgun is straightforward enough, there are so many options for carrying a revolver reload that it’s possible to tailor how you carry those extra rounds to your style, training or preference.

Speedloaders, such as the Safariland Comp line, are one of the quickest and easiest ways to reload a revolver. They are the same shape as the cylinder and are used by matching up the rounds with the cylinder slots and either twisting the end or hitting a button to release the rounds into the revolver. Mastering rapid and efficient reloads with speedloaders is one of the easiest parts of shooting a revolver for many shooters. However, because of their shape, speedloaders present a slightly bulky carry option.

Safariland’s Comp I is the best example of a concealment-based speedloader since it is operated by a small knob that is twisted to drop the rounds into the chamber. The Comp II has a medium-sized knob that is easier to lock closed than the Comp I, but provides a bit more bulk. The Comp III is the largest of Safariland’s speedloaders and has a long handle that is pressed to eject the rounds into the chamber.

There is no “better” or “worse” when it comes to different types of speedloaders; it’s a matter of what is available for the firearm in question and what works for a certain concealment style. Obviously, the smaller Comp Is are going to be the easiest to conceal, but those with larger hands may find them difficult to use, and they may not be available for certain guns.

There are several ways to carry speedloaders and keep them close at hand. Speedloader holders can be purchased and worn on the belt for those with loose cover garments who prefer an empire-waist blouse to conceal their firearm and have the room on their belt to effectively conceal more items. Different kinds of speedloader holders are available depending on the amount of retention and the additional bulk desired. 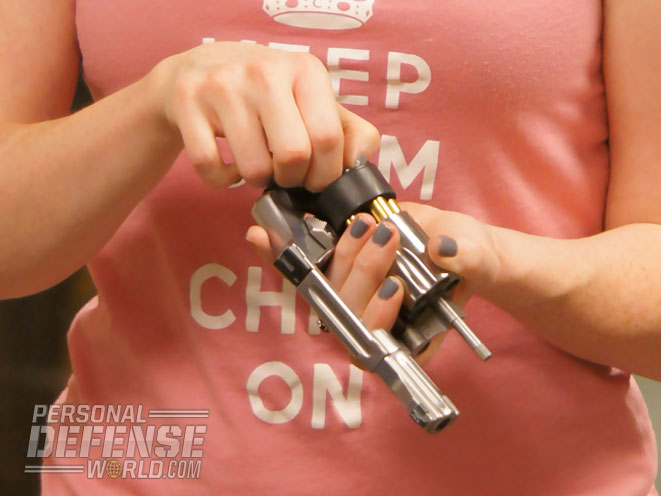 Metal speedloader holders often don’t provide much retention since the speedloader sits it the metal and is simply held by the tension on the top of the clip. These types of holders are most commonly used in competition and are not recommended for concealed carry.

Leather holders are also available for speedloaders. These act as a well-sculpted pouch for the loaders to sit in, and often are held closed by a flap at the top that snaps shut. While these provide more retention, they are also bulkier and slower to access than the metal clip-style holders.

Alternatively, speedloaders can be carried loose in a pocket or an off-the-body bag such as a purse or laptop case. While these methods are easier, there are risks associated and steps that should be taken to minimize problems in a potential defensive situation.

Speedloaders that are kept loose in a compartment should be kept there alone. Other items could interfere with quick acquisition of the speedloader or possibly knock the rounds out of it. Smaller objects can also get stuck between the rounds, preventing a reload from being preformed without first removing the objects.

A more concealable but slower-to-use option for carrying extra ammunition for a revolver is the speed strip, such as Tuff Products Quick Strips, a piece of rubber that holds five or more rounds linearly. Speed strips are used by placing the rounds into the chamber two at a time and bending the strip back to release them. Speed strips are not as quick to deploy as speedloaders since the rounds are loaded two at a time rather than the entire cylinder at once. With practice, however, speed strips can be deployed quickly, but they take more finesse than speed loaders.

Because of the size of speed strips, they are easy to conceal. However, like the speedloaders, they present the same problems with being placed in pockets or off-the-body carry bags. It’s easy for smaller items to get trapped between the rounds on a speed strip as well, and it’s also possible for them to get stuck on a lip coming out of a pocket.

Holsters are also available for the Tuff Quick Strips. These pouches attach to a belt and simply hold the strips in place under a snap or Velcro flap. There are different materials, sizes and capacities available depending on the wearer’s preference. These pouches are much lower profile than the larger speedloaders and their bulkier holsters, and can be easily concealed on the belt under tighter shirts or cover garments.

For those who have more time to practice their loading techniques and are interested in wearing fashions that prohibit the carrying of bulkier speedloaders, Tuff’s Quick Strips present a viable option for a relatively quick reload in an easy-to-conceal package. 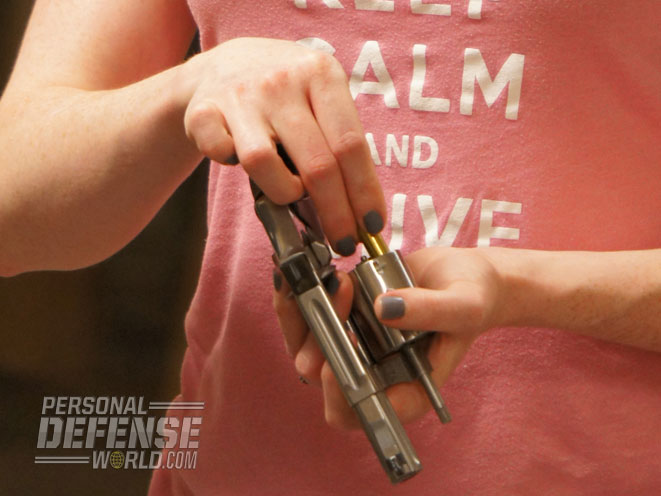 Carrying loose rounds is a much more viable option for those who carry a revolver than those that carry semi-automatic handguns. Dropping six rounds into the chamber is a lot easier than loading another magazine, especially under pressure.

RELATED: The Best Ways To Carry Backup Ammo For Your Wheelgun

Loose rounds are extremely easy to conceal, quick and not a bit bulky. However, there are drawbacks to carrying extra ammunition this way rather than in a speedloader or speed strip. First of all, loading loose rounds into a revolver can be especially difficult in a stressful situation, when adrenaline could cause shaky hands and deteriorate the motor skills and hand-eye coordination necessary to stuff a round into a chamber, especially with smaller caliber guns. Next, loose rounds of ammunition can be difficult to fish out of the pocket they are kept in, regardless of whether they’re kept on or off the body.

Throwing loose rounds in a purse or an off-the-body bag presents risks all its own. Not only is it possible that your bag won’t be in hand when necessary, but the loose rounds could get lost in the larger pockets of the bags. If using a bag, instead of a pants pocket, it’s important to always store the rounds in the same spot so that accessing them becomes natural and they don’t get lost in the bottom of the bag.

Choosing a spare ammunition carry method when carrying a revolver can affect both your fashion style and training style. It’s important to be aware of your own limitations and practice whatever carry style you choose. Easier to use but bulkier options may be the best way to go if you don’t have as much time to train, but the ease of concealment of spare ammunition through speed strips or speedloaders may make the extra training time to quickly and safely use those devices worthwhile.