2 of 8
Photo by Steve Woods
Sights
The two-dot, windage adjustable rear sights are dovetailed into the slide.

3 of 8
Photo by Steve Woods
front rights
The front post sight is pinned to the slide and remarkably easy to acquire—even under stressful situations.

4 of 8
Photo by Steve Woods
firing system
The DB380 has a unique zero-energy striker firing system.

6 of 8
Photo by Steve Woods
frontstrap
The serrated frontstrap helps provide a solid grip for quick follow up shots.

8 of 8
Photo by Steve Woods
grips and recoil
The high grip angle helps tame recoil, while the front and rear slide serrations aid with operation.

They say that the best gun to have in a fight is the gun you have with you. It takes a fair amount of discipline and commitment to carry a mid to full-size gun and keep it concealed day in and day out through all four seasons. This is the big reason why micro-compact pocket .380 ACP pistols are so popular.

I have been carrying different pocket pistols for 15 years, both revolvers and autos. I decided a few years ago that autos are just more concealable and easier to carry in a pants pocket without printing as much (where the silhouette of the gun is clearly visible through the pocket material). For this reason I was especially enthused to check out a new pocket pistol from Diamondback Firearms.

At first glance the Diamondback DB380 pistol looks like a miniaturized Glock, and it does undeniably share many of the features of that pistol. The Diamondback, however, provides shooters with a unique pocket pistol with its own distinct footprint.

The DB380 is a double-action-only, locked breech, recoil-operated, striker-fired gun with 6+1 capacity. To my knowledge, the Diamondback and the more expensive Kahr P380 are the only currently available true striker-fired, hammerless (not hidden hammer) .380 ACP pocket pistols. At 8.8 ounces empty (minus magazine) the Diamondback is also more than an ounce lighter than the Kahr. Its dimensions of 0.75 of an inch in width, 5.24 inches in length and 3.77 inches in height, place the Diamondback firmly in the same ballpark with the Kahr P380 and Kel-Tec P3AT size wise.

The frame is a glass-reinforced polymer and barrel and slide are made from billet 4140 through-hardened steel, meaning that these parts are machined out of a solid block of chrome-moly steel. Made entirely in the U.S., the DB380 has a patent pending “zero-energy” striker firing system. Unlike other striker systems, which partially cock the striker mechanism when the action closes, the Diamondback does not preload the striker and the trigger does all the work. With this system, if there were any failure there is no stored energy in the striker and thus less chance of it sending the firing pin into a primer.

The pistol also includes a firing pin block, which blocks the firing pin from going forward unless the trigger is fully depressed. This helps to prevent accidental discharges. The steel trigger with dual connecting bars has a half-inch length of pull and a factory advertised weight of 5 pounds, but the sample I received measured between 6 and 7 pounds. No complaints here however, since a slightly heavier trigger adds a degree of extra safety and did not affect the gun’s accuracy in any perceptible way.

The magazine catch, trigger and rails are all chrome-moly steel and black oxide coated. The trigger parts and the standard black slide are melonite coated for extra hardness and durability. Slides come in three options, melonite, nickel, and EXO.

Diamondback has just started to offer EXO-coated slides (by UCT Coatings) as an option, which offers “permanent” protection and according to the manufacturer “provide permanent lubrication so you’ll never need to oil your slide.” EXO is a patented, nodular nickel-boron (NiB) surface treatment, which helps dissipate heat and hardens the surface of the slide. It is also reportedly easier to clean, and more wear and corrosion resistant.

The barrel and internal parts are also hard coated to resist corrosion. The closed design of the DB380 at the back of the slide also helps prevent pocket lint from entering the gun. The slide also features nicely scalloped forward and rear grasping grooves to ease operation.

The steel magazine latch certainly seemed durable and is set at a very low profile to prevent accidentally depressing it and ejecting the magazine — something to consider in a pocket gun. If anything I found the magazine release to be a bit difficult to operate and sometimes even when positively depressed the magazine would not come out on the first try. No quick magazine changes possible here, but again pocket guns usually only come with one magazine for a reason.

I was, however, more impressed with the sights provided. These are polymer and very usable, if small, sights. The rear sights are two-dot, dovetailed into the slide and are windage adjustable. The front sight offers a plainly visible white post and is pinned into the front of the slide. Proper sight picture was easily and quickly acquired.

One outstanding design element in the DB380 is in its frame, which is designed to give the shooter as high a grip angle as possible. This places the shooters hand much more inline with the axis of the barrel and provides far greater control, reducing muzzle flip and perceived recoil significantly. The frame is also designed to provide slightly more grip to hold onto with a longer back strap. The smallish, squared triggerguard also provides a slightly longer frontstrap, which is aggressively checkered, without increasing the overall size of the gun.

A lot of attention to detail has been spent smoothing all sharp angles on the entire gun and narrowing areas in the front of the muzzle and triggerguard to ease holstering. A prominent extension on the top of the backstrap also helps the shooter ensure a proper high grip without interfering with the slide operation. Slight right and left thumb rests provide good memory pads for the hands as well.

To disassemble, simply remove the magazine and ensure that the chamber is empty. Pointing in a safe direction, squeeze the trigger to release the striker tension. Holding the slide slightly back approximately 0.25 of an inch, grasp and pull the two serrated sides of the assembly catch downward and then push the slide forward. The dual telescoping recoil springs inside the slide are extremely effective but make for a stiff slide, combined with a very small assembly catch, it may take a couple of tries to get the hang of the disassembly.

On the range I found the Diamondback to be one of the most pleasant .380 ACP pocket pistol I have ever shot. However it is still a pocket pistol and I found 100 rounds to be my limit for one day. Shooting a mix of ammunition both from the bench and offhand at various distances, I found that the Diamondback shot a bit low. At 7 yards it was placing very tight groups about 3 inches low, and at 15 yards at about 5 inches low. I fired a few at 25 yards and it was about 10 inches low at that distance.

According to Diamondback the pistol is set to shoot in a tactical “on target” fashion, with the front sight covering the target, not underneath it as most people target shoot. The company will raise the sight profile for future models so that it fires point-of-aim.

I also experienced three failure-to-feeds and one stovepipe, but interestingly only with FMJ range ammunition. Hollow point self-defense loads produced no malfunctions of any sort. The folks at Diamondback explained that their guns are designed to work best with self-defense ammunition. The stiff recoil springs also require a good grip when firing to prevent limp-wristing the gun, which can be a cause of malfunctions.

Still I could not question the accuracy of the DB380, and my best bench rest group measured under an inch at 7 yards. Offhand shooting was more pleasant and also achieved good groups and accuracy.

In addition to the range testing I also opted to carry the Diamondback for a week as my main personal defense concealed carry gun. The folks at BlackHawk were kind enough to send one of their ambidextrous nylon inside-the-pocket holsters for the trial period. This holster proved an excellent companion to the DB380, completely masking the outline of the gun to avoid printing and keeping the gun in a grip-up position even in baggy pants. A tacky strip of non-slip material surrounds the holster and helps keep it in the pocket when the gun is drawn.

As an NRA certified instructor, I often have students who are primarily interested in concealed carry. I had the opportunity to let several of my students, both beginners and experienced, men and women, try the Diamondback DB380 after our pistol class. They all found it to be a pleasant and accurate gun to shoot with only moderately more perceived recoil than a full-sized 9mm. For my part I think I found my new concealed carry gun. 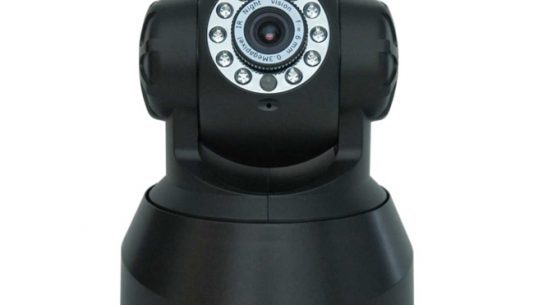 Monitoring your home has never been easier with LockState's new LS-PTC300 Pan/Tilt Camera.